SHE0
END14 hours ago

I would like to thank you here for your audience in yet another Serie A match. Stay tuned here for the repercussions of this game. Have a good afternoon, and see you next time!
1:03 PM2 months ago

Lazio return to the field on Thursday (21), when they host Olympique Marseille in the Europa League. Inter play against Sheriff on Tuesday (19), in the Champions League.
Standings provided by SofaScore LiveScore
12:58 PM2 months ago

Lazio beat Inter 3-1 in a come-from-behind victory to get back in the competition! And after the final whistle: more confusion and fights among players! And Luiz Felipe was sent off!
12:52 PM2 months ago

From Luis Alberto's free-kick from the right, Milinkovic-Savic was higher than the defense and headed the ball into the back of the net!
12:51 PM2 months ago

Yellow for Darmian, for a foul on Lazzari on the right. And we will have six more minutes of extra time.
12:50 PM2 months ago

Immobile hit the ball from outside the box and sent it into the hands of Handanovic.
12:48 PM2 months ago

Correa is yellow carded for a foul in the attack field.
12:47 PM2 months ago

Immobile received the ball on the left and hit it hard to the defense of Handanovic, who deflected it into the middle where Felipe Anderson was to put it in the back of the net. And there was confusion after the goal because there was an Inter player on the ground in pain and Lazio didn't play the ball out! There were yellow cards for Milinjovic-Savic, Felipe Anderson, and Lautaro Martinez. After the goal, Lucas Leiva and Felipe Anderson left for Cataldi and Akpro. And in Inter left Barella to the entry of Çalhanoglu.
12:41 PM2 months ago

On the left cross Immobile deflected it with the tip of his foot and Handanovic fetched it on the left.
12:36 PM2 months ago

Substitution in Lazio: Pedro left and Zaccagni came in. At Inter: out went Dzeko and in came Lautaro Martínez.
12:27 PM2 months ago

Double substitution in Lazio: Basic and Hysaj left for Lazzari and Luis Alberto. And at Inter there were three: Perisic, Bastoni and Gagliardini went out to Correa, Dumfries and Vecino.
12:25 PM2 months ago

Immobile hit it firmly, into the left corner, while Handanovic went to the right, tying the game!
12:24 PM2 months ago

In the corner coming from the left there was a hand touch from Bastoni, thus making the penalty kick for Lazio! Bastoni is yellow carded and now Lazio have a chance to equalize!
12:21 PM2 months ago

Milinkovic-Savic hit a shot from outside the box and sent it through the right side of the goal.
12:05 PM2 months ago

Dzeko makes his first touch on the ball and it rolls into the second half of the match!
12:05 PM2 months ago

The players appear on the field to start the second half of the match.

In a hectic first half, Perisic opened the scoring early and Inter goes on to beat Lazio away from home!
11:47 AM2 months ago

Pedro, with a deflection, hit it from outside the area and sent it to the right side of the goal!
11:44 AM2 months ago

Basic hit the ball hard from outside the area and sent it into the hands of Handanovic!
11:40 AM2 months ago

Yellow card to Gagliardini, for a tackle on Lucas Leiva in midfield.
11:39 AM2 months ago

Felipe Anderson carried the ball from the right into the middle and hit it hard, but into the hands of Handanovic.
11:38 AM2 months ago

Brozovic received the ball in the middle and played it to Perisic, who hit the ball hard and forced Pepe Reina to palm the ball away!
11:37 AM2 months ago

In another cross from the right, Immobile was now the one who went up and headed, but it went to the left side of the goal.
11:31 AM2 months ago

Yellow card to Basic, for bringing down Barella in midfield on a counterattack.
11:28 AM2 months ago

Felipe Anderson crossed from the right, low, for Basic to get a shot and Handanovic to save Inter!
11:16 AM2 months ago

Perisic went for the ball and hit it hard and firm, into the left corner, while Pepe Reina came out to the right, with no chance of a save!
11:15 AM2 months ago

Barella invaded the area on the right and was brought down by Hysaj, earning Inter the penalty!
11:14 AM2 months ago

Felipe Anderson crossed and the defense took it away, but Lucas Leiva shot hard from outside the area and sent it over the goal!
11:05 AM2 months ago

Perisic crossed in the box and Dzeko headed, but over the goal.
11:04 AM2 months ago

Immobile makes the first touch on the ball and it rolls into the first half of the match!

The teams appear on the field to start the match!
10:40 AM2 months ago

The players leave the pitch to finish their preparation and then return to the field for the ball to roll!
10:36 AM2 months ago

The other big match of the weekend is between Juventus and Roma. Closing the round on Monday is Venezia's game against Fiorentina.
10:36 AM2 months ago

The round started yesterday, with Spezia beating Salernitana 2-1. Today we still have Milan and Verona.

Internazionale is lined-up and will take the field with: 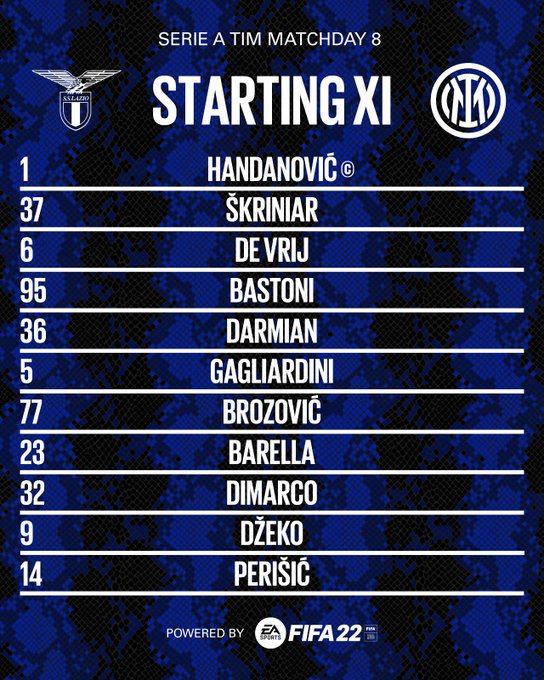 Lazio is lined-up and will take the field with:

Now begins the broadcast of the Serie A match between Lazio and Internazionale!

Do not miss a detail of the match with the live updates and commentaries of VAVEL. Follow along with us all the details, commentaries, analysis and lineups for this Lazio vs Internazionale match.
9:56 AM2 months ago

How to watch Lazio vs Internazionale Live in TV and Stream

If you want to watch the game Lazio vs Internazionale live on TV, your options is: none.

What time is Lazio vs Internazionale match for Serie A?

This is the start time of the game Lazio vs Inter of 16th June 2021in several countries:

Inter beat Lazio 3-1 on February 14, with two goals from Lukaku and one from Lautaro Martínez, while Milinkovic-Savic scored. 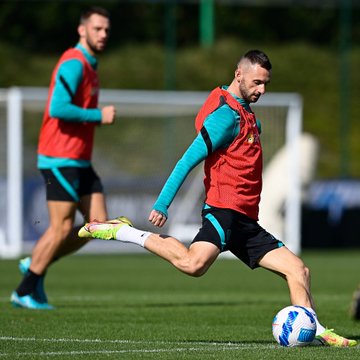 Sarri will have the return of the injured Zaccagni and Immobille, having almost full strength, because Acerbi will serve a suspension for a red in the last match. Inter will be able to count on Lautaro and Correa, both called up and who played on the FIFA date. Sensi, who had a knee injury, may return.
9:26 AM2 months ago

Lazio and Inter are at the top of the table. Lazio are in the block of teams with 11 points, sixth, followed by Juventus, Atalanta, and Bologna. Inter are on 17 points, in third position, two behind AC Milan and two ahead of Roma.
9:21 AM2 months ago

Inter arrived after a draw and a win in their last two games. On September 28, against Shakhtar, away from home in the Champions League, they drew 0-0. And away, in Serie A, against Sassuolo, on October 2, Inter won 2-1, with Berardi opening the scoring, Dzeko equalizing, and Lautaro Martínez turning the match around.
9:16 AM2 months ago

Lazio come in after a win and a loss in their last two games that took place before the FIFA date. The victory was in the Europa League, on September 30, against Lokomotiv Moscow, at home, by 2-0. Basic and Gabarrón scored the goals of the match. In Serie A, on October 3, they lost to Bologna, 3-0, with goals from Barrow, Theate, and Hickey.
9:11 AM2 months ago