I would like to thank you here for your audience in another First LIga match. Stay tuned here for the repercussions of this game. Have a good afternoon and see you next time!
1:54 PMa month ago

Porto takes the field on Tuesday (26), when they face Santa Clara, for the League Cup. Tondela plays on Friday (29), for the First League, visiting Arouca.
1:52 PMa month ago

With Taremi's hattrick, Porto wins away to Tondela and sleeps as Primeira Liga leader!
1:44 PMa month ago

Substitution in Tondela: Neto Borges and Salvador left and Barbosa and Khacef came in.
1:43 PMa month ago

Substitution in both teams. In Tondela left Murilo and Tiago Almeida for the entry of Manu Hernando and Bebeto. In Porto left Otávio and Luis Díaz to the entry of Pepê and Francisco Conceição.
1:39 PMa month ago

Taremi received a pass through the middle from Fábio Vieira and beat Triguera with a corner kick, scoring his third goal of the match!
1:34 PMa month ago

Otávio managed to head a cross from the right and sent it over the goal! And we have a substitution at Porto: Vitinha and Evanilson left for Sergio Oliveira and Fábio Vieira.
1:32 PMa month ago

Another yellow: this time for Otávio, for not letting Tondela get away with a foul in the backfield.
1:29 PMa month ago

In the area Luis Díaz returned the ball to the middle, where Marcano put it into the net, but he was offside and the goal was disallowed.
1:18 PMa month ago

Substitution in Porto: Zaidu left and Corona came in.
1:15 PMa month ago

Salvador hit the free-kick hard and hit the barrier.
1:13 PMa month ago

Yellow card for Pepe, for a foul on the edge of the area when he fumbled the ball! Diogo Costa is in danger!
1:10 PMa month ago

In a cross coming from the left, there was a touch of the arm in the middle of the area, but after review by the VAR the shot was not considered a penalty.
1:04 PMa month ago

Dadashov makes the first touch on the ball and it rolls into the second half of the match!
1:04 PMa month ago

The teams are returning to the field to start the second half of the match!

Tondela even opened the scoring, but Taremi shone and turned the match, which now goes to halftime!
12:44 PMa month ago

Yellow card to Uribe, for a foul on the top, leaving his arm.
12:43 PMa month ago

Uribe hit the free-kick hard on the ground, Triguera sprawled and released the ball at the foot of Taremi, who put it into the back of the net, turning the match!
12:41 PMa month ago

Luis Díaz risked his shot from outside the area and sent it past Triguera's right side.
12:28 PMa month ago

Undabarrena stopped a move on the edge of the box, after a mistake by the defense, and was shown a straight red card!
12:22 PMa month ago

Yellow card to João Pedro, for a foul in the midfield.
12:19 PMa month ago

João Mário's low cross from the right to the middle was met by Taremi, who put the ball in the back of the net to equalize the match!
12:16 PMa month ago

Evanilson, on the deflection inside the area, forced Triguera to save the ball away!
12:14 PMa month ago

Yellow card to Evanilson, for a high foul, where he left his arm on the defender.
12:12 PMa month ago

Yellow card to Sagnan, for a foul on Taremi on the edge of the area. Vitinha hit it and sent it over the goal.
12:09 PMa month ago

On João Mário's cross, Taremi went high and headed over the goal.
12:04 PMa month ago

In Salvador's early free-kick from the left, Neto Borges got the deflection on the edge of the small area and sent it to the left corner of goalkeeper Diogo Costa, who could do nothing!
12:00 PMa month ago

Taremi makes the first touch on the ball and it's off to the first half for Tondela and Porto!
11:57 AMa month ago

The players leave the field to continue their preparation and soon return to the field for the ball to roll! 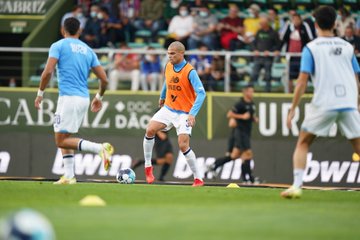 And closing the round, on Monday, Gil Vicente plays against Braga and Boavista faces Belenenses.
11:36 AMa month ago

Tomorrow, Vizela will host Benfica and Portimonense will play against Estoril.

The players appear on the lawn to start the warm-up work.

Tondela has been selected and will play with: 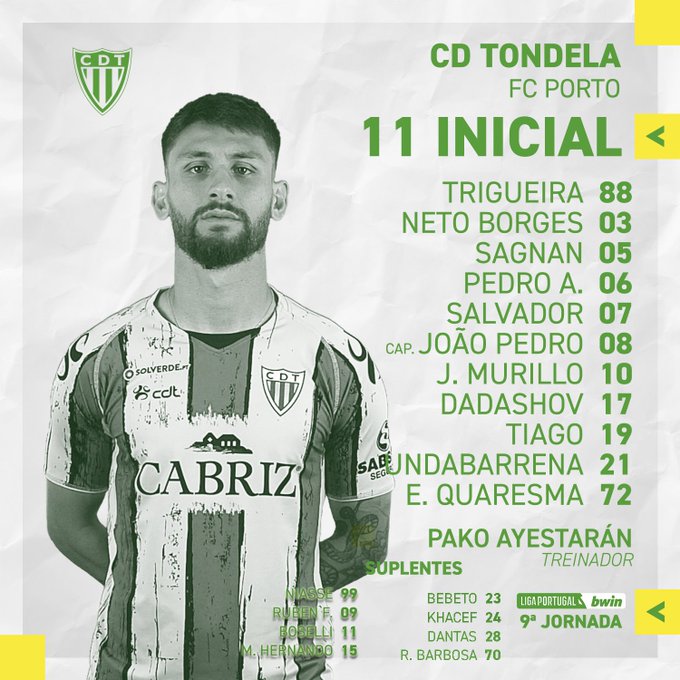 Porto has been selected and will play with: 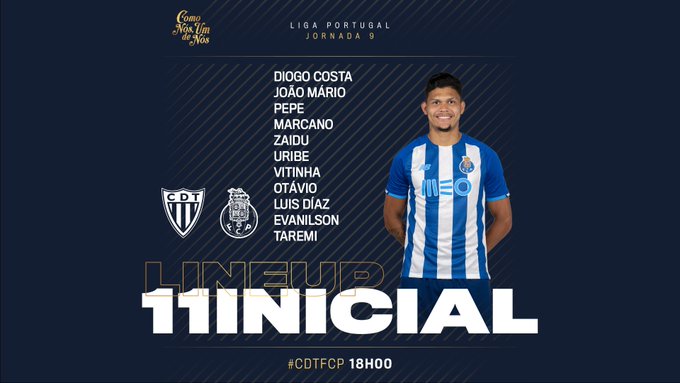 Now begins the broadcast of the Primeira Liga match between Tondela and Porto!

Do not miss a detail of the match with the live updates and commentaries of VAVEL. Follow along with us all the details, commentaries, analysis and lineups for this Tondela vs Porto match.
10:55 AMa month ago

How to watch Tondela vs Porto Live in TV and Stream

If you want to watch the game Tondela vs Porto live on TV, your options is: none.

If you want to directly stream it: Streaming services and GolTV Español app.

What time is Tondela vs Porto match for Primeria Liga?

This is the start time of the game Tondela vs Porto of 23th of October 2021 in several countries:

Fábio Veríssimo will referee the match, with assistant referees Bruno Jesus and Pedro Martins. Rui Costa will be in charge of VAR.
10:40 AMa month ago

The probable Porto team for the match is: Marchesin, Corona, Pepe, Mbemba and Sanusi; Otavio, Oliveira, Uribe and Luis Díaz; Martinez and Evanilson. 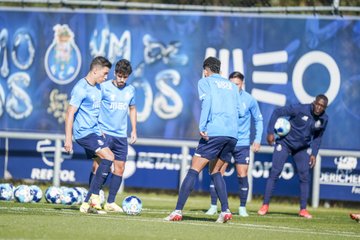 The probable Tondela for the match is: Niasse, Borges, Manu, Khacef and Almeida; Undabarrena, Augusto and Pedro; Murillo, Agra and Dadasov.
10:30 AMa month ago

The Tondela still can not use Jota Gonçalves for the match, with the midfielder still injured in the knee. Porto will also be missing a knee injury: Wendell. Besides him Taremi is suspended and out of the match.
10:25 AMa month ago

Porto is in second position, with 20 points, tied with Sporting and one point behind leader Benfica. Tondela is tenth, with nine points, along with Gil Vicente and Paços de Ferreira.
10:20 AMa month ago

Porto is also coming from two wins. Last Tuesday (19), against Milan, in the Champions League, the victory was 1-0, with a goal by Luis Diaz. Before that, on Friday (15), the victory was for the Portuguese Cup, against Sintrense, by 5-0, with goals from Sérgio Oliveira, Evanilson (3) and Martínez.
10:15 AMa month ago

Tondela comes from two wins in the last two matches it played. For the Portuguese Cup, against Camacha, last Saturday (16), the victory was 2-1. Hernando opened the scoring for Tondela, while Gabriel Fraga tied and, in the 53rd minute, Salvador Agra scored the winning goal for Tondela. Before that, in the Primeira Liga, against Belenenses, the victory was 2-0, with goals from Pedro Augusto and John Murillo.
10:10 AMa month ago