SHE0
END14 hours ago

Thank you for listening to another Benfica match here on VAVEL. Have a good afternoon and see you next time!
2:05 PMa month ago

Vizela back on the field on Sunday (31), when they face Famalicao in the First League. Benfica returns to the field on Wednesday (27), when he faces the victory, for the League Cup.
Standings provided by SofaScore LiveScore
2:02 PMa month ago

In the HEAVY shirt, in the sweat and believing until the last throw, Benfica wins in the end and returns to the leadership of the championship with Rafa Silva's goal!
2:00 PMa month ago

IN THE LAST SHOT! Down the right Radonjic crossed low and hard and Rafa Silva was there to put the ball in the back of the net, opening the scoring!
1:59 PMa month ago

Samu hit the ball hard from outside the area and sent it into the hands of Odysseas!
1:58 PMa month ago

Yellow card for Otamendi, for a foul on the left.
1:55 PMa month ago

Substitution in Vizela: left Nuno Moreira and Méndez and entered Cann and Wilson.
1:52 PMa month ago

Zag's strong shot from outside the area and the right side of the goal is very dangerous! And we will have SEVEN more minutes of extra time.
1:49 PMa month ago

Cebolinha charged and found Taarabt, who hit hard and sent it into the hands of Charles, who got it in two strokes!
1:46 PMa month ago

Rafa Silva received the ball after a shot from the edge of the area by Gonçalo Ramos, keeping it and putting it in the back of the net, but he was offside, thus disallowing the goal.
1:40 PMa month ago

Substitution in Vizela: out Claudemir and in Zag.
1:32 PMa month ago

Yellow card to Lucas Veríssimo for a hard foul in the midfield.
1:28 PMa month ago

Igor Julião received the ball on the right and finished weakly, in the hands of Odysseas.
1:27 PMa month ago

Substitution in Vizela: Schettine left and Bondoso came in.
1:23 PMa month ago

Weigl tried his shot from outside the area and sent it over the goal.
1:18 PMa month ago

Nuno Moreira tried to shoot and sent it to the right side of the goal, without danger.
1:13 PMa month ago

Diogo Gonçalves crossed from the right and Darwin Núñez headed hard, but Charles saved Benfica once again!
1:11 PMa month ago

Diogo Gonçalves once again tried the cross and Charles took the ball off Yaremchuk's head! In the sequence Weigl hit a long shot, in the hands of the goalkeeper.
1:07 PMa month ago

Schettine makes the first touch on the ball and it rolls into the second half!
1:06 PMa month ago

The players appear on the pitch to start the second half of the match!

Without a goal, Vizela and Benfica go to halftime with the match tied!
12:45 PMa month ago

Aidara is yellow-carded for a foul on Darwin Núñez on the left. In the free-kick the Vizela defense took it away without problems.
12:41 PMa month ago

With Marcos Paulo's shot from outside the area, Odysseas saved Benfica!
12:32 PMa month ago

On Grimaldo's cross, Vertoghen headed dangerously from the right side, but out!
12:32 PMa month ago

Rafa Silva raised in the area, Ivanildo took it from there and Diogo Gonçalves hit it hard to the goal, where Charles sprawled over the goal!
12:25 PMa month ago

Schettini received inside the area, turned and hit hard, but Odysseas sprawled and got it on the rebound!
12:22 PMa month ago

Vizela doesn't get scared or drown in the match, going up against Benfica, despite the visitors having more possession. But the only thing is: no chances until then.
12:10 PMa month ago

Odysseas was about to make a huge mistake by going out wrong and Schettini hit him, with the ball going to the corner!
12:01 PMa month ago

Yaremchuk gives the first touch and the match between Vizela and Benfica begins!
11:58 AMa month ago

Tomorrow we close the round. Gil Vicente faces Braga and Boavista plays against Belenenses.
11:36 AMa month ago

Also yesterday we had Porto 3-1 over Tondela, taking the lead and Sporting beating Moreirense 1-0.
11:30 AMa month ago

Vizela is scheduled to play with: 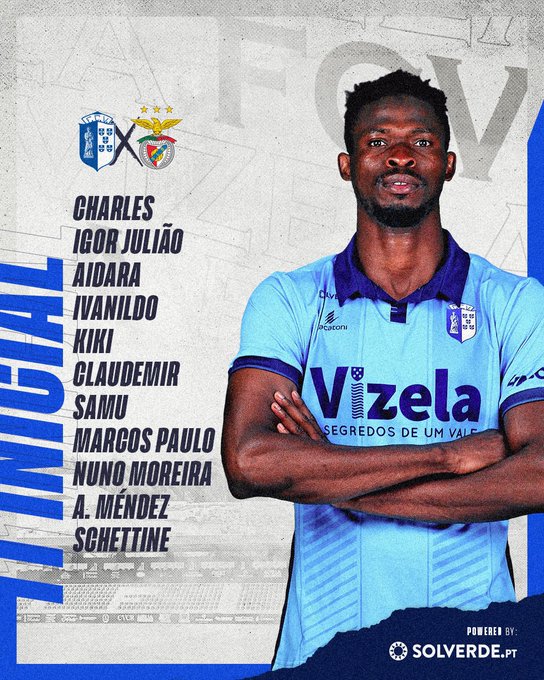 Benfica is scheduled to play with: 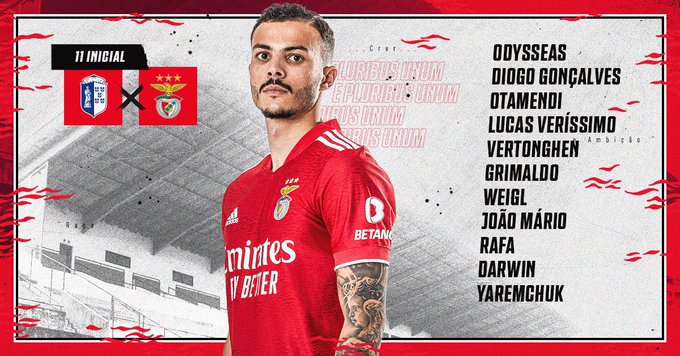 Now begins the broadcast of the match between Vizela and Benfica, valid for the Primeira Liga!

Do not miss a detail of the match with the live updates and commentaries of VAVEL. Follow along with us all the details, commentaries, analysis and lineups for this Vizela vs Benfica match.
11:02 AMa month ago

How to watch Vizela vs BenficaLive in TV and Stream

If you want to watch the game Vizela vs Benfica live on TV, your options is: none.

If you want to directly stream it: Streaming services and GOLTV, RTPi, GolTV Español app.

What time is Vizela vs Benfica match for Primeira Liga?

This is the start time of the game Vizela vs Benfica of 24th October 2021  in several countries:

Luís Godinho will referee the match, with Rui Teixeira and Valter Rufo as assistants. Luís Ferreira will be the VAR commander.
10:47 AMa month ago

Vizela will not be able to use only Pedro Silva, injured, while Benfica's list of injured players is extensive: Seferovic, André Almeida, Lázaro, Gedson Fernandes and Rodrigo Pinho.
10:32 AMa month ago

Benfica is in third place with 21 points, two behind Sporting and Porto, which is second and first respectively. Vizela is in 12th place with eight points, one behind Gil Vicente, Tondela and Paços de Ferreira, and one in front of Marítimo and Moreirense.
Standings provided by SofaScore LiveScore
10:27 AMa month ago

Benfica comes from defeat and victory. Against Trofense, for the Portuguese Cup, the victory was 2-1, with Everton and André Almeida scoring, while Luiz Pachu decreased, last Saturday (16). And against Bayern, last Wednesday (20), for the Champions League, came the defeat, by a score of 4 to 0, with goals from Sané (2), Everton Cebolinha (against) and Lewandowski.
10:22 AMa month ago

Vizela comes from victory and draw in the last two games. For the Portuguese Cup, Vizela beat Vitoria de Setubal 2-0 last Sunday (17), with goals from Alex Mendez and Guilherme Schettine. And before that, on October 2, came the tie with Santa Clara, with Jean Patric opening the scoring for Santa Clara and Cassiano tying for Vizela at 52nd of the second half.
10:17 AMa month ago