It's over! Mexico falls to Ecuador at the Bank of America.
9:50 PMa month ago

Cervantes misses a clear shot on goal.
9:48 PMa month ago

Zendejas tries, but crashes the ball into the defense, then Lira appears, but sends the ball wide.
9:43 PMa month ago

Double change for Ecuador. Andres Lopez and Michael Estrada are replaced by Joshue Quiñonez and Danny Cabezas.
9:35 PMa month ago

Goal, goal for Ecuador! After a cross, Chala appeared to push the ball in and put Ecuador ahead.
9:35 PMa month ago

How close! Eduardo Aguirre took advantage of the goalkeeper's advanced position and sent a long-range shot that almost became a goal.
9:31 PMa month ago

Mexico looks for the third to take the lead.
9:26 PMa month ago

Changes in Mexico. Alejandro Zendejas and Eduardo Aguirre are substituted for Uriel Antuna and Santiago Giménez.
9:24 PMa month ago

Changes in Ecuador. Julio Ortíz and Janner Orozco are replaced by Reasco and Caraballi.
9:23 PMa month ago

Giménez's shot, but Galindez holds the ball.
9:19 PMa month ago

Goal by Mexico! Osvaldo Rodriguez blasts a shot from outside the box to tie the score.
9:14 PMa month ago

Giménez's shot hits the outside of the net.
9:12 PMa month ago

The game started off quite lively with the ball being contested by both teams.
9:06 PMa month ago

The complement starts at Bank of America.
9:06 PMa month ago

Changes in Mexico. Kevin Álvarez and Rodolfo Cota are substituted for David Ramírez and Jonathan Orozco.
8:47 PMa month ago

First half ends with the score in favor of Ecuador.
8:41 PMa month ago

Ramirez correctly intercepted Corozo, who was generating a lot of danger.
8:33 PMa month ago

Giménez receives the ball inside the area, but he fails to control it and the defense anticipates to take the ball away from him.
8:31 PMa month ago

The match is quite tight in the midfield.
8:21 PMa month ago

Good cross by Rodriguez, but the defense ends up deflecting it.
8:15 PMa month ago

Goal, goal for Ecuador! Great play by Corozo who ends up shooting into the back of Orozco's goal.
8:14 PMa month ago

The match is quite hard fought, both teams are looking for the second goal.
8:06 PMa month ago

Goal, Mexico goal! Roberto Alvarado took advantage of a ball from Giménez and scored to tie the match.
8:02 PMa month ago

Goal, goal, goal for Ecuador! Jhonny Quiñonez puts La Tri ahead with a blast into Orozco's goal.
8:01 PMa month ago

The match between Mexico and Ecuador gets underway.
7:57 PMa month ago

The tricolor has arrived

With Gerardo Martino at the helm, Mexico is already in Charlotte, ready for another duel.
7:41 PMa month ago

To be fully prepared

This morning, prior to the match, the Ecuadorian team performed physical activation in order to get in good physical condition. 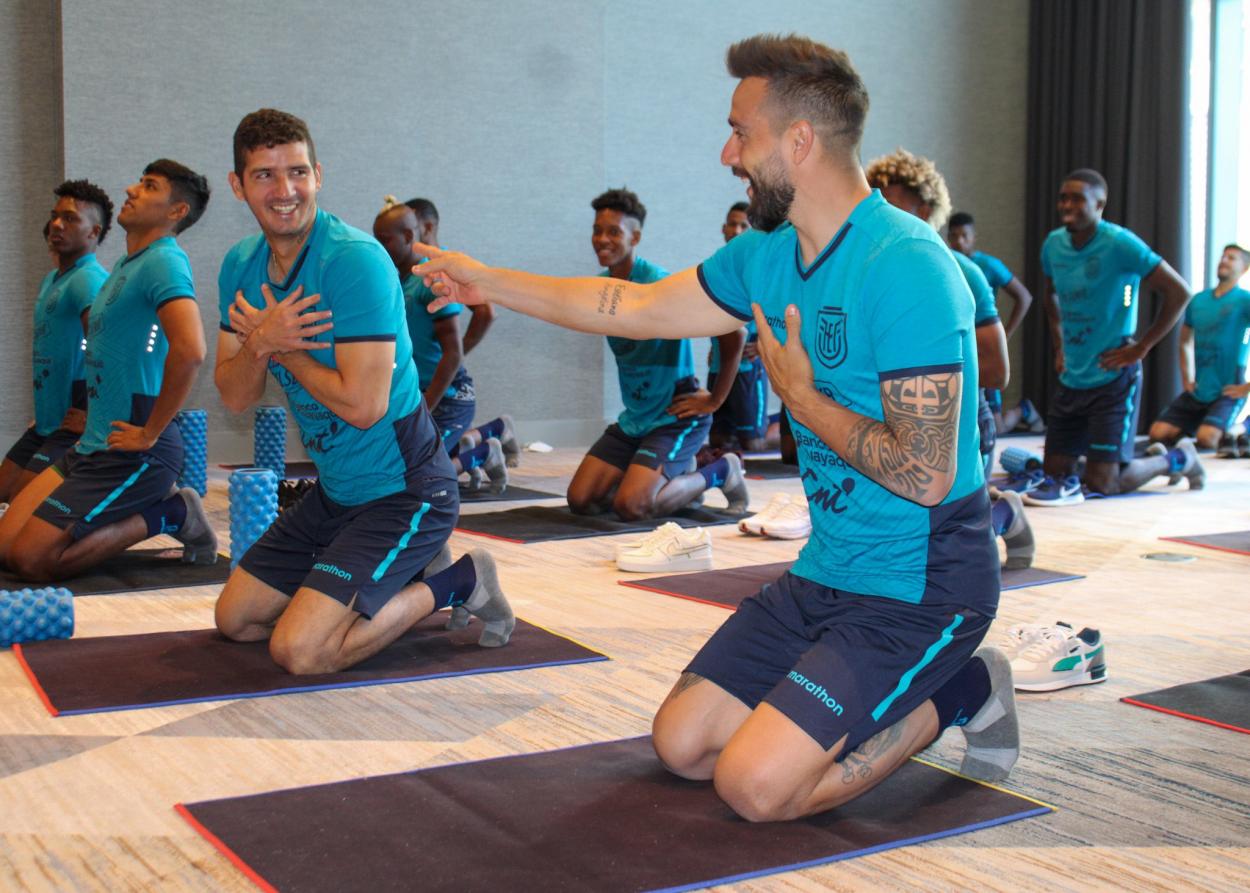 Mexico and Ecuador met for the last time in 2019, a friendly match in which Martino's team won 3 goals to 2 in Dallas.
7:21 PMa month ago

This will be the jersey that the Mexican National Team players will wear tonight to face Ecuador. 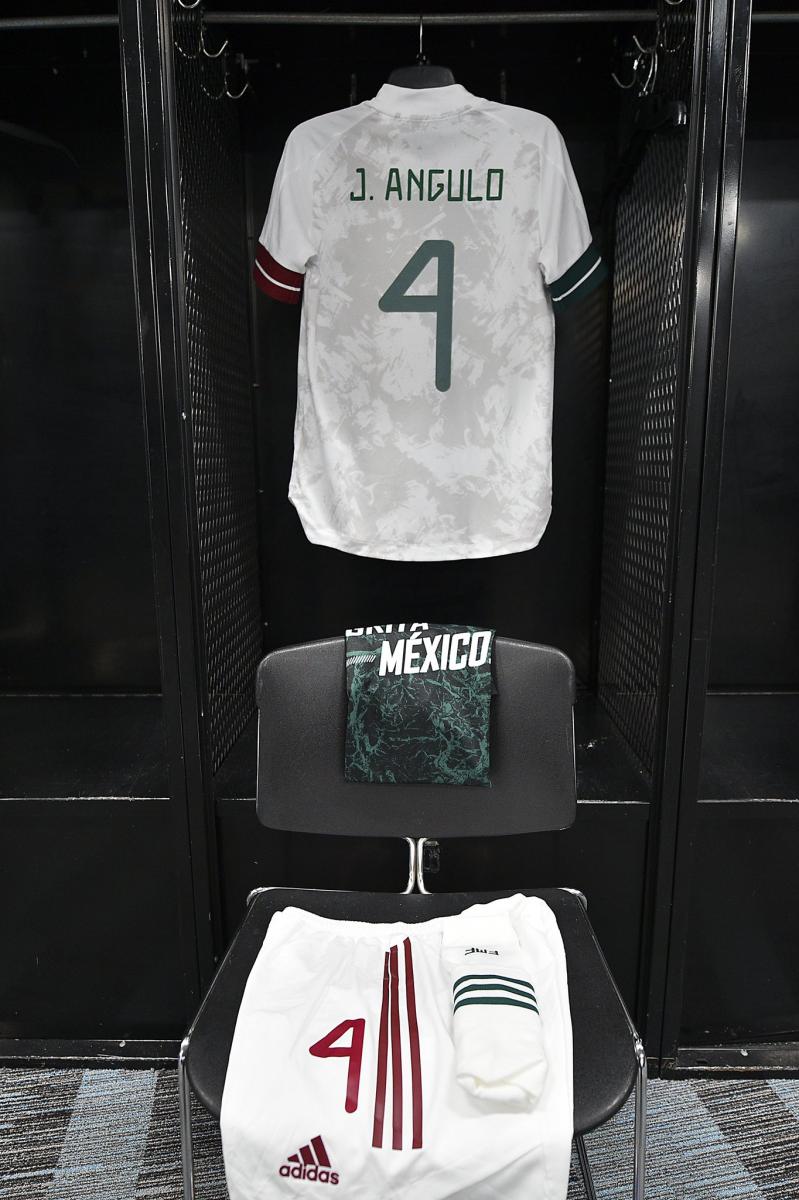 Although everyone had expected Rodolfo Cota to be the starting goalkeeper tonight, Jonathan Orozco was chosen to keep goal.
7:10 PMa month ago

The call-up for this match was not as expected, as Gerardo Martino surprised by calling up young players he would like to develop.
7:05 PMa month ago

Welcome to the coverage of the match between Mexico and Ecuador, stay tuned, here you will have all the most relevant information of the match.
7:00 PMa month ago

Stay tuned for the Mexico vs Ecuador live stream

In a few moments we will share with you the starting lineups for Mexico vs Ecuador live, as well as the latest information from the Bank of America Stadium. Stay tuned to VAVEL's minute-by-minute live online coverage of the match.
6:55 PMa month ago

How to watch Mexico vs Ecuador Live Stream on TV and Online?

If you want to watch the game Mexico vs Ecuador live on TV, your options is: TUDN.

"We know him, we know his qualities and as it is a call-up where we have sought to bring young people, we found a nice possibility to bring him; for him it is a nice opportunity, we have seen him work very well and he has an excellent future."

"We have seen him work very well and he has an excellent future. We are in the middle of a Qualifying Round in which we are in the lead and with complicated matches ahead".

"As I always say, we form a working group in which each one has his hierarchy, we are happy to work with each other and respect is focused precisely on that".

"It is a call where we are looking for young people, in a good opportunity to observe them."

Gustavo Alfaro, spoke prior to this match: "Ultimately, what we are looking for and what we want is for Ecuador to be in the World Cup".

"When the National Team calls you have to try to take advantage of that kind of opportunities".

"Importance has been given to older players like me and I appreciate it, but also to very young players who are in important leagues such as Piero Hincapié, Moisés Caicedo, Gonzalo Plata".

"What has been done so far is completely meritorious, it is very important and gives us a lot of strength to face the remaining dates of elimination".

"While I am not the one who has the least time to work, because there are Professor Rueda and Lasarte, who have taken their selections at a certain time, they already had selections that one could see the proven maximum and minimum performance of the players with the jersey of the national team. The tests that we have to do, is when we play for points. Except for that friendly with Bolivia, we never had the chance of friendly tests".

"I am not a person who gives praise to anyone, the effort takes us to these places and I want the players to know that they are here because of the merits they have done... I walk the streets of Quito and Guayaquil, and there is a lot of illusion for these young players".

Yon de Luisa spoke about the non-call-up of Javier Hernández: "Javier was considered by the coach, that's why he was called and that's why he played", he said in an interview to Telemundo. But. "In that period there were a series of internal things that were decided to keep them that way, which is why the coach has decided not to call him up and in that sense we have discussed it repeatedly: whatever 'Tata' decides has the full support of Gerardo Torrado and they both have my full support. This is a good example of what happens inside is resolved internally. We have to look out for the good of the group".

"All players have the opportunity to play in the National Team, at the end of the day it is the coach's decision. I don't have any vetoed person".

To continue with rhythm

Ecuador arrives to this match after a goalless draw against Colombia; Alfaro's team will try to beat Mexico and continue with its good preparation. 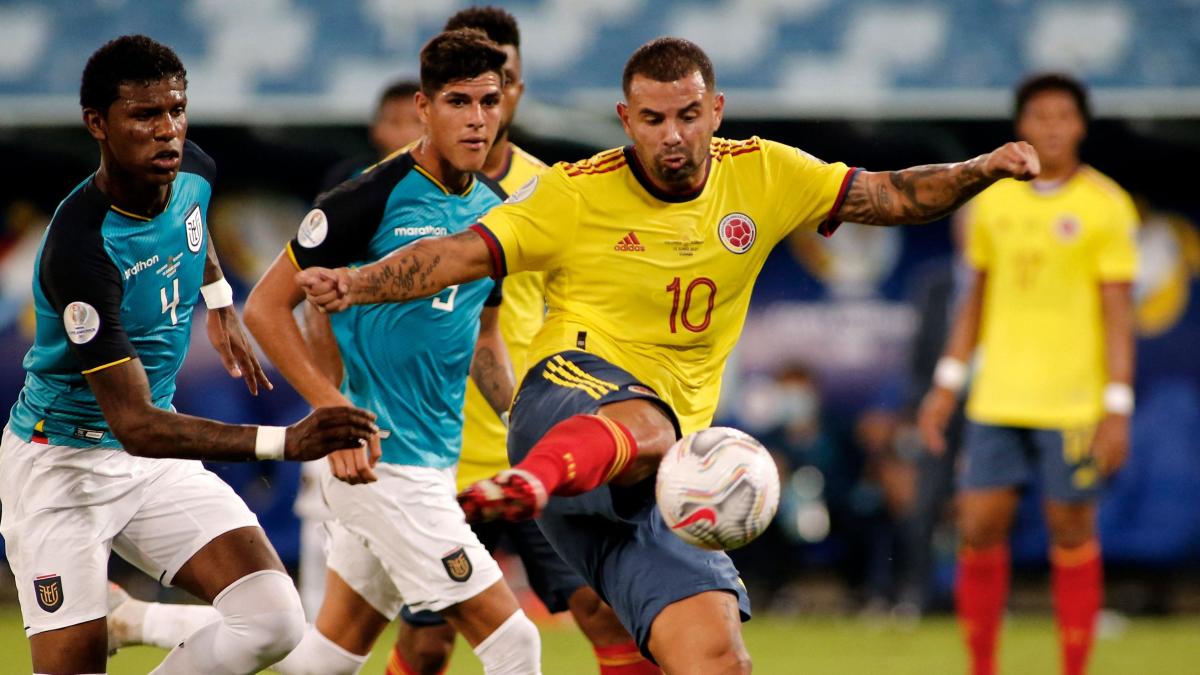 To continue their preparation

Mexico defeated El Salvador by two goals to zero in its last match corresponding to the Octagonal. The team will be looking for a good result. 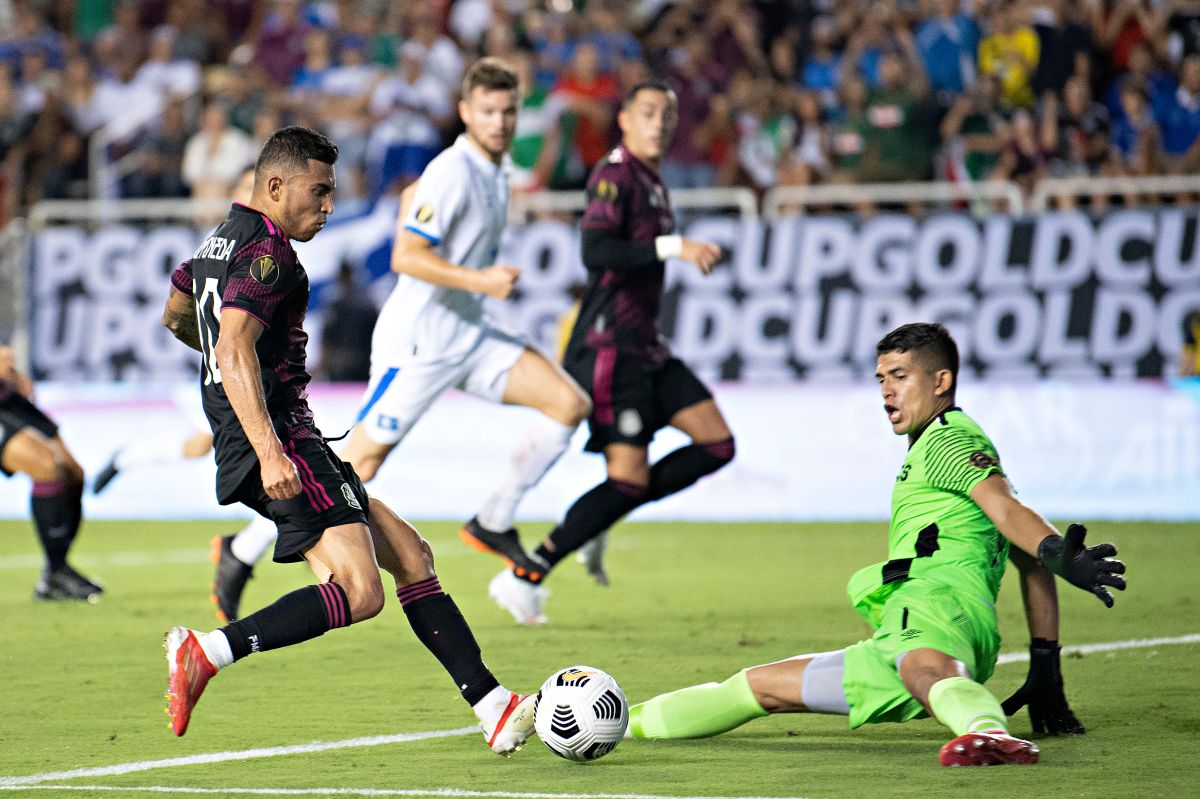 The match will be played at the Bank of America Stadium.

The Mexico vs Ecuador match will be played at the Bank of America Stadium, located in Charlotte, United States. The capacity of the stadium is 75,412 people. 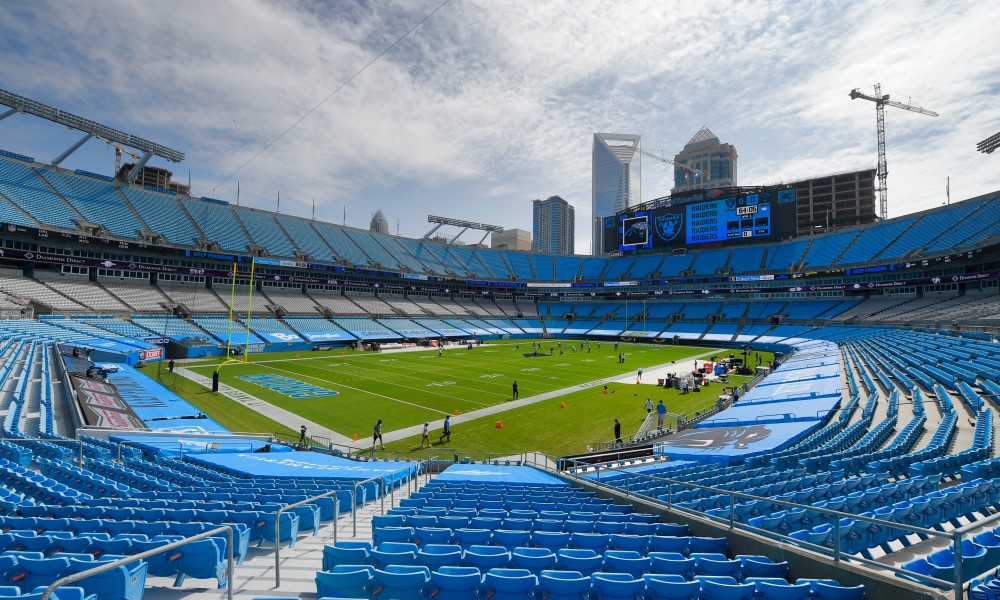