We hope you enjoyed the Granada vs Getafe matchday 11 of La Liga. Continue to visit the VAVEL website to keep up to date with all the information that comes up throughout the day.
3:00 PMa month ago

Match ends at the Estadio Los Cármenes in Granada, Spain. The Blue and Whites managed to come away with a point after a tough match against Granada.

At the beginning, both teams started with low revolutions, trying to keep possession of the ball while studying each other. Later, in the 36th minute, Enes Ünal scored the first goal of the match.

In the second half, the home team went all out in attack, but the ball refused to go in for the rest of the match. It was not until stoppage time that Vidal came on to tie things up and save one of the three points at stake.

LAST 10 MINUTES OF THE MATCH! Granada are going all out in search of an equalizer, while Getafe are defending their goal tooth and nail.
2:38 PMa month ago

THE ONE THAT WAS LOST! It was Granada's equalizer, but Darwin Machis miskicked the penalty and sent the ball into the stands.
2:36 PMa month ago

PENALTY FOR POMEGRANATE! The referee signals the penalty and the home team can tie the score.
2:35 PMa month ago

Getafe is saved! Luis Suárez drove the ball from midfield into the six-yard box and fired a shot that went just past the post.
2:28 PMa month ago

Enes Ünal tried to score the second for Los Azulones, but his shot went wide.
1:49 PMa month ago

END OF THE FIRST HALF. Surprisingly, the blue and blues team is winning at the moment by the minimum against Granada.
1:39 PMa month ago

Enes Unal sends the ball into the back of the net to put the Blue and Whites ahead.

The red-and-whites close in! Milla took a shot from outside the area but his attempt went into the stands.
1:24 PMa month ago

Granada continued to press, the red and white team sent a cross into the small area but the visiting goalkeeper controlled it well.
1:16 PMa month ago

Granada came close! Machis received a perfect cross to the penalty spot, but the shot was too powerful.
1:11 PMa month ago

Grenada is coming! Rochina sent a dangerous cross trying to find L. Suarez but the ball came out too wide.
1:06 PMa month ago

Enes Unal's attempt goes over the crossbar.
1:01 PMa month ago

The match between Granda and Getafe kicks off, both teams are in need of the three points.
12:52 PMa month ago

In a couple of minutes we begin with the duel: Granada vs Getafe, duel corresponding to the 11th round of the Spanish League.
12:47 PMa month ago

This is the atmosphere inside the Estadio Los Cármenes prior to kick-off.

Granada starts the warm-up prior to the start of the match on the Los Cármenes pitch. 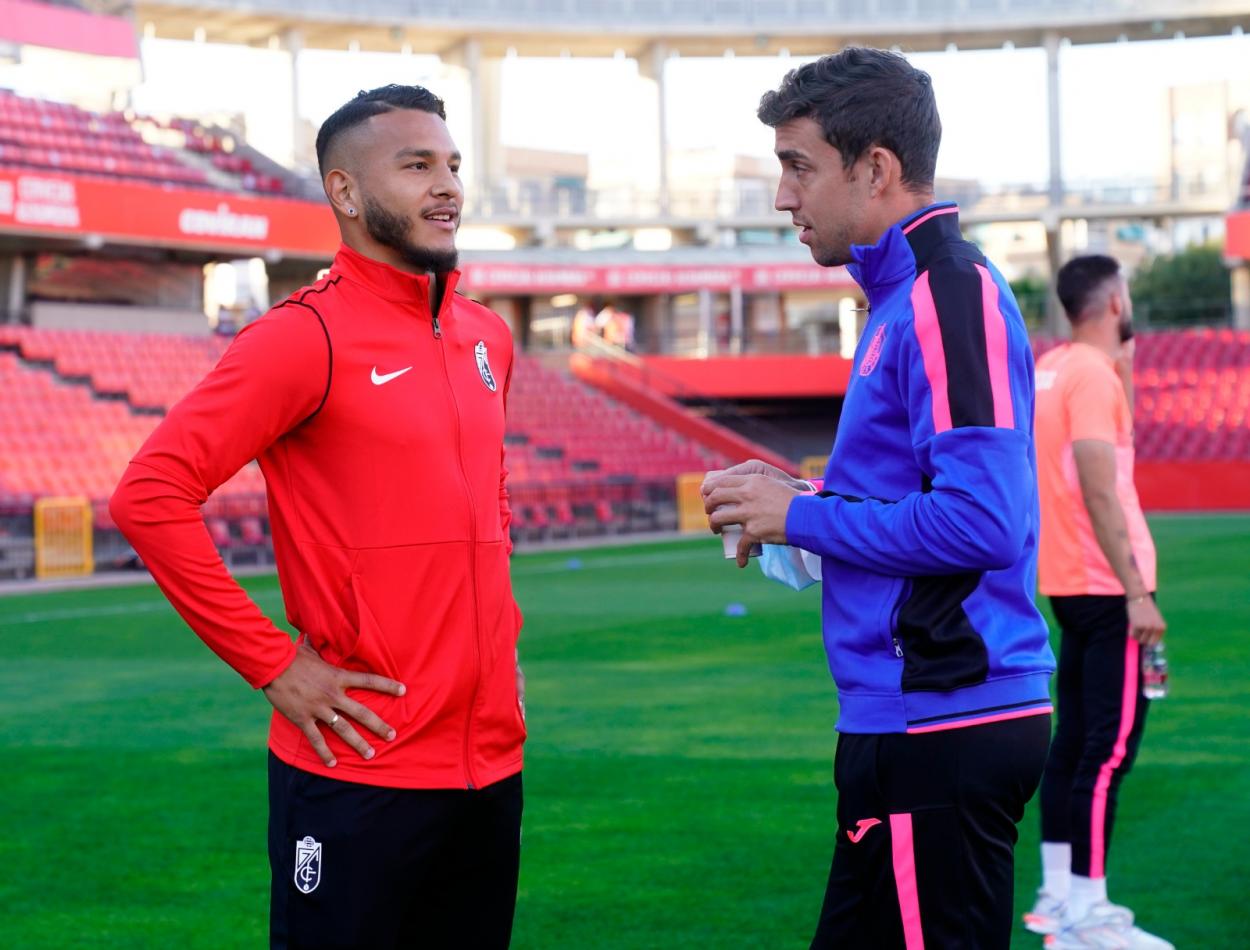 How is Getafe doing?

Getafe is currently the worst team in La Liga Santander, located in the last position of the general table with only 2 units. This is a very worrying situation for the Getas, who have been very disoriented since the departure of the coach who accompanied them for many years.

The "positive" thing is that those two units have been added in their 3 most recent matches, a minimal improvement that is not enough to try to save the category, especially with 6 units difference with respect to salvation. The worst of all is that there are no answers in offense, as they have not been able to score in 11 of the last 15 games they have played.

Another big problem is that they have many injuries: Jaime Mata, Vitolo, Sabit Abdulai and Jakub Jankto are injured. Meanwhile, Chema Rodríguez and Djené Dakonam are suspended.

How is Granada coming along?

Granada is still quite compromised in the lower part of the general table but at least they were able to find improvement in their results, taking 4 points out of the last 6 possible. In fact, they are coming from a draw against Osasuna at home, an opponent that is fighting for European places.

However, this does not detract from the fact that they have only 7 points so far and are still in the red zone, a very low number of points that is starting to condemn them very early on. This is not strange if we consider that they have failed to win 13 of their last 14 matches.

In terms of absentees, Neyder Lozano, Yan Eteki, Maxime Gonalons and Isma Ruiz are out of the squad due to injury.

The Nazaríes, at least, can breathe a little easier after taking four of the last six points and Robert Moreno has saved their first match ball of the season. Meanwhile, the Blue and Whites have already used up the bullet of the change of coach and, for the moment, the arrival of Quique Sanchez Flores has changed practically nothing.
12:22 PMa month ago

These are the eleven blue and blues players who will be out to win and spoil the party for the local fans.

The Granada eleven is ready!

These will be the red and white eleven that the local D.T. sent to get the victory at home.

This is how the home team arrived, accompanied by the chants of their fans who are looking forward to their team leaving today with the victory in their hands.

The wait is over, action resumes in the Spanish league with Granada hosting Getafe from the Estadio Los Cármenes in Granada, Spain. Both teams are at the bottom of the table, with the visitors needing the three points in this match.
11:57 AMa month ago

Do not miss a detail of the match with the live updates and commentaries of VAVEL. Follow along with us all the details, commentaries, analysis and lineups for this Granada vs Getafe match.
11:52 AMa month ago

What time is Granada vs Getafe match for LaLiga?

This is the start time of the game Granada vs Getafe of 30th October in several countries:

Watch out for this Getafe player:

Enes Ünal will be the player to watch during this match for the azulones, the Turkish-born striker could be a determining factor in the 90 minutes as he has played three of the five preseason matches as a starter, also, the born attacker has drilled the net three times. Likewise, Ünal already has experience in Spanish soccer since his arrival in the 2017-2018 season and since then he has played 126 duels, scored 22 times and participated in 10 assists so he could make a difference in this duel.
11:42 AMa month ago

Watch out for this Levante player:

Since his arrival this year, Carlos Bacca has become a reference and idol of the Granada fans. The Colombian has played around 395 minutes with the red and white jersey, he has appeared 7 times as a starter and on 1 occasion he has assisted during his stay at the club, he has also seen the yellow card on 2 different occasions.
11:37 AMa month ago

Granada and Getafe have met a total of 24 times (12 wins for Granada, 5 draws and 7 wins for Getafe) where the balance is tipped by a wide difference in favor of the Nasrid side. Similarly, it is the Granada team who have the advantage in goals scored as the balance is tipped in their favor with 40 goals while the visitors have 27. Their last clash dates from the 38th matchday of the 2020-21 season where both teams drew by a score of 0-0.
11:22 AMa month ago

For this match, Adrián Cordero will be the central referee, accompanied by David Mende and Santiago Jaime as assistants 1 and 2 respectively, and Miguel Ángel Ortíz will be the fourth referee.
11:17 AMa month ago

Sinking to the bottom of the table

For their part, Getafe are at the bottom of the general table, being the last team in the competition with 2 points. However, despite not occupying one of the places at the top or in the middle of the table, they may cause a surprise at home, because despite having lost last matchday, the factor of not wanting to be relegated from the maximum circuit could favor them and make them play their best soccer for this match and be able to take three golden points home.
11:12 AMa month ago

Los Nazaríes have been characterized for being a mid-table team in the Spanish football competition, they have a modest squad but enough to stay in the maximum circuit of the country. Currently, the team coached by Diego Martinez Penas is in the sixteenth place with 7 points, however, it is of vital importance to start getting three points from three because the difference is not much with the teams that are sunk at the bottom and a defeat in this match day could put them to think about not being relegated.
11:07 AMa month ago

They already have to start winning

The eleventh date of LaLiga will bring us a clash of similar realities when Granada receives Getafe at the Estadio Los Cármenes, on the one hand, the locals are in sixteenth place in the general table with 7 points that have been the result of 1 win, 4 draws and 4 defeats so far this season. On the other hand, Getafe are in 20th position with only 2 points so far this season and, unlike their opponents, they have 2 draws and 8 defeats, so they are desperate for a win this matchday.
11:02 AMa month ago

The Granada vs Getafe match will be played at Los Cármenes Stadium, in Spain, Granada. The kick-off is scheduled at 16:00 pm ET.
10:57 AMa month ago

Welcome to VAVEL.com’s LIVE coverage of the 2021 LaLiga: Granada vs Getafe!