It's over! Atlas is unable to defeat Xolos and falls at home.
8:55 PMa month ago

Manotas' shot, but Vargas appears in the background.
8:51 PMa month ago

Atlas is looking to score, but the goaltending hasn't helped tonight.
8:46 PMa month ago

Quiñones fails to control inside the area and misses out on the discount.
8:43 PMa month ago

Rodriguez came close to increasing the lead, but his ball went straight over the crossbar.
8:41 PMa month ago

Goal, goal, goal for Xolos! Castillo shot into the goal and ends up extending the lead
8:41 PMa month ago

Atlas looks for the equalizer, but can't find it.
8:34 PMa month ago

Herrera's shot, but the goalkeeper ends up holding the ball.
8:16 PMa month ago

Reyes sends a shot, but Rak ends up deflecting the ball.
8:13 PMa month ago

The second half of the match between Atlas and Xolos begins.
7:52 PMa month ago

At the end of the first half, Atlas is down by the minimum.
7:52 PMa month ago

Jairo Torres fails to make contact with the ball and Ruíz makes a great save.
7:45 PMa month ago

Change due to injury for Xolos. Enter Víctor Guzmán for Vladimir Loroña.
7:37 PMa month ago

Goal, goal, goal for Xolos! Mauro Manotas sent a left-footed shot after a cross from Lucas Rodríguez to put the visitors ahead.
7:28 PMa month ago

It was a warning! The referee decides to give Angulo a yellow card.
7:27 PMa month ago

VAR! The referee will review a strong tackle by Angulo on Jairo Torres.
7:25 PMa month ago

Jeremy Márquez made an excellent intervention to prevent Xolos' goal.
7:17 PMa month ago

Reyes' cross and they fail to hit the ball correctly into the goal.
7:14 PMa month ago

A long distance shot by Manotas is deflected by Vargas.
7:11 PMa month ago

Barbona's long distance shot, but it does not generate danger.
7:02 PMa month ago

The match kicks off in Guadalajara.
6:59 PMa month ago

Xolos, with Sebastián Méndez at the helm, is already in Guadalajara and will be looking for its second victory of the tournament.
6:44 PMa month ago

La Furia Rojinegra is present at the Jalisco Stadium ready to play its penultimate home game before the Liguilla.
6:41 PMa month ago 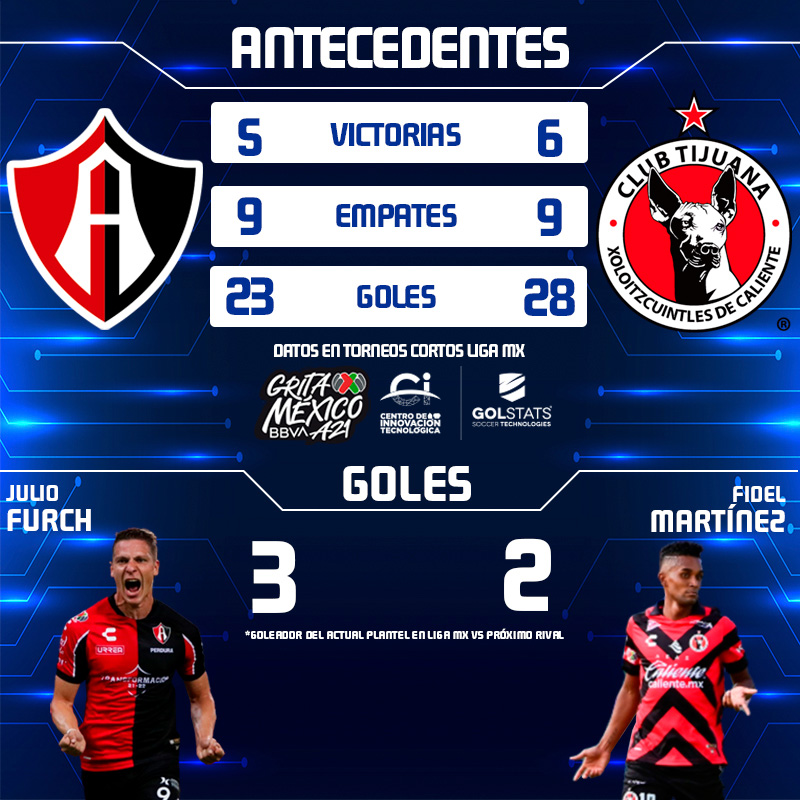 Julio Furch and Julián Quiñones have scored the most goals in this Apertura 2021 for Los Rojinegros; each has five goals, a figure they will want to increase.
6:26 PMa month ago

Rowing against the current

Xolos is the team that has conceded the most goals in this Apertura 2021, with 25 goals conceded and only 11 goals scored.
6:21 PMa month ago

Julio Furch for Atlas and Mauro Manotas for Xolos; both forwards accumulate 5 and 2 goals respectively; the players will be looking to increase their numbers and create danger in the opponent's goal.
6:16 PMa month ago

Atlas comes into this match with 19 goals scored and only eight conceded, a tally they will be looking to increase tonight.
6:11 PMa month ago

Welcome to the coverage of the match between Atlas and Xolos, this match corresponds to Matchday 16 of the Apertura 2021.
6:06 PMa month ago

In a few moments we will share with you the starting lineups for Atlas vs Xolos live, as well as the latest information from the Estadio Jalisco. Don't miss any details of the match with VAVEL's minute-by-minute live online coverage.
6:01 PMa month ago

How to watch Atlas vs Xolos Tijuana Live Stream on TV and Online?

If you want to watch the game Atlas vs Xolos Tijuana live on TV, your options is: TUDN.

Diego Cocca spoke prior to the match against Xolos: "These are opinions, I don't share them, on the contrary, I'm just saying that this tournament is very even. No one has an advantage over anyone. América got a few more points because the team improved. Mexican soccer is very competitive today."

"We are in an era in which we want everything fast. We are talking about the team taking six, seven dates, it is logical, although many teams take a little longer. The team is used to not being in the Liguilla, there is a big effort from the coaching staff and board of directors to change this image of Atlas".

"When there is a date in which there are few goals, we say that Mexican soccer is bad, but if Atlas scores, we say that it is very good. The soccer spectator likes it, but I don't like it. I believe that the most important thing is the players, the spectator has opinions, or at least that's how I feel about soccer."

"Well-understood confidence is good, maintaining dialogue to avoid relaxations, we play every game as a final, it is our line, we want to close the tournament well and what better at home".

"There is still a long way to go to have the level I want, the team is going step by step, I am not uncomfortable if I am told that I am defensive, the path is clear, that is why we are where we are, I repeat every game is a final for us and it will not be the exception in the closing of the tournament, we want to close strong and in a good way".

Urgent need to win at the border

Xolos continues to be at the bottom of the general table, the Tijuana team has accumulated only one victory and in their last match they lost three goals to one against Pumas; the team coached by Sebastián Méndez needs a victory to lift their spirits. 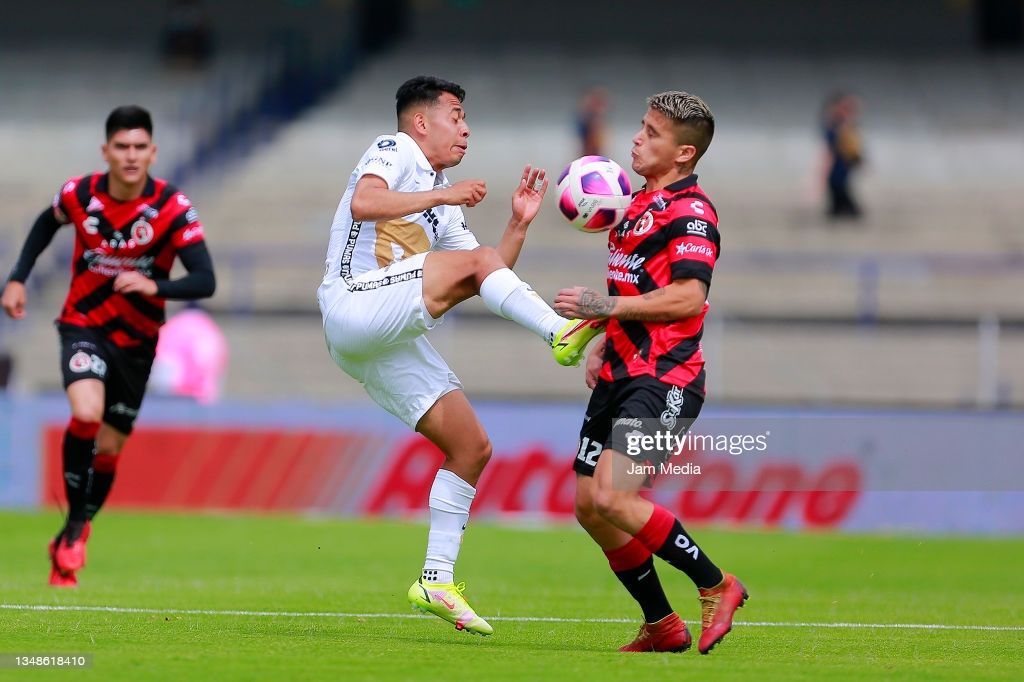 Atlas arrives after beating Atlético de San Luis six goals to two; Hugo Nervo scored twice in this match. In addition, after this result, the Guadalajara team secured their place in the final phase of the match. 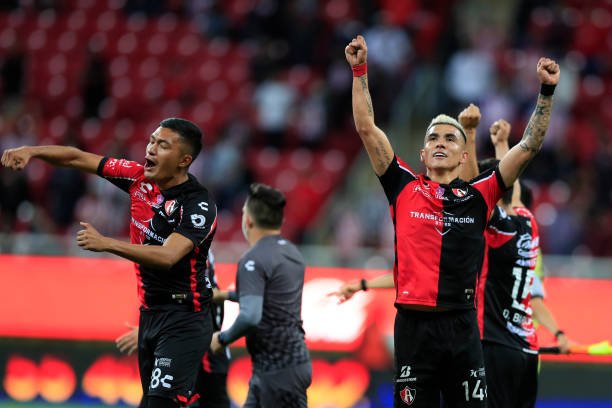 The Atlas vs Xolos match will be played at the Jalisco Stadium, located in Guadalajara, Jalisco. The stadium has a capacity of 55,020 people. 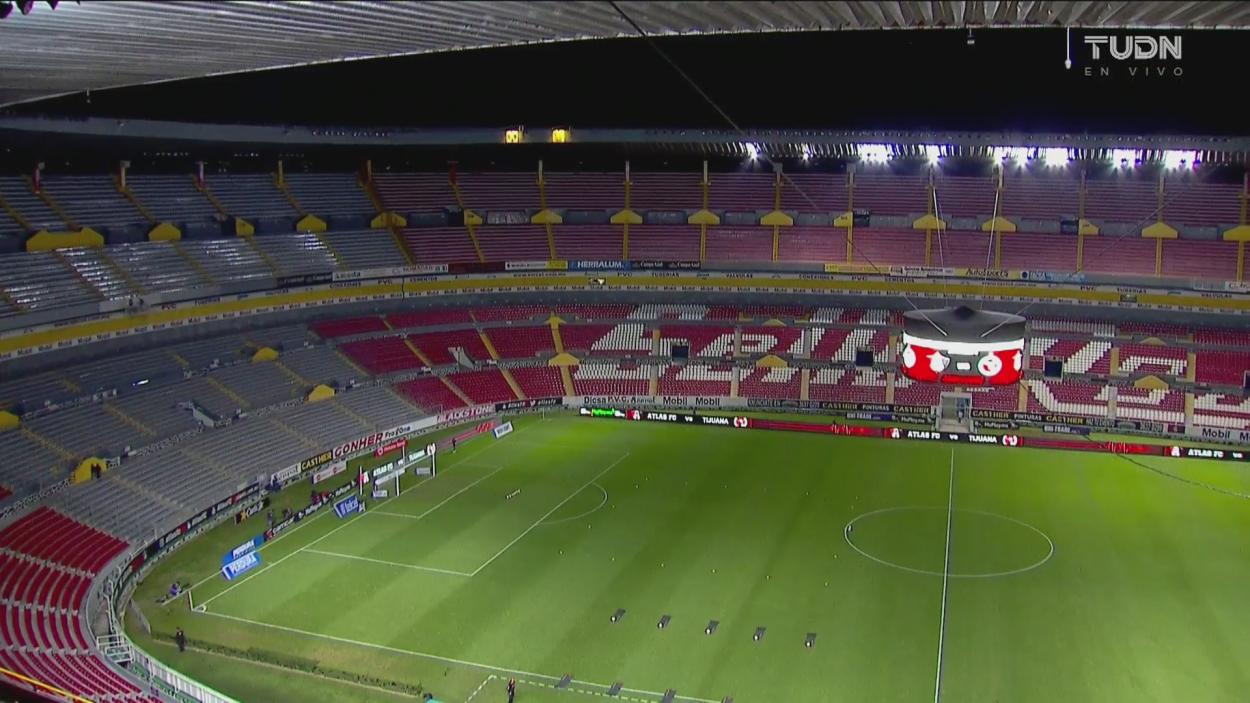