Thank you once again for your readership here on VAVEL. Have a good afternoon and see you next game!
9:57 AM3 months ago

Atalanta return to the field on Tuesday (2), when they receive Manchester United in the Champions League. Lazio play on Thursday (4), in the Europa League, when they visit Olympique Marseille.
Standings provided by SofaScore LiveScore
9:54 AM3 months ago

In a hotly contested match, Atalanta twice fell behind on the scoreboard, but twice came back to draw level!
9:53 AM3 months ago

A cross from the right was deflected, and De Roon's first-time shot was delivered to the left corner of Reina, who could do nothing! It's tied again!
9:51 AM3 months ago

Yellow card to Pepe Reina and to Lucas Leiva for complaining.
9:49 AM3 months ago

Koopmeiners found the pass, the ball went past Zapata, to Piccoli, who hit it hard, but into the net from the outside!
9:44 AM3 months ago

Replacement for Lazio: Immobile left, Muriqi came in.
9:42 AM3 months ago

Substitution at Atalanta: Zappacosta out, Piccoli in.
9:41 AM3 months ago

Immobile received in the area and tried the low shot, but Musso got it in two times!
9:38 AM3 months ago

Maehle hit it hard from outside the box and sent it over the goal. Atalanta are looking for an equalizer!
9:36 AM3 months ago

Yellow card to Demiral, for a foul on Immobile near midfield.
9:34 AM3 months ago

On the counter-attack, Pedro took off down the middle and put it on the left to Basic, who played to the middle, where Immobile dominated and hit the back of the net!
9:26 AM3 months ago

Double substitution at Atalanta: Ilicic and Lovato left to enter Muriel and Scalvini. And at Lazio Luis Alberto, Cataldi and Felipe Anderson were out for Basic, Lucas Leiva and Moro.
9:18 AM3 months ago

Atalanta substitution: Pasalic out, Malinovskyi in.
9:14 AM3 months ago

Pasalic's deflected shot was placed on the right side of Pepe Reina's goal!
9:14 AM3 months ago

Immobile received in front, invaded the area and hit hard, but Musso saved the ball, saving Atalanta!
9:09 AM3 months ago

On Koopmeiners' outside shot, Pepe Reina dropped into the left corner and got it!
9:03 AM3 months ago

Zapata gets his first touch on the ball and it rolls into the second half of Atalanta and Lazio!
9:02 AM3 months ago

The teams appear on the field to start the second half.

And with a goal in the dying minutes, Atalanta equalized and goes to the break taking a point against Lazio!
8:48 AM3 months ago

Zapata received the ball on the right, didn't lose his body, and hit it hard, cross, tying the match at the end of the first half!
8:47 AM3 months ago

Immobile hit hard from the right and sent it over the goal!
8:36 AM3 months ago

Atalanta tries to keep possession, press and create chances, but can't get any shots, just like Lazio, who look for counter-attacks.
8:20 AM3 months ago

On the error of the Atalanta defense Immobile got it inside the area and shot for goal, but Musso deflected. The problem was in the rebound, when Pedro arrived to finish and open the score!
8:12 AM3 months ago

On a cross in the box Demiral managed to get a header, but it went over the goal.
8:02 AM3 months ago

Immobile takes the first touch on the ball and it's off to the first half for Atalanta and Lazio!
7:58 AM3 months ago

The players leave the pitch to continue their warm-up for the match later on in the locker room, and then take the field for the ball to roll!

Continuing on Sunday's games, Genoa hosts Venezia, Sassuolo faces Empoli, and Salernitana takes on Napoli. Closing the Sunday, Roma play against Milan. And on Monday (01), Bologna hosts Cagliari, closing the round.
7:35 AM3 months ago

This match you are watching now opens the 11th round, and is followed by Verona and Juventus. Later today Torino and Sampdoria will play. Early tomorrow Inter will face Udinese and Fiorentina will face Spezia.
7:31 AM3 months ago

Lazio coming for the warm-up!

The shirts for today! 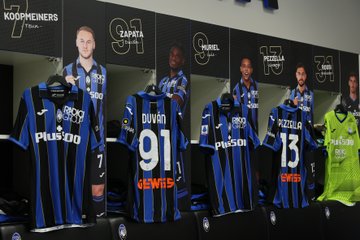 The players appear on the field to begin their warm-up work.
7:15 AM3 months ago

Lazio is lineup and comes to the field with:

Atalanta is lineup and comes to the field with:

The broadcast of the Serie A match between Atalanta and Lazio now begins!

Do not miss a detail of the match with the live updates and commentaries of VAVEL. Follow along with us all the details, commentaries, analysis and lineups for this Atalanta vs Lazio match.
6:55 AM3 months ago

How to watch Atalanta vs Lazio Live in TV and Stream

If you want to watch the game Atalanta vs Lazio live on TV, your options is: none.

What time is Atalanta vs Lazio match for Serie A?

This is the start time of the game Atalanta vs Lazio of 30th of October in several countries:

Marco Guida will referee the match, with assistants Fabiano Preti and Rodolfo Di Vuolo. Gianluca Aureliano will be in charge of VAR.
6:40 AM3 months ago 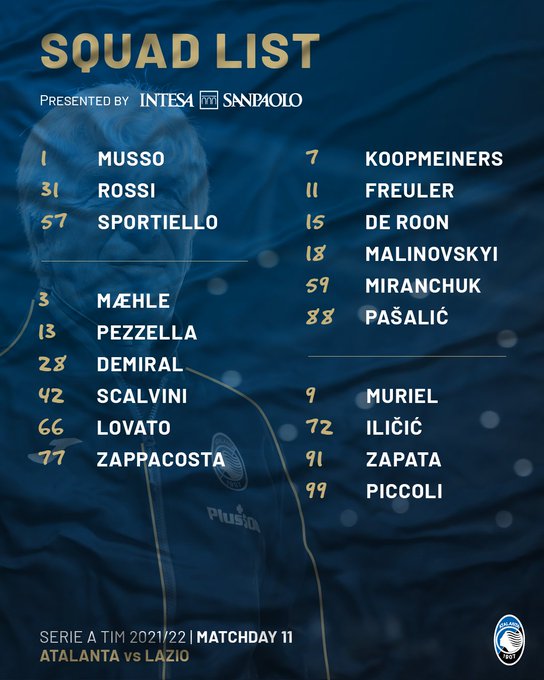 Atalanta will still be unable to use Djimsiti, Gosens, Hatevoer and Pessina, all injured, and Palomino, suspended, while Lazio will have only one player out: Zaccagni.
6:25 AM3 months ago

Today's game is a six-point game. Atalanta are in 5th position with 18 points, one behind Roma and two behind Inter. Lazio, meanwhile, are literally right behind, with 17 points in 6th position, two ahead of Juventus and Fiorentina, and three ahead of Sassuolo.
Standings provided by SofaScore LiveScore
6:20 AM3 months ago

Lazio, meanwhile, are coming from a win and a loss - by a score - in their last two games, both also in Serie A. Against Fiorentina, last Wednesday, they won 1-0 at home, with a goal by Pedro. And before that, on Sunday, the defeat was to Verona by 4-1. Immobile scored for Lazio, but Simeone was relentless and unstoppable, scoring all four goals for Verona.
6:15 AM3 months ago

Atalanta are coming from two Serie A matches, where they drew one and won the other. The draw was with Udinese, at home, on Sunday (24). Malinovskyi opened the scoring and Beto equalized in the 49th minute. And last Wednesday (27), against Sampdoria, the victory was a come-from-behind 3-1 away from home. On the day Caputo opened the scoring, Askildsen equalized with an own goal, Zapata turned it all around, all in the first half, and in the second, only in the 50th minute, Ilicic scored his and closed the account.
6:10 AM3 months ago

Welcome to VAVEL.com’s coverage of the 2020 Serie A match: Atalanta vs Lazio Live Score!