Four #UCL group stage wins out of four for the first time ever.

The Atlético de Madrid player's shot in stoppage time went over the goal;
4:43 PM3 months ago

Good play by the Egyptian who got away from several defenders, but in the pass to the area, he did not find Diego Jota.
4:35 PM3 months ago

75' Changes in both teams

Klopp has to take off Roberto Firmino who comes on in the second half, but leaves with discomfort, Minamino comes on. Simeone removes Correa and enters Javier Serrrano.
4:34 PM3 months ago

The Mexican player shot, but the shot went wide.
4:32 PM3 months ago

70' Another double change for Atlético

Cunha and Vraslijko enter and Koke and Carrasco leave;
4:23 PM3 months ago

The Dutch center back found no defenders and tried his shot, but it sailed over the goalkeeper's head.

The Spanish player returns to the field after his injury and comes in for Fabinho.
4:19 PM3 months ago

Luis Suarez and Joao Felix leave the field and in their place Herrera and Renan Lodi enter the field.
4:18 PM3 months ago

Uruguayan striker scored to pull one back, but the goal was disallowed for offside.
4:13 PM3 months ago

Diego Jota scored the third, but the goal was disallowed for offside.
4:06 PM3 months ago

It will be difficult for the Spanish team as it has one less player and is two goals behind.
4:04 PM3 months ago

Mane, who has a yellow card, leaves the field and Roberto Firmino comes in his place;
3:49 PM3 months ago

End of the first game

The Liverpool player tried a shot from outside the area, but the shot went narrowly wide of the goal defended by Oblak;
3:40 PM3 months ago

37' Atletico is down to one man

Red card for Felipe, first for cutting off Mane's counterattack and then for ignoring the referee's warning to approach;
3:34 PM3 months ago

31' Atlético's attackers did not understand each other

Joao Felix passed inside to Luis Suarez, but they didn't understand each other and the ball went to the English.
3:29 PM3 months ago

Liverpool's second, Mane plays through to Henderson who passes to Alexander Arnold who shoots, but the ball falls back to Mane who scores the second.
3:21 PM3 months ago

The Liverpool player received a yellow card after protesting and asking the referee for a yellow card for Correa;
3:16 PM3 months ago

Liverpool took the lead with Alexander Arnold's cross into the area and there the Atlético defense did not do well and Jota just sent the ball into the net;
3:10 PM3 months ago

Atlético Madrid player runs over Mohamed Salah and gets the first card of the match.
3:08 PM3 months ago

A pass into space to Suarez, who didn't give up and almost caused a penalty, as Matip was mistrustful.
3:05 PM3 months ago

Liverpool and Atlé tico de Madrid kick off at Anfield

The Champions League anthem is played at Anfield, with a spectacular atmosphere;
2:55 PM3 months ago

Group B is very evenly matched, if Liverpool wins against the Red & Whites will be already qualified for the round of 16,  seek to score to have more options to move to the next round.
2:47 PM3 months ago

In the other group match, the points were shared as the Portuguese took the lead with a goal by Luis Díaz, but half an hour from the end the Italians equalized with an own goal;
2:29 PM3 months ago 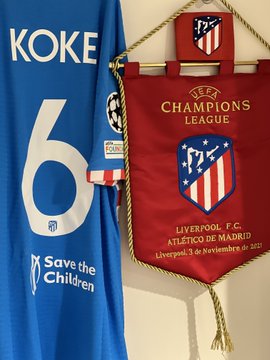 Joao Felix and Suarez in attack

Klopp out without Robertson, Firmino

In just one hour's time, Liverpool and Atletico Madrid kick off at Anfield.

Where and how to watch Liverpool vs Atlético de Madrid ?

What time is Liverpool vs Atlético de Madrid ?

This is the kickoff time for the Liverpool vs Atlético de Madrid  match on November 3 in several countries:

I explained it after the game, I do not like to greet after the games because I always understand that the emotions of the coaches are different, in England it is used as chivalry but I do not share it because I do not like falsehood. I can't talk about the person because I don't know him, I value the great coach he is and the great job he has done. I have no opinion on how the opposing teams play, I have my own opinions and among coaches we have to respect that situation.The three games ahead for the four teams are decisive for all of them, football is very changeable and the one that is first today can be third and the one that is third can finish first. Each team must compete in the best way, the three have the same importance.

How does Atlético de Madrid arrive?

The rojiblancos beat Betis after failing to win in the previous three matches with two draws in LaLiga and a defeat in the Champions League. Simeones' side are fourth in LaLiga Santander with 22 points, three points behind leaders Real Sociedad. While in the Champions League they are second with four points out of a possible nine and the same points have Porto, which is third;
5:34 PM3 months ago

How is Liverpool coming along?

Klopp's side are still unbeaten so far this season. In the last six games they have won in five. Although in this weekend's game they could only draw against Brighton despite taking a 2-0 lead.>They are second in the Premier League and top of the Champions League group with nine points from a possible nine. In addition, they are qualified for the quarterfinals of the Carabao Cup where they will face Leicester City;
5:29 PM3 months ago

Liverpool and Atlético de Madrid have met eight times, with two wins for the English, three for the Spanish and three draws. In the first leg two weeks ago, Liverpool won 2-3. However, in 2020 the Madrid side eliminated Liverpool in the round of 16 after a thrilling match.
5:24 PM3 months ago

Liverpool and Atlé tico de Madrid will face each other in the fourth matchday of the Champions League group stage. Both teams are drawn in group G.

Welcome to VAVEL.COM's LIVE coverage of the match between Liverpool and Atlético de Madrid in the Champions League.