We hope you enjoyed our coverage of Georgia vs Sweden in the UEFA qualifiers for the Qatar 2022 World Cup. Stay tuned to VAVEL.COM for updates throughout the day.
1:57 PM2 months ago

Surprisingly and against all odds, Georgia beat Sweden 2-0 and complicated things for the Scandinavian team that will play against Spain.

The match started with the Swedes suffocating the rival team with pressure, many crosses and dangerous plays that did not end up in the goal.

In the second half, Georgia came out motivated and scored both goals to beat the Swedish team.

LAST TEN MINUTES! The match is coming to an end, the home side are still ahead by the minimum, while Sweden are going all out for an equalizer.
1:37 PM2 months ago

Khvicha Kvaratskhelia scores her brace to seal the game for the home side.

The minutes are running out, Sweden is going all out on the attack in search of an equalizer, Georgia is defending the score tooth and nail.
1:21 PM2 months ago

Khvicha Kvaratskhelia sends the ball into the back of the net.

Irakli Azarovi is cautioned after fouling Ibrahimovich.
1:11 PM2 months ago

Tornike Okriashvili is cautioned after committing a hard foul on Emil Fosberg.
1:08 PM2 months ago

Guram Kashia's header goes just wide of the post. Little by little, the home team is starting to wake up.
1:03 PM2 months ago

The ball is back in play, Georgia and Sweden split points at this point.
12:47 PM2 months ago

Loria is back in the spotlight! Claesson headed inside the box and the Georgia goalkeeper was once again a factor in the match.
12:34 PM2 months ago

First arrival of the home team! Saba Lobzhanidze hits from outside the area and the shot ends up well over the crossbar.
12:16 PM2 months ago

NEAR SWEDEN. Zlatan received a rebound and took a first-time shot, but the goalkeeper was able to stop the shot.
12:12 PM2 months ago

Zlatan tried to set up Isak, but the striker of the moment was offside and the play ended up not being counted.
12:09 PM2 months ago

Alexander Isak has a powerful shot from the halfway line, but his attempt is blocked.
12:02 PM2 months ago

The ball is rolling from Georgia, Sweden will be looking to win the match to secure their ticket to Qatar 2022.
11:50 AM2 months ago

In a few moments we begin

In a couple of minutes we will start with the match: Georgia vs Sweden, matchday 9 of the UEFA qualifiers for Qatar 2022.
11:45 AM2 months ago

The situation between Spain and Sweden

The Spanish National Team is playing for its chances to be in the World Cup Qatar 2022 against Greece but also plays 3 hours earlier in Georgia, where Sweden, current group leader, is looking for a win to further tighten the group and allow them to play for the qualification in their visit to La Cartuja in Seville next Sunday.
The Swedes currently lead the group but if they fail to take all three points they could lose that position if Spain wins in Greece. If they win in Georgia, who are already eliminated, they would go into the match against La Roja knowing that a draw would be enough to see them through to the big tournament.
11:41 AM2 months ago

What can we expect for this match?

A very important match for the Swedes who are favorites to come out victorious in this duel. The Georgian hosts were defeated in the reverse match against the Swedes by (1-0) in Stockholm, and there seems to be no improvement in this section that can foresee a change in that result.

The Swedes must win to put pressure on the Spaniards, who play Greece at the second hour, the Scandinavians have a very competitive team in all lines and a good offense composed of Alexander Isak and Emil Forsberg.

How do Sweden arrive?

The Scandinavians are leaders of group B with 15 points, the team led by coach Janne Andersson, have maintained a fierce fight against the Spanish team for the direct quota to the Qatar 2022 World Cup, distancing themselves from the Iberians by 2 units, it is a race where whoever fails first can lose the so desired quota. The Swedish team has a streak of 1 win, 1 draw and 3 defeats in the last 5 away matches.
The away team's absentees for this match are Ken Sema due to injury and Albin Ekdal due to suspension.
11:38 AM2 months ago

How is Georgia coming along?

The Georgian team has not shown a better face in this qualifying round, as they have only 1 win and 1 draw in the 7 matches played, tied with Kosovo in the last place of the group.
The locals have a streak of 1 draw and 4 defeats in the last 5 matches played at home. The Georgian team is missing Lasha Dvali and Guram Giorbelidze due to suspension.
11:33 AM2 months ago

The first match was held in November 21, 2020, between Dinamo Batumi and Dila Gori. 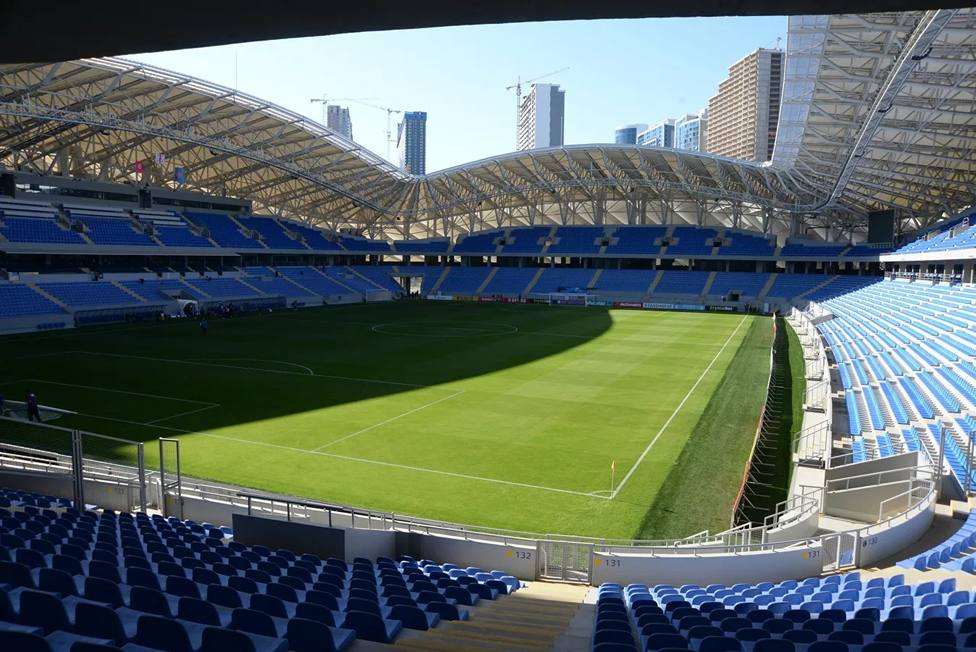 Aiming to stay out of last place

Georgia, on the other hand, are in fourth and penultimate place with just four points from seven matches. Willy Sagnol's side won their most recent match (1-2 against Kosovo), but had previously suffered five consecutive defeats, including four clean sheets.
On the other hand, the two teams met on the first day of qualifying in March, and the Blagult won at home without conceding a goal (1-0).
11:13 AM2 months ago

This is how the Swedish team will start today, looking for a victory and to secure their qualification to Qatar 2022. 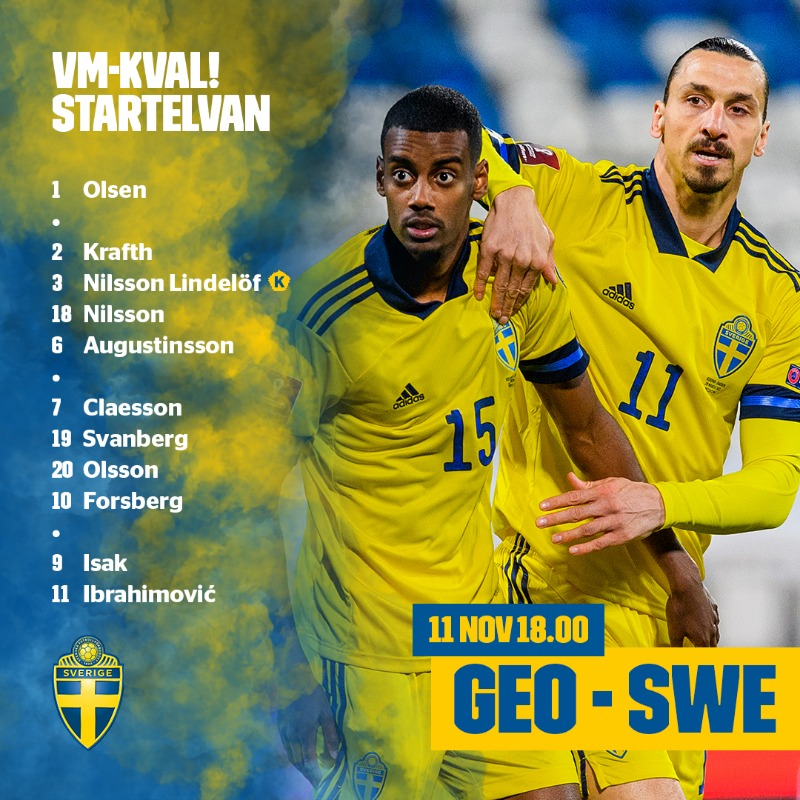 Scandinavians want to hold on to the lead

The Swedish national soccer team is in first place in Group B of the World Cup qualifiers for Qatar after winning five of their six matches, one of them against favored Spain. In addition, Janne Andersson's team has managed to keep a clean sheet in its last two matches.
11:03 AM2 months ago

The wait is over, today the UEFA qualifiers for the Qatar 2022 World Cup will resume today between Georgia and Sweden. On the one hand, the locals are second last in their group and it is a fact that they will not be present at the next World Cup, also, Sweden is nothing to secure a place in the next World Cup if they get the three points and Spain loses against Greece. Very important day for the Swedes!
10:58 AM2 months ago

Do not miss a detail of the match with the live updates and commentaries of VAVEL. Follow along with us all the details, commentaries, analysis and lineups for this Georgia vs Sweden match.
10:53 AM2 months ago

What time is Goergia vs Sweden match for Qualifying round for Qatar 2022?

This is the start time of the game Gerogia vs Sweden of 11th November in several countries:

Watch out for this player from Georgia: 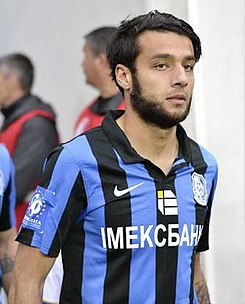 Watch out for this player from Sweden:

He is the current scorer of Sweden's national team, Alexander Isak, will be the player to watch for this qualifier. So far he has 1,679 minutes with the yellow jersey, he has played 30 matches, has scored 9 goals and assisted 3 times, he has also received 2 yellow cards, however, he has never seen a red card with his national team's jersey. 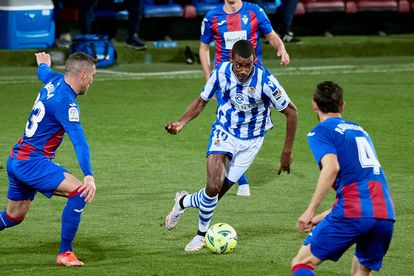 Georgia and Sweden have only met once in the history of European soccer, their most recent duel was on matchday 4 of the qualifiers for the Qatar 2022 World Cup, in which the Swedes came out on top, winning at home by the narrowest of margins. On that occasion, it was Victor Claesson who scored the winning goal.
10:23 AM2 months ago

For this match, Craig Pawson will be the central referee, he will be accompanied by Ian Hussin and Scott Ledger as the assistants 1 and 2 respectively, finally, Michael Salisbury will serve as the fourth referee. In the VAR, referees Michael Oliver and Dan Cook will be in charge of monitoring any dubious play inside the box or that merits a red card.
10:18 AM2 months ago

Going for the World Cup

For their part, the Swedish national team is in the first position of the UEFA qualifiers for the Qatar 2022 World Cup, so far they have 15 points that have been the product of 5 wins, 0 draws and 1 loss, they have scored 12 goals and conceded 3, differences that leave them with +9 and position themselves as one of the most solid defenses so far in the competition. However, this team is also one of the top scorers, being the second best offensive team, only behind Spain. This will be one of the most important duels since in case of winning, they would ensure their presence in Qatar 2022. 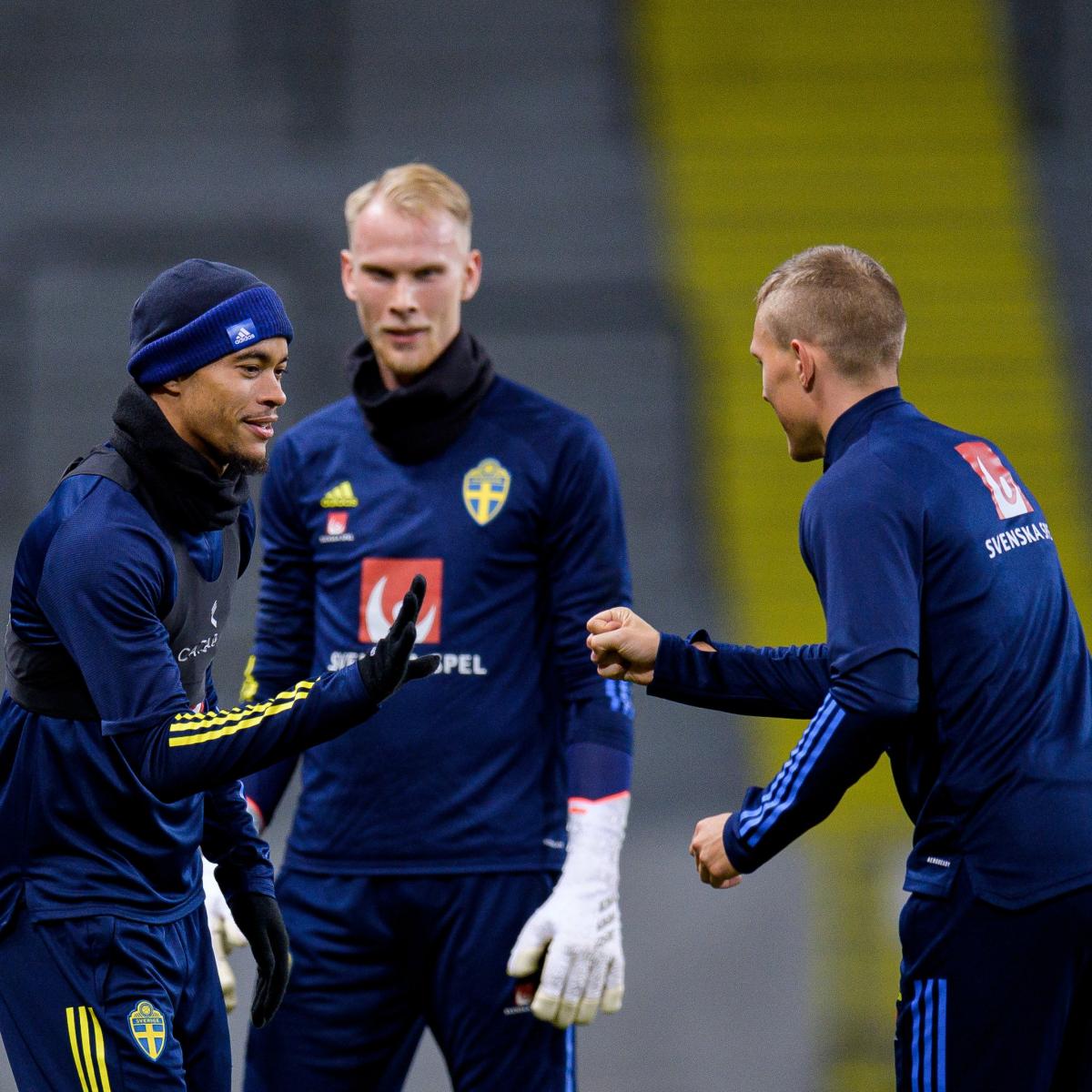 Not to finish last

The Georgian team is second to last in the UEFA Group B qualification table for Qatar 2022, so far they have only managed to get 4 points from 1 win, 1 draw and 5 defeats so far in the competition. They have also registered 4 goals for and 12 goals against, leaving them with a goal difference of -8, being the second highest scoring team in the group. To top it all off, all is already lost for the Peruvian national team, so they will be looking to win this match at any cost.
10:08 AM2 months ago

The road to the World Cup continues

The road to Qatar 2022 resumes in the UEFA, after the last FIFA date in October, the teams will again have to gather their best players to continue with the journey of the final octagonal and seek a ticket to the greatest soccer fair: The World Cup in Qatar 2022. Both teams are in need of points to continue thinking about the World Cup dream, so winning, drawing or losing could mean a huge difference between being out of the goal or not.
10:03 AM2 months ago

The Gerogia vs Sweden match will be played at the Adjarabet Arena, in Batumi, Georgia. The kick-off is scheduled at 13:00 pm ET.
9:58 AM2 months ago

Welcome to VAVEL.com’s LIVE coverage of the Qualifying round for Qatar 2022: Georgia vs Sweden!