Thank you for following this match on VAVEL USA. Until the next time!
10:10 PM2 months ago

In the next round of the qualifying round, Costa Rica will face Panama and Honduras will do the same against Canada.
10:03 PM2 months ago

The referee adds five more minutes to the match.
9:56 PM2 months ago

CLOSE! On a counter-attack, Elis set it up for Quioto who tried to place the ball, but it ended up going wide.
9:50 PM2 months ago

Elis tried to drill into the box on the right, but Duarte forced him to make a mistake and Keylor Navas kept the ball.
9:49 PM2 months ago

Elis won a one-on-one on the right, entered the area and set up Romell Quioto, but a defender ended up deflecting it for a corner kick.
9:45 PM2 months ago

KEYLOR! The Costa Rican goalkeeper comes out to save a Honduras shot to prevent the second goal.
9:27 PM2 months ago

Fuller's right-wing cross fell to Bennette, who fired a shot into the goal that Luis López blocked.
9:26 PM2 months ago

Good play by Honduras and the Costa Rican defense ends up conceding a corner kick.
9:21 PM2 months ago

The referee adds two minutes to the first half.
8:45 PM2 months ago

Lopez's save prevents Costa Rica's second goal after a series of rebounds in the area.
8:42 PM2 months ago

First half hour of the match and the Hondurans are already up looking for the equalizer.
8:33 PM2 months ago

The medical assistants come in to attend to Romell Quioto.
8:26 PM2 months ago

Joel Campbell's shot goes over the goal.
8:17 PM2 months ago

Bryan Moya's shot was saved by Keylor Navas. The Bicolor came out to press from the start.
8:14 PM2 months ago

Alberth Elis and Romell Quioto got together, the defense rejected the ball and it was left to Kevin Álvarez who sent a cross that crossed the entire area until it escaped through the end line.
8:06 PM2 months ago 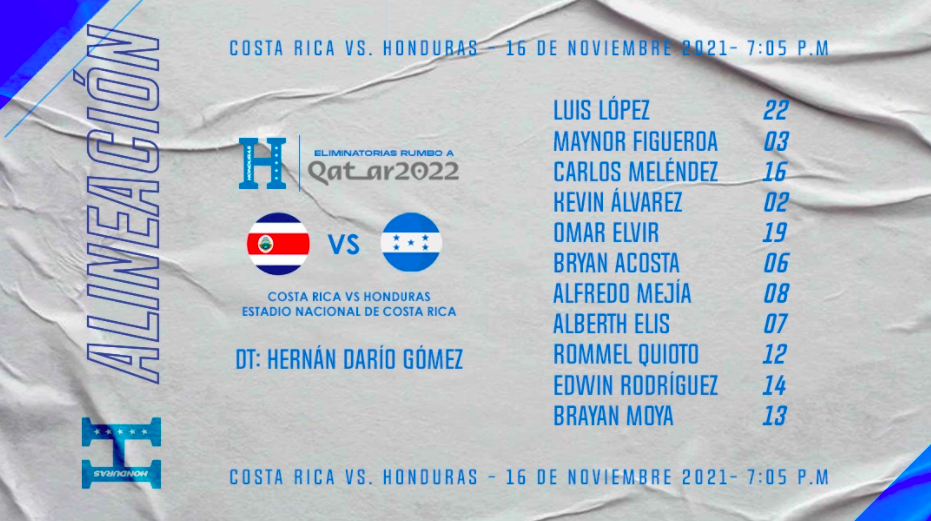 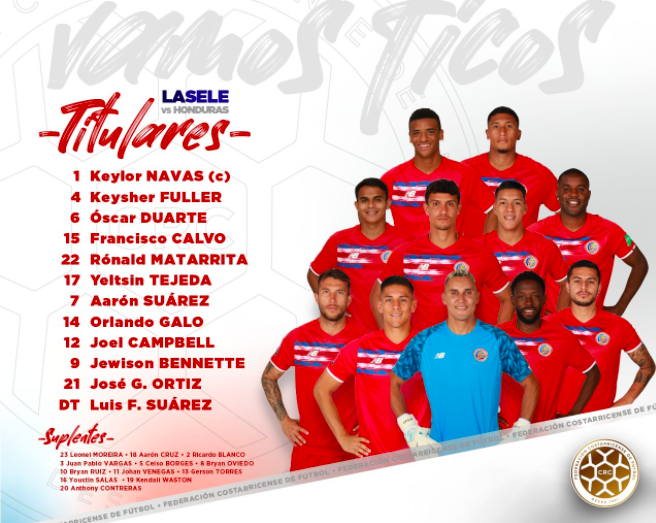 The players of both teams are already on the stadium's field doing warm-up exercises. 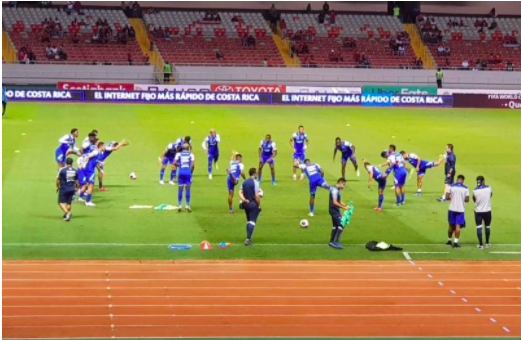 The Costa Rican team is fifth with 6 points, five points behind Panama, whose fourth place for the moment gives them the right to play in an intercontinental playoff. The top three in the round of three will qualify directly for Qatar 2022.
7:41 PM2 months ago

Both players of the Costa Rican and Honduran national teams have arrived at the National Stadium of Costa Rica with the respective sanitary measures. 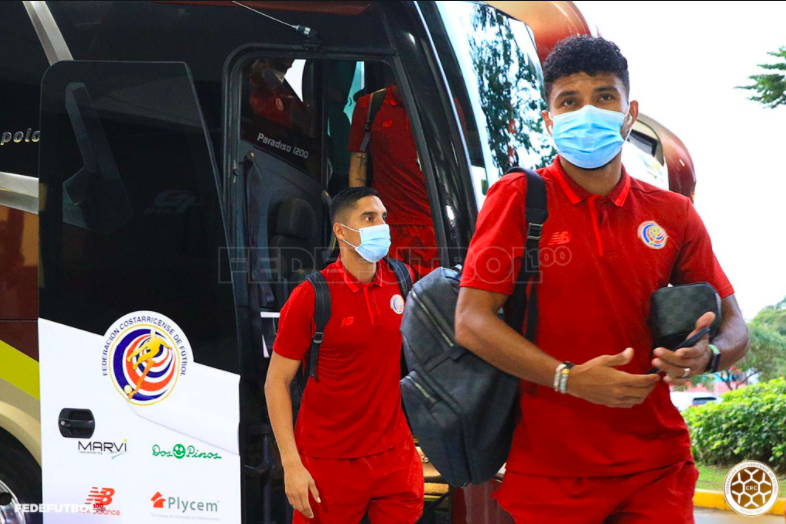 Costa Rica will be missing the elbow injury to its captain and key player, Keylor Navas, PSG goalkeeper.
7:31 PM2 months ago

With the respective sanitary measures, both Costa Rican and Catracho fans are beginning to arrive at the National Stadium of Costa Rica for this afternoon's match. 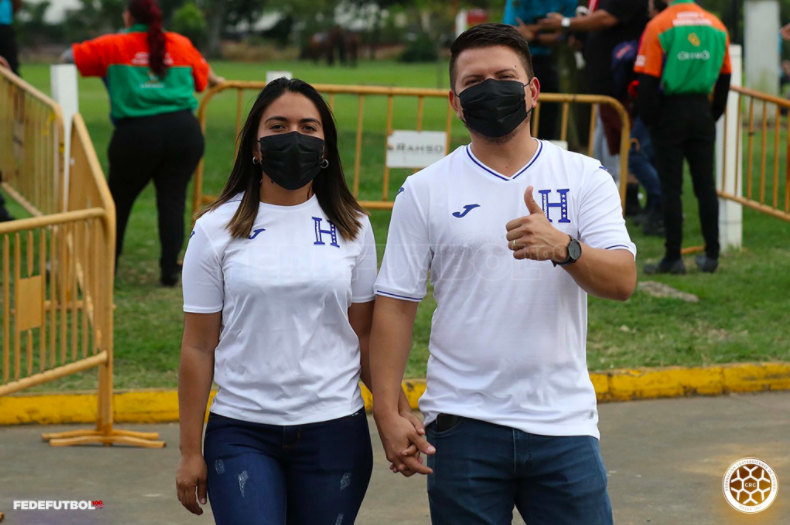 The history of confrontations between these two teams gives a total of 61 matches, where 21 wins have been for the Costa Rican team to 18 wins for the Honduran team and 22 draws. This rivalry is quite even. In the most recent match they tied scoreless.
7:21 PM2 months ago

The National Stadium of Costa Rica is a venue for multiple sports and administrative uses, being the main stadium for the Costa Rican National Team's soccer practice and for athletics competitions. It has a capacity for 35 thousand spectators and was inaugurated in March 2011. 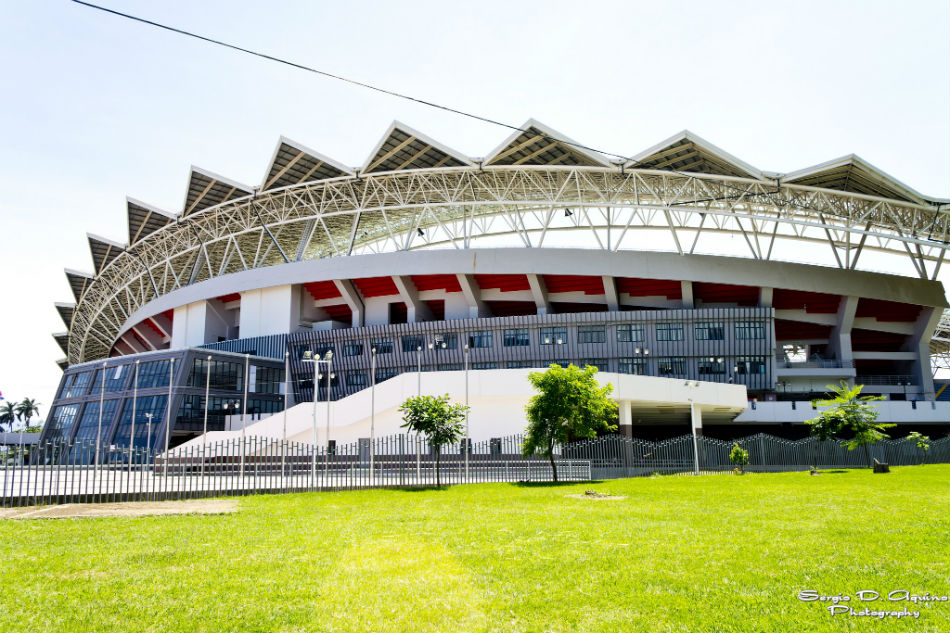 We are just under an hour away from the start of the Costa Rica vs Honduras CONCACAF World Cup Qualifying match at the Estadio Nacional in Costa Rica. Honduras wants to get out of the bottom of the table while the Ticos do not want to leave the playoff zone. Will one of them win? Follow our coverage on VAVEL USA.
7:11 PM2 months ago

Do not miss a detail of the match Costa Rica - Honduras with the live updates and commentaries of VAVEL. Follow along with us all the details, commentaries, analysis and lineups for this match.
7:06 PM2 months ago

How to watch Costa Rica - Honduras Live Stream on TV and Online?

If you want to watch the game Costa Rica - Honduras live on TV, your options are: Telemundo Deportes

If you want to directly stream it: Telemundo App and Paramount+

Alberth Elis | The Honduran striker, who plays for Bordeaux in the French league, has been a wet blanket for his national team. However, this year the striker was Costa Rica's executioner and helped them to snatch third place in the Nations League. However, the team's record has remained at zero and they need to find the goal again to avoid being at the bottom of the table. 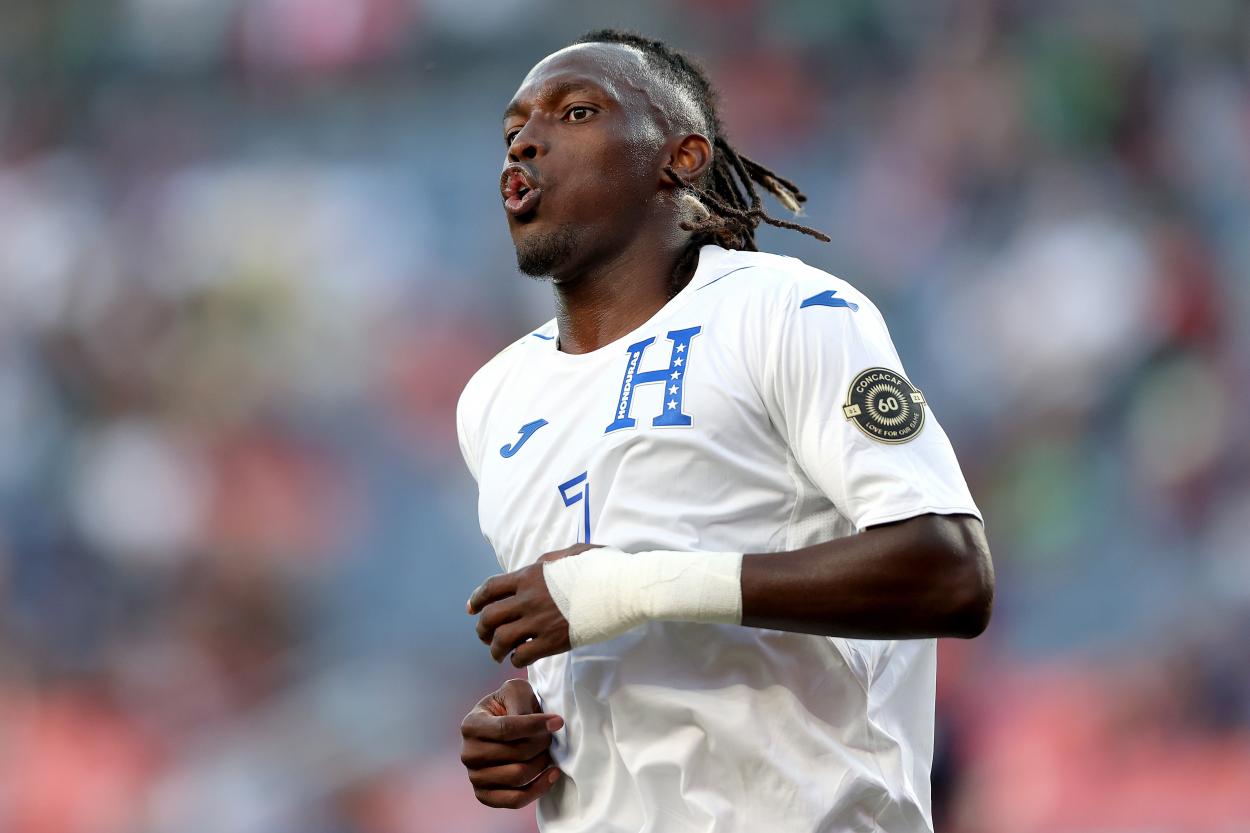 Leonel Moreira | After the absence of Keylor Navas due to injury, Moreira must be the keeper of the Costa Rican goal and, despite the inattention he had last game that cost him the goal against Canada, Leonel will have to recover and vindicate himself today against Honduras so that his national team can climb up the rankings. 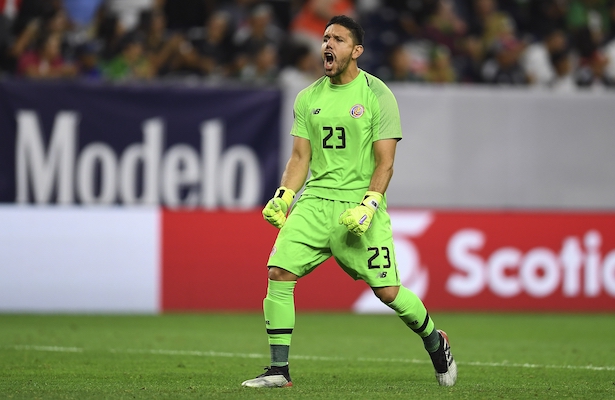 How does Honduras arrive?

On the other hand, the Honduras team led by Hernán Gomez, who took over the helm of 'La H' a few days ago, is not getting any better even with the change of coach. Bolillo' Gomez saw how his pupils squandered a two-goal lead and lost 3-2 to Panama last Friday. The Hondurans are in last place in this CONCACAF octagonal and even if they win this afternoon, they will not be able to leave the bottom. Honduras has not won in these qualifiers and has accumulated only three points from three draws and four defeats. 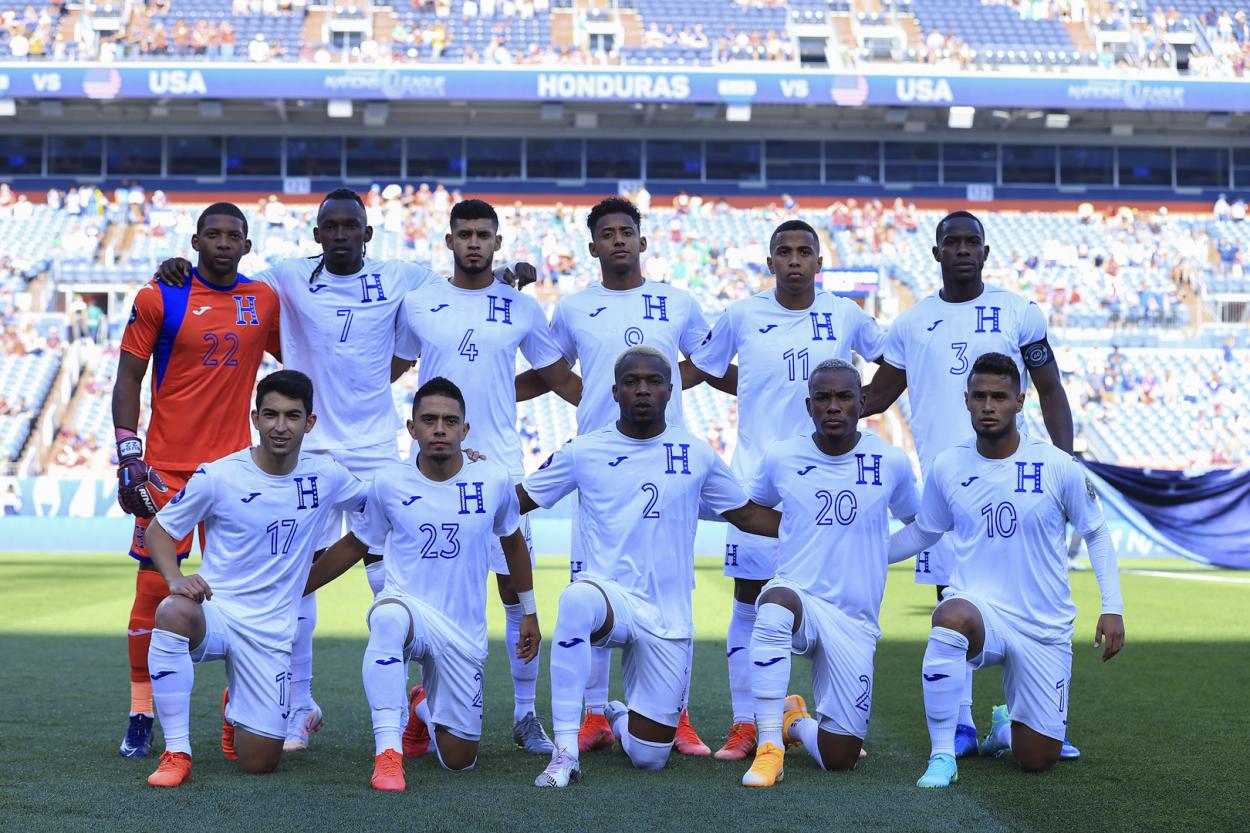 How does Costa Rica arrive?

The Costa Rican national team coached by Luis Fernando Suarez wants to take advantage of its home advantage and get a victory that it has not achieved in three matches. Costa Rica is coming off a 1-0 loss to Canada in its visit to Edmonton and has not been able to win since its last victory against El Salvador in matchday 5. The Ticos are in fourth place with 6 points after one win, three draws and three defeats. 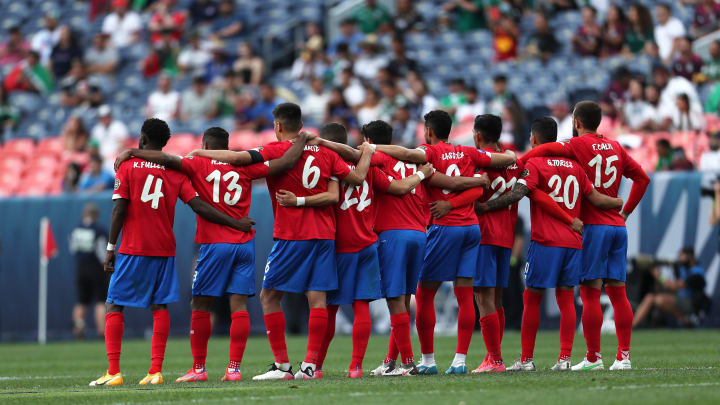 The Costa Rica vs Honduras match will be played at the Estadio Nacional de Costa Rica, in San Jose, Costa Rica. The kick-off is scheduled at 20:05 pm ET.
6:21 PM2 months ago

This afternoon, the 8th matchday of the CONCACAF Qualifying Round will feature a game where one team is in need of three points. The Costa Rican national team needs a victory to stay on the heels of Panama and thus not leave the playoff positions. While Honduras will want to get the three points in this qualifying round. They have not achieved a victory after eight rounds.
6:16 PM2 months ago