NOR0
END19 hours ago

Thank you for listening to another Premier League match here on VAVEL. Have a good afternoon and see you next time!
11:56 AM16 days ago

Wilson received on the right and shot hard, but sent it over the goal.
11:49 AM16 days ago

Substitution at Brentford: Janelt left and Baptiste came in.
11:44 AM16 days ago

And there was a yellow card for Norgaard for a foul that had an advantage in the midfield.
11:41 AM16 days ago

Substitution at Brentford: Roerslev leaves for Goode.
11:36 AM16 days ago

Fraser crossed from the right and Saint-Maximin, alone, came to the left and sent it into the back of the net!
11:32 AM16 days ago

Double substitution at Newcastle: Willock and Schar left to enter Fraser and Longstaff.
11:28 AM16 days ago

Saint-Maximin received on the left, took it deep and crossed hard, with Janssen deflecting, but goalkeeper Fernandez got it on the scramble!
11:22 AM16 days ago

Onyeka, who had just entered, got the ball in the box and shot hard. It deflected off Lascelles and into the goal, ending Darlow's chances of saving it!
11:20 AM16 days ago

Saint-Maximin received on the left and hit a cross, placed, but out, on the left side of the goal!
11:19 AM16 days ago

Substitution at Brentford: Ghoddos left and Onyeka came in.
11:06 AM16 days ago

Callum Wilson is yellow-carded for a step on Jansson.
11:05 AM16 days ago

Toney takes the first touch on the ball and it rolls into the second half!
11:04 AM16 days ago

The teams reappear on the field for the ball to roll once again.
10:51 AM16 days ago

In a four-goal first half, Newcastle and Brentford go on to tie the match!
10:46 AM16 days ago

Saint-Maximin took off from the left, took it to the middle and hit it hard, but over the goal!
10:45 AM16 days ago

Yellow card to Ghoddos for a foul on Wilson on the right. The free-kick was crossed into the box, there was a deflection and Fernández was not good with the ball, with it going to Willock, who hit it hard, but over the defense!
10:41 AM16 days ago

Saint-Maximin received on the left, took to the middle and hit hard. The ball exploded on the defense and fell to Joelinton, who hit it hard, in the right corner, equalizing the match!
10:39 AM16 days ago

Toney hit the ball hard from the edge of the box and sent it into the hands of Darlow.
10:34 AM16 days ago

Canós' cross from the right was dangerously placed, and Henry went high and headed hard into the back of the net!
10:28 AM16 days ago

Mbuemo received on the left and crossed hard, but goalkeeper Darlow deflected. On the rebound Toney hit it hard and beat the defender on the line!
10:23 AM16 days ago

Saint-Maximin's powerful shot was blocked by Fernández.
10:21 AM16 days ago

Mbeumo received inside the penalty area and hit a cross, hitting the right post. In the rebound Toney put it into the net, but he was offside and the goal was disallowed.
10:13 AM16 days ago

Toney received the ball inside the box, on the right, and hit a cross, to beat goalkeeper Darlow and tie the match!
10:11 AM16 days ago

At the cross coming from the corner from the right, Lascells was higher than everyone and headed hard into the back of the net, into the right corner, with no chance for the goalkeeper!
10:08 AM16 days ago

Now it was Canós' turn to finish off a cross, this time low, to send the ball into the left side of the goal.
10:04 AM16 days ago

Wilson received a cross from Joelinton, who had stolen the ball on the right, and headed hard, but out of the left corner!
10:01 AM16 days ago

Callum WIlson makes the first touch on the ball and it rolls into the first half of the match!
9:56 AM16 days ago

The teams appear on the field to start the match!
9:45 AM16 days ago

The players leave the pitch to finish their preparation and then return to the field for the game to begin.
9:36 AM16 days ago

At the same time of this match there will be many others, with Burnley vs Crystal Palace, Aston Villa vs Brighton, Watford vs Manchester United, Wolverhampton vs West Ham and Norwich vs Southampton.

The round started earlier today, with Chelsea's 3-0 win over Newcastle.
9:26 AM16 days ago

The players appear on the field to begin their warm-up work.
9:16 AM16 days ago

Brentford is scheduled and comes to the field with: 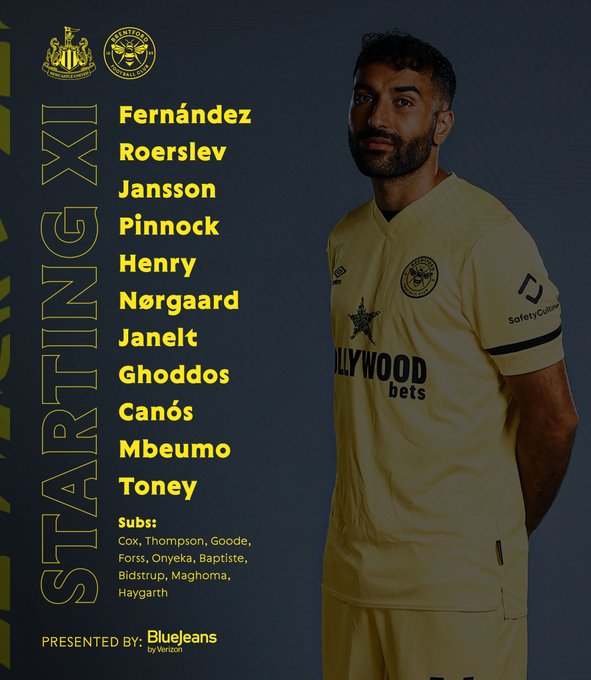 Newcastle is scheduled and comes to the field with: 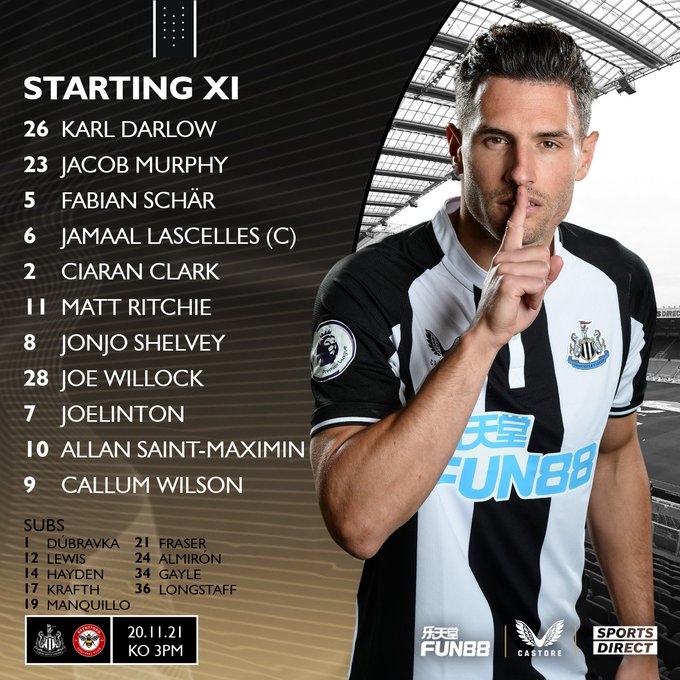 Now the broadcast of the Premier League match between Newcastle and Brentford begins!

Do not miss a detail of the match with the live updates and commentaries of VAVEL. Follow along with us all the details, commentaries, analysis and lineups for this Newcastle vs Brentford match.
8:56 AM16 days ago

How to watch Newcastle vs Brentford Live in TV and Stream

If you want to watch the game Newcastle vs Brentford live on TV, your options is: none.

If you want to directly stream it: Streaming services and Peacock app.

What time is Newcastle vs Brentford match for Premier League?

This is the start time of the game Newcastle vs Brentford of 20th November 2021 in several countries:

Brentford probables for the match are: Fernandez, Goode, Pinnock and Jansson; Canos, Janelt, Norgaard Onyeka and Henry; Toney and Mbeumo.
8:36 AM16 days ago

Newcastle probables for the match are: Dubravka, Manquillo, Clark, Lascelles and Ritchie; Almiron, Hayden, Shelvey and Fraser; Wilson and Saint-Maximin.
8:31 AM16 days ago

Newcastle's only certain absence is Paul Dummet, who is injured. Ryan Fraser is also doubtful for the match with a calf problem. As for Brentford Zakna, Ajaer and Raya are injured and out of action.
8:26 AM16 days ago

In the Premier League both teams are fighting against relegation. Brentford is in 14th place with 12 points, two behind Southampton and one ahead of Leeds, and two ahead of Aston Villa and Watford. Newcastle, meanwhile, is only five points behind, tied with last-placed Norwich, and three points behind the first team in the Z-4, Burnley, in 19th position.
Embed from GioScore
8:21 AM16 days ago

Brentford, on the other hand, have suffered two defeats before the FIFA date, on the same days that Newcastle played. On the sixth day the defeat was to Norwich, 2-1, with Normann opening the scoring, Pukki enlarging for Norwich and Rico Henry scoring in the second half. And on the 30th the score followed suit. Against Burnley Wood opened the scoring, Lowton and Cornet added to their lead, while Ghoddos pulled one back in the end.
8:16 AM16 days ago

Prior to the FIFA date, Newcastle had not been in good form, recording a loss and a draw in their last two games. The draw was on November 6, against Brighton, 1-1, with Trossard opening the scoring for Brighton and Hayden equalizing. And before that, on November 30, the defeat was at home to Chelsea, 3-0, when James, twice, and Jorginho scored the goals.
8:11 AM16 days ago

Philadelphia Union hit by COVID protocols; three brought in through Extreme Hardship for Eastern Final against NYCFC a day ago
//