Thank you for listening to this Europa League match. Have a good afternoon and see you next time!
2:41 PMa year ago

In the last round both teams play on Thursday (9). Ferencváros hosts Leverkusen and Betis visits Celtic.
Embed from GioScore
2:37 PMa year ago

With goals from Tello and Canales, Betis beat Ferencváros and takes the group decider to the last round!
2:33 PMa year ago

Substitution in Ferencváros: Zachariassen and Nguen left for Gavric and Szantho. And right after that Laidouni took a long shot and Rui Silva got it.
2:22 PMa year ago

Laidouni is yellow for leaving his arm on Canales in the middle of the field. And Ferencváros had a substitution: Botka left and Wingo came in.
2:17 PMa year ago

At the corner from the left, the ball was deflected in the middle and Guardado managed to get a header, but sent the ball over the goal!
2:15 PMa year ago

Substitution in both teams. In Betis Vecsei and Ryan Mmaee left for Mak and Laidoun. In Betis left Claudio Bravo Joaquín to the entry of Rui Silva and Lainez.
2:09 PMa year ago

Substitution in Betis: González left and Guardado came in.
2:08 PMa year ago

Canales received the ball on the edge of the box and shot, but it fell into the hands of Dibusz.
2:06 PMa year ago

Tello received in the midfield, pedaled and got the defender out of the play, and hit hard, but Dibusz saved for a corner! Then Tello hit the ball from outside the area and sent it over the goal!
1:55 PMa year ago

Canales received on the right, got the defender off, and hit a hard shot into the right corner, with no chance for the goalkeeper!
1:51 PMa year ago

Vecsei, for a slide in the field of attack, received a yellow for the foul.
1:47 PMa year ago

Mmaee gets the first touch on the ball and it rolls into the second half!
1:47 PMa year ago

The teams appear on the field to start the second half.
1:33 PMa year ago

Little happened in the last 15 minutes, with no clear chances for either team, with the first half ending in 45 minutes, without extra time!
1:17 PMa year ago

Borja Iglesias received a long throw-in from Bravo, took hold of it and came out in front of Dibusz, but hit the goalkeeper, who saved Ferencváros!
1:06 PMa year ago

Canales took another chance from outside the area and sent it very dangerously to the left!
1:01 PMa year ago

Canales took a chance from outside the area and sent it over the goal.
12:55 PMa year ago

Mmaee received in front, took off and hit a cross, but in the hands of Bravo!
12:53 PMa year ago

Nguen received the ball in the middle, carried it, and hit a cross, which was sent out to the left side of the goal!
12:52 PMa year ago

Joaquin found Bellerín got the cross from the right and found Tello in the middle, for the shot into the empty goal, with no chance for anyone to get it out!
12:45 PMa year ago

Borja Iglesias makes the first touch on the ball and it rolls into the first half of the match!
12:43 PMa year ago

The teams appear on the field to start the match!
12:22 PMa year ago

And closing the round today are Ranger vs Prague, PSV vs Sturm, Leicester-Legia Warsaw, Eintracht-Antwerp, Monaco vs Real Sociedad and Brondby-Lyon.
12:22 PMa year ago

Round five of the Europa League started yesterday, with a single match, with Spartak Moscow beating Napoli 2-1.

The players take to the field to begin their warm-up exercises.
12:00 PMa year ago

Betis is lined-up for the match and will start with: 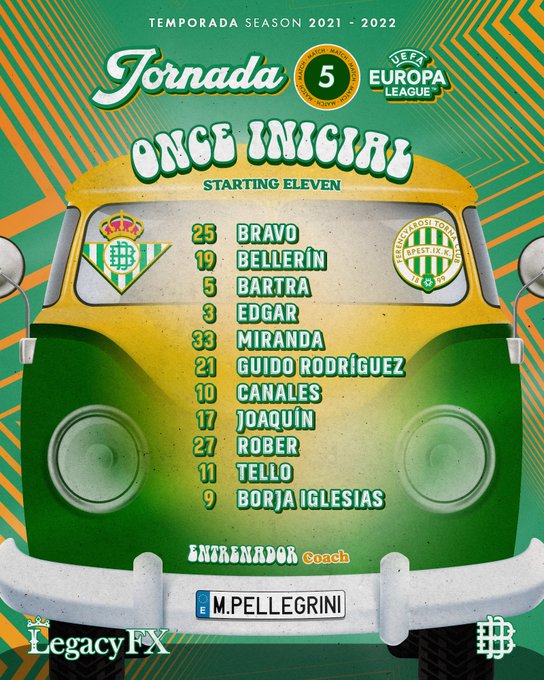 Now the broadcast of the Europa League match between Betis and Ferencvaros begins!

Do not miss a detail of the match with the live updates and commentaries of VAVEL. Follow along with us all the details, commentaries, analysis and lineups for this Betis vs Ferencvaros match.
11:40 AMa year ago

How to watch Betis vs FerencvarosLive in TV and Stream

If you want to watch the game Betis vs Ferencvaros live on TV, your options is: none.

If you want to directly stream it: Streaming services and  TUDN App, TUDN.com, TUDNxtra, Paramount+ app.

What time is Betis vs Ferencvaros match for Europa League?

This is the start time of the game Betis vs Ferencvaros of 25th November 2021 in several countries:

Ruddy Buquet will referee the match, with Guillaume Debart and Cyril Mugnier at the flags. The VAR will be led by Delajod Willy, with everyone coming from France.
11:25 AMa year ago 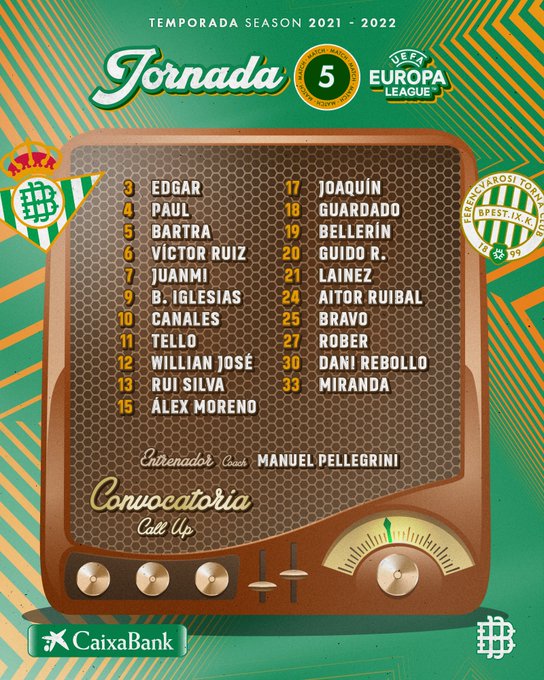 Betis will be without the suspended Fekir and the injured Guido Rodríguez, Pezzella, Sabaly, and Camarasa. Meanwhile, Ferencvaros will have only one absentee: Siger.
11:10 AMa year ago

Bayer Leverkusen lead group G with 10 points, followed by Betis, who have seven. In third are Celtic, with six, and just behind are Ferencvaros, with no points.
11:05 AMa year ago

Betis comes from a loss and a win in the last two games. Before the stoppage for the FIFA date, Sevilla won 2-0 at the home of Betis, with goals from Acuña and Bellerín, against. After the stoppage Betis visited Elche last Sunday (21) and won 3-0, with goals from Juanmi, Willian José and Fekir.
10:55 AMa year ago