Thank you for following the coverage on VAVEL.COM.

We hope you enjoyed our coverage of the New England Revolution and NYC FC MLS Play Offs. Continue to visit the VAVEL website to keep up to date with all the information throughout the day.
10:33 PMa year ago

The match is over! After a great duel between New England Revolution and NYC FC, the team from the Big Apple advance to the Eastern Conference final and are one step away from advancing to the MLS Cup.

The match could not be defined in extra time and everything will be decided from the 11 penalty kicks.
10:13 PMa year ago

From hero to villain! The scorer of the second goal fouled Buchanan and was sent off.
10:04 PMa year ago

NYC FC GOAL! CASTELLANOS ARRIVES AND SENDS THE BALL INTO THE BACK OF THE NET WITH A LETHAL HEADER. NEW YORK IS CLOSE TO THE FINAL.
10:01 PMa year ago

The second half of extra time begins, if neither team scores, we will go to penalty kicks.
9:57 PMa year ago

At the end of the first 15 minutes of overtime, we are getting closer and closer to the penalty kicks.
9:47 PMa year ago

Maxi's shot goes just wide of the posts, but the visitors keep coming!
9:40 PMa year ago

The first overtime of the second Eastern Conference semifinal begins.
9:36 PMa year ago

We are going to 30 more minutes of soccer, the game could not be defined in regular time and the excitement will be extended for more time.
9:26 PMa year ago

LAST 10 MINUTES OF THE MATCH! All or nothing for both clubs, it's the last chance to avoid overtime.
9:12 PMa year ago

NEAR NEW ENGLAND! Gustavo Bou took a shot inside the six-yard box towards the goalkeeper's far post and his shot was well saved by the keeper.
9:08 PMa year ago

NYC FC CLOSE TO SECOND! Maxi gets on the end of a superb cross and sends his shot just wide of the goalkeeper's post.
8:59 PMa year ago

Santi Rodríguez took a dangerous shot, but the goalkeeper correctly recovered the ball.
8:51 PMa year ago

The second half begins between New England and NYC FC, they will have to go for everything in these last 45 minutes if they don't want to go to overtime.
8:33 PMa year ago

The first half ends between New England Revolution and NYC FC, both teams are tied at halftime.
8:22 PMa year ago

NYC FC has arrived again! Castellanos' shot looks to break the net but the attempt goes into the stands.
8:09 PMa year ago

The one NYC FC let go! Medina blasts a shot over the top of the net after leaving the keeper beaten and with an open goal.
8:00 PMa year ago

In this way Buksa made things even in the match.

GOAL FOR THE NEREVS!
Buksa wins the ball in the air after a great free kick to tie the match.
7:54 PMa year ago

THIS IS HOW THE GOAL WAS SCORED

NEW YORK CITY GOAL!
Rodriguez takes the penalty spot and sends the ball mercilessly into the back of the net to put the visitors ahead.
7:46 PMa year ago

The match between New England Revolution and NYC FC kicks off, both teams are dreaming of being in the Eastern Conference Final.
7:27 PMa year ago

In a couple of moments we will begin the broadcast of the New England Revolution vs NYC FC in search of a place in the Eastern Conference Grand Final.
7:15 PMa year ago

So far in the MLS thanks to their responsible approach New York City FC won 14 matches, lost 11 and drew 9, therefore, the fact that after 35 matches they are now among the leaders of the championship is not surprising at all. Their high position is also explained by the goal statistics: 1.7 goals scored and 1 conceded on average per game. In home (away) matches they are more dangerous after 46-60 minutes, during this period they scored 9 goals, but in the same time from 60-75 minutes of the match, they have obvious problems with the defense of their goal, because they conceded 16 goals. Obviously, having such statistics it is worth expecting a beautiful and entertaining game from the team.
7:10 PMa year ago

After 34 games in MLS, New England Revolution managed to consolidate the leadership, having quite impressive statistics: 22 wins, 7 draws and 5 losses. The team is now in a simply excellent state, and hopefully in the near future will not be overshadowed by anything. New England Revolution runs the most efficient period at 76-90 minutes of each game this season. They have scored 10 goals in this time. It is clear that this club wants to add three more to their existing 73 points, and we will soon find out if they will be able to and thus further strengthen their position.
6:58 PMa year ago

This is how the visitors will line up in search of their ticket to the big game of the Eastern Conference. 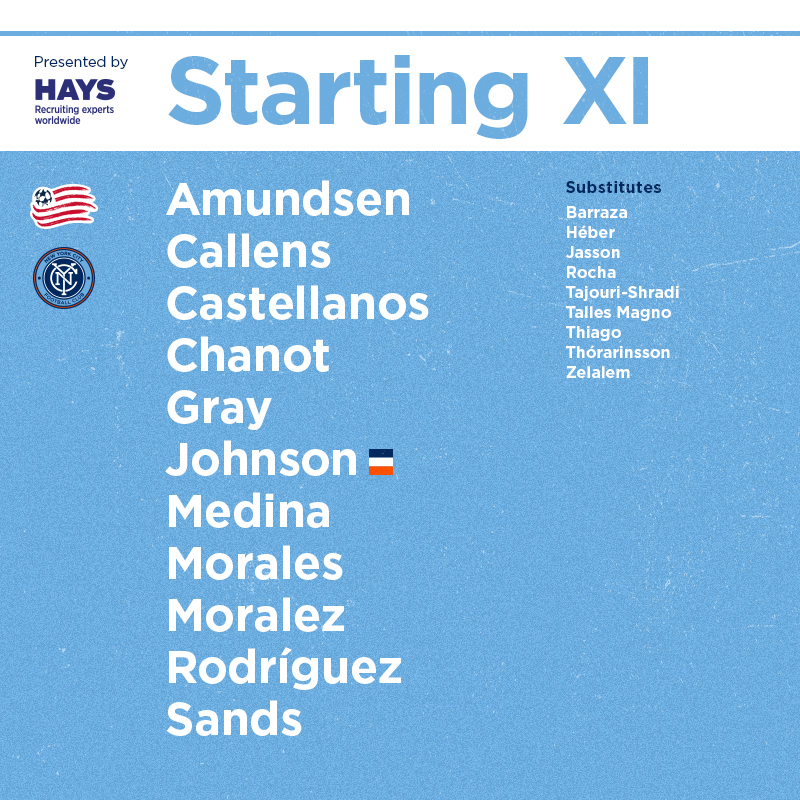 This is how the home team will start today to face the playoffs on their home field and in front of their home crowd. 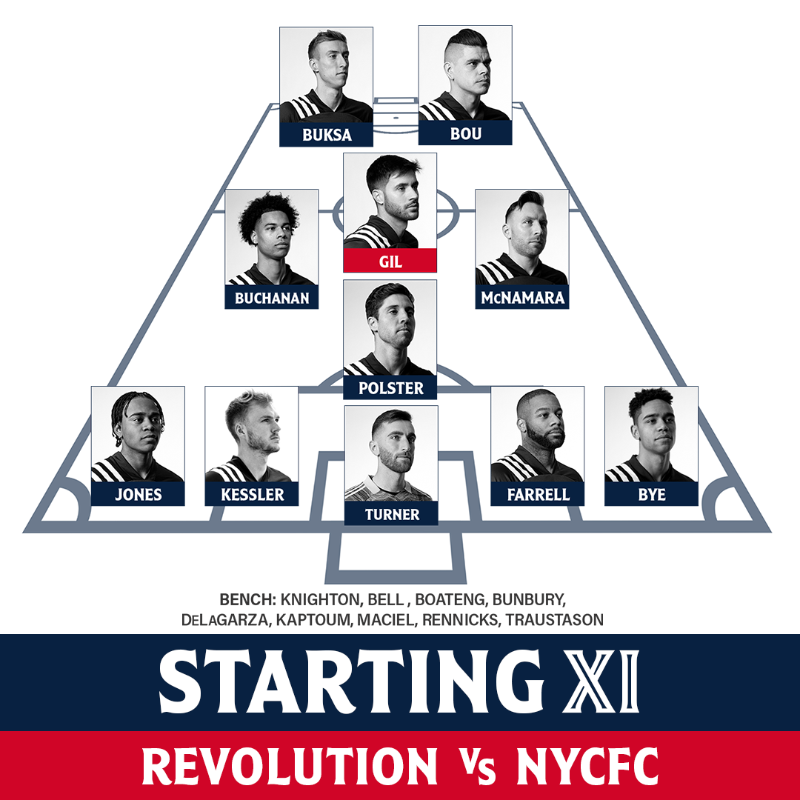 The last head-to-head confrontation was recorded on September 11, 2021 and that match ended with the score 2:1. Overall, during all encounters, 20 matches the teams played to win. New England Revolution was successful in 9 matches, while New York City FC was stronger in 7 matches, and the remaining 4 matches ended in a draw. Also, let's not forget about the goals scored and conceded stats: 26-25. Now let's see what state the teams are in.
6:46 PMa year ago

This is what it looks like today at Gillete Stadium, home of the New England Patriots and the Revolution to host a conference semifinal.

THEY ARE ALREADY IN THE STADIUM!

The New York City FC team is already inside Gillette Stadium to face what will be their most important match of the season so far. 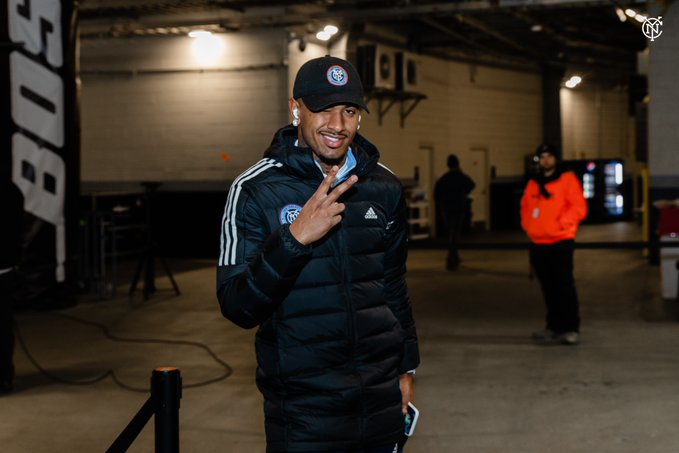 The wait is over, today begins the MLS conference semifinals between New England Revolution and NYC FC in the Eastern Conference. Both clubs are just one step away from reaching the final of their respective championships and have the opportunity to earn a direct ticket to the coveted match: the MLS Cup Final.
6:31 PMa year ago

Do not miss a detail of the match with the live updates and commentaries of VAVEL. Follow along with us all the details, commentaries, analysis and lineups for this New England vs NYC FC match.
6:26 PMa year ago

What time is New England vs NYC FC match for MLS?

This is the start time of the game New England vs NYC FC of 30th November in several countries:

Watch out for this New York City FC player:

Valentín Castellanos will be the player to follow for these conference semifinals, the Argentinean born in the city of Mendoza became one of the most decisive players for the New York City FC team because throughout this season he played 2,722 minutes in which he started 32 times, scored 19 goals and assisted 9 times, he also had 9 yellow cards and 0 red cards. 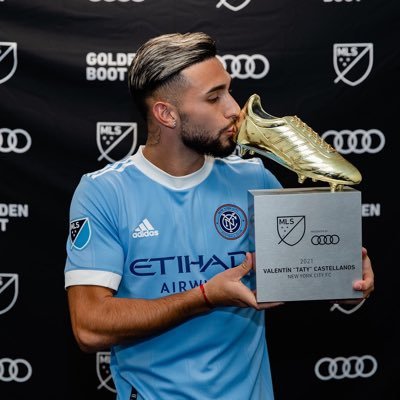 Watch out for this New England Revolution player:

The experienced Argentinean player and forward, Gustavo Bou, will be the player to follow for this match, he totaled throughout the campaign 2,327 minutes in which he obtained 30 games as a starter, 15 goals and 8 assists, also, he had 2 yellow cards and 0 red cards. 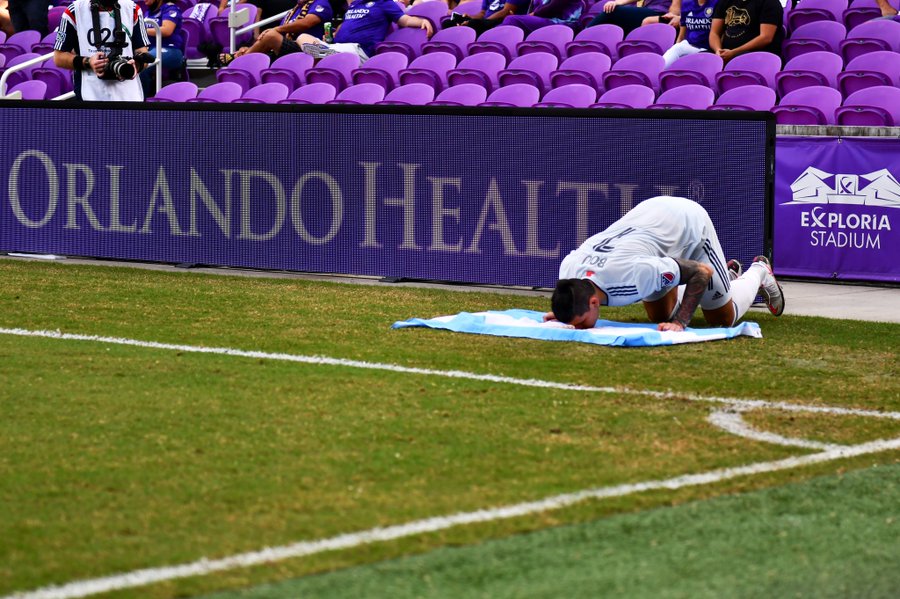 The New England Revolution and New York City FC have met on a total of 19 occasions (9 wins for New England, 4 draws and 6 wins for New York City) with the scales tipping slightly in favor of the home side, making this one of the most evenly matched duels in the Major League Soccer Play Offs. In terms of goals, in the 19 matches played since 2015 there have been goals, with a total of 49 goals scored, 26 goals in favor of the home side and 23 in favor of the visitors. Their last duel dates back to matchday 6 of the current season, the match was played in the city of Chicago where the home side won 2-1.
5:56 PMa year ago

For this match, Anthony Taylor will be the center referee, accompanied by Gary Beswick and Adam Nunn as assistants 1 and 2 respectively, and Craig Pawson will be the fourth official. In the VAR, referees Stuart Attwell and Constantine Hatzidakis will be in charge of monitoring any dubious play inside the box or that merits a red card.
5:51 PMa year ago

Seeking to advance to the conference final

On the other hand, New York City FC went from strength to strength so far this season and everything seems to indicate that they will be looking to continue with the same rhythm to seek a place in the next phase of the MLS play offs. They are also in high spirits after having beaten Atlanta United at home, so it will be an important mission to get on the Gillette Stadium turf and take the first place of the competition out of the tournament. The Citizens finished the MLS regular season in fourth place in the Eastern Conference with 51 points from 14 wins, 9 draws and only 11 defeats. They also registered 56 goals for and 36 goals against, a figure that makes them one of the most solid defenses in the Play Offs, so it will be of vital importance to go into Gillette Stadium with a defensive wall, as their rivals are one of the most powerful offensive teams in MLS. 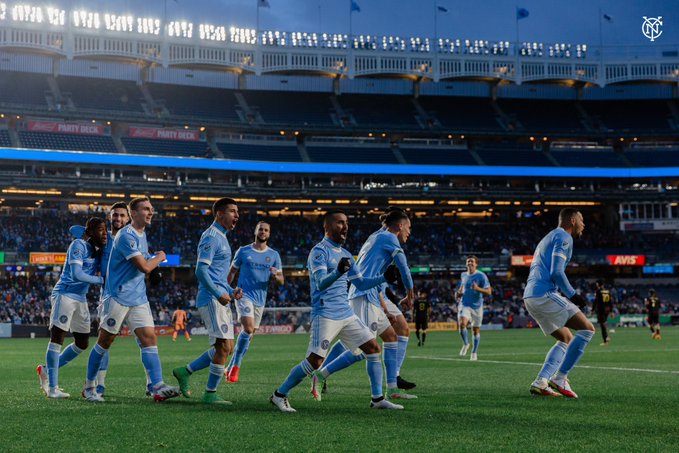 The New England Revolution will be looking to use their home advantage to their advantage on the field and on the scoreboard to have an advantage over their opponents from minute 1. The Chicago team finished the season in first place in the general table of the Eastern Conference with 73 points, the result of 22 wins, 7 draws and 5 defeats, and also recorded 65 goals for and 41 goals against, a statistic that leaves them with a positive difference of 24. Likewise, it is worth remembering that this is one of the most regular teams that have been presented lately in MLS, also, they will seek to get into the next competition of the Skotibank CONCACAF Champions League since they were one step away from advancing to that competition in the most recent contest, but for that they will have to dream big and with the Major League Soccer crown. 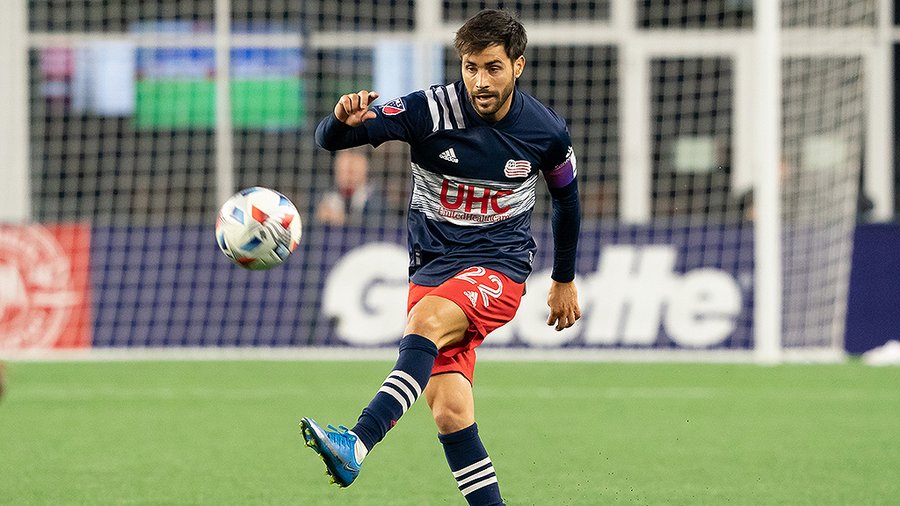 The most important part of the road has arrived for both clubs, the regular season is over and now there is nothing left but to fight for the title, however, to do so they will have to pass the first obstacle which is the first round of the Play Offs and thus have the opportunity to access the MLS conference semifinals. There are already rivals waiting for them, so the public is waiting to see who will deserve to be alive for another round of the season. In their last match, New England lost by the minimum difference against Inter Miami and New York City FC drew 1-1 with Philadelphia Union.
5:36 PMa year ago

The New England vs NYC FC match will be play in the Gillette Stadium, in Chicago, USA. The kick-off is scheduled at 19:30 pm ET.
5:31 PMa year ago

Welcome to VAVEL.com’s LIVE coverage of the 2021 MLS: Nashville vs Orlando!