New York City came from behind to beat Philadelphia Union as visitors, and thus become the new champion of the Eastern Conference of Major League Soccer.

After that, they will enter the MLS Cup 2021, where they will face Portland Timbers next weekend.

Talles Magno scores to turn the score around and put his team on course for the title.
4:42 PMa month ago

Maximiliano Morález took advantage of an opponent's mistake to immediately level the score.
4:40 PMa month ago

With an own goal by Alexander Callens, the home team took the lead on the scoreboard.
4:39 PMa month ago

In a match with few chances of danger, Philadelphia Union and New York City FC are equalizing goalless.
4:06 PMa month ago

One minute of compensation is added.
4:01 PMa month ago

The game continues to lack excitement; both clubs continue to be unable to finish their moves.
3:51 PMa month ago

For the moment, New York City FC has looked better, having control of the match, but still without generating any dangerous chances.
3:46 PMa month ago

The game is underway!

The ball is rolling in Pennsylvania! Philadelphia Union and New York City FC are looking to become the 2021 MLS Eastern Conference champions.
3:41 PMa month ago

Here's how they finished the regular season!

The fans present at the stadium!

The home team's fans are already making themselves felt at home. They want their team to be champions today.

14 wins, 9 draws and 11 defeats: those indicators that allowed New York City FC to score 51 points and occupy the 8th place in MLS. On average, they score 1.1 away goals, but unfortunately, it is not enough to achieve maximum results. Their opponent should be as concentrated as possible between 46-60 minutes, as at this moment New York City FC has already scored 9 goals. And they are more attentive after 60-75 minutes, as they conceded 16 goals during this period of time. Let's see what else they can show us in this match.
3:16 PMa month ago

So far in the MLS thanks to their responsible approach Philadelphia Union won 14 matches, lost 8 and drew 12, therefore, the fact that after 34 matches they are now among the leaders of the championship is not surprising at all. Their high position is also explained by the goal statistics: 1.4 goals scored and 1 conceded on average per game. In home (away) matches they are more dangerous after 76-90 minutes, during this period they scored 8 goals, but in the same time from 46-60 minutes of the match, they have obvious problems with the defense of their goal, because they conceded 12 goals. Obviously, having such statistics it is worth expecting a beautiful and entertaining game from the team.
3:11 PMa month ago

THE FANS PRESENT IN SOMEONE ELSE'S STADIUM!

NYC FC fans are present in the vicinity of the opponent's stadium to support their team. They know they could make history today by winning their first conference title. 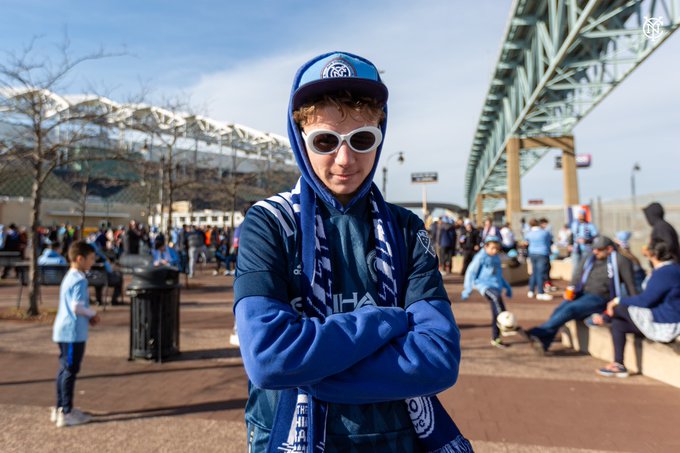 INTERESTING FACTS ABOUT THE PHILADELPHIA UNION

The last head-to-head meeting between the clubs took place on November 7, 2021 and the match ended with the score 1:1. If we look at the full head-to-head history, it indicates 16 games. In which Philadelphia Union came out victorious 5 times, while the club New York City FC won 9 times, in 2 matches the teams could not identify the stronger one and the matches ended in a draw. The statistics of goals scored and conceded show the following: 18-26. For a complete analysis, it is necessary to look at the current form of the teams.
2:51 PMa month ago

The wait is over, today we will know who will advance to the big MLS CUP match between Philadelphia Union and NYC FC. Both clubs have fought, suffered and worked hard to be present in this Eastern Conference Final and will undoubtedly fight for every ball until the final whistle.
2:46 PMa month ago

In a few moments we will share with you the starting Philadelphia Union vs New York City FC live, as well as the latest information from Subaru Park. Stay tuned for up-to-the-minute live coverage of the match on VAVEL.
2:41 PMa month ago

How to watch Philadelphia Union vs New York City FC Live Stream on TV and Online?

If you want to watch the game Philadelphia vs NYC FC live on TV, your options are ESPN.

If you want to directly stream it: ESPN+ and ABC App.

How did NYC FC qualify?

The team coached by Ronny Deila finished the first round in fourth place with 51 points; they then knocked out Atlanta United and, on penalties, the super leader New England Revolution.
2:21 PMa month ago

How did Philadelphia get there?

The team coached by Jim Curtin finished the regular season in second place with 54 points; later, they defeated New York Red Bulls in overtime and eliminated Nashville on penalties.
2:16 PMa month ago

For a place in the MLS Cup

This afternoon, in the state of Pennsylvania, Philadelphia and NYC FC will seek to become champions of the Eastern Conference, and thus reach the final for the Major League Soccer title, a stage in which Portland Timbers, who this Saturday became champions of the West after defeating Real Salt Lake, are already in.
2:11 PMa month ago

In addition to the finalists (Philadelphia Union and New York City FC), the other five clubs that advanced to the playoffs and have already been eliminated from this sector are New England Evolution, Nashville SC, Atlanta United, Orlando City and New York Red Bulls.
2:06 PMa month ago

The second phase of Major League Soccer is very close to concluding, as this is the penultimate match of the season; 14 teams have qualified, and today only three are still competing, and this Sunday only two will be the ones to compete for the MLS Cup.
2:01 PMa month ago

Portland Timbers claim the Western Conference; Will Host MLS Cup 2021 a month ago

Philadelphia Union hit by COVID protocols; three brought in through Extreme Hardship for Eastern Final against NYCFC a month ago

New England vs NYCFC preview: How to watch, team news, predicted lineups and ones to watch a month ago
//