We hope you enjoyed the Real Madrid vs Inter Milan matchday six of the UEFA Champions League group stage. Keep checking back on VAVEL.COM for updates throughout the day.
5:52 PM8 months ago

The match ended at the Santiago Bernabeu, Real Madrid triumphed on the last day of the UEFA Champions League group stage.
5:39 PM8 months ago

GOOOOOOL FOR REAL MADRID! MARCO ASENSIO TOUCHES HIS FIRST BALL AND SENDS IT INTO THE NET.
5:37 PM8 months ago

Madrid close to second place! Rodrygo took a shot looking for the goalkeeper's far post, but Handanovic made an incredible save with his left hand.
5:28 PM8 months ago

A cross into the box but Courtois comes out for the ball to take it.
5:23 PM8 months ago

TO THE SHOWERS! Nicolo Barella is sent off after a bad sporting attitude on the part of the Italian.
5:19 PM8 months ago

CHANGE AT INTER! The Chileans enter the field, Alexis Sanchez and Arturo Vidal.
5:14 PM8 months ago

Real Madrid came again, Vinicius Jr shot over the goalkeeper's head but his shot was unlucky not to go in.
5:05 PM8 months ago

Second half kicks off, Real Madrid continue to go ahead at the scoreboard, courtesy of Toni Kross.
4:47 PM8 months ago

The match ends on the Santiago Bernabeu pitch, Real Madrid leads 1-0 at the moment.
4:43 PM8 months ago

Inter try. Edin Dzeko sets up Ivan Perisic, who takes a shot with the inside of his head but his shot is blocked by Militao.
4:34 PM8 months ago

Attempt by Inter. Edin Dzeko headed without much power and the ball fell into the hands of Courtuis.
4:25 PM8 months ago

This is how Real Madrid's goal was scored - a gem of a finish by Toni Kroos!

GOOOOOOOOOL FOR REAL MADRID! Toni Kroos with a lethal left-footed shot from outside the area puts the ball just inside the goalkeeper's far post.
4:14 PM8 months ago

Dumfries took full advantage of the right flank to get into the six-yard box and put in a cross for Ivan Perisic, but his shot hit David Alaba and was cleared off the line by Luka Modric.
4:09 PM8 months ago

Marcelo Brozovic put his whole instep to a ball that was coming down and volleyed it to put the goalkeeper on alert. The attempt went just over the crossbar.
4:04 PM8 months ago

Madrid arrived, Vinicius Jr. arrived dangerously on the left flank and fired a shot that went just wide of the goalkeeper's post.
4:01 PM8 months ago

The match between Real Madrid and Inter Milan kicks off. Both teams will be looking for the leadership of the group.
3:45 PM8 months ago

In a couple of minutes we will start with the broadcast of the match Real Madrid vs Inter Milan; duel corresponding to the last day of the group stage of the UEFA Champions League.
3:43 PM8 months ago

Inter has added remarkably recently and even issued a series of 11 matches without defeats. In Serie a, they drew with Juventus and Milan and entered the race for the Championship. In the last round of the Champions league, the team beat Shakhtar Donetsk 2-0 with a dry score. Since then they have not lost even in three matches in the national championship.
3:26 PM8 months ago

Real Madrid achieved 10 victories in 11 matches. The only loss of points came in the league, where the team reached the top and was even able to separate itself from its pursuers. In this stretch they dropped two wins against Shakhtar Donetsk in the Champions league by 5-0, 2-1. In addition, the game at the Santiago Bernabeu was equal, and Madrid got lucky somewhere. And on the last matchday they took revenge against Sheriff for the defeat in the first round by 3-0.
3:20 PM8 months ago

The last four full-time matches went Real Madrid's way. In three of them, they did not even lose. This was the case in September, when the match of the first round of the Champions League was held. The only goal was scored by Rodrigo in the 89th minute, which gave Real Madrid the victory.
3:16 PM8 months ago

Inter Milan are also unbeaten in their last 11 games, only the Nerazzurri have nine wins and two draws. Still, they are equally if not more impressive than their upcoming opponents. This Saturday, Simone Inzaghi's side destroyed Jose Mourinho and Roma away (0-3), adding the fourth consecutive win without conceding a goal.

Meanwhile, Dzeko, Lautaro and the rest of the boys scored at least two goals in each of those outings. Inter had a bit of a slower start, but at this point, the Italian champions reached their top speed, and are putting on fantastic displays.

Believe it or not, they have only one away defeat since the start of the campaign, and that was against Lazio. In the other 10 matches, the Nerazzurri won seven times and recorded three draws.

THIS IS HOW THE REAL MADRID THING ARRIVES!

Real Madrid is not playing attractive soccer at all, but Los Blancos are winning. Right now, they have eight wins in a row, and 10 in the last 11 games, with one draw in between.

Los Madrileños have scored two or more goals on 10 occasions during this positive streak. As time went on, Ancelotti's side began to tighten up defensively, and on three of the previous four occasions, Courtois kept a clean sheet.

As for the efficiency of their matches, we can say that the most frequent result is 2 or 3 goals, happening seven times in the last 10 games. Once Real takes the lead, Ancelotti immediately changes tactics, slows down the pace and waits for counterattacking chances.

THIS IS HOW INTER LINES UP!

This is how Inter Milan will play, they want to ruin Madrid's party at home and with their people. 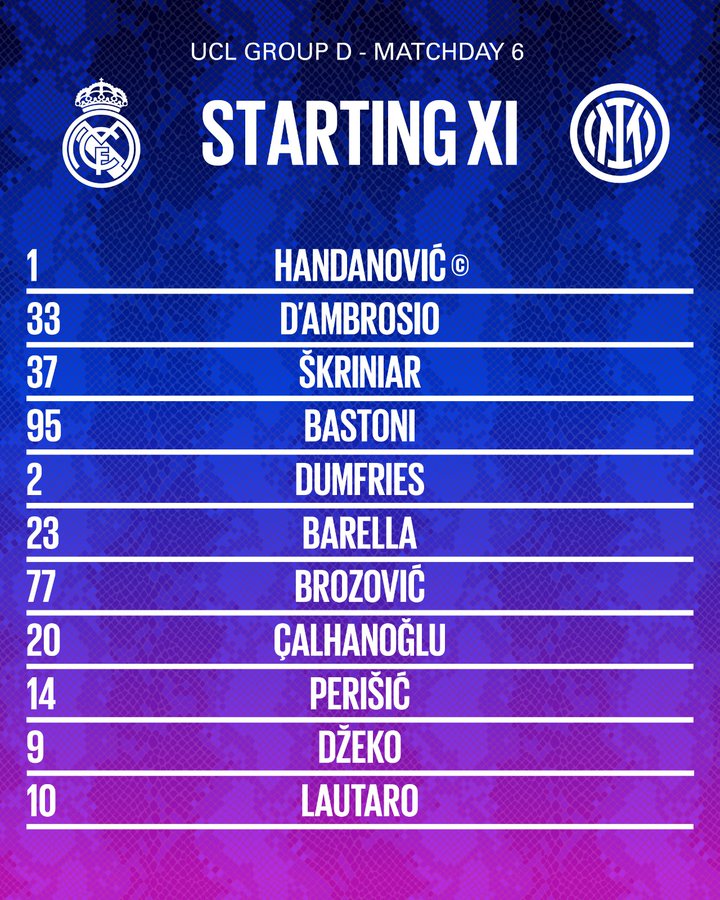 THIS IS HOW REAL MADRID LINES UP!

These are the eleven players that Carlo Ancelotti will field for the victory at the mythical Santiago Bernabéu. HALA MADRID! 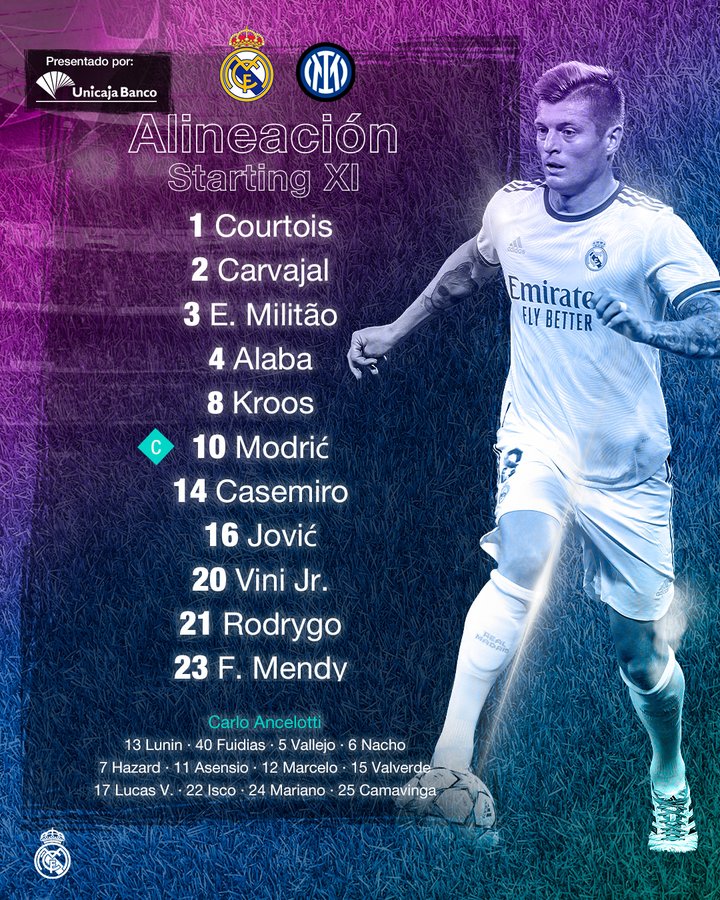 THIS IS HOW IT WORKS

Both Real Madrid and Inter Milan are in fantastic form, and their clash will be the derby of the entire round. The two powerhouses are about to decide the winner of Group D, with Real having a better chance of topping the group by virtue of winning the first match and having two more points.
3:00 PM8 months ago

The wait is over for Real Madrid and Inter Milan. Both clubs will return to action in the most disputed tournament at club level, both teams are already qualified and without risk of being out of the round of 16, in this match only the group leader will be decided.
3:22 PM8 months ago

Do not miss a detail of the match with the live updates and commentaries of VAVEL. Follow along with us all the details, commentaries, analysis and lineups for this Real Madrid vs Inter match.
3:17 PM8 months ago

What time is Real Madrid vs Inter match for UEFA Champions League match?

This is the start time of the game Real Madrid vs Inter of 7th December in several countries:

Watch out for this Inter player:

For this duel, youth could be the unbalancing factor that gives Inter the victory so Lautaro Martinez will be the player to watch in this match. The Argentine center forward has played 19 games so far in the competition, he has 8 goals and 2 assists with the blue and black team, also, he has been cautioned on 4 occasions and all this has happened in 1276 minutes played so Lautaro Martinez could tip the scales in favor of Inter and steal the lead from Real Madrid. 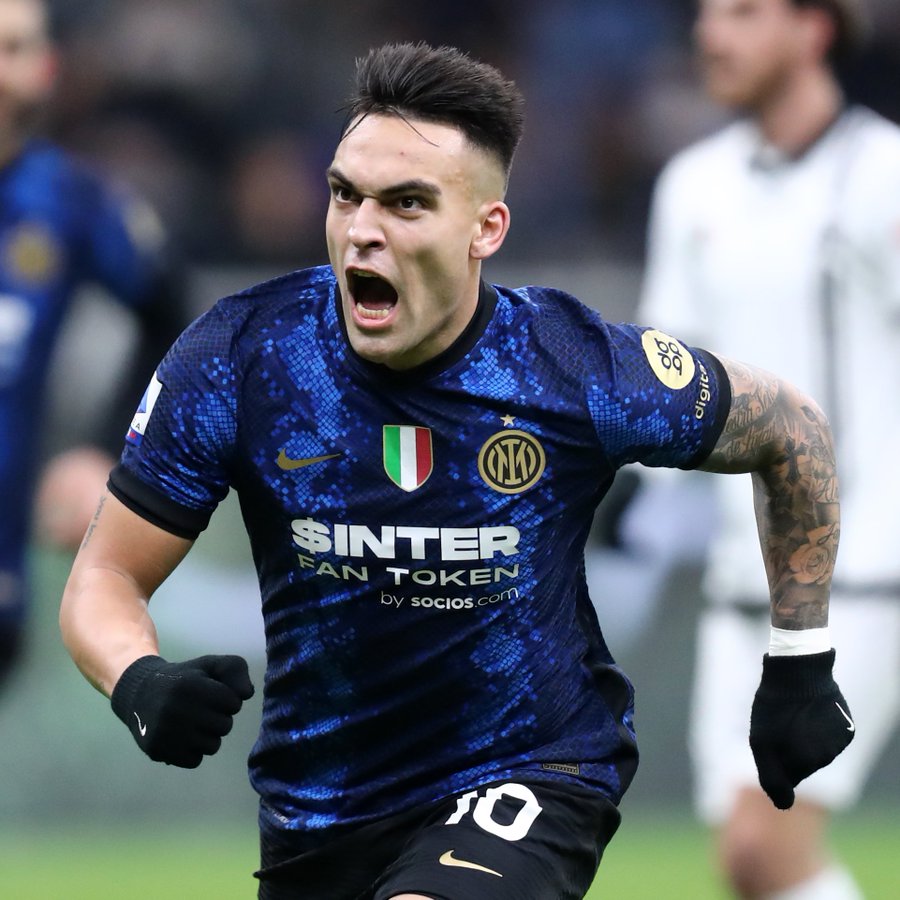 For this match, the historic center forward and killer inside the box, Karim Benzema, will be the player to watch for Real Madrid. No matter how many seasons pass, for the Frenchman there are no limits and he has continued to be one of the most important players for the Spanish team. In the current season, Benzema has 19 starts in which he has scored 17 times, assisted 12 times and played 1,648 minutes with the white shirt, so Karim Benzema could tip the scales in Real Madrid's favor at any time. 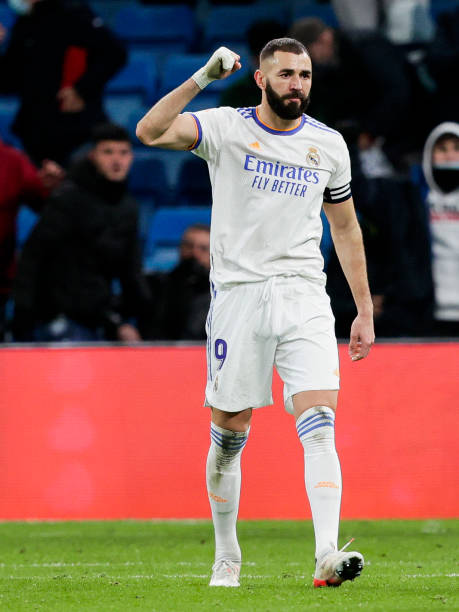 Real Madrid and Inter have met on a total of 18 occasions (7 wins for Inter, 2 draws and 9 wins for Real Madrid), where the balance is slightly in favor of the team from the Spanish capital. Likewise, in terms of goals, it is Real Madrid who have the advantage with 26 goals scored to 21 for the Italians. Their last meeting dates back to the first matchday of the UEFA Champions League group stage, with Madrid winning by the slightest of margins.
2:47 PM8 months ago

For this match, Craig Pawson will be the central referee, he will be accompanied by Ian Hussin and Scott Ledger as the assistants 1 and 2 respectively, finally, Michael Salisbury will serve as the fourth referee. In the VAR, referees Michael Oliver and Dan Cook will be in charge of monitoring any dubious play inside the box or that merits a red card.
2:42 PM8 months ago

Snatching the lead from Madrid

The Inter team is looking to continue to give something to talk about so far in the UEFA Champions League, at the moment they remain as sub leaders of Group D behind Real Madrid, which is their goal for this matchday. The team from the city of Milan has obtained 10 points so far in the competition, which have been the result of 3 wins, a draw and a defeat. Last Champions League matchday they defeated Shakhtar at home to secure a place in the round of 16 of the competition, likewise, in the Italian championship they are second with 37 points and are one point behind the leader of the competition, Milan, for this match, the current champions of Italy will seek to snatch the lead from the giant of Europe and position themselves at the top of their group.
2:37 PM8 months ago

To ensure the leadership of the Group 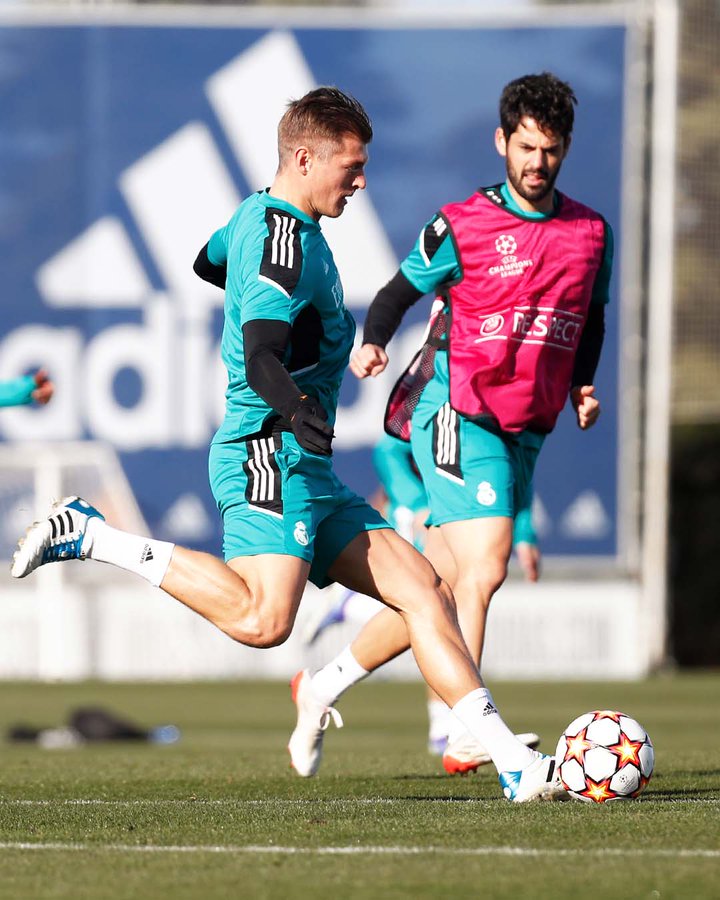 The road to St. Petersburg continues

All great moments began in a dream and there are few lucky ones who can boast in their lives that they once held the Orejona in their arms and were named "kings of Europe". The dream resumes for 32 teams seeking to engrave their name in eternal glory, but to do so, they will have to overcome a long road full of obstacles to reach the main event, St. Petersburg, and have the honor of being crowned as the new champions of the old continent. In Group "D", Real Madrid receives Inter Milan in what will be the last day of the group stage, both clubs have already qualified for the round of 16 and this match will only decide the leadership of the group, at the moment the white house has 12 points and the Italians 10, so everything will be decided in this match.
2:27 PM8 months ago

The Real Madrid vs Inter match will be played at The Santiago Bernabeu Stadium, in Madrid, Spain. The kick-off is scheduled at 15:00 pm ET.
2:22 PM8 months ago