Thank you for listening to this Europa League match. Have a good night and see you next time!
4:59 PMa year ago

With these results Leverkusen finished first in the group with 13 points, followed by Betis with 10. Third were Celtic with nine and Ferencváros closed the group with three points.
4:55 PMa year ago

With a goal by Laidouni, Ferencváros beat Leverkusen and takes the three "honorable" points home!
4:54 PMa year ago

Yellow for Cabraja, for a tackle on Frimpong on the right. The foul was taken in a rehearsed play and the defense took it away, leaving Ferencváros on the counter-attack.
4:51 PMa year ago

Yellow for Blazic, for a foul on the left near the penalty area, which was taken away by the defense. In the corner Tah managed to get the header, but in the hands of Dibusz.
4:48 PMa year ago

Kossounou is yellow carded for bringing down Mmaee on the edge of the box. Before the free-kick, Zubkov left and Cabraja came on for Ferencváros. Uzuni sent a free-kick over the goal.
4:45 PMa year ago

Laidouni is yellow carded for a tackle on Andrich. At the free-kick taken in the area Tah headed out, without danger.
4:43 PMa year ago

Zubkov's cross at the far post was met with a strong header from Laidouni, which Lunev headed into the right corner. The score is open!
4:41 PMa year ago

Substitution in both teams. Leverkusen replaced Alario with Adli. In Ferencváros left Loncar and entered Vecsei.
4:40 PMa year ago

Paulinho received inside the area, turned and found Amiri, but he beat the goalkeeper and the defense took it away!
4:34 PMa year ago

Zubkov hit a strong front free-kick and sent it over the goal, but without danger to Lunev.
4:31 PMa year ago

Leverkusen change: Aránguiz and Ballarabi are out, Diaby and Frimpong are in.
4:29 PMa year ago

Paulinho took off down the left, crossed to Amiri, who received and beat the goalkeeper, who saved and saw Kovacevic pull it away!
4:24 PMa year ago

Alario took a long shot and sent it over the goal, without danger.
4:23 PMa year ago

Leverkusen substitution: Palacios out, Andrich in.
4:20 PMa year ago

The ball came to Laidouni, who shot dangerously over the goal!
4:16 PMa year ago

Paulinho played with Amiri, received in front and hit a low shot into the net, but he was offside and the goal was disallowed.
4:07 PMa year ago

Kovacevic hit a hard shot from outside the box and sent it through the right side of the goal, but without danger.
4:05 PMa year ago

Now the second half of the match between Ferencváros and Leverkusen begins!
4:05 PMa year ago

The teams appear on the field to start the second half of the match. And for Leverkusen Tapsoba is out and Tah is in. And in Ferencváros left Nguen and entered Ryan Mmaee.
3:50 PMa year ago

Without goals, but in an intense and fast-paced game, Ferencváros and Leverkusen go on to tie the match!
3:41 PMa year ago

Nguen received the ball inside the area and fell, asking for a penalty, but nothing was awarded and the game continued.
3:28 PMa year ago

Bellarabi managed a good move, but was stopped in his shot. Then he found Retsos on the right, who blasted a low shot past the goalkeeper and into the back of the net. However, Blazic was fouled early in the move and the goal was disallowed, and Bellarabi was yellow carded for the foul.
3:24 PMa year ago

Bellarabi hit a hard shot from outside the box and sent it through the right side of the goal, on a corner kick, taken in the area and taken out by the defense.
3:18 PMa year ago

Amiri received from Bellarabi inside the area and hit hard, in the corner of the goalkeeper, who saved with his foot, like a handball goalkeeper!
3:14 PMa year ago

Retsos crossed in the box, goalkeeper Dibusz sprawled in the middle and Amiri hit it hard, but over the goal!
3:06 PMa year ago

When the defense made a mistake, Nguen got the ball and Lunev came out well, outside the area, to disturb the striker, who advanced the ball too far and sent it for a goal kick.
2:58 PMa year ago

The ball is rolling and the first half of Ferencváros and Leverkusen begins!
2:57 PMa year ago

The players have already left the field to continue their preparation for the match and will be back on the field soon for the ball to roll!
2:40 PMa year ago

The players appear on the field to begin their warm-up work.
2:14 PMa year ago

The Bayer Leverkusen is scheduled for the next match and will be fielded with: 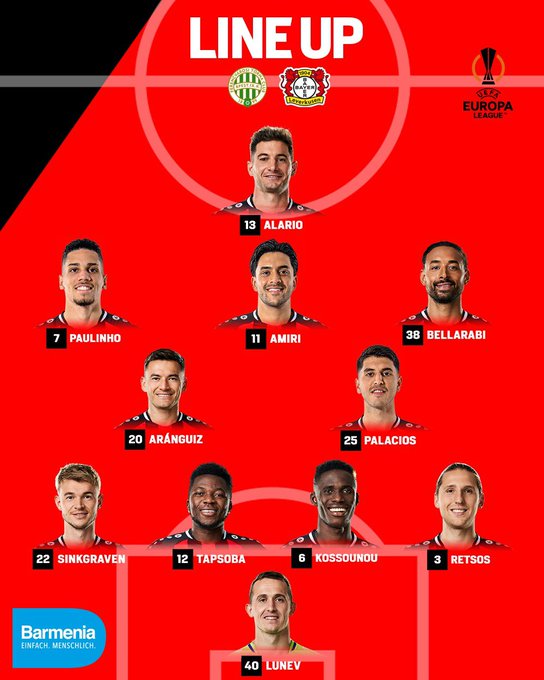 Now begins the broadcast of the match between Ferencváros and Bayer Leverkusen, valid for the sixth round of the Europa League group stage.
1:59 PMa year ago

Do not miss a detail of the match with the live updates and commentaries of VAVEL. Follow along with us all the details, commentaries, analysis and lineups for this Ferencváros vs Bayer Leverkusen match.
1:54 PMa year ago

How to watch Ferencváros vs Bayer LeverkusenLive in TV and Stream

If you want to watch the game Ferencváros vs Bayer Leverkusen live on TV, your options is: none.

If you want to directly stream it: Streaming services and Paramount+, TUDN App, TUDN.com, TUDNxtra app.

What time is Ferencváros vs Bayer Leverkusen match for Europa League?

This is the start time of the game Ferencváros vs Bayer Leverkusen of 8th December 2021 in several countries:

With the entire refereeing team coming from Russia, Kirill Levnikov will referee the match, with assistants Egor Bolkhovitin and Andrei Vereteshkin. Vitali Meshkov will be in charge of VAR.
1:39 PMa year ago

For Ferencváros the only absentee for the match is David Siger with a ligament injury. As for Leverkusen, Bakker, Baumgartlinger and Fosu-Mensah are still out.
1:24 PMa year ago

In group G Leverkusen leads with 13 points, followed closely by Betis with 10 points. In third are Celtic, with six and, at the bottom, Ferencváros, with no points.
1:19 PMa year ago

Leverkusen, on the other hand, come after two wins in their last matches. On Sunday (28), Leverkusen visited Leipzig and won 3-1, with goals from Wirtz, Diaby and Frimpong, while André Silva pulled one back. After that, last Saturday, Leverkusen played against Greuther Furth and (trigger alert) won 7-1, with goals from Schick (4), Hincapié, Tapsoba and Adli, while Dudziak deducted.
1:14 PMa year ago

Ferencváros comes into the match after a draw and a win in the last two matches. On Sunday (28), the victory was over Mezokovesd, 3-0, with goals from Mmaee, Nguen and Boli. The tie came last Saturday (4), against Puskás Akademia, 1-1, when Laidouni opened the scoring and Baluta equalized.
1:09 PMa year ago