Thank you for following this final on VAVEL USA. Until the next time!
11:23 PMa month ago 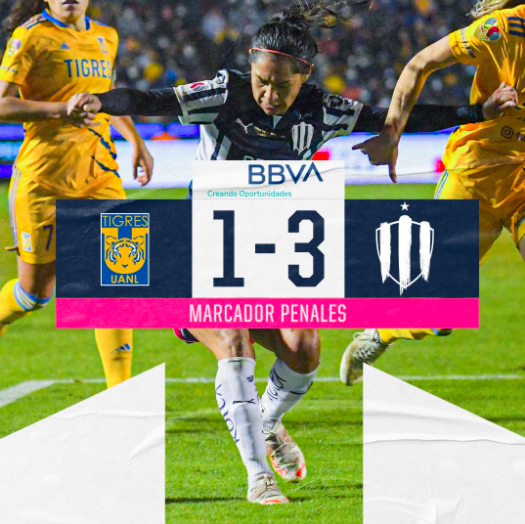 Tigres will open the penalty shootout.
11:07 PMa month ago

Regular time ends! There will be penalty kicks at the Universitario Stadium
11:01 PMa month ago

The referee adds five more minutes to the match.
10:59 PMa month ago

The medical assistants came in to attend to Rebeca Bernal, who had a hard collision with María Sánchez.
10:53 PMa month ago

THE FIRST ONE IS CLOSE! A shot-cross that went close and passed very close to Ceci Santiago's goal.
10:48 PMa month ago

GODINEZ'S SAVE! Elizondo entered the area alone, but Alejandría came out to save and prevent Tigres' goal.
10:45 PMa month ago

MARIA AGAIN! A low cross into the area where Sanchez gets in a first-time shot, but the striped defense blocks well.
10:34 PMa month ago

RAYADAS ARE SAVED! Maria Sanchez looked for the far post with a shot outside the area, but the ball went just wide of the left post.
10:29 PMa month ago

In the first minutes of the second half, Tigres was more dangerous up front.
10:25 PMa month ago

Rayadas: Yamilé Franco is out and Monserrat Rodríguez is in.
10:19 PMa month ago

Strong collision between Katty Martínez and Alejandría Godínez who came out to cut a dangerous play.
10:16 PMa month ago

The second half starts!
9:53 PMa month ago

The first half ends. Tigres Femenil 0-0 Rayadas.
9:53 PMa month ago

MONSIVÁIS MISSES! A great play by Evangelista, who assisted Monsiváis, who was one-on-one with Cecilia Santiago, shot and the goalkeeper saved her goal with a great save.
9:51 PMa month ago

Ovalle had a great individual play on the left and sent in a cross. On the shot, the Rayadas goalkeeper saves well and Monterrey is saved.
9:41 PMa month ago

A cross into the area looked for Monsiváis, but the Tigres goalkeeper bravely came out to cut out the dangerous cross.
9:39 PMa month ago

ALMOST AN AUTOGOAL! Ovalle's cross is deflected by Cadena, but his shot hits the post and Rayadas are saved.
9:34 PMa month ago

A direct shot by Maria Sanchez after a free kick from a free kick where Sanchez kicked at the goal, however, in a series of rebounds in the area, Monsivais came across and deflected it for a corner kick.
9:30 PMa month ago

Desirée Monsiváis was left in front of the Tigres goal, but is flagged offside and misses the goal.
9:24 PMa month ago

First fifteen minutes of the match in which both teams have had few chances at the opponent's goal. Rayadas look slightly better.
9:23 PMa month ago

Individual play by Tigres down the right flank to María Sánchez, who takes a shot at goal that passes close to the crossbar.
9:17 PMa month ago

Diana Evangelista had a long-range shot, but the ball went wide of Tigres' goal.
9:11 PMa month ago

Rayadas' first attack on the right, but the Tigres goalkeeper was very attentive and made a good save.
9:08 PMa month ago

The match has started!
9:01 PMa month ago

The protocol for the grand finale begins with the singing of the Mexican national anthem.
8:59 PMa month ago

The fans of both teams are already present at the Stadium Universitario to witness the second leg of the final between Tigres and Rayadas. 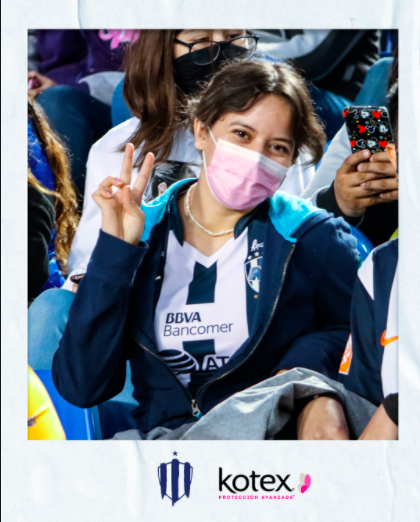 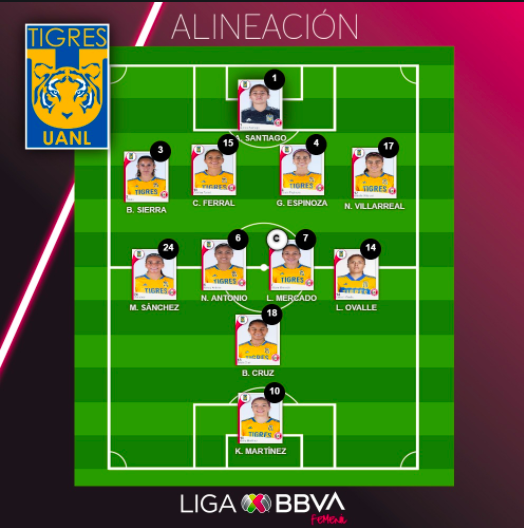 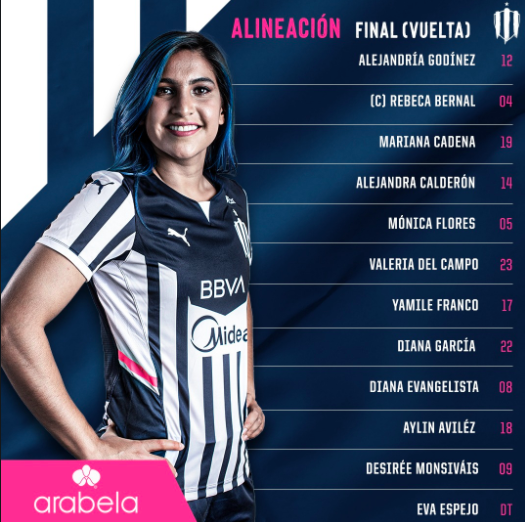 The dressing room of the Estadio Universitario is ready with the uniforms of tonight's protagonists. The home team will be in their yellow uniform with blue details, while the visitors will be in their traditional striped blue and white. 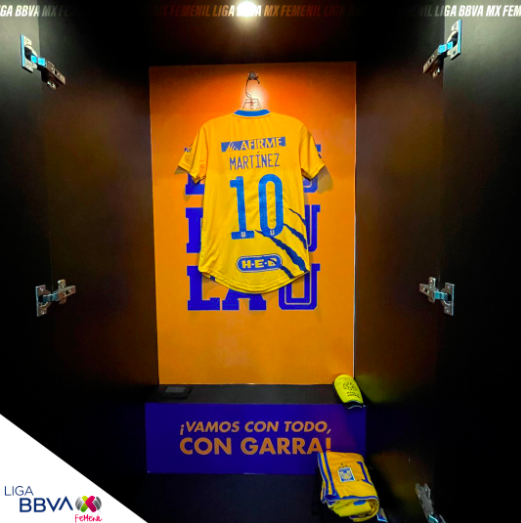 On the home team's side, Stephany Mayor will be the main absentee for Tigres Femenil due to her suspension; however, they have Katty Martínez, one of the team's goal scorers, back.

On the Rayadas' side, Christina Burkenroad, an attacker who came on as a substitute in the first leg, suffered a grade 2 cervical sprain and is therefore not considered for today's game.

With the respective hygiene measures in place, both teams arrived at the Estadio Universitario to play the second leg of the Liga MX Femenil final. 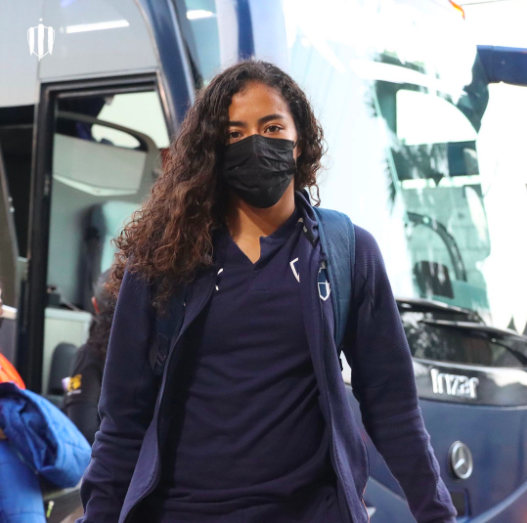 Tigres Femenil striker, Stephany Mayor, will miss the second leg of the Liga MX Femenil final, after being sanctioned by the Disciplinary Commission with two matches and a financial fine. This was the result of an investigation by the Disciplinary Commission into a blow that Stephany Mayor delivered to Diana García in the first leg, without the ball being in play.
8:14 PMa month ago

The Clasico Regio Femenil has played 24 official matches (including the first leg of the final), with ten wins, nine draws and five wins for Rayadas. This is the fifth occasion on which there has been a final in the regia. Tigres has lifted the cup on three occasions against Rayadas, while Monterrey has done so on only one occasion.
8:10 PMa month ago

The University Stadium is the home of Tigres' men's and women's teams. This stadium, also known as El Volcán, is a soccer stadium located on the campus of the Universidad Autónoma de Nuevo León, in San Nicolás de los Garza. It has a capacity to hold a little over 42 thousand spectators and will once again host a Liga MX Women's final, the sixth in its history. 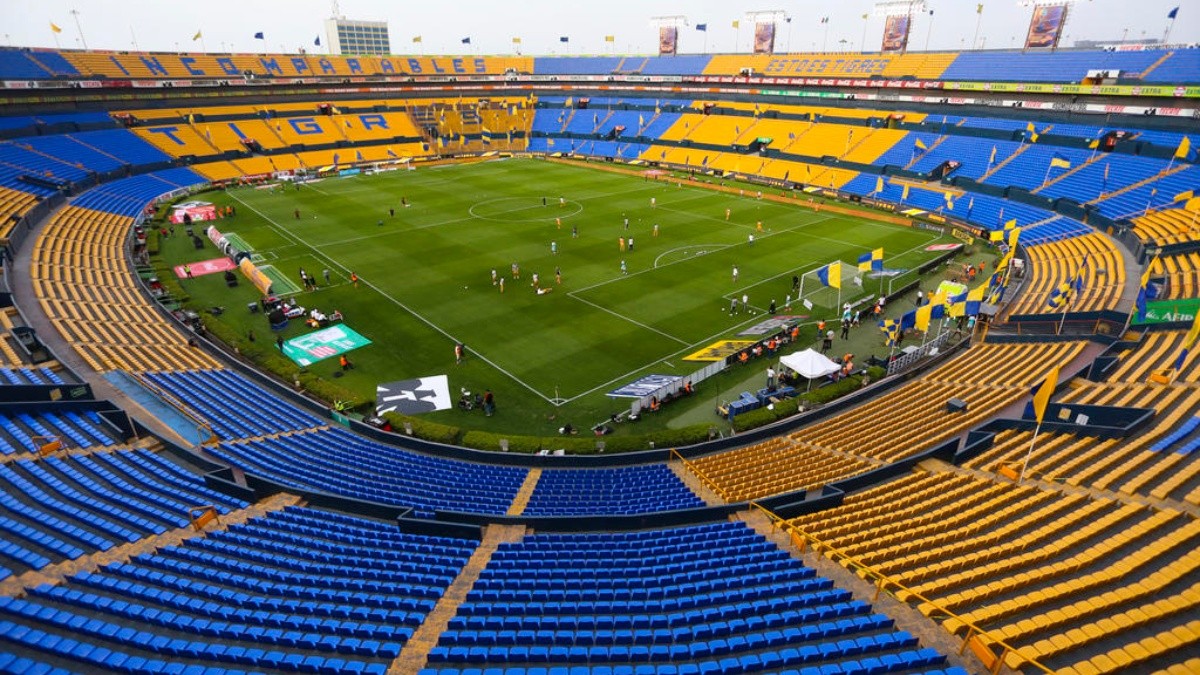 We are just under an hour away from the start of the Liga MX Femenil final at the Universitario Stadium. Once again, this final will be played in Nuevo Leon, and Tigres will be looking for glory with a three-time championship, while Rayadas wants to win their second star by being crowned in another stadium and against their fierce rivals. Who will manage to lift the cup? Follow our coverage on VAVEL USA.
10:35 PMa month ago

Do not miss a detail of the match with the live updates and commentaries of VAVEL. Follow along with us all the details, commentaries, analysis and lineups for this Tigres Femenil vs Rayadas match.
10:30 PMa month ago

How to watch Tigres Femenil - Rayadas Live Stream on TV and Online?

If you want to watch the game Tigres Femenil - Rayadas live on TV, your options is: TUDN USA

Desiree Monsiváis: The star striker and historic striker of the Rayadas was in the fight for the scoring championship and came in behind only Cuellar and Cervantes. Monsiváis is her club's all-time leading scorer and is undoubtedly one of the most dangerous strikers in Liga MX Femenil. 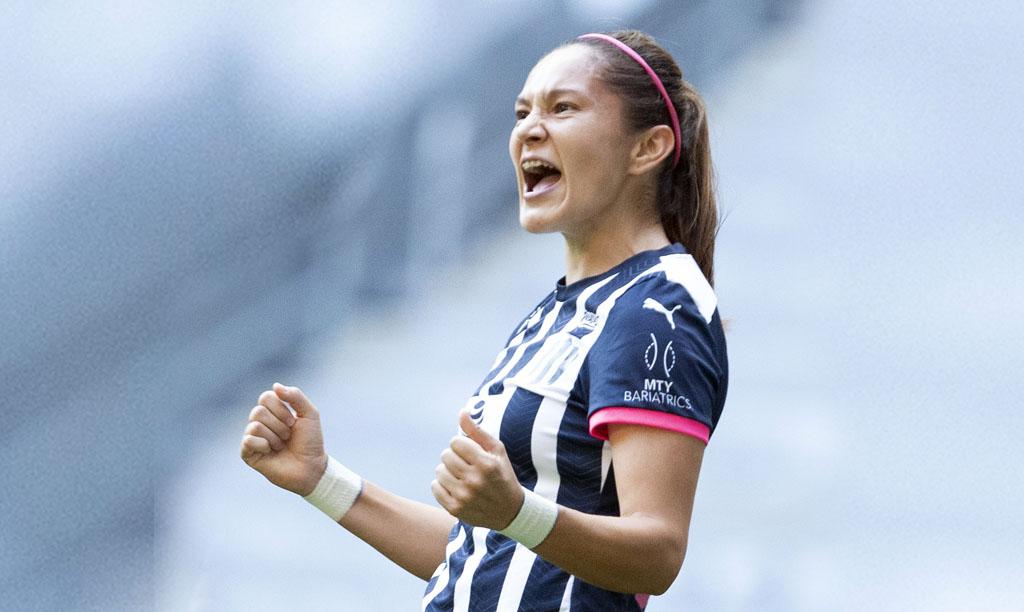 Katty Martínez: The Mexican striker is one of her team's top scorers and has returned from injury to play in this final. She finished the regular phase with 13 goals and after the absence of Stephany Mayor, she will have to be the leader of the feline offense. She is one of the players who contributes the most to the Amazons' front line. 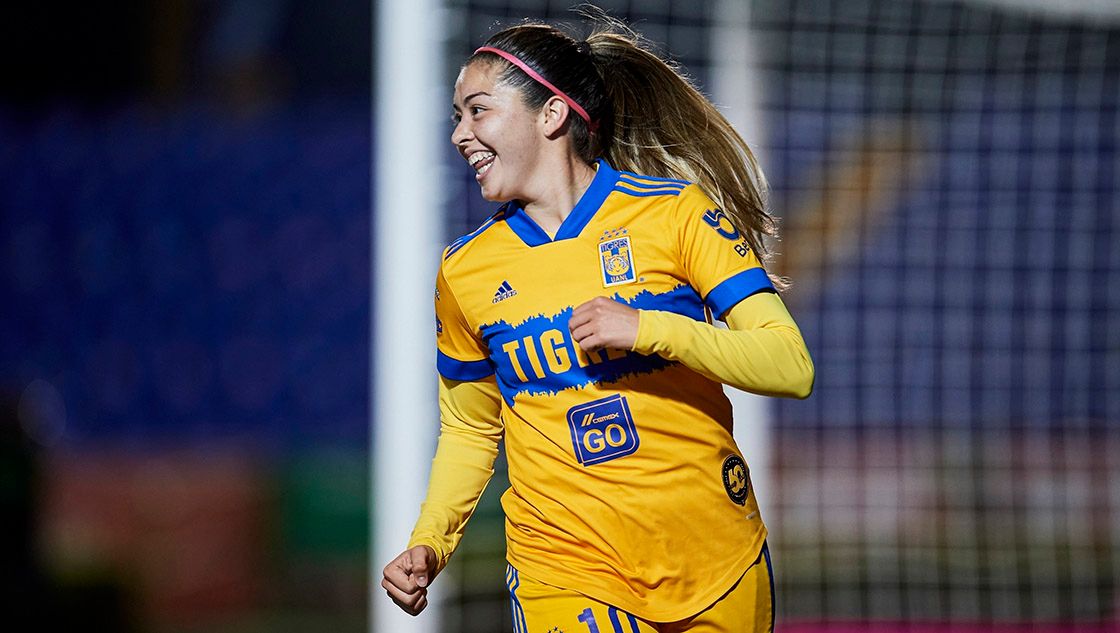 Rayadas: For their second star

The Rayadas, led by Eva Espejo, finished as runner-up in the competition with 44 points after 14 wins, two ties and one loss, and will once again face their fierce rival, a team that has won the championship four times. That is why the Rayadas see this final as a revenge to win their second league championship. In the first leg, they were unable to take advantage of their home advantage and after leading 2-1 with an own goal, Stephany Mayor scored the equalizer at 70'. 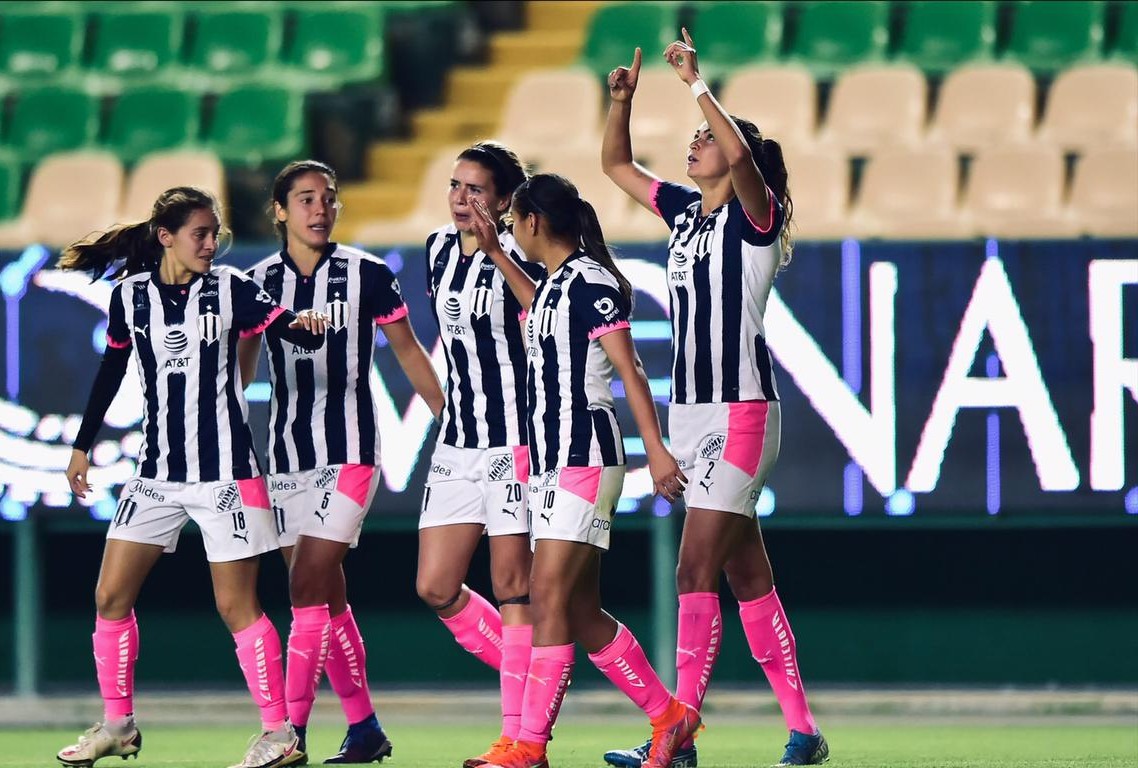 The university team, led by Roberto Medina, finished as the leader of the competition with 47 points and are the only undefeated team in the competition after 15 wins and two ties, and are undoubtedly the favorite team to win the championship this tournament. Tigres Femenil is undefeated and has the advantage of closing at home; however, the task is complicated as they face the second best team in the competition according to the numbers.  So if Tigres wants to achieve what no one has achieved so far (the three-time championship), they will have to play a match with as few mistakes as possible. 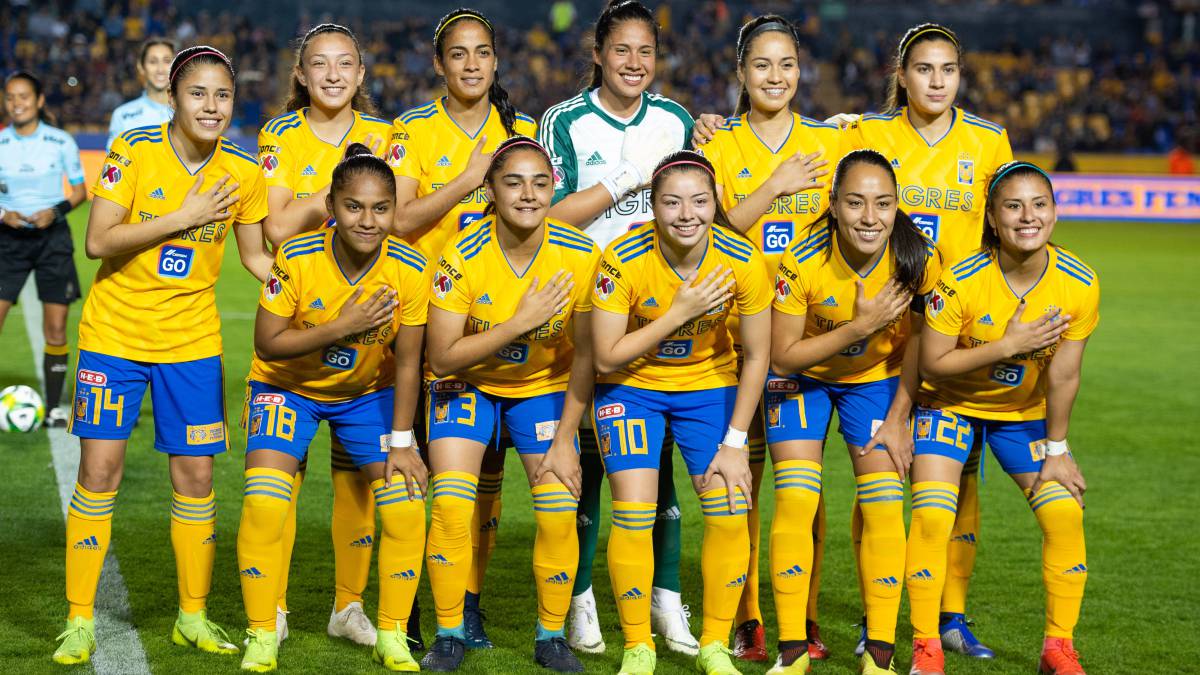 The match will be played at the Stadium Universitario

The Tigres Femenil vs Rayadas match will be played at the Universitario Stadium, in Monterrey, Mexico. The kick-off is scheduled at 9 pm ET.
9:45 PMa month ago

Tonight, the second leg of the semifinal will be played between two teams that are quite consistent and have already faced each other at this stage. After the aggregate draw, Tigres and Rayadas will come to play for everything. In the first leg, the teams from Monterrey ended in a two-goal draw, so tonight they will be playing at their best to be crowned champions of the Grita México A21 tournament of the Liga MX Femenil.
9:40 PMa month ago