Thank you for listening to this Premier League match. Stay tuned here for the repercussions of this game. Have a nice day, happy new year, and see you next time!
10:32 AM5 months ago

Arsenal return to the field on Thursday (6), when they face Liverpool in the English League Cup semifinal. City, on the other hand, play against Swindon Town on Friday (7) in the FA Cup.

City come back from a goal down to beat Arsenal away from home in a great game!
10:24 AM5 months ago

Laporte tried to deflect a cross into the box and the ball fell to Rodri, who managed to finish almost in the small area and sent the ball into the back of the net, turning the match - and getting yellow for celebrating by taking off his shirt!
10:21 AM5 months ago

We will have six more minutes of extra time in the match.
10:13 AM5 months ago

Arsenal substitution: Saka is out, Elneny is in.
10:09 AM5 months ago

Cancelo received on the edge of the area and shot hard, but over the goal.
10:01 AM5 months ago

Arsenal substitution: Lacazette out, Smith Rowe in.
9:53 AM5 months ago

And he painted a yellow for Saka for complaining after a foul by Rodri on Lacazette.
9:52 AM5 months ago

Substitution in both teams. At City Gabriel Jesus left and Gundogan came in. And at Arsenal Oodegard left and entered Holding.
9:50 AM5 months ago

And in the goal kick right after Laporte's mistake, Gabriel Jesus received, killed on the chest and was hit by Gabriel Magalhães, who got a yellow card. But he already had one, because he complained a lot on the penalty kick! Gabriel Magalhães is sent off!
9:48 AM5 months ago

On the next penalty kick the ball was lifted into the box, Laporte deflected it over the goalkeeper and was about to send it against his own goal, but Aké saved it on the line. In the rebound Martinelli isolated!
9:46 AM5 months ago

Mahrez went for the ball and sent it into the left corner, high, with no chance for Ramsdale, who came out to the right. The game is tied!
9:45 AM5 months ago

Xhaka pulled Bernardo Silva inside the area, the referee went to VAR and gave the maximum penalty to Manchester City!
9:35 AM5 months ago

Lacazette gets his first touch on the ball and it rolls into the second half of the match!
9:34 AM5 months ago

The players from Arsenal and Manchester City return to the pitch to start the second half of the match.
9:20 AM5 months ago

With Saka's goal in an eventful 45 minutes, Arsenal go on to beat City at home in the Premier League!
9:15 AM5 months ago

Gabriel Martinelli stole the ball in the backfield, carried it, passed two people and got the shot, already inside the area, but sent it dangerously to the left side!
9:11 AM5 months ago

Martinelli took it from the left to the middle and hit it hard from outside the area, but sent it out of the left side of the goal!
9:04 AM5 months ago

Martinelli found Tierney, who received on the left, charged and played in the middle, where Saka was, who hit hard and first time, in the left corner, with no chance to Ederson on the floor. The score is open!
9:00 AM5 months ago

Arsenal launches itself into the attack and keeps possession, trying to open the score - proof of this: it is 75% possession for the Gunners in the last 10 minutes.
8:51 AM5 months ago

Gabriel Jesus got the pass inside the box to De Bruyne, who hit a cross and sent it to the left side of the goal!
8:49 AM5 months ago

Martinelli received Partey's pass on the left and managed to get a strong shot, but over the goalkeeper Ederson!
8:46 AM5 months ago

Sterling managed to get a cross in the box and Ruben Dias went for the header and managed to deflect the ball before the goalkeeper, sending it to the right side of the goal!
8:37 AM5 months ago

From a cross in the box Gabriel Jesus got the header and sent the ball into the right side of the goal!
8:32 AM5 months ago

And before the ball starts to roll, the players kneel in protest against racism. And now Mahrez gets his first touch on the ball and it rolls into the first half on the first day of 2022!
8:29 AM5 months ago

The players take to the field to start the match!
8:16 AM5 months ago

The players leave the field to continue their preparation and soon return to the field for the ball to roll!
8:07 AM5 months ago

Tomorrow, Brentford face Aston Villa, Leeds face Burnley, Everton face Brighton and Chelsea play the other derby of the round against Liverpool. And on Monday, Manchester United face Wolverhampton.
8:07 AM5 months ago

This game you are watching now is the only one in the round, followed by, later today, Watford and Tottenham, as well as Crystal Palace and West Ham.

And before we talk about the games of the round, we remind you that there are many cases of Covid-19 among PL players, so many games have been postponed and some may still be postponed.
7:59 AM5 months ago

The players appear on the field to begin their warm-up work.
7:47 AM5 months ago

Manchester City is lined up and comes to the match with: 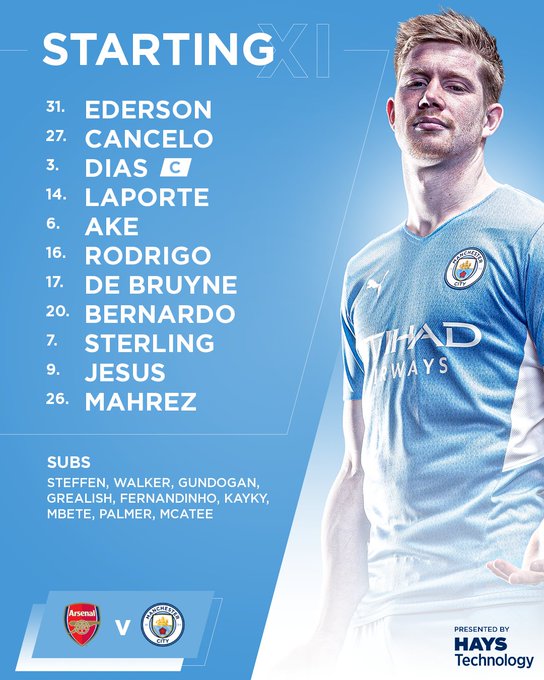 Arsenal is lined up and comes to the match with: 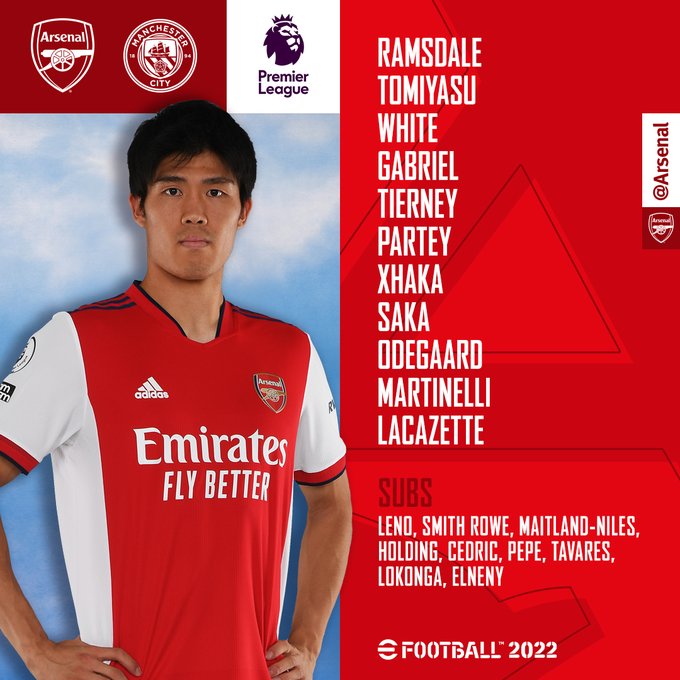 Happy New Year! Now begins the broadcast of the match between Arsenal and Manchester City, valid for the Premier League!

Do not miss a detail of the match with the live updates and commentaries of VAVEL. Follow along with us all the details, commentaries, analysis and lineups for this Arsenal vs Manchester City match.
7:27 AM5 months ago

If you want to watch the game Arsenal vs Manchester City live on TV, your options is: NBC Sports.

What time is Arsenal vs Manchester City match for Premier League?

This is the start time of the game Arsenal vs Manchester City of 1st January 2022 in several countries:

Last season City hosted Arsenal and scored 5-0 at home, with goals from Gundogan, Ferran Torres (2), Gabriel Jesus and Rodri.
7:12 AM5 months ago

Stuart Attwell will referee the match, with assistants Constantine Hatzidakis and Simon Long. Jarred Gillet will be in charge of VAR.
7:07 AM5 months ago

The probable Manchester City team for the confrontation is: Ederson, João Cancelo, Ruben Dias, Laporte and Aké; Bernardo Silva, Gundogan and De Bruyne; Mahrez, Foden and Sterling.
7:02 AM5 months ago

With this the possible Arsenal team for the match is: Ramsdale, White, Holding, Gabriel Magalhaes and Tierney; Chaka, Partey, Saka, Oodegard and Smith Rowe; Lacazette.
6:57 AM5 months ago

Arteta will have problems starting his team for the derby. Besides Kolasinac, injured, Chambers, Tomiyasu, Cedric and Maitland-Niles tested positive for Covid-19 and are out. Pep Guardiola will not have Walker, Rodri and Stones, both injured.
6:52 AM5 months ago

Manchester City leads the Premier League and is on course to increase the gap after some stumbles in past rounds of rivals, adding 50 points, eight ahead of Chelsea, second and nine ahead of Liverpool. Closing the G-4 are Arsenal, who have 35 points, followed "more or less" closely by West Ham and Manchester United, both with 31 points, closing the G-6.
6:47 AM5 months ago

Meanwhile Manchester City played two Premier League games, winning the first, on Sunday (26), 6-3 against Leicester. The scorers of this crazy score were De Bruyne, Mahrez, Gundogan, Sterling (2) and Laporte for the citizens, while Maddison, Lookman and Iheanacho scored for the foxes. And away from home, last Wednesday (29), City visited Brentford and won 1-0, with Foden's goal.
6:42 AM5 months ago

Arsenal arrive for the match in good shape, without knowing what it is to be defeated in five games, and in the last two Arsenal scored 10 goals and conceded only one. Against Sunderland, the result was 5-1, with Broadhead scoring for the visitors in the League Cup game, while Nketiah (3), Pépé, and Patino scored for the Gunners. After that Arsenal beat Norwich 5-0 last Sunday (26), with goals from Saka (2), Tierney, Lacazette and Smith-Rowe, in the Premier League.
6:37 AM5 months ago