At the end of the match, Sevilla, without playing an excellent game, won the match and is now 5 points behind the leader Real Madrid with a game in hand.
5:05 PM25 days ago

Four more minutes are played at the Nuevo Mirandilla stadium.
5:03 PM25 days ago

Corner kick in favor of Sevilla to which Lucas Ocampos arrives to score the second goal, but at the moment of the last pass the Argentine player was in an advanced position.
5:00 PM25 days ago

The end of the game is approaching and for now the visiting team is taking advantage of a great opportunity to take points off Real Madrid.
4:59 PM25 days ago

Ivan Rakitić's great shot was on target, but goalkeeper Jeremías Ledesma denied him the second goal for Sevilla.
4:56 PM25 days ago

In the last few minutes Cádiz has pressured Sevilla at the start and dreams of a move that will give them an equalizer in the final minutes.
4:52 PM25 days ago

In the last few minutes Cádiz has pressured Sevilla at the start and dreams of a move that will give them an equalizer in the final minutes.
4:51 PM25 days ago

Cádiz has a great opportunity from a corner kick to try to level the score.
4:47 PM25 days ago

In the last few minutes, the goalkeepers did not have much work to do and the ball was played more in the middle of the field.
4:44 PM25 days ago

Very dangerous free kick in favor of Sevilla to try to increase the lead.
4:42 PM25 days ago

The intensity of the game drops in the last few minutes thanks to the comfort with which Sevilla are playing.
4:39 PM25 days ago

After the goal, Sevilla had more options to increase the lead and began to manage the scoreboard calmly.
4:37 PM25 days ago

The Cadiz team cannot react after the goal they conceded and the wear and tear they have made prevents them from creating dangerous options.
4:34 PM25 days ago

The match is stopped because the player Iván Chapela is on the floor and cannot continue the match.
4:32 PM25 days ago

Sevilla had been threatening Cádiz with a dead ball and Lucas Ocampos took advantage of a rebound from a corner kick to put the visiting team on top.
4:30 PM25 days ago

Sevilla are finding it difficult to breach the goal of Cadiz and they are unable to have a clear option that would give them the opportunity to take more points away from Real Madrid.
4:27 PM25 days ago

Dangerous free kick in favor of the visitors that almost ends up inside the goal.
4:27 PM25 days ago

Sevilla came out all guns blazing at the start to break the deadlock on the scoreboard.
4:25 PM25 days ago

The second half begins and the score of this match will be defined.
4:04 PM25 days ago

The first half ends, in a match where no differences have been made and which has presented few scoring options.
Cádiz and Sevilla tied 0-0 at the end of the first 45 minutes.
4:00 PM25 days ago

The end of the first half is approaching and the teams want to go to the break for a technical talk to help them find solutions to this match.
3:57 PM25 days ago

Teams are not getting going in the last minutes of the first half and the coaches are not happy with what they see.
3:53 PM25 days ago

Another corner kick in favor of Sevilla that could give them the chance to go to the break with an advantage on the scoreboard.
3:51 PM25 days ago

In the last minutes the goalkeepers have worked less, Sevilla has tried, but lacks clarity in the last quarter of the field.
3:48 PM25 days ago

We reached the half-hour mark, more was expected from the match, but there were no great scoring options in the goals.
3:44 PM25 days ago

Corner kick in favor of the visiting team.
3:40 PM25 days ago

In the last minutes, the intensity of the game continues to drop and the game is no longer as attractive as it started.
3:34 PM25 days ago

In the last minutes, Cadiz has been more lively in attack and has been dangerous to Bono's goal.
Lack of clarity to open the score.
3:32 PM25 days ago

Corner kick in favor of Cádiz, which wants to take advantage of it to start exercising its home advantage.
3:30 PM25 days ago

The match is not yet set up and both teams try to keep the ball in the midfield.
3:28 PM25 days ago

A shot by Alejandro Darío Gómez, player of Sevilla, but the ball goes wide of the goal defended by Jeremías Ledesma.
3:25 PM25 days ago

A cross was delivered to Álvaro Negredo, a Cádiz player, but the shot did not go in and the score remained goalless.
3:24 PM25 days ago

The intensity of the game dropped in the last few minutes, although Sevilla had the ball, but lacked clarity in front of goal to start getting on the scoreboard.
3:21 PM25 days ago

Foul in favor of the visitor in the middle of the field.
3:20 PM25 days ago

Very early on, Sevilla began to create dangerous options in the opposing goal with a shot by Joan Jordán that passed close to the goal.
3:19 PM25 days ago

The match starts at the Nuevo Mirandilla stadium and it will be known which of the two teams will be able to go home calmly.
3:16 PM25 days ago

The match is about to start

The players are already on the field to close the 19th date of the championship.
3:15 PM25 days ago

The team coached by Álvaro Cervera has only obtained 2 of the last 9 possible points in the championship.
3:01 PM25 days ago

The last match between these two teams with Cadiz playing at home was on September 27, 2020 in LaLiga Santander.
Sevilla won the match with a score of 1-3 with goals from Luuk de Jong, Munir El Haddadi and Ivan Rakitic, the discount was scored by Salvi Sanchez.
2:49 PM25 days ago

The team coached by Julien Lopetegui has 4 absentees due to injury for this match, their names are: Yousef En Nesyri, Erick Lamela, Jesus Navas, Suso.
There is a fifth casualty, but it is due to red card, it is the French Jules Kounde.
2:40 PM25 days ago

The home team has 4 absentees due to injury for this match, they are: Santiago Arzamendia, Juan Cala, Jon Ander Garrido, Alberto Perea.
11:06 PMa month ago

In a few moments we will share with you the starting lineups for the Cadiz vs Sevulla live match, as well as the latest information from the Nuevo Mirandilla stadium. Stay tuned for up-to-the-minute live coverage of the match on VAVEL.
11:01 PMa month ago

How to watch the match Cadiz vs Sevilla?

What time is Cadiz vs Sevilla?

This is the kick-off time for the Cádiz vs Sevilla match on January 3, 2022 in several countries:

The Sevilla team has a great chance to win the match and is the favorite in the match corresponding to the 19th date of the championship.
10:46 PMa month ago

Spaniard Santiago Jaime Latre will be in charge of the match between Cádiz and Sevilla that closes the 19th round of the BBVA League 2021-22.
10:41 PMa month ago

The Sevilla team is in second place in the standings, has scored 29 goals in the championship, but distributes its goals very well among several players, so much so that the first of the team that appears is Rafa Mir with 5 goals, his presence in the team can become very important to cut points to the leader.
10:36 PMa month ago

Honduran player Choco Lozano has become a key player for the team coached by Álvaro Cervera. The team has not scored many goals, but the Central American player has scored the most with 5 of the 15 goals the team has scored so far this season.
10:31 PMa month ago

The visiting team is in the lead in the record of the match against Cádiz, with the following numbers:
10:26 PMa month ago

Sevilla: a great option to take points off Real Madrid

The team led by Julen Lopetegui has become one of the revelations of the championship, is in second place in the championship with 38 points, six behind the leader Real Madrid and with two games in hand.
The team from Seville can become one of the great beneficiaries of the 19th round of LaLiga BBVA if they get a victory, since the leader of the championship (Real Madrid), the third in the standings (Real Betis) and the fourth place in the championship (Rayo Vallecano), obtained defeats, with these results the team led by Julen Lopetegui can not only get closer to the first place, but also move away from their pursuers.
10:21 PMa month ago

Cádiz: a chance to get out of the relegation places

The team led by Álvaro Cervera has not had a good first round in LaLiga 2021-22, is in 19th position out of 20 participating teams, has 14 points in, has scored 15 goals in 18 games and has conceded 31.
The match against Sevilla is the perfect opportunity for Cadiz to climb some positions in the table, get out of the relegation places and try to make a second round to stay in the first division.
10:16 PMa month ago 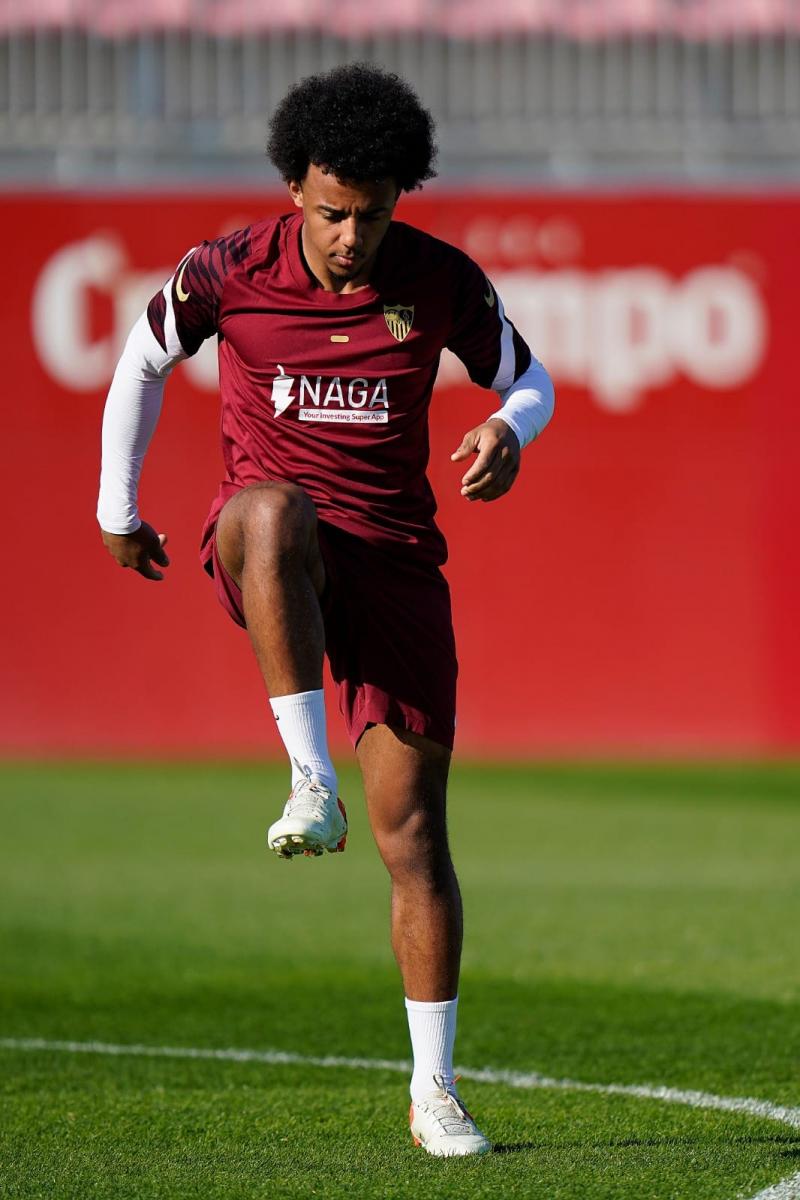 The match will be played at the Nuevo Mirandilla stadium, where the Cadiz team plays its home matches and has a capacity of 25,033 spectators.
10:06 PMa month ago

Hello everyone! Welcome to the broadcast of the match between Cádiz vs Sevilla, corresponding to the 19th date of LaLiga Santander 2021-22.
My name is Daniel Soler and I will be your host for this match. We will provide you with pre-match analysis, score updates and live news here on VAVEL.