We hope you enjoyed watching West Bromwich vs Brighton in Round 3 of the FA Cup. Continue to visit the VAVEL website to keep up to date with all the information that arises throughout the day.
1:35 PM7 months ago

The match ends and the Seagulls, who came back from behind on the scoreboard, win the match to stay alive in the FA Cup.

The second 15 minutes start, West Bromwich will have to go all out in search of a draw, while the Seagulls will be looking to kill the game with another goal in their favor.
1:16 PM7 months ago

The first 15 minutes of extra time are over, the visitors have the advantage at the moment.
1:11 PM7 months ago

GOOOOOOOOOL FOR THE SEAGULLS!!! MAUPAY TURNS THE GAME AROUND AND THE VISITORS ALREADY WIN IT!
1:01 PM7 months ago

The first 15 minutes begin, the game is tied and the Seagulls are more confident going into the match.
12:56 PM7 months ago

At the end of the 90 minutes, both clubs tied 1-1 on the scoreboard and the game will go to overtime; 2 halves of 15 minutes each to try to break the tie. In the event of a tie, penalty kicks will be taken.
12:43 PM7 months ago

GOOOOOOOOOL FOR THE SEAGULLS! GOOOOOOOOOL FOR BRIGHTON! THE MATCH IS TIED! JAKUB MORDER TIES THE SCORE AND IT STINKS OF OVERTIME!
12:39 PM7 months ago

LAST MINUTES OF THE MATCH!
The final stretch begins, it's the last minutes of the match and Albion are still leading by the narrowest of margins. It will be a heart-stopping finale with the Seagulls looking for an equalizer and Albion defending the result tooth and nail.
12:30 PM7 months ago

TO THE SHOWERS! Cédric Kipré goes to the sin bin after committing a harsh foul on Mac Allister, West Bromwich are left at a disadvantage on the pitch.
12:20 PM7 months ago

Trossard's back-heel into the box caused havoc before the ball was eventually volleyed clear by Burn, who volleyed well wide.
12:16 PM7 months ago

This is how Callum Robinson scored the first goal on the scoreboard.

The second half kicks off between West Bromwich and Brighton, with one team looking to be the team that comes out on top for the win.
11:50 AM7 months ago

First half ends at The Hawthorns, West Bromwich and Brighton continue to play to a goalless draw.
11:42 AM7 months ago

Jake Livermore is shown the yellow card in the match after committing a hard foul on Maupay.
11:30 AM7 months ago

Mwepu is dropped through injury for Brighton, and is replaced by Mac Allister, a forced change very early in the game for the visitors.
11:20 AM7 months ago

Mwepu makes a great intervention, but Reachy defends, gets into the box and tries to take a shot that is blocked by the defense.
11:14 AM7 months ago

Matt Phillips tries again from outside the box and the shot has gone over the crossbar, at the moment Albion owns the ball.
11:09 AM7 months ago

Phillips shoots and the ball goes over the three posts. Albion already made the first attacking call.
11:01 AM7 months ago

The match between West Bromwich and Brighton starts, both clubs are looking for the qualification to the next round.
10:46 AM7 months ago

In a couple of minutes we will start with the rebroadcast of West Bromwich vs Brighton; duel corresponding to Round 3 of the FA Cup.
10:42 AM7 months ago

ARE ON A ROLL

The last time Brighton were defeated was on December 15, p2021 when they lost by the minimum to Wolverhampton, since then the Seagulls have managed to win in a row and today they could continue the good streak.
10:40 AM7 months ago

Brighton is doing well in the Premier League. After 19 rounds, the "seagulls" occupy 9th place, earning points 27. The team is unlikely to climb higher, but with such a performance will definitely remain a strong half of the league. Recently, Potter's wards manage to create dangerous moments, and, for example, in an extreme match, the guys scored even three goals - 3-2 with Everton.
10:29 AM7 months ago

West Bromwich is trying to return to the Premier League. After rounds of 25, Blackbirds got points from 42, and this is the fourth line in the Championship. Note that the delay of the direct exit to the elite is only four points. it is true that in recent times, Ishmael's protégé began to suffer disruptions in the offensive game - in three extreme appearances, the guys scored only one ball, however, and lost only two.
10:19 AM7 months ago

THIS IS HOW BROMWICH START

These are the 11 Baggies who will take the field for West Brom as they look to continue making history this season. 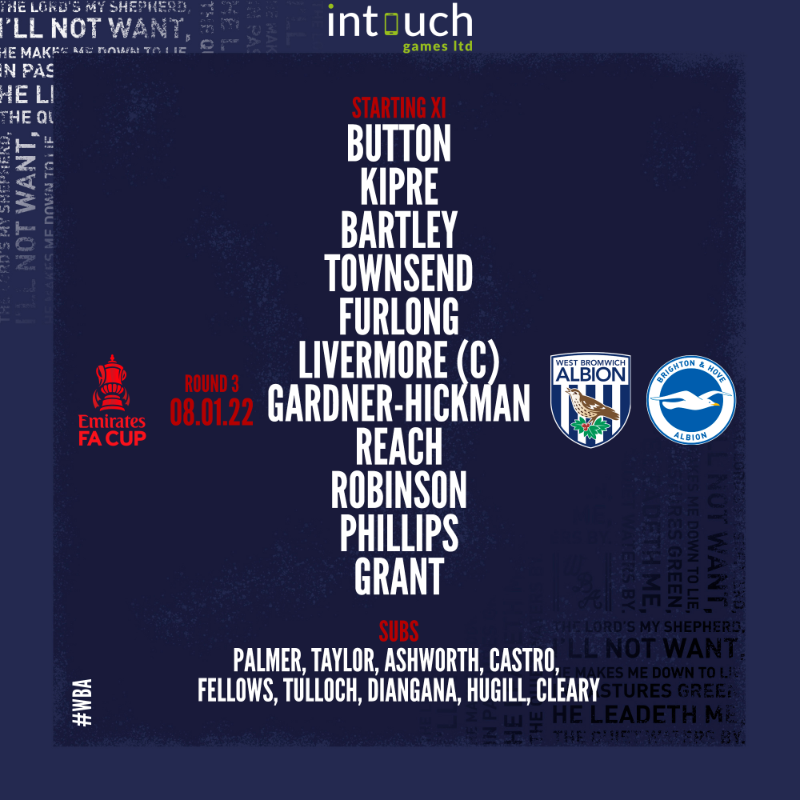 THIS IS HOW BRIGHTON IS GOING OUT

These are the 11 Seagulls who will take the field for Brighton as they look to continue making history this season. 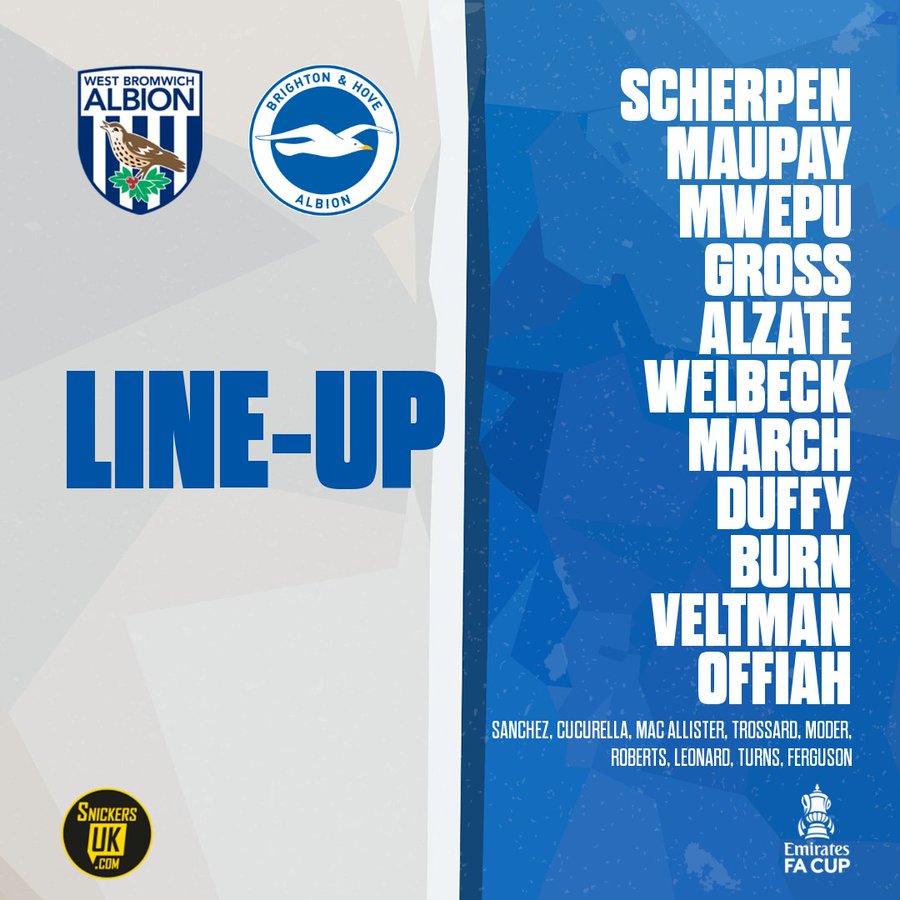 Last year, the teams met once. The clash took place in February in the framework of the Premier League and ended with victory West Bromwich with a minimum Score of 1-0. There is a positive balance of goals every time these two meet as in the last six duels there is an average of 2.5 goals per game.
10:00 AM7 months ago

The wait is over and the action begins in the glorious FA Cup where all participants dream of writing their name in history and play the desired final at Wembley. For this duel, West Bromwich will be looking to give a goal on the table and prove that the Championship can give battle to the Premier League when they host Brighton, a team from the maximum circuit that will be looking to secure their pass to the next round as visitors.
2:35 PM7 months ago

Do not miss a detail of the match with the live updates and commentaries of VAVEL. Follow along with us all the details, commentaries, analysis and lineups for this West Bromwich vs Brighton match.
2:30 PM7 months ago

What time is West Bromwich vs Brighton match for FA Cup?

This is the start time of the game West Bromwich vs Brighton of 8th January in several countries:

Watch out for this Brighton player:

Selected by the Red Fury and a very important piece in the Seagulls team, Marc Cucurella has come from less to more since his arrival at the English club, likewise, he has played 1,292 minutes so far this season which are distributed in 15 games played, 1 assist and 3 yellow cards, despite not having added goals at the moment, Cucurella is a great creative element within the field that is able to create plays, distribute the ball on the field and penetrate the defensive lines of the rival so the Spaniard; Marc Cucurella will be the player to watch for this match.

Watch out for this West Bromwich player:

Callum Robinson is one of the mainstays the Baggies possess in the Championship and has been a factor in several matches for the team to be in with a chance of returning to the Premier League after last season's failure, at the moment, Robinson totals 1,340 minutes played which is spread over 22 games played, 4 goals, 6 assists and 1 yellow card. Callum Robinson is capable of changing the pace of a game at any time so he will be the player to watch for this match.

Baggies and Seagulls have met a total of 24 times (9 wins for West Bromwich, 10 draws and 5 wins for Brighton) with the scales tipping slightly in favor of the home side. In terms of goals, the Baggies have the advantage with 28 goals, while Brighton have 19 goals. Their last meeting dates back to matchday 26 of the 2020-21 season where West Bromwich won by the minimum against the Seagulls.
2:00 PM7 months ago

The Hawthorns is a soccer stadium with a capacity of 26,287 spectators, located in West Bromwich, England. It has been owned by West Bromwich Albion since 1900 and became the sixth stadium used by the club. The ground was (there are divergent opinions) the first Football League soccer stadium to be built between the late 19th and early 20th centuries. With a height above sea level of 168 meters it is the highest of the 92 stadiums of the Premier League and Football League clubs.
1:55 PM7 months ago

The mission: To keep on winning

For their part, Brighton Seagulls will be looking to win away and show why they are competing in the Premier League and still have a good chance of getting into the European places. Brighton Seagulls are currently in 10th place in the overall standings with a total of 24 points from 5 wins, 9 draws and 4 defeats, 9 draws and 4 defeats, also, the team's statistics reflect a total of 17 goals for and 18 goals against, a situation that leaves them with a negative balance of -1 but favorable since they have been able to balance things in attack. The Seagulls already beat Swansea in the last round, a team that also plays in the Championship and will look to be the executioner of yet another team when they face West Bromwich. 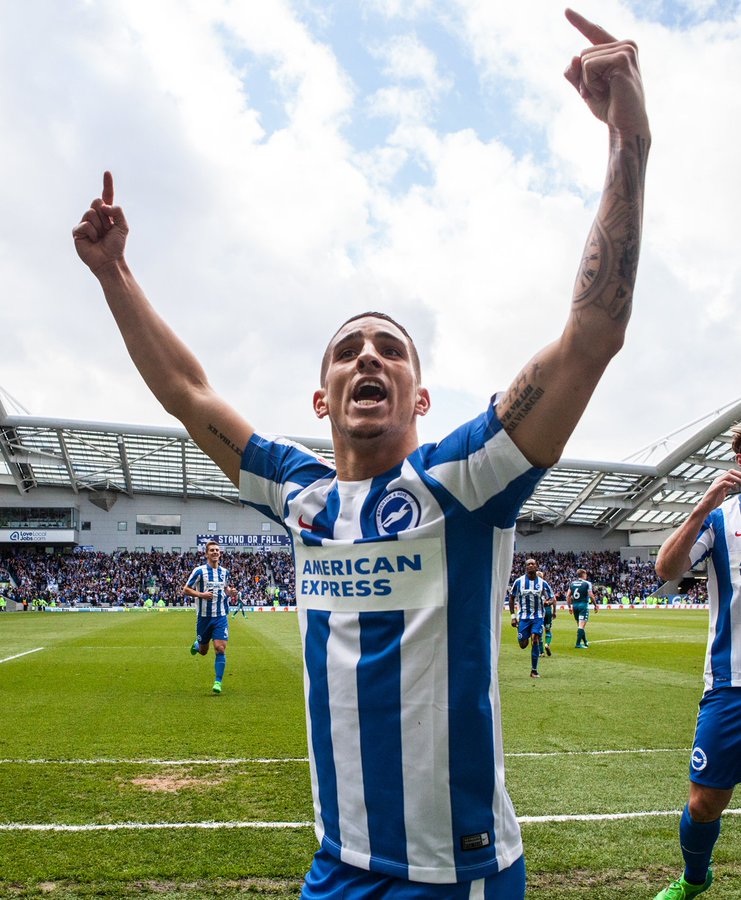 The Baggies will have the opportunity to play the tie at home, something that could be fundamental for this duel as they will have the support of their fans and will know how to take advantage of their familiarity with the pitch. Likewise, for West Bromwich fans, this is a match that generates illusions because in the Championship they have not done things badly, being the fourth team in the general table that has been the product of 11 wins, 8 draws and 5 defeats, also, they have a total of 30 goals for and 18 goals against, a situation that leaves them with a difference of +12 in the team statistics. On the other hand, their rival has not been showing their best soccer so they could take advantage and advance to the next round of the mythical FA Cup.
1:45 PM7 months ago

The road to the grand final of the FA Cup in England continues, after having completed the second round of elimination, the third round arrives looking for the teams capable of obtaining a victory in a duel where there will be no tomorrow and continue alive on this road with the hope of continuing to transcend in the competition. This time it will be the turn for West Bromwich and Brighton to face each other, both teams managed to survive the previous round and will seek to continue with the good pace for this tie, on the one hand, the Baggies are in 4th place in the overall table in the Championship, looking to return to the top circuit of English soccer, on the other hand, Brighton is 10th in the overall table in the Premier League and aspire to continue with the good pace shown throughout the season in the FA Cup. For this match it would seem that the visitors are the favorites, however, history dictates that anything can happen in the FA Cup.
1:40 PM7 months ago

The West Bromwich vs Brighton match will be played at the The Hawthorns Stadium, in West Bromwich, England. The kick-off is scheduled at 10:00 am ET.
1:35 PM7 months ago

Welcome to VAVEL.com’s LIVE coverage of the 2022 FA Cup: West Bromwich vs Brighton!