Thank you for following the broadcast of the semifinal of the Supercopa de España where Athletic beat Atlético de Madrid.
3:49 PM14 days ago

After review, Giménez has been expelled.
3:39 PM14 days ago

Herrera's cross was met late by Suárez and he was cautioned.
3:34 PM14 days ago

Mikel Vesga has been cautioned.
3:19 PM14 days ago

Koke and Lemar come out

Again from a corner kick, but this time Williams comes up with a solid finish to make it 2-1.

Nico Williams enters the area to shoot a shot that Oblak covers at the near post.
3:04 PM14 days ago

Álvarez from a set-piece strikes a header to tie the game 1-1.

Williams and Berchiche came in

Berenguer and Balenziaga came out.

Suárez came in and Correa came out, Atlético substitution.

Iñaki's flash to Oblak's location, who again saves his goal.
2:49 PM14 days ago

Alvarez's powerful header is saved by the goalkeeper on the goal line to prevent the equalizer. Great intervention by Oblak.
2:39 PM14 days ago

Joao Felix's header inside the box hits the post and then the goalkeeper to open the scoring 1-0.

Félix's attempt at a breakaway was blocked by the defense and the ball ended up in the corner.
2:29 PM14 days ago

Llorente and Kondogbia leave the team.

Lemar's mid-range shot hits the defensive wall and ends up in the corner.
2:19 PM14 days ago

The second half begins between Atlético and Athletic.
2:14 PM14 days ago

Félix was able to deflect the ball away from the goalkeeper's poor exit from a corner kick.
2:04 PM14 days ago

Kondogbia's mid-range shot is saved by the goalkeeper without problems.
1:59 PM14 days ago

The actions have been less and less in the rival goals and the guest of honor does not arrive.
1:54 PM14 days ago

Dangerous service inside the area that Unai controls without bouncing.
1:49 PM14 days ago

Little by little the colchonero dominance faded away as Athletic began to push forward.
1:39 PM14 days ago

They claimed a penalty in Athletic's favor, but the referee ended up awarding the ball to the offender.
1:34 PM14 days ago

Williams with the flash inside the area that the goalkeeper saves with his feet.
1:29 PM14 days ago

Félix again takes the overhead kick, but again he was caught offside.
1:24 PM14 days ago

Joao Felix was offside in the first seconds after the first goal had already been scored.
1:19 PM14 days ago

The game between Atlético and Athletic begins.
1:14 PM14 days ago

The game between Atlético de Madrid and Athletic Club for the semifinal of the Spanish Super Cup will kick off in a few minutes.
1:09 PM14 days ago

Mexico's Héctor Herrera will not be a starter today, however, he was contemplated by Diego Simeone and is on the substitutes' bench with the possibility of coming on for the second half.
1:04 PM14 days ago

With the red and white

Although they are in another country, Atletico Madrid will play as the home team this afternoon and, therefore, they will wear their traditional red and white uniform with the mission of advancing to the final. 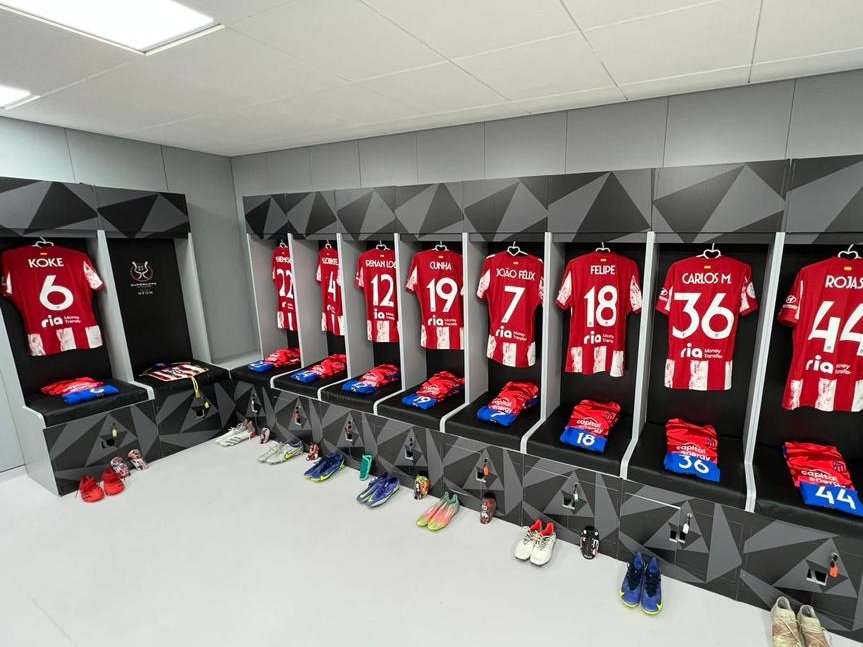 What happens if they tie?

A draw today will not happen, however, if they equalize in the first 90 minutes, it will force overtime and, if it stays that way, the finalist will be defined from the penalty spot.
12:34 PM14 days ago

In the history of the Supercopa de España, these two clubs have been among the most winning clubs, as Atlético de Madrid has won two titles (the last one in 2014) and Athletic has three trophies and is the reigning champion.
12:29 PM14 days ago

There is already a rival

The first semi-final was played on Wednesday, in which Real Madrid suffered more than enough, but beat Barcelona in extra time 3-2, so they are already waiting for the winner of this match to meet in the final.
12:24 PM14 days ago

The second semifinal for the Supercopa de España will be underway with the electrifying clash between Atlético de Madrid and Athletic Club de Bilbao. We begin with VAVEL's coverage of the game.
12:19 PM14 days ago

Do not miss a detail of the match with the live updates and commentaries of VAVEL. Follow along with us all the details, commentaries, analysis and lineups for this Atletico Madrid vs Athletic Club Bilbao match for the Spanish Super Cup.
12:14 PM14 days ago

What time is Atletico Madrid vs Athletic match for Spanish Super Cup?

This is the start time of the game Atletico Madrid vs Athletic of 13th January in several countries:

The colchonero team has a minimal advantage in the last five matches when facing each other in any field where they have a record of two wins, for two draws and only one defeat.

If Athletic have picked up some points they shouldn't have, it's attributed to the interventions of goalkeeper Unai Simon, who has had outstanding performances under the three posts and could become one of the keys to this game.
11:59 AM14 days ago

In view of the injuries and Covid-19, the responsibility for the goal should fall on the Argentine Angel Correa, who has had a difficult season, but who has just scored one of the goals in the draw against Villarreal.
11:54 AM14 days ago

Athletic: to make a splash

Of the four teams in this phase, Athletic seems to be the weakest opponent and the one that has little chance of winning the title, however, they will try to make this element work in their favor. Last Sunday they drew goalless against Alavés as visitors.
11:39 AM14 days ago

Atletico's season in LaLiga has not been quite as good as last year when they were champions, proof of this was last Sunday's 2-2 draw at home to Villarreal, however, they will look to turn the page and try to win another trophy under Diego Simeone's hand.
11:34 AM14 days ago

Why are Atlético Madrid and Athletic in the semifinals?

The Atletico Madrid vs Athletic match will be played at the King Fahd Stadium, in Riad, Saudi Arabia. The kick-off is scheduled at 2:00 pm ET.
11:24 AM14 days ago