We hope you enjoyed the Querétaro vs Pumas UNAM matchday 2 of the Torneo Clausura 2022. Keep checking back on VAVEL.COM for updates throughout the day.
10:59 PM4 months ago

The match ends at the Estadio Corregidora, Pumas beat the Gallos Blancos as visitors and continue as leaders of the tournament.
10:42 PM4 months ago

LAST MINUTES! The final stretch of the match begins, Pumas is close to getting the victory and continue as leaders of the competition.
10:40 PM4 months ago

This is how Pumas put the third goal on the scoreboard.

GOOOOOOOOOL FOR PUMAS! GOAL FOR THE UNIVERSITARIOS! GREAT PASS BY SAUCEDO THAT IS TAKEN ADVANTAGE OF BY ROGEIRO AND THEY ALREADY HAVE A TWO-GOAL LEAD.
10:27 PM4 months ago

VAR. Alan Mozo is sent off after the review of the play for the foul on burrito González.
10:25 PM4 months ago

NO GOAL! THE VAR DETERMINES THAT THERE IS NO GOAL DUE TO A HANDBALL INSIDE THE AREA.
10:09 PM4 months ago

GOOOOOOOOOOOOOOOL FOR PUMAS! GOOOOOOOOOL BY DIOGO! THE UNIVERSITARIOS CONTINUE TO BE UNSTOPPABLE AND SCORE THE THIRD GOAL
10:06 PM4 months ago

The second half begins at the Corregidora, Pumas continue to lead the match after a great first half by both teams.
9:49 PM4 months ago

GOOOOOOOOOL FOR PUMAS! GREAT GOAL BY THE UNIVERSITARIOS! MARCO GARCÍA PUTS IN A SHOT THAT WASHINGTON AGUERRE COULDN'T STOP AND PUMAS TURN IT AROUND.
9:34 PM4 months ago

CLOSE TO THE SECOND! Perg's header from a corner kick goes just wide of the post.
9:29 PM4 months ago

This is how Pumas tied the match at the Corregidora.

GOAL BY LEO LÓPEZ! GOOOOOOL FOR THE PUMAS. LEO CUT BACK AND FIRED A SHOT INTO THE BACK OF THE NET. THE GAME IS TIED.
9:14 PM4 months ago

Washington Aguerre makes a sensational save from Leo López's header to prevent the equalizer.
9:12 PM4 months ago

In this way, the Gallos Blancos scored the first goal of the match.

GOOOOOOOOOOOOOL FOR THE WHITE ROOSTERS! GREAT GOAL BY THE HOME TEAM! SEPULVEDA SCORES WITH A DOVE SHOT AND THE ROOSTERS ALREADY WIN IT 1-0!
9:01 PM4 months ago

The match kicks off at the Estadio Corregidora, as Gallos and Pumas battle for three points in the start of Matchday 2.
8:53 PM4 months ago

SO THE ROOSTERS COME OUT

This is how the Gallos Blancos will go out in search of their first three points. 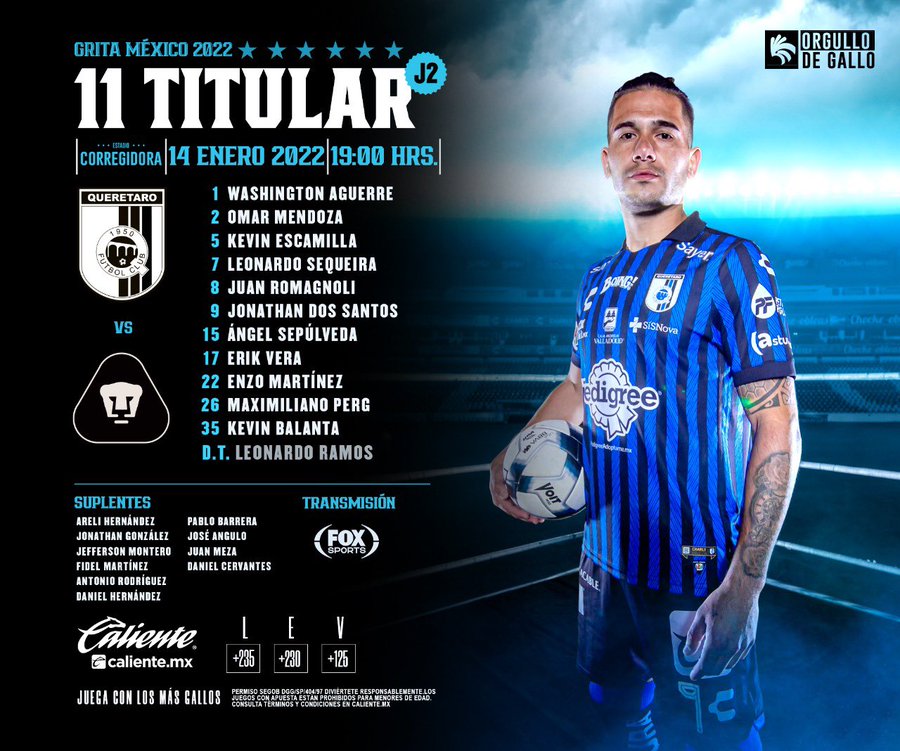 THIS IS HOW UNIVERSITY STUDENTS

This is the starting eleven that Andrés Lillini will send to the field to face the locals. 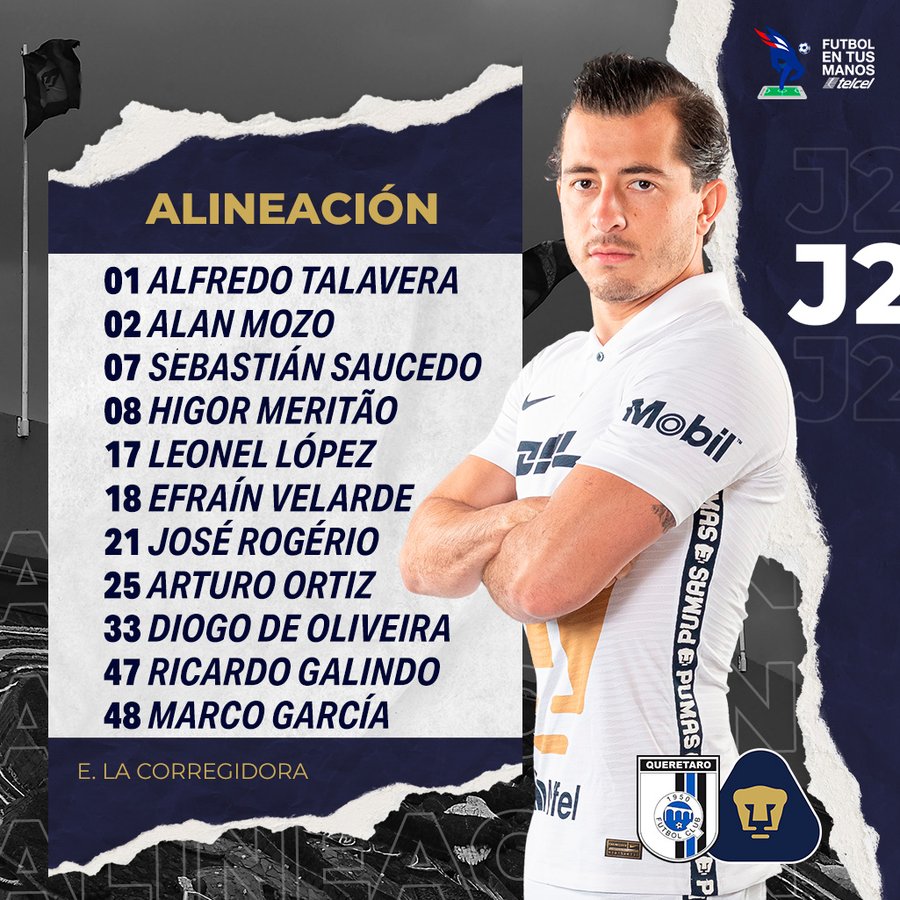 The National University Pumas announced this morning that two of their most important players will be out of action with the first team for at least a week or more due to various injuries.

The first case is centered on the university's idol and goal scorer, Juan Ignacio Dinenno. The Argentinean "killer" presented a grade 1 injury in the medial collateral ligament of his right knee and it is expected by the medical staff that his recovery will take at least a week.

Another of the affected players is Favio Álvarez, the Pumas forward suffered a tendinopathy in his left calcaneus and will have to rest for at least a week or depending on the evolution of the injury as the days go by.

Having won 1 matches, obtained 0 defeats and 0 draws for 1 matches played within the Primera Division. Clausura, Pumas Unam is in 1st place in the championship. A negative moment is that in period 3 their opponents most often have more chances to score, but they compensate easily with the period between minutes 60-75 scoring 0 goals. However, Pumas Unam relies more on its attack than its defense. The club has a very enviable season average (5 goals scored and 0 goals conceded per game).
8:33 PM4 months ago

After 1 matches played in the Primera Division. Clausura, Queretaro FC achieved 1 point, which allowed the team to get into mid-table, occupying 9th position - a rather modest place in the championship. With 0 wins, 1 draw and 0 losses it was not enough to make them one of the top teams, but it was enough to place them in the middle of the table. Moreover, 0 goals scored on average per game and 0 conceded is not a statistic to reach great heights. The most danger to their opponent's goal Queretaro FC makes in the period from 0-15 minutes of the match. In this time they have scored 1 goal. While this club misses mostly between 16-30 minutes and did so on 0 occasions.
8:28 PM4 months ago

ALREADY IN THE STADIUM

Universidad Nacional's Pumas are already at the Estadio Corregidora, ready to face their duel against Gallos.

The statistics of the matches between the teams show us the following: in 35 matches played Queretaro FC celebrated victory in 13 matches, but Pumas Unam won 17. In addition, we should not forget about the draws that occurred 5 times between these clubs. The last time the teams played against each other was on August 14, 2021, the match ended with a score 0-0. The stats of goals scored against each other 51 AND 50.
8:08 PM4 months ago

The wait is over, Liga MX is back with all the adrenaline for Day 2 of Mexican soccer, Gallos and Pumas will meet at the Estadio Corregidora. Pumas are coming off a great match against Toluca, where they won, won and scored a resounding 5-0. Querétaro drew 0-0 against Rayados at the Steel Giant with an outstanding performance by goalkeeper Washington Aguerre and will be looking for their first three points of the tournament today at home.
8:03 PM4 months ago

Do not miss a detail of the match with the live updates and commentaries of VAVEL. Follow along with us all the details, commentaries, analysis and lineups for this Queretaro vs Pumas match.
7:58 PM4 months ago

What time is Queretaro vs Pumas match for Liga MX?

This is the start time of the game Queretaro vs Pumas of 14th January in several countries:

After the great performance against Toluca, the player to watch for this match will be Rogerio de Oliveira. Last match he scored a brace against the Diablos Rojos and contributed to the goal in Day 1, now, after gaining the confidence of the D.T., Rogerio will be looking to continue his goal scoring streak and add to his team to continue as super leader in the current tournament. 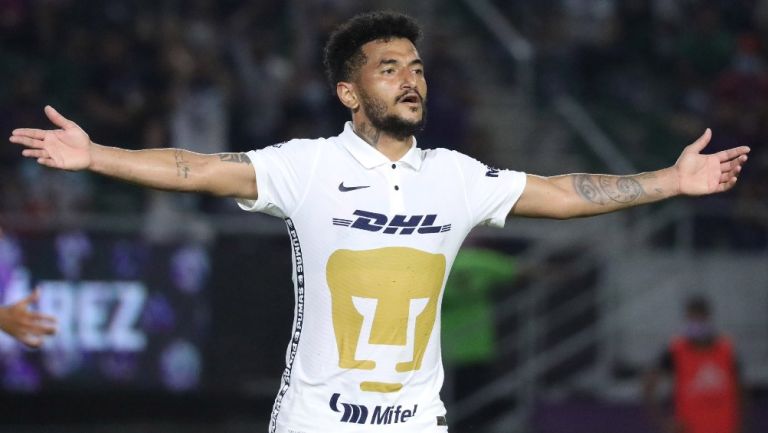 Watch out for this Querétaro player:

An old acquaintance of Mexican soccer and at the time, one of the fundamental pieces in the national team, Pablo Barrera will be the player to follow due to his great trajectory and experience that he possesses on the field, same that contributes a lot to the Gallos' midfield. Pablo Barrera started the tournament in a great way by being a starter in the first match and playing 83% of the minutes in Matchday 1. Likewise, in the previous tournament he was a pillar in the Queretaro team's scheme as he was a starter in 15 Matchdays and only came on as a substitute in two, he also averaged 1 assist and 1 goal. This will be a special duel for Pablito Barrera as he will be facing the team he loves and could score at any moment. 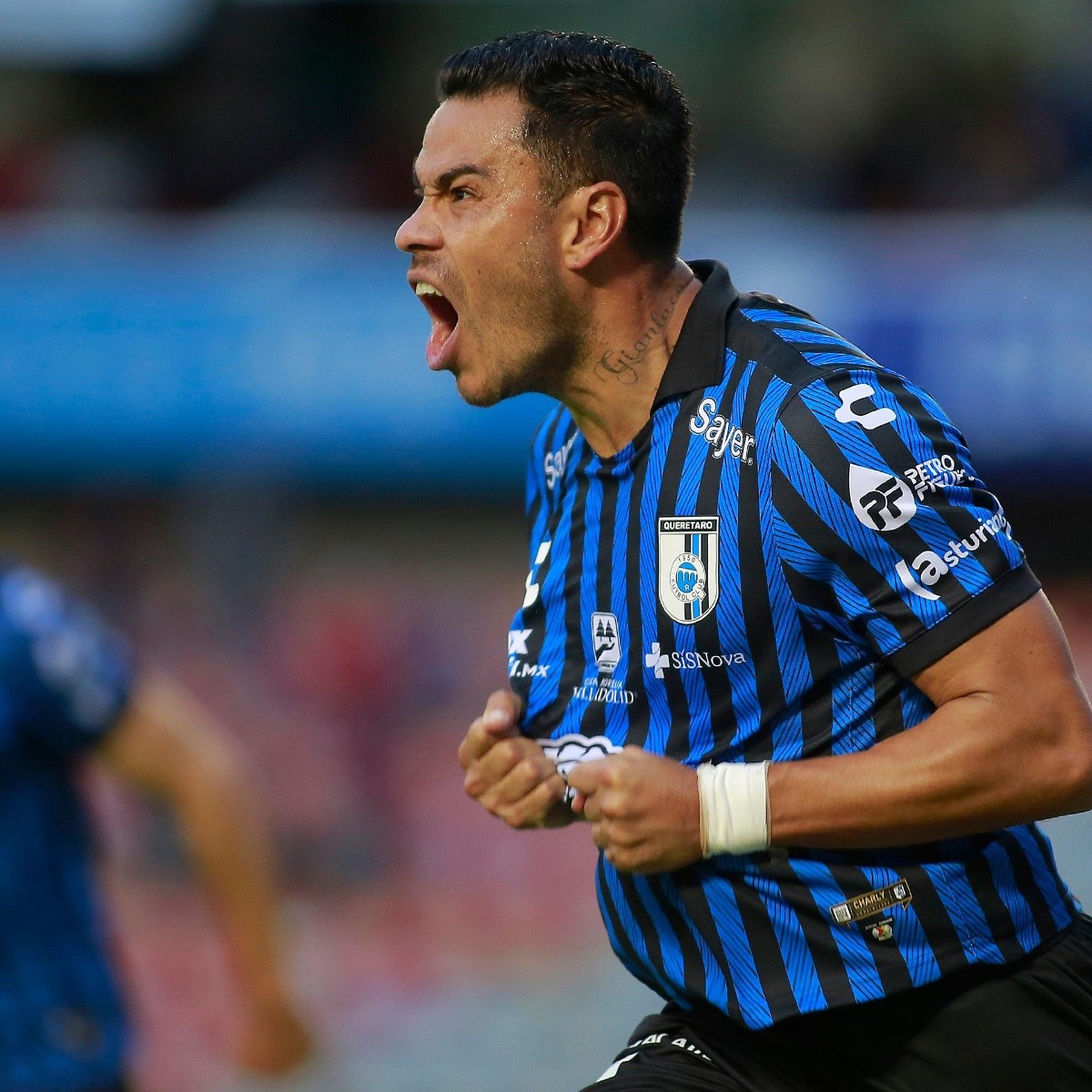 La Corregidora de Querétaro Stadium is located in the city of Querétaro, in the state of Querétaro, Mexico. It is home to Querétaro Fútbol Club, a Mexican First Division team. It also hosted Cobras (1986-87), Atlante (1989-90), TM Gallos Blancos for 12 games during the 1994-95 season, when Tampico Madero moved out of the Tamaulipas Stadium due to lease problems, and Pumas de la UNAM between 1999 and 2000 during the student strike. It was named in honor of the heroine of Mexico's Independence, Josefa Ortiz de Domínguez, wife of the corregidor of Querétaro, Miguel Domínguez.
7:28 PM4 months ago

The Gallos Blancos of Querétaro and Pumas of Universidad Nacional have met on a total of 38 occasions (14 wins for the Gallos, 5 draws and 19 wins for the Universitarios), with a slight advantage for the visitors. Likewise, in terms of goals scored, it is Pumas who have the advantage, scoring 58 goals against Querétaro, while the locals have scored on 53 occasions. Their last meeting was on Matchday 4 of the Apertura 2021, when Pumas hosted Gallos at the Olímpico Universitario and ended in a 0-0 draw.
7:23 PM4 months ago

An illusion that grows

The Pumas of Universidad Nacional continue to sweep the Liga MX, as after closing the Apertura 2021 with a spectacular soccer in the final phase of the tournament, last Monday in Day 1 they beat Toluca in the Estadio Olímpico Universitario with an overwhelming score of 5-0 and with that they climbed to the top of the general table to become the real leaders of the competition for the time being. Now, Andrés Lillini and company will be looking to continue the good form they showed at the Corregidora to keep the fans excited as they and their team seek their eighth star in their history.
7:18 PM4 months ago

Querétaro's Gallos Blancos will be looking for their first three points against Universidad Nacional's Pumas. The Querétaro team kicked off the Clausura 2022 by facing Rayados at the BBVA Stadium. As in the previous tournament, Gallos began their participation in the competition with a 0-0 draw where emotions were lacking and opportunities were in short supply. Despite the fact that they started the championship by winning, it is important for Querétaro to continue in the same way, and even better if they do so by taking three points, as in the previous semester, Leonardo Ramos' men were far from qualifying for the Playoffs, being second to last in the general table with only 15 points out of 51 played.
7:13 PM4 months ago

The Apertura 2021 is over, the Clausura 2022 has begun in Liga MX and with it a long 16-game road continues for all teams in search of qualifying for the Liguilla or Playoffs of Mexican Soccer and with it the opportunity to fight for the coveted title that will accredit them as champions of Mexican football. For Querétaro, this is a new opportunity to present decent results in front of their fans because after what they did in the Apertura 2021, the Gallos are in great debt with their fans after finishing second to last in the League, however, the draw against Rayados gives hope and raises the team's hopes of fighting for the Mexican soccer title. On the other hand, Pumas dazzled at the start of the competition after winning, enjoying and beating Toluca at the Olímpico Universitario with a thunderous score of 5-0. Lillini is still in great shape after the great performance shown in the last group stage and will be looking to continue like this now against Querétaro.
7:08 PM4 months ago

The Queretaro vs Pumas match will be played at The Corregidora Stadium, in Queretaro, Mexico. The kick-off is scheduled at 20:00 pm ET.
7:03 PM4 months ago

Welcome to VAVEL.com’s LIVE coverage of the 2022 Liga MX: Queretaro vs Pumas!