Thank you for listening to this Premier League match. Have a good afternoon and see you next time!
11:54 AM4 months ago

Liverpool return to the field on Thursday (20), when they face Arsenal in the second leg of the League Cup semi-final. Brentford, on the other hand, plays on Wednesday (19), when it receives Manchester United, in the Premier League
11:52 AM4 months ago

With goals from Fabinho, Chamberlain and Minamino, Liverpool beat Brentford and get three points back in the Premier League!
11:48 AM4 months ago

Gordon received in front and hit it hard, but Fernandez deflected it away. In the rebound Alexander-Arnold received in the area and filled the foot, but isolated!
11:41 AM4 months ago

Liverpool substitution: Diogo Jota is out and Gordon is in.
11:37 AM4 months ago

When Brentford's team made a mistake, Liverpool had the ball inside the area, when Firmino played for Minamino to hit an empty net! And in the Liverpool left Firmino and entered Milner!
11:34 AM4 months ago

Liverpool substitution: out comes Chamberlain and in comes Minamino. Substitution at Brentford: Mbeumo is out and Jensen is in.
11:29 AM4 months ago

Robertson got the cross from the left and sent it to the head of Chamberlain, who headed hard and scored Liverpool's second goal!
11:27 AM4 months ago

Substitution at Brentford: Baptiste is out and Wissa is in.
11:27 AM4 months ago

Diogo Jota received the pass and invaded the area, taking out his marker and hitting it hard, but Fernandez sprawled once again!
11:22 AM4 months ago

Diogo Jota managed to get the shot already inside the area and stamped the right post of Fernandez, who still saved the shot on the rebound of Firmino!
11:19 AM4 months ago

Norgaard got the pass and Mbeumo hit it hard, but from the right side of the goal!
11:10 AM4 months ago

Fabinho hit the ball hard from outside the area, and Fernandez got the ball in the middle of the goal.
11:09 AM4 months ago

Substitution at Brentford: Henry leaves, Canos enters.
11:05 AM4 months ago

Hernderson makes the first touch on the ball and it rolls into the second half!
11:04 AM4 months ago

With a goal from Fabinho, Liverpool goes to the break winning the match!
10:48 AM4 months ago

From a corner kick coming from the left, the ball was lifted into the box and passed through the defense, arriving at Fabinho, at the second post, who headed the ball into the back of the goal!
10:46 AM4 months ago

Toney broke into the box and played it back to where Janelt was to finish over Robertson, despite Toney being offside on the play.
10:42 AM4 months ago

Toney hit a shot from outside the box and sent it through the right side of the goal!
10:36 AM4 months ago

Janelt came through the middle and hit a shot from outside the area, but it went over the goal.
10:26 AM4 months ago

At the corner coming from the right Toney deflected the ball and it was left to Van Djik, who hit it hard and saw Fernandez deflect it away!
10:22 AM4 months ago

Diogo Jota was going through the marking, but Ajer gave in the middle and made the foul, receiving a yellow.
10:17 AM4 months ago

Alexander-Arnold hit it hard from outside the box and sent it over the goal!
10:16 AM4 months ago

Fabinho tried to lift the ball into the box and Chamberlain tried to deflect it, but the ball went through and Fernandez saved, but Chamberlain was offside.
10:14 AM4 months ago

In yet another round of lifting in the area Diogo Jota headed the ball over the goal.
10:12 AM4 months ago

In the corner coming from the left, the ball was bounced inside the area and Diogo Jota finished, but over the goalkeeper Fernandez, winning another corner!
10:07 AM4 months ago

Mbeumo took off down the left and struck hard, but he was already offside.
10:03 AM4 months ago

After a slight delay by the linesman and the anti-racism demonstration, Toney takes the first touch and the ball is rolling for the first half!
9:57 AM4 months ago

Norwich beat Everton 2-1, Wolverhampton beat Southampton 3-1, and there were two more draws, the first between Newcastle and Watford, 1-1, and the second between Aston Villa and Manchester United, 2-2.
9:34 AM4 months ago

The whole round took place yesterday and there will only be one game today besides this one: West Ham vs Leeds. Yesterday Brighton drew 1-1 with Crystal Palace and Manchester City beat Chelsea 1-0.

The players appear on the field to start warming up.
9:17 AM4 months ago

Brentford is lined-up and comes to the field with: 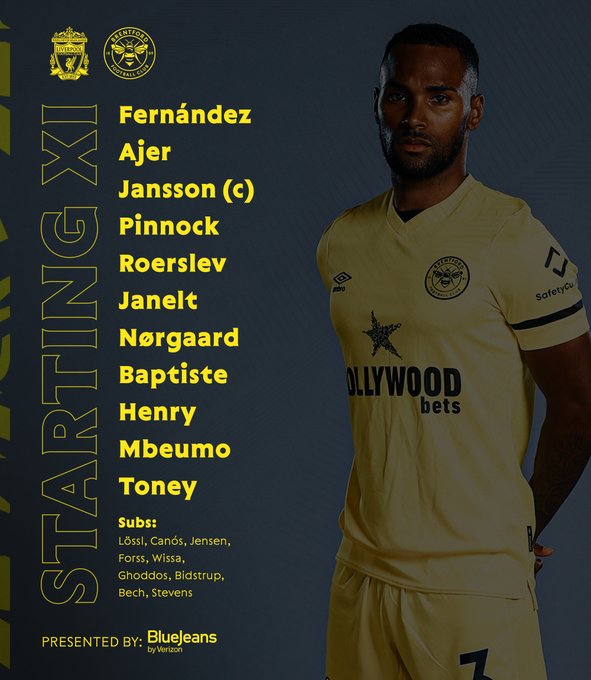 Liverpool is lined-up and comes to the field with:

The Reds to face @BrentfordFC 👊 #LIVBRE

Now the broadcast of the Premier League match between Liverpool and Brentford begins!

Do not miss a detail of the match with the live updates and commentaries of VAVEL. Follow along with us all the details, commentaries, analysis and lineups for this Liverpool vs Brentford match.
8:57 AM4 months ago

How to watch Liverpool vs BrentfordLive in TV and Stream

If you want to watch the game Liverpool vs Brentford live on TV, your options is: Telemundo.

What time is Liverpool vs Brentford match for Premier League?

This is the start time of the game Liverpool vs Brentford of 16th January 2022in several countries:

Jonathan Moss will referee the match with the assistance of Marc Perry and Timothy Wood. Lee Mason will be in charge of VAR.
8:42 AM4 months ago

The probable Brentofrd team for the game is: Fernandez, Ajer, Jansson and Pinnock; Roerslev, Janelt, Norgaard, Jensen and Henry; Wissa and Toney.
8:37 AM4 months ago

The probable Liverpool team for the match is: Alisson, Williams, Matip, Van Dijk and Tsimikas; Henderson, Fabinho and Jones; Diogo Jota, Firmino and Minamino.
8:32 AM4 months ago

Both teams have a long list of absentees. Phillips, Thiago Alcantara, Elliott and Origi are out through injury for the Reds, while Canos, Dasilva, Raya, Goode and Jorgensen are out for Brentofrd. Salah, Mané and Keita for the hosts, and Onyeka for the visitors, are with their national teams at the Africa Cup of Nations.
8:27 AM4 months ago

Liverpool figure at the top of the table, with 42 points and in third position, one behind Chelsea, but seeing leader Manchester City shoot up, already with 56 points. In addition, the Reds are five points ahead of West Ham, seven ahead of Arsenal and nine ahead of Tottenham. Brentford, meanwhile, is with 23 points, in 14th position, tied with Aston Villa, and one point behind Crystal Palace and Southampton, being then four ahead of Everton and Leeds.
8:22 AM4 months ago

Brentford has a win and a loss, both by the same score: 4-1. The victory was on Saturday (8), against Port Vale, in the FA Cup, with goals from Forss and Mbeumo (3), while Haratt scored. And on Tuesday (11), the defeat was to Southampton, with goals from Bednarek, Llorente, Broja and Che Adams, while Janelt deducted.
8:17 AM4 months ago

Liverpool comes to the match after two matches for the Cups. For the Carabao Cup, the draw was without goals, with Arsenal, last Thursday (13). And the victory was for the FA Cup, 4-1, on Sunday (9), against Shrewsbury Town, with goals from Gordon, Fabinho (2) and Firmino, while Udoh even opened the scoring.
8:12 AM4 months ago