Goooooooool for Spezia, Gyasi with a last minute cross to beat Milan 2-1 and surprise by taking the 3 points at the San Siro Stadium.
3:19 PM4 months ago

Last minutes of the match, Spezia defends with all its players this tie and Milan pushes for the winning goal.
3:10 PM4 months ago

Corner kick for Milan, who continue to press.
3:06 PM4 months ago

Milano is looking for a dangerous move on the wings, the 3 points will give them the overall leadership.
2:57 PM4 months ago

Milan presses after the equalizer and wants the advantage in the match.
2:53 PM4 months ago

Gooooooooooooool for Spezia, a great cross for Agudelo to tie the match.
2:47 PM4 months ago

Several changes are made on Spezia's side, strategist Thiago is looking for a more offensive team.
2:43 PM4 months ago

The away team waits for Milan's attack at the back, they are not looking for an equalizer in these minutes.
2:38 PM4 months ago

Milan started the second half with full control of the ball and went forward in search of the second goal.
2:33 PM4 months ago

Second half kicks off at the San Siro Stadium
2:18 PM4 months ago

The first half is over, Milan are leading 1-0 on a mistake by the Spezia defense.
2:17 PM4 months ago

Goooooooool for Milan, Leao scored the first goal of the match after a careless defensive mistake.
2:16 PM4 months ago

Theo Hernandez misses the penalty, sending it wide and missing the chance to open the scoring.
2:14 PM4 months ago

The referee awards a penalty kick to Milan.
2:11 PM4 months ago

In the last minutes of the first half, both teams have stopped attacking, and it looks like we will go into the break with a scoreless draw.
2:07 PM4 months ago

The match is constantly stopped because of so many fouls, Spezia gradually keeps the ball.
2:03 PM4 months ago

Very little activity in either area, with both teams unable to find clarity in the final zone.
1:59 PM4 months ago

Milan looked to generate danger on the flanks but the visitors' defense closed down and prevented any goal scoring.
1:54 PM4 months ago

The ball is fought hard in midfield, but Milan begins to impose itself with long-range shots that pass close to the goal.
1:51 PM4 months ago

Leao came close to opening the scoring for Milan after a cross shot that went wide.
1:39 PM4 months ago

Spezia came close to their first goal but the Milan defense stole the ball in a good team play.
1:35 PM4 months ago

Little by little the intensity of the match increases, both teams begin to analyze the game, although the home team continues to dominate.
1:32 PM4 months ago

Milan came close with its first dangerous arrival, dominating from the first minutes.
1:30 PM4 months ago

The match kicks off, Milan and Spezia meet at the San Siro Stadium.
1:22 PM4 months ago

All set on the San Siro pitch 10 minutes before kickoff
1:17 PM4 months ago

The teams are already warming up on the San Sir's pitch, a few minutes before the start of the match and in search of the 3 points in the 23rd round of the Serie A.
1:07 PM4 months ago

The last time these two teams met was on September 25 last year, with a favorable result for AC Milan 2 goals to 1, the last time Spezia defeated the locals was on February 13 last year, when they defeated Milan 2-0.
1:02 PM4 months ago

This is the lineup with which AC Milan will take the field: 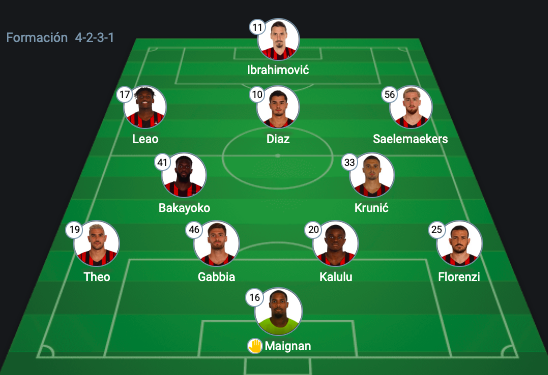 This is the lineup with which Spezia will take the field: 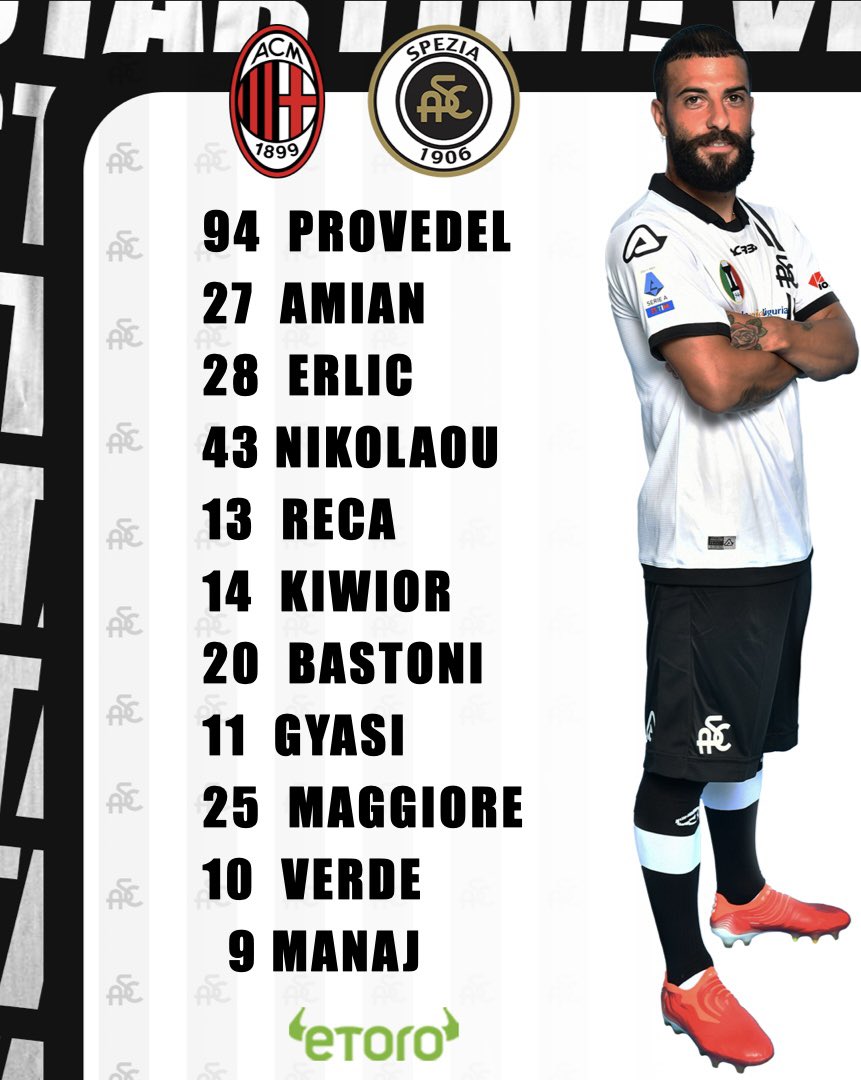 The two players who could make the difference today are Zlatan Ibrahimovic who has 8 goals and 2 assists for AC Milan and Emmanuel Gyasi who has 3 goals for Spezia.
12:42 PM4 months ago

The central referee in charge of the match will be Marco Serra.
12:37 PM4 months ago

The record leans towards Milan, as in the last 4 matches, the numbers indicate 3 games won for AC Milan, 0 draws and 1 win for Spezia, so Milan will come out as favorites.
12:32 PM4 months ago

In a few moments we will share with you the AC Milan vs Spezia live starting lineups, as well as the latest information on the match from the San Siro Stadium in Italy.
12:27 PM4 months ago

Where and how to watch AC Milan vs Spezia online and live.

The match will be broadcasted on ESPN and Star +.

25 year old left back born on November 5, 1996 his only team has been Spezia, he has 20 games with the club with 3 goals and 3 assists, one of the most important players of club and a leader in the defensive, with the Italian national team he has 4 games and 1 goal scored. 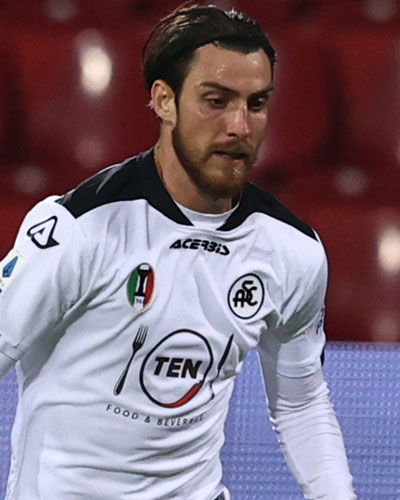 Swedish forward, with 40 years is one of the most important players for Milan and a legend for Sweden and in the history of soccer, with a height of 1.95 has played in World Cups, Euro Cups, World Cup qualifiers, Champions League among other important tournaments in the world, currently has 13 games played and 8 goals with the Italian team, with his national team has 120 games and 68 goals which makes him a legend for his country. 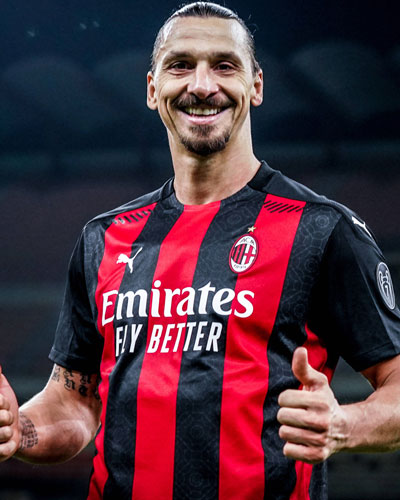 This is the last lineup with which Spezia took the field: 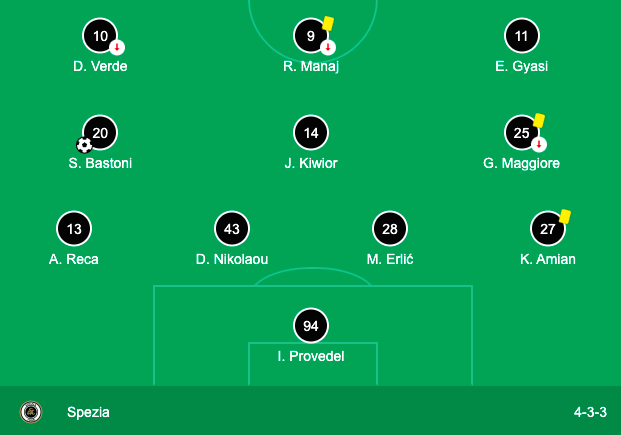 This is the last lineup with which AC Milan took the field: 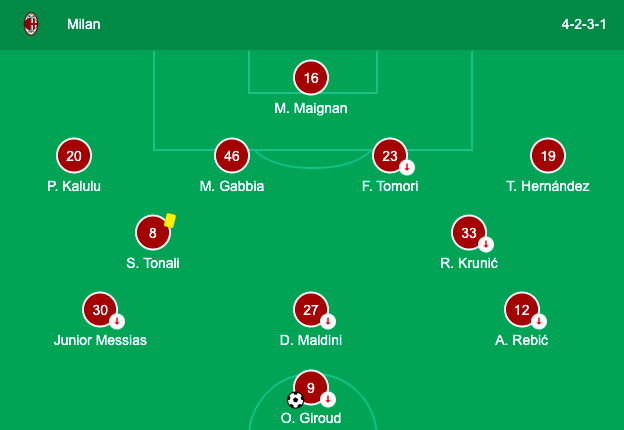 Located in Milan, Italy, it has a capacity for 80,018 spectators and was inaugurated on September 19, 1926, a historic venue for Italian soccer, and is home to two of the most important teams in Italy, AC Milan and Inter Milan.
11:57 AM4 months ago

How do the teams arrive?

Welcome to the AC Milan vs Spezia live stream, matchday 23 of the Serie A Tournament. The match will take place at the San Siro Stadium at 11:30 am.