Hull City returns to winning ways after seven games, having not won since November 27 against Milwallc .
5:43 PM4 months ago

Thank you all for joining us in this intense duel with an exciting encounter, it has been a pleasure to be with all of you. ¡SEE YOU ALL AGAIN! . .
5:41 PM4 months ago

Hull City face Bournemouth at the weekend, while Blackburn host Middlesbrough at home .
5:39 PM4 months ago

END OF THE MATCH: HULL CITY PULLS OFF A SURPRISE HOME WIN

Smith enters the field, replacing Longman, who has provided both assists .
5:28 PM4 months ago

The first card of the match goes to Rothvell, the Blackburn midfielder
5:25 PM4 months ago

Eaves almost got to the center, who was looking for his double.
5:18 PM4 months ago

72' The third could have come

Hull City could have increased the difference, but Honeyman's shot hit the crossbar
5:14 PM4 months ago

The second came after a cross from the right by Longman was headed into the back of the net by Eaves.
5:10 PM4 months ago

Blackburn are still behind, but they keep trying, Brereton finds Edurn, but the ball is saved by the Hull City goalkeeper.
5:01 PM4 months ago

Hull City's goalkeeper saves Lenin's shot after he cut back
4:55 PM4 months ago

50' Arrival of the visitors

The striker Brereto shot, but the shot was blocked;
4:47 PM4 months ago

The ball is rolling again at the MKM Stadium
4:32 PM4 months ago

The German player's shot did not find the goalkeeper;
4:27 PM4 months ago

36' Another one for Blackburn

The visitors are still looking for the equalizer, this time it came with a corner kick by Lenihan, which went over the goal;
4:20 PM4 months ago

Kadra's overhead kick was headed over the top, but Bernand was able to clear the ball to prevent the equalizer.
4:09 PM4 months ago

Chance for Blackburn with the shot of the top scorer of the team, but could stop the goalkeeper Baxter.  Although the rebound fell to Khadra, the playmaker was offside.
4:02 PM4 months ago

After a play between Eaves and Longman ended with the wonderful appearance of Honeyman, who beat two opponents and scored the first for Hull City.
3:48 PM4 months ago

The ball is rolling at the MKM Stadium
3:42 PM4 months ago

In five minutes Hull City vs Blackburn, the 22 players are already in the dressing room.
3:38 PM4 months ago

The Blackburn player is the second highest scorer in the Championship with 20 goals so far this season and one assist. These figures, has made Sevilla look at the attacker; 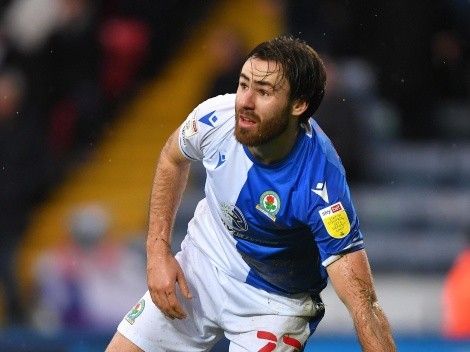 Hull City are the third worst home team in the Championship

McCann's team has only twelve points from twelve home games;
3:16 PM4 months ago

In 1 hour the match between Hull City and Blackburn will kick off, both the match and the preview can be followed here on VAVEL

How to watch Hull City vs Blackburn live in the Championship ?

f you want to watch the match Hull City vs Blackburn live on television, your option is Sky Bet Championship.

What time is the match Hull City vs Blackburn in the Championship ?

This is how to take a penalty with peace of mind

How does Blackburn Roves arrive ?

Blackburn have now gone ten consecutive Championship matches without defeat. Their last painful defeat came in November when they lost 7-0 to Fulham. They have only lost two away games this season. With 49 points they are third in the table, i.e. in the Play-Off zone for promotion and only two points behind the leader, who is currently the leader.
5:25 PM4 months ago

How does Hull City arrive ?

Hull City have lost four consecutive defeats and six consecutive games without a win. Tough week after the defeat to Everton in the FA CUP round of 32 in extra time and then with the defeat at home against Stoke City by 0-2. They are in the Championship standings with 23 points, just four points clear of the relegation zone;
5:20 PM4 months ago

56 meetings between Hull City and Blackburn have been won by Blackburn with 30 victories, while Hull City have won on twelve occasions. The other 14 remaining matches have ended in draws. The last meeting took place on September 14, 2021 in the EFL Championship where Blackburn won 2-0 at home with goals from Ayala and Ben Breeton. The last five times they have met, Blackburn have won the match. Hull City's last win came in 2018 in an FA CUP match.

The match will be played at Kinsgston Communications Stadium, a stadium that was built in 2002 and has a capacity of 255,504 spectators;
5:10 PM4 months ago

Hull City and Blackburn will meet in the match corresponding to the 24th round of the EFL Championship;

Welcome to VAVEL.COM's LIVE coverage of Hull City vs Blackburn in Championship