We hope you enjoyed the Valencia vs Sevilla matchday 22 of LaLiga. Continue to visit the VAVEL website to keep up to date with all the information that comes up throughout the day.
6:31 PM4 months ago

The game ends in a 1-1 draw between Valencia and Sevilla from the Estadio Mestalla. Mexico's Jesús Corona has already made his debut with the Sevilla shirt.
6:17 PM4 months ago

LAST 10 MINUTES! The last 10 minutes of the match begin, Sevilla and Valencia continue to draw by the minimum.
6:07 PM4 months ago

Lucas Ocampos (Sevilla) wins a free kick in the defensive half from Hugo Duro.
5:48 PM4 months ago

Thierry Correia (Valencia) left footed shot from outside the box is blocked.
5:42 PM4 months ago

The second half begins at the Mestalla Stadium, Valencia and Sevilla continue to draw by the minimum.
5:26 PM4 months ago

The first half ends at the Mestalla Stadium. Valencia and Sevilla are tied at the moment.
5:20 PM4 months ago

GOOOOOOOOOL FOR VALENCIA! GONCALO GUEDEES APPEARED TO TIE THE MATCH!
4:55 PM4 months ago

GOOOOOOOL FOR SEVILLA! REVIAL'S OWN GOAL GIVES THE VISITORS THE LEAD! THE ANDALUSIAN TEAM IS ALREADY AHEAD ON THE SCOREBOARD!
4:38 PM4 months ago

Sevilla close! Papu made his presence felt with a shot from outside the area but the attempt went wide.
4:33 PM4 months ago

The ball rolls from the Estadio Mestalla, Valencia hosts Sevilla in the LaLiga double-header.
4:17 PM4 months ago

In a couple of minutes we will start with the duel Valencia vs Sevilla; match corresponding to the 22nd round of LaLiga.
4:13 PM4 months ago

In Bordalás' team, the intention is none other than to get three points that will allow the team to get back on track to the European objective, after the small step backwards of the last few weeks. They are currently tenth, four points off the Europa League places. The only certain absence for the Valencianistas is Gabriel Paulista, while Wass, Helder Costa and Manu Vallejo are doubtful until the last minute. Carlos Soler seems to have fully recovered and will start in midfield.

Following the last-minute withdrawal of Cuadra Fernández, the referee for the match will be César Soto Grado from La Rioja, who has just officiated the Super Cup final in Riyadh and will be assisted by Estrada Fernández in the VAR. There are only four precedents with this referee in sevillista, all of them victories. Two seasons ago, he refereed the Cup match against Escobedo and the LaLiga match in Leganés. Last season, he did so in the home wins against Celta and Villarreal respectively. He has also whistled Valencia on four occasions, albeit in two wins, a draw and a defeat. In the current season, he blew the whistle in the draw against Atlético and the cup victory over Utrillas.

With all of last weekend's Copa history behind them, Sevilla FC are focused on their return to LaLiga, for a match of the highest demand as the one that will take them to Mestalla tonight. After taking thirteen points from the last fifteen that have been put within reach, Julen Lopetegui's side visit an opponent that has just lost in its last two games, both at home at the end of the year against Espanyol, and a few days ago at the Bernabéu. All this, with a list of absentees in the Sevillian side that, far from being reduced as the days go by, continues to complicate the already famous 'count' to which the coach usually mentions before each match.
4:10 PM4 months ago

Argentina has released on Wednesday the list of called-up players for the first FIFA matchday of 2022. In this case, Sevilla players Marcos Acuña, Gonzalo Montiel, Lucas Ocampos and Papu Gómez have been called up for the matches against Chile and Colombia, valid for Qatar 2022.
4:05 PM4 months ago

Sevilla is Real Madrid's main pursuer in the standings. It has not lost in six consecutive matchdays, losing points only in the match against Barcelona by 2-2. In the last matches, the team beat Cadiz and Getafe 1-0. However, the surprise was the exit from the Copa del Rey against Betis by 1-2. Moreover, this match was played the following day due to the riots.
4:00 PM4 months ago

Valencia looks good in attack this season. It scored in 11 matches out of the last 12. It is true that recently the team started to lose. Thus, it fell first to Espanyol 1-2 and then nothing could contrast with real Madrid 1-4. The day before, Valencia scored against Balear in the Copa del Rey already in the first minute. The most surprising thing is that this ball is still the only one.
3:55 PM4 months ago

Julen Lopetegui and Augustinsson are both indisposed. The rapid antigen detection tests carried out on both have not yet shown positive results. Pablo Sanz will coach Sevilla at the Mestalla.
3:45 PM4 months ago

ARE ALREADY IN THE STADIUM

The Andalusian Club is already at the Mestalla facilities, ready for their match against Valencia.

THIS IS HOW SEVILLA GOES OUT

These are the eleven men that Lopetegui sends out looking to get the win at the Mestalla Stadium. 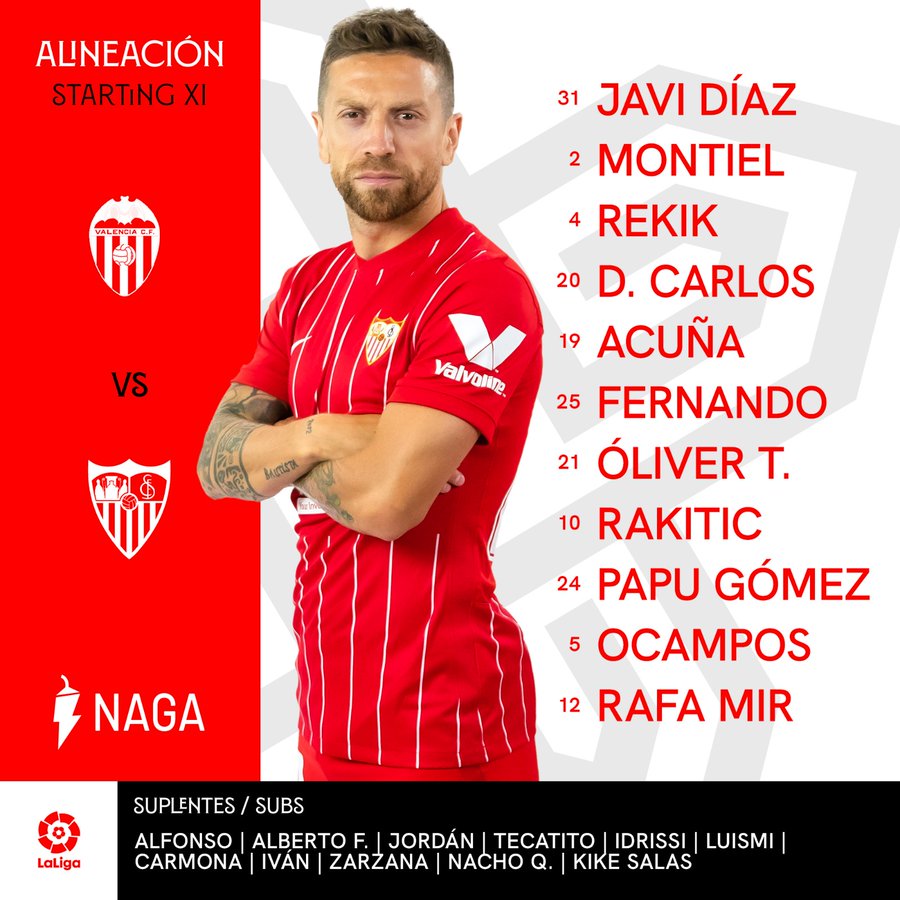 AWAY GAMES AND RECENT RESULTS

In the stretch of 34 away matches, Sevilla has the advantage, with 17 wins with 11 defeats and six draws. This season they have already beaten Valencia. Moreover, the Andalusians solved all the problems already halfway through the first half, scoring three goals: 3-1.
3:25 PM4 months ago

The wait is over in Sevilla, the Andalusian team returns to LaLiga action against Valencia. Both clubs are having a great season, with the visitors being the team that has surprised the most in the championship as they have not let go of the overall sub leadership of the competition. On the other hand, Valencia will be looking to surprise and beat Lopetegui's pupils at home and surrounded by their people.
3:20 PM4 months ago

Do not miss a detail of the match with the live updates and commentaries of VAVEL. Follow along with us all the details, commentaries, analysis and lineups for this Valencia vs Sevilla match.
3:15 PM4 months ago

What time is Valencia vs Sevilla match for LaLiga?

This is the start time of the game Valencia vs Sevilla of 19th January in several countries:

Watch out for this Sevilla player:

Currently, the Brazilian Diego Carlos is a standard bearer in the Andalusian club and is a very important piece in all the matches raised by Lopetegui, Diego Carlos adds in this season a total of 1,710 minutes of action that are divided into 19 games played, 2 goals, 1 yellow card and 1 red card. Due to his great quality, several European teams are looking for him, however, Sevilla is fortunate to have him and make a real defensive wall with him, so he will be the player to follow for this duel. 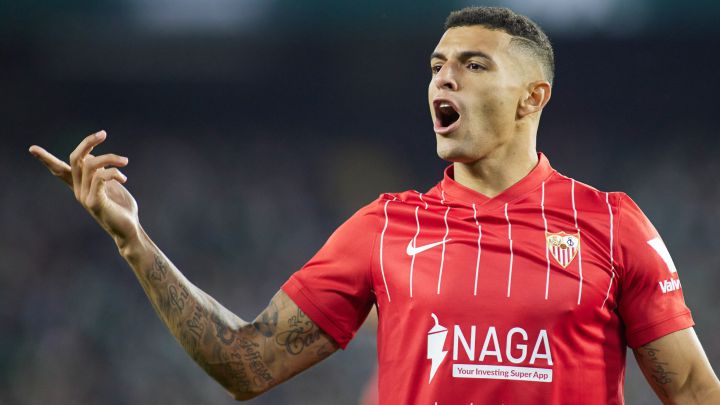 Watch out for this Valencia player:

One of the most fundamental players in the Valencia squad, Portugal star Goncalo Guedees will be the player to watch for this match. The Lusitanian adds up so far this season a total of 1546 minutes that are divided into 20 games played, 7 goals and 5 assists in the current campaign, also, he averages a total of 2 yellow cards and in most of the matches he has been used as a midfielder or center forward. Goncalo Guedes can change the landscape of the match in a minute and tip the balance in favor of his team. 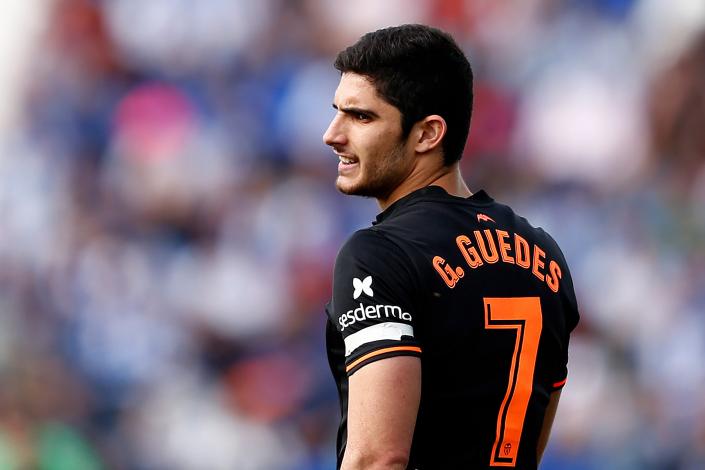 Mestalla Stadium or Mestalla, Camp del València is a soccer stadium owned by Valencia Club de Fútbol, S.A.D. located in the Mestalla district of the city of Valencia (Spain), between Avenida de Suecia and Avenida de Aragón.
Inaugurated on May 20, 1923, it owes its name to the historic Mestalla irrigation channel, which passed next to the south stand of the stadium. Between 1969 and 1994 it was called the Luis Casanova Stadium in honor of Luis Casanova Giner, considered one of the best presidents in the history of the club and promoter of the major transformation of the stadium in the 1950s.

The stadium currently has a capacity for 48,600 spectators, although its total capacity amounts to 49,430 spectators including the part removed from the total for safety reasons. Since its early years, it has hosted a total of 31 international matches of the Spanish national soccer team (including the 1982 World Cup finals in Spain), plus 5 matches of the Spanish Olympic team during the 1992 Olympic Games, and has hosted 10 finals of the Copa del Rey.

Valencia and Sevilla have faced each other a total of 178 times (79 wins for Valencia, 32 draws and 67 wins for Sevilla) where the scales are tipped by a slight difference in favor of the Valencia side. Similarly, it is the Valencia team who have the advantage in goals scored as the balance is in their favor with 282 goals while the visitors have 242. Their last meeting dates back to matchday 6 of the 2021-22 season where Sevilla won by a score of 3-1 over Valencia at the Sanchez Pizjuan Stadium.
2:40 PM4 months ago

To lift the face

For their part, Sevilla soccer club has been doing a spectacular campaign in LaLiga as they are second in the overall table with 44 points and still have several hopes of recovering the situation and snatching the title from the hands of Real Madrid, however, things outside of the domestic competition have been a bit complicated as last month they lost in the UEFA Champions League and ended up dropping to the Europa League and last weekend, they could not get away with it at the Benito Villamarín losing 2-1 to their hated rivals, Real Betis. With spirits to lift, Sevilla will be looking to pick up three more points at the Estadio Mestalla and raise the spirits within the Andalusian side once again.
2:35 PM4 months ago

The Ches are currently in the 10th position of LaLiga with 28 points that have been the product of 7 wins, 7 draws and 6 defeats, also, they have 32 goals for and 32 goals against, a situation that leaves them with a lot of balance offensively and defensively speaking. In the last matchday, Valencia lost in a resounding way against the leader of the competition, Real Madrid, by a thunderous score of 4-1, however, the Ches have not been able to get out of the bad streak since two matchdays ago they lost in the same way, but this time it was against Espanyol at home, so Valencia will be forced to get the three points this time against Sevilla if they do not want to end up stringing three defeats in La Liga.
2:30 PM4 months ago

Looking to continue climbing up the table

The twenty-first date of LaLiga brings us an even duel when Valencia faces Sevilla at the Mestalla Stadium, both teams are having a great season with the locals in mid-table and the visitors in UEFA Champions League positions, however, this does not mean that they can be confident because a defeat or a victory could strip them of the precious place they occupy at the moment. Currently, Valencia is in 10th position with 28 points, while Sevilla is in 2nd place in the table, only 5 points behind the overall leader, Real Madrid. This match will be very important for both teams as a victory could move them up many positions in the championship.
2:25 PM4 months ago

The Valencia vs Sevilla match will be played at the Estalla Stadium, in Valencia, Spain. The kick-off is scheduled at 15:30 pm ET.
2:20 PM4 months ago

Welcome to VAVEL.com’s LIVE coverage of the 2021 LaLiga: Valencia vs Sevilla!

Charlotte FC vs Vancouver Whitecaps preview: How to watch, team news, predicted lineups, kickoff time and ones to watch 20 hours ago
//