Thank you (very much) for listening to this latest Serie A match here on VAVEL. Have a good night and see you next time!
5:37 PM4 months ago

To you who followed the game until the end: you are my idol, as it ends one of the most sleepy games of the Serie A! Goalless Lazio and Atalanta take home a point each!

Yellow for Toloi, for holding Lazzari in the midfield. And Atalanta has a double substitution: Piccoli and Pessina left for De Nipoti and Sidibe.
5:23 PM4 months ago

Substitution in Lazio: Luis Alberto left and Basic came in.
5:21 PM4 months ago

Luis Alberto tried to get a shot off, but Musso could not get it.
5:17 PM4 months ago

Marusic hit hard from outside the area and sent it close to the left angle, dangerously!
5:14 PM4 months ago

Substitution in Atalanta: Miranchuk left and Rafael Tolói came in.
5:13 PM4 months ago

Substitution in Lazio: Hysaj is out and Lazzari is in.
5:12 PM4 months ago

Miranchuk, now inside the box, hit a placed shot to the right corner, and Strakosha had it!
5:09 PM4 months ago

Miranchuk hit a hard shot from outside the box and sent it through the right side of the goal.
5:07 PM4 months ago

Zaccagni received a cross from the right, took hold of the ball, and filled his foot, but it struck Musso's right post!
5:05 PM4 months ago

Marusic lifted the ball into the box and Immobile managed to head the ball away, but it went over the goal.
4:54 PM4 months ago

Pessina hit hard from outside the area, but in the hands of Strakosha.
4:48 PM4 months ago

Piccoli gets his first touch on the ball and it rolls into the second half of the match!
4:48 PM4 months ago

The teams reappear on the field to start the second half of the match. Both teams are unchanged.

Without extra time, the first half of a sleepy first half ends.
4:27 PM4 months ago

Milinkovic-Savic tried his shot from outside the area and sent it over the goal.
4:27 PM4 months ago

Yellow card to Zappacosta, for a foul on Zaccagni in the Lazio backfield.
4:20 PM4 months ago

Yellow card to Pezzella for a foul on Hysaj on the right.
4:09 PM4 months ago

Luis Alberto, in a free-kick from a distance, sent it through the right side of the goal, but without danger.
3:58 PM4 months ago

The game starts and remains tense, with few approaches to the area by both teams.
3:47 PM4 months ago

Immobile makes the first touch on the ball and it rolls into the first half of the match!
3:45 PM4 months ago

The teams are on the field to start the match!
3:27 PM4 months ago

Serie A round 23 started yesterday with two matches. The first was Verona's 2-1 win over Bologna and Genoa drew 0-0 with Udinese. Earlier today Inter beat Venezia 2-1.

Atalanta are lined up and will take the field with:

Lazio is scheduled and will take the field with:

The broadcast of the Serie A match between Lazio and Atalanta now begins!

Do not miss a detail of the match with the live updates and commentaries of VAVEL. Follow along with us all the details, commentaries, analysis and lineups for this Lazio vs Atalanta match.
2:45 PM4 months ago

How to watch Lazio vs AtalantaLive in TV and Stream

If you want to watch the game Lazio vs Atalanta live on TV, your options is: none.

What time is Lazio vs Atalanta match for Série A?

This is the start time of the game Lazio vs Atalanta in several countries:

Simone Sozza will referee the match, with assistants Alberto Tegoni and Marco Trinchieri. Davide Massa will be in charge of VAR.
2:30 PM4 months ago

The probable Atalanta team for the match is: Musso, Djimsiti, Demiral and Palomino; Zappacosta, De Roon, Freuler and Pezzella; Pasalic, Pessina and Muriel.
2:25 PM4 months ago 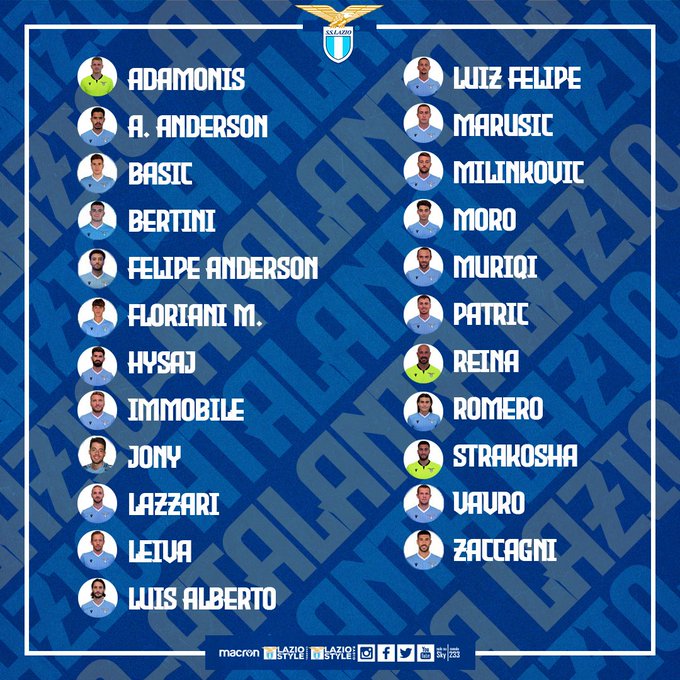 Sarri does not know if he will have Pedro, Radu, and Basic and Zaccagni, both in injury doubt, in addition to Acerbi, suspended, Akpo, with Ivory Coast at the Africa Cup of Nations, and Cataldi, injured. Gasperini, meanwhile, will be without Zapata and Gosens, both injured, along with Ilicic, Malinovskyi and Hateboer.
2:15 PM4 months ago

Atalanta are in fourth position with 42 points, four behind Napoli, six behind AC Milan and eight behind leaders Inter Milan, and one ahead of Juventus. Lazio, meanwhile, have 35 points, in eighth position, tied with Roma and Fiorentina, and six points behind Juventus and two ahead of Verona.
2:10 PM4 months ago

Lazio are coming off two wins in their last two games. On Saturday (15), Lazio beat Salernitana 3-0 away from home in Serie A, with goals from Immobile (2) and Lazzari. And for the Coppa Italia, on Tuesday (18), the victory was over Udinese, 1-0, with Immobile's goal.
2:00 PM4 months ago

Welcome to VAVEL.com’s coverage of the 2021-22 match: Lazio vs Atalanta Live Score!