Thank you for listening to this Premier League match. Have a good afternoon and see you next time!

Chelsea return to the field on Saturday (5) for the FA Cup, when they face Plymouth Argyle. Tottenham play the same day, in the same competition, but against Brighton.
2:27 PM4 months ago

In the London Derby, Chelsea beat Tottenham once again and take all three points!
2:22 PM4 months ago

Tottenham's substitution: Winks out, Bryan Gil in.
2:18 PM4 months ago

Winks got the cross and Kane headed it hard, but Kepa deflected it into the left corner!
2:03 PM4 months ago

Chelsea substitution: Jorginho out, Kanté in.
1:59 PM4 months ago

Lukaku hit the ball high and hard, but Lloris sprawled away!
1:49 PM4 months ago

Bergwjin got the shot inside the box and sent the ball into Kepa's hands.
1:47 PM4 months ago

A free-kick came in from the left, Mount lifted the ball into the box and Thiago Silva rose higher than anyone to deflect it into the left corner, with no chance for Lloris, making the score even higher! After the goal Tottenham changed: Sessegnon and Tanganga left to Skipp and Lucas.
1:40 PM4 months ago

Ziyech, once again, had a strong shot from outside the area, but this time Lloris saved it!
1:38 PM4 months ago

Kovacic pulled the counterattack and found Ziyech in the middle. He took hold of the ball, set it up and hit it into the right corner of the net with no chance for Lloris to make a save, opening the scoring with a magnificent goal!
1:36 PM4 months ago

Lukaku makes his first touch on the ball and it rolls into the second half of the match.
1:36 PM4 months ago

The teams appear on the pitch to start the second half of the match.

No goals end the first half at Stamford Bridge for Chelsea and Tottenham!
1:12 PM4 months ago

Harry Kane received the ball inside the box from a cross from the left and hit the goal, but he himself fouled Thiago Silva and the goal was disallowed. And in the middle of all this mess, Jorginho got a yellow card.
1:07 PM4 months ago

Yellow for Tanganga, for leaving his arm on his opponent in a counterattack.
12:54 PM4 months ago

Yellow for Thiago Silva, for stopping a Tottenham counter-attack.
12:43 PM4 months ago

Winks charged and hit hard, but into the hands of Kepa.
12:42 PM4 months ago

Ziyech charged from the right into the middle and hit hard, but Lloris palmed it away.
12:34 PM4 months ago

Now Mount crossed into the box and Hudson-Odoi managed to get the header, but sent it past the left side of the goal.
12:31 PM4 months ago

Down the right Mount crossed and Lukaku managed to finish, but over the goal.
12:30 PM4 months ago

Kane takes the first touch on the ball, after a protest against racism, now customary in the Premier League, to get the ball rolling for the London derby!
12:27 PM4 months ago

Earlier today Liverpool beat Crystal Palace 3-1 and there were two draws: Arsenal drew 0-0 at Burnley and Leicester drew 1-1 at Brighton.
12:08 PM4 months ago

Round 23 began on Friday with Norwich's 3-0 win over Watford. After that, yesterday, Aston Villa beat Everton 1-0 and Wolverhampton beat Brentford 2-1.
11:55 AM4 months ago

The players appear on the field to begin their warm-up work.
11:42 AM4 months ago

Tottenham is lined-up and comes to the field with: 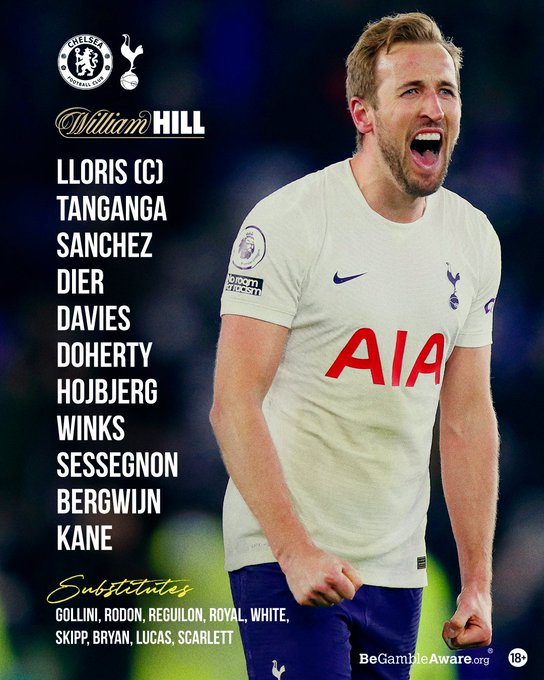 Chelsea is lined-up and comes to the field with: 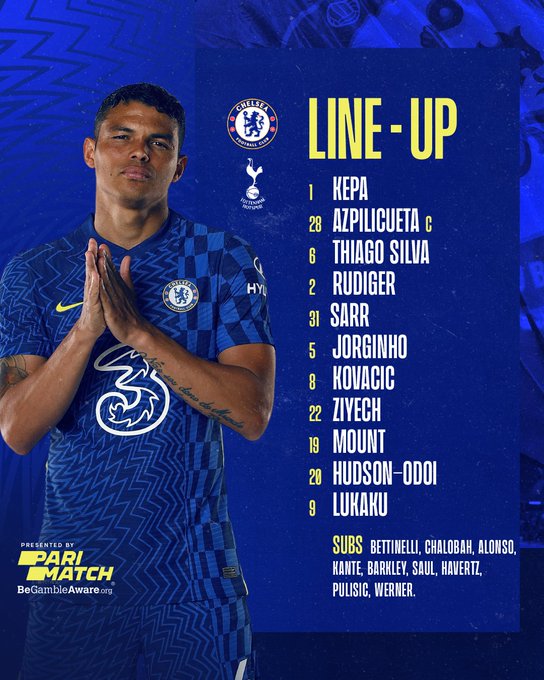 Now the broadcast of the Premier League match between Chelsea and Tottenham begins!

Do not miss a detail of the match with the live updates and commentaries of VAVEL. Follow along with us all the details, commentaries, analysis and lineups for this Chelsea vs Tottenham match.
11:22 AM4 months ago

How to watch Chelsea vs TottenhamLive in TV and Stream

f you want to watch the gameChelsea vs Tottenham live on TV, your options is: none.

If you want to directly stream it: Streaming services and Peacock, SiriusXM FC app.

What time is Chelsea vs Tottenham match for Premier League?

This is the start time of the game Chelsea vs Tottenham of 23th January 2022 in several countries:

Pauli Tierney will referee the match, with assistants Lee Betts and Constantine Hatzidakis.
11:07 AM4 months ago

The probable Tottenham for the match is: Lloris, Sanchez, Dier and Davies; Emerson, Skipp, Winks, Hojbjerg and Reguilón; Kane and Lucas.
11:02 AM4 months ago

The probable Chelsea team for the match is: Kepa, Sarr, Thiago Silva and Rudiger; Azpilicueta, Kanté, Kovacic and Marcos Alonso; Mount, Lukaku and Werner.
10:57 AM4 months ago

Tottenham comes from a defeat and a win in the last two games. The defeat was for the Carabao Cup, precisely for Chelsea, on Wednesday (12), 1-0, with Rudiger's goal.  The victory was last Wednesday (19), over Leicester, in the Premier League, by 3-2. Daka opened the scoring, Kane equalized and Maddison put the Foxes ahead, but Bergwijn scored twice in stoppage time and gave Tottenham the victory.
10:42 AM4 months ago

Chelsea is coming from two matches without a win in the last two games. On Saturday (15), the defeat was to Manchester City, 1-0, with a goal from De Bruyne. And on Tuesday (18) came the draw, now against Brighton, 1-1, with Ziyech opening the scoring and Webster equalizing, with both games being in the Premier League.
10:37 AM4 months ago