Thank you for watching today's match in VAVEL! see you another day!
5:57 PM4 months ago

The only goal of the match!

A game where Alaves had many more chances and played better than Barcelona, but Barca knew how to define one of their only chances of the game and took all three points.
5:51 PM4 months ago

A great corner kick from Alaves it is headed in, but Ter Stegen saves it!!
5:50 PM4 months ago

There is a red card!!

Change for both teams

Luis Rioja is out

Clement Lenglet is in

Finally, a goal in the match, a great ball from Jordi Alba, to Ferran who was alone, just passes it to Frenkie and he pushes it in!
5:42 PM4 months ago

A great cross from Jason Joselu heads it and it goes wide by nothing!!
5:29 PM4 months ago

Changes for both teams

Pere Pons is out

Miguel de la Fuente is in

Two players from Barcelona are warming up!

Martin Braithwaite and Nico Gonzalez might enter the pitch!
5:03 PM4 months ago

A very desertic match, only one chance, Barcelona has the posesion of the ball but they don't do anything, and Alaves are playing very brave aplying a lot of preasure on the Barcelona players. Let's hope for a better second half.
4:50 PM4 months ago

A great pass from Joselu, too Pere Pons and he shoots really bad, straight at Ter Stegen.
4:03 PM4 months ago

They have faced each other many times!

The 22-year-old Uruguayan centre-back is back in the starting lineup after having hand surgery (a fracture of the second and third metacarpal bones.) The warrior is ready to start again.
3:43 PM4 months ago

The 34 year old spanish midfielder is a really important player for Alavés he has played 16 matches out of the 21, but he has been on the bench a lot, the manager decided to start him today!
3:34 PM4 months ago

Alaves only have two injured players!

Barcelona have many injured players!

Barcelona can go up in the table!

Barcelona could have an easy match tomorrow against Alavés. The problem is that the game is not in Camp Nou and Barcelona have only won twice when they are not in their stadium. They need the win desperatley, because if they don't win and Rayo Vallecano win, Barcelona could go down to 8th place, but if they win they can go up to 5th place and only 1 point behind Atletico de Madrid. Can Barcelona go up in the table?
2:38 AM4 months ago

Tune in here Alaves vs Barcelona

In a few moments we will share live the starting eleven of Alaves vs Barcelona as well as recent information of the Mendizorroza. Do not lose detail of the game with the minute by minute in VAVEL.
2:33 AM4 months ago

The new addition to Barcelona, he was recently bought for 55 million euros and seems to be getting used to Barcelona. Although he has only played one game, and it was in the Copa del Rey, he scored a great goal and besides, he already knows the league, he played for Valencia a few years ago. Will he be able to do a good job tomorrow?

Player to watch from Alaves: Joselu

The 31 year old spanish striker is having a great season for Alaves right now. Even though Alaves are not in a great position, he has scored many goals: 10 goals and 2 assists in 21 matches, and Alaves has scored 16 goals in total! he's scored more than 50 percent of the goals. Will he do good against Barcelona tomorrow? 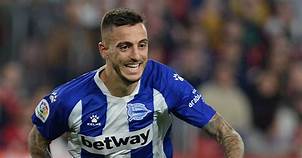 Times to watch the match

When and where to watch Alaves vs Barcelona.

The game will be broadcast on ESPN and STAR +, but if you want to watch it live and online, VAVEL is your best option.
2:03 AM4 months ago

Barcelona come from a draw!

Right now Barcelona are having a really bad season, simply because they are not performing as well as they should, because they have the players and a great manager that has experience playing at Barcelona. The team is giving away a lot of spaces for other teams to score, and Barcelona don't finish their oportunities. Last match was looking as it was going to be a win, they were 0-1, but in the 89th minute they conceded a goal and Granada rescued a point. Can Barcelona win tomorrow?
1:58 AM4 months ago

Alaves come from a bad defeat!

Alaves right now are in a bad spot in the league, they are in 19th place with 17 points, and if they win tomorrow they could have the posibilty of getting out of relegation zone and placing in 17th place, but it is depending of other results. Last matchday Alaves played a really strong Betis, and they lost 4-0 thanks to two goals from Borja Iglesias, one goal from Juanmi and one goal from Sergio Canales. Could they win tomorrow against a strugguling Barcelona?
1:53 AM4 months ago

The Mendizorroza stadium located in Vitoria; Spain will be the stadium that will house the match between Alavés and Barcelona corresponding to matchday 22 of LaLiga. This stadium has space for 20,000 people.
1:48 AM4 months ago
1:43 AM4 months ago

Welcome to the transmission of the Alaves vs Barcelona match corresponding to the 22nd  matchday of the LaLiga. The venue of the match will be at the Mendizorroza at 2:00 p.m.