Thank you for following this match on VAVEL USA. Until the next time!
10:33 PM4 months ago

The referee adds five more minutes to the match.
10:04 PM4 months ago

Chile missed the ball after Brereton's cross, but Molina brushed the ball aside to keep out Benjamin's shot.
10:00 PM4 months ago

Chile came close to scoring with Erick Pulgar's shot, but Nicolás Otamendi was alert to deny!
9:57 PM4 months ago

The medical assistants come in to attend to Papu Gómez.
9:45 PM4 months ago

Argentina: Nico González and Rodrigo de Paul are out; Marcos Acuña and Lo Celso are in.
9:44 PM4 months ago

We passed the hour mark and Chile still couldn't get past the midfield and hurt the Albiceleste defense.
9:35 PM4 months ago

Chile: Marcelino Nuñez and Paulo Díaz are out; Joaquin Montesinos and Mauricio Isla are in.
9:33 PM4 months ago

Gabriel Suazo got in the way of Leandro Paredes' shot and saved his goal.
9:31 PM4 months ago

Marcelino Núñez shoots at goal, but the shot goes wide.
9:28 PM4 months ago

Chile: Sebastián Vegas is out and Gabriel Suazo is in.
9:20 PM4 months ago

The referee adds two minutes to the first half.
9:02 PM4 months ago

MARTINEZ! The goalkeeper deflects for a corner kick after a powerful shot by Paulo Díaz from outside the area.
9:01 PM4 months ago

Papu Gómez's shot was aimed at the far post, but Cortés made a clean save.
8:56 PM4 months ago

SANCHEZ! Alexis' shot from outside the area passes very close to Martínez's goal.
8:52 PM4 months ago

Chile: Claudio Bravo leaves due to an apparent injury and Brayan Cortés enters.
8:52 PM4 months ago

We reached the half-hour mark and after the equalizer, Chile had more chances at the opponent's goal.
8:42 PM4 months ago

Di María's shot ends up in the hands of Claudio Bravo.
8:38 PM4 months ago

In the first fifteen minutes of the match, the visitors were slightly better than the Chileans.
8:32 PM4 months ago

Nico Gonzalez started to get into the box to take a shot, but the defense got in the way and the danger was lost.
8:26 PM4 months ago

CHILE IS CLOSER! A free kick from the Chileans looking for the head of Edu Vergas to finish, but the ball goes dangerously wide.
8:16 PM4 months ago 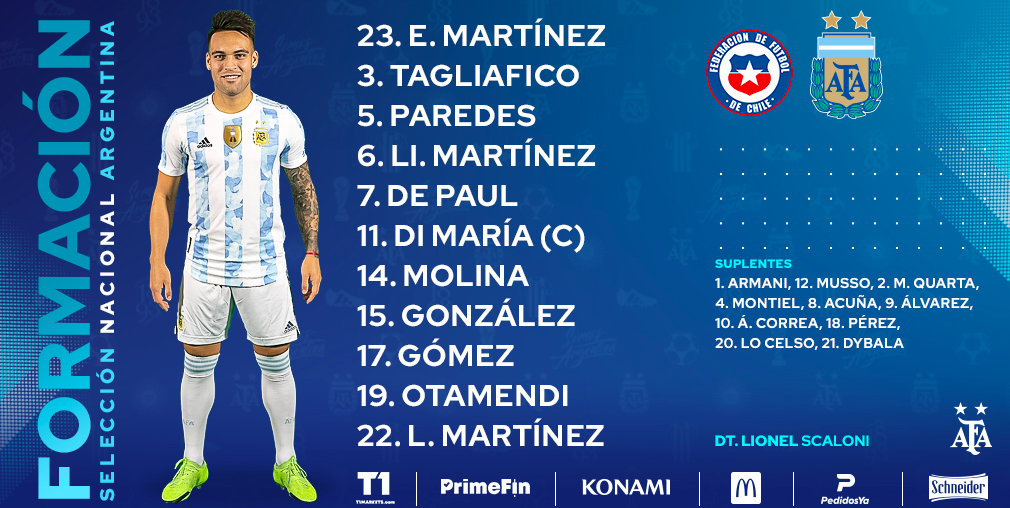 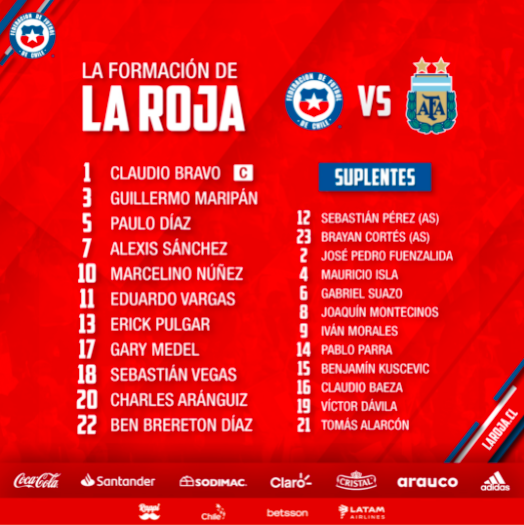 On the other hand, Chile will have the absence of Arturo Vidal, who was sent off in the last match against Bolivia. At the last minute, he will be joined by Jean Meneses, who tested positive for COVID-19, as well as Mauricio Isla and Francisco Sierralta.
7:56 PM4 months ago

For this match, Scaloni will have several absences, most notably that of captain Lionel Messi. He will be joined by Cristian Romero, Joaquín Correa, Juan Foyth, Nicolás Domínguez and Exequiel Palacios, the latter four due to injuries.
7:51 PM4 months ago

Both Chile and Argentina have faced each other on several occasions, and the scales are tipped in favor of the Albiceleste. The official record shows 88 matches between the two teams, where the Argentine team has won 57 times and has only won 6 times. There have been 25 draws. In their most recent meeting in this qualifying round, both teams ended in a one-goal draw with goals from Lionel Messi and Alexis Sánchez.
7:46 PM4 months ago

Argentina's national team has a 27-match unbeaten streak. Its last match lost was in the semifinals of the 2019 Copa America against the Brazilian national team.
7:41 PM4 months ago

With the respective hygiene measures in place, both Chile and Argentina have just arrived at the Zorros del Desierto Stadium for this afternoon's match at 19:15 hrs ET. 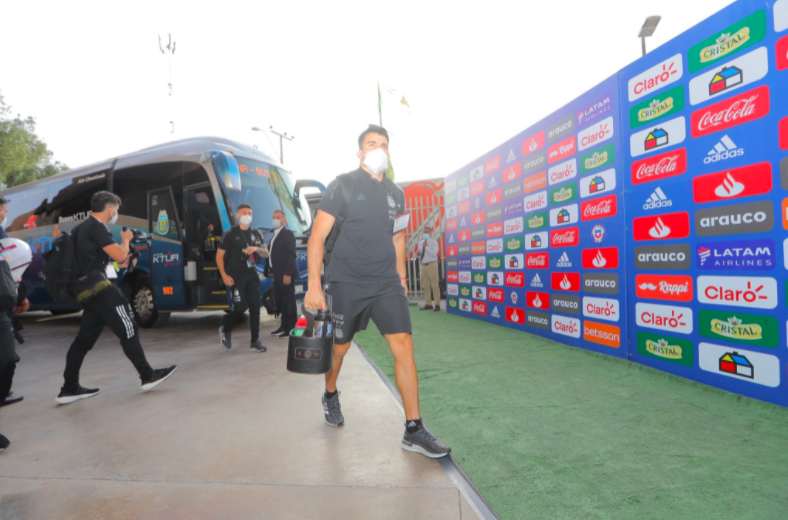 This will be the first time that Chile will play in the qualifiers outside Santiago and particularly in the altitude of Calama.
7:31 PM4 months ago

At the moment and pending Peru's game this matchday, the Peruvians are in fifth place with 17 points and, momentarily, would qualify for the playoffs, while teams such as Chile and Uruguay are eliminated with four rounds remaining with 16 points in the CONMEBOL qualification table.
7:26 PM4 months ago

The Zorros del Desierto de Calama Stadium, also known as 'El Infierno' is a soccer stadium located in Calama, Chile. It is a small stadium with a capacity of just over 12 thousand spectators. It is mainly occupied by the Cobreloa Club, and it is the first time it hosts the Chilean National Soccer Team in these World Cup qualifiers. 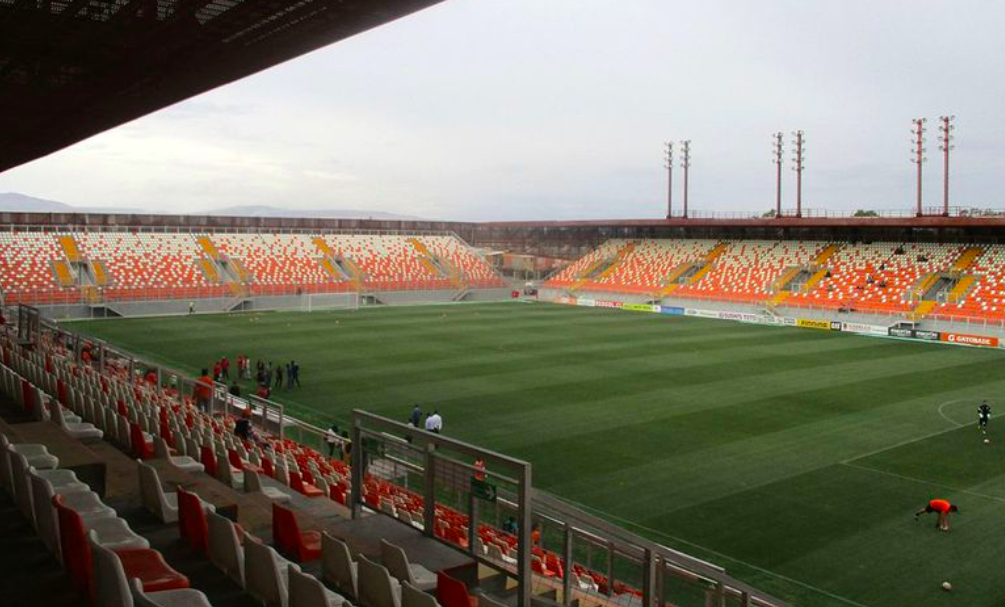 CONMEBOL qualifiers has started again! We are one hour away from the start of the match between Chile and Argentina at the Zorros del Desierto Stadium. The visitors already have their ticket to Qatar 2022 in hand, however, the Chileans need to take advantage of their locale and the previous results of the other teams in contention in order to move up the standings. Will the locals manage to win? Follow our coverage on VAVEL USA.
7:16 PM4 months ago

Do not miss a detail of the match Chile - Argentina with the live updates and commentaries of VAVEL. Follow along with us all the details, commentaries, analysis and lineups for this match.
7:11 PM4 months ago

How to watch Chile - Argentina Live Stream on TV and Online?

If you want to watch the game Chile vs Argentina live on TV, your options are: Fubo Sports Network

If you want to directly stream it: Fubo Sports App

Lautaro Martinez | This Argentinean striker has scored in the World Cup qualifiers and did so in his most recent match against Peru. Argentina will not have Messi available so Lautaro will have to carry the baton in the Albiceleste offense. 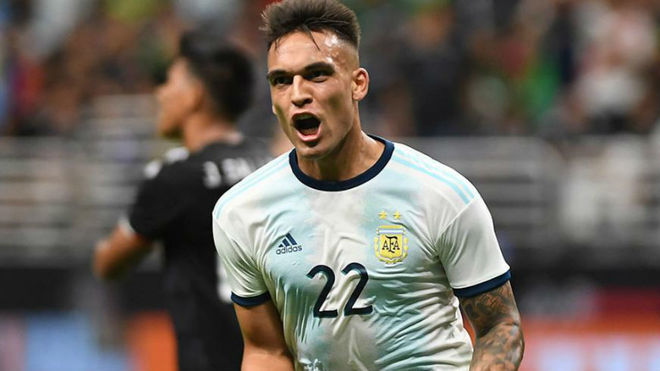 Jean Meneses, forward | The absence of Arturo Vidal due to an expulsion in the last match may weigh on the Chilean national team, and Meneses is a player who can assist and score. Together with Alexis Sanchez, they can pose a threat to the Argentinean defense.
6:56 PM4 months ago

Argentina: Qualified to the World Cup

On the other hand, the Argentine national team coached by Lionel Scaloni already has its selection of players concentrated for the match against Chile and Colombia. The albiceleste is more than calm since with their most recent draw against Brazil, they have secured their ticket to the World Cup in Qatar. Argentina is undefeated in these qualifiers, so they will be a tough opponent to beat. They are currently in second place in the table with 29 points, two points behind the leader, Brazil, after eight wins and five draws.
6:36 PM4 months ago

La Roja did not start the qualifiers for Qatar in the best way and as a consequence, the dismissal of Reinaldo Rueda as coach was imminent. Now, Martin Lasarte faces his first task as coach of the Chilean national team and that is to qualify for the World Cup.  The Chileans are in sixth place in the table with 16 points after four wins, four ties and six defeats. Chile is coming from a win against El Salvador in a friendly match played in December; in the qualifying round, their most recent match was against Ecuador where they lost by a score of 0-2 at home.
6:31 PM4 months ago

The qualifiers for the World Cup in Qatar begin! Tonight, the Chilean National Team will host one of CONMEBOL's favorite teams: the Argentine National Team, which already has its ticket for the World Cup to be played in November of this year. This match is of utmost importance for the Chileans, who will have to take advantage of their home advantage.
6:26 PM4 months ago

The match will be played at the Stadium Zorros del Desierto

The Chile vs Argentina match will be played at the Zorros del Desierto Stadium, in Calama, Chile. The kick-off is scheduled at 19:15 pm ET.
6:21 PM4 months ago