Thank you for following the Paraguay-Uruguay game of the South American qualifiers for the Qatar 2022 World Cup.
9:00 PM4 months ago

Gustavo Gómez, for a double yellow card, leaves the Albirroja with one less player.
8:50 PM4 months ago

Cavani's backheel and the ball goes into the goalkeeper's hands.
8:35 PM4 months ago

Junior Alonso of Paraguay has been cautioned.
8:30 PM4 months ago

Betancur and Godín come out

Benitez's shot from outside the area into the goalkeeper's hands.
8:20 PM4 months ago

Olivera did not take advantage of the goalkeeper's rebound and ended up flying it in an unbelievable way.
8:10 PM4 months ago

Pellistri and Núñez come out

Escobar and Rojas come out

A cross to the far post was controlled by Sergio Rochet, but he was left lying on the field.
7:45 PM4 months ago

Luis Suárez with a cross-shot to kiss the net and open the score 1-0.

Uruguay took control of the game in the first few minutes, but still without any clear options.
7:35 PM4 months ago

The second half begins between Paraguay and Uruguay.
7:30 PM4 months ago

Paraguay's free kick service falls short at the near post and is blocked by the defense.
7:20 PM4 months ago

The service is too long for the run that Luis Suárez was trying to make.
7:05 PM4 months ago

Araujo does not get a shot off because of a defensive cutback. There will be a corner kick for Uruguay.
7:00 PM4 months ago

Godín combs the ball to the near post and hits the crossbar, while Suárez, on the rebound, could not push it in.
6:55 PM4 months ago

Facundo Pellistri of Uruguay is cautioned.
6:50 PM4 months ago

Godín's header from a corner kick is saved by Silva and sent wide.
6:40 PM4 months ago

Rodrigo Betancur has been cautioned, for Uruguay.
6:35 PM4 months ago

A cross to the far post is headed by Gonzalez and goes wide.
6:30 PM4 months ago

Neighbor with too long a service that reaches the goalkeeper.
6:25 PM4 months ago

The albirroja dominated the first few minutes, but so far there has been no dangerous play.
6:20 PM4 months ago

The match between Paraguay and Uruguay kicks off.
6:15 PM4 months ago

We are minutes away from the start of the game between Paraguay and Uruguay from Asunción.
6:10 PM4 months ago

The Paraguayan national team is finishing its warm-up phase prior to the start of this match:

This is how the albirroja arrived

This was Paraguay's journey to arrive at the stadium, where there was a good atmosphere and support from the fans to get the victory:

This is how the stands of the 𝗚𝗲𝗻𝗲𝗿𝗮𝗹 𝗣𝗮𝗯𝗹𝗼 𝗥𝗼𝗷𝗮𝘀 stadium look like, where a good entry is expected to support Paraguay, although there will also be Uruguay fans. 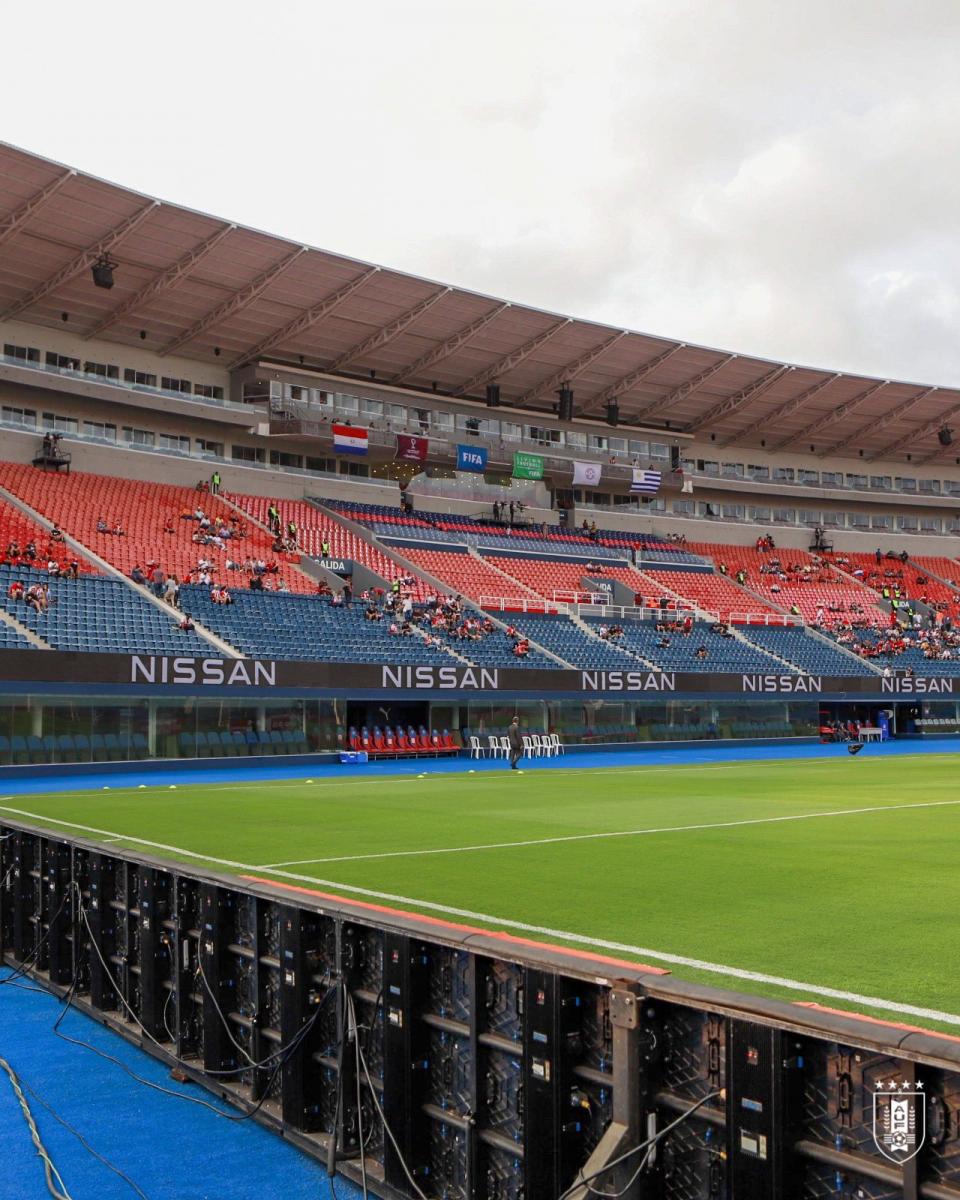 How does Uruguay arrive?

The Garra Charrúa has only one win in the last six games, but what is most worrying has been the lack of goals, where they have only been able to score two goals, so one of the men who could make his debut would be Nicolás López, a Tigres player who was scoring champion in Liga MX last semester.
5:30 PM4 months ago

How does Paraguay arrive?

Paraguay arrives in a bad moment, second last in the general table with 13 points and with only one victory in the last 7 games, which has put its qualification for the playoffs in jeopardy.
5:25 PM4 months ago

Transcendental match this Thursday in Asuncion where Paraguay and Uruguay have no choice but to win or win if they want to have aspirations for the Qatar 2022 World Cup. We begin with VAVEL's coverage of the game.
5:20 PM4 months ago

Do not miss a detail of the match with the live updates and commentaries of VAVEL. Follow along with us all the details, commentaries, analysis and lineups for this Paraguay vs Uruguay match for the 2022 World Cup Qualifiers in South American qualifiers.
5:15 PM4 months ago

What time is Paraguay vs Uruguay match for 2022 World Cup Qualifiers?

This is the start time of the game Paraguay vs Uruguay of 27th January in several countries:

Uruguay has taken the measure of the albirroja national team in recent matches, having won three times and drawn twice between Copa América and qualifiers, and their most recent defeat was in 2007.

It has not been a good start to the year for Luis Suarez, but his experience and eye for goal at any time could appear, remembering that he is a player who at any moment could change the history of the match.
5:00 PM4 months ago

Antony Silva was fundamental to rescue a point in the last visit they had against Colombia, besides he has started with the right foot with La Franja de Puebla in the beginning of Liga MX, so the Paraguayan goalkeeper will be the player to watch for this match.
4:55 PM4 months ago

After the end of Óscar Washington Tabárez's era, Diego Alonso, former coach of Pachuca and Monterrey in Liga MX, has arrived as the savior to try to get the charrúa to the World Cup, after five games without a win, including four consecutive defeats.
4:40 PM4 months ago

Of all the teams that still have a chance, Paraguay is the most complicated and, to begin with, it will have to make its home advantage count in order to get three points that will bring it closer to the fight, especially since it has five games without a win.
4:35 PM4 months ago

How is the qualification process going?

With Brazil and Argentina already qualified and at the top of the general table, in addition to Ecuador, which is just a few points away from qualifying, there are two tickets available for six teams, including Paraguay, second to last in the qualification with 13 points, and Uruguay, position 7 with 16 points.
4:30 PM4 months ago

The Paraguay vs Uruguay match will be played at the General Pablo Rojas Stadium, in Asuncion, Paraguay. The kick-off is scheduled at 6:00 pm ET.
4:25 PM4 months ago

Welcome to VAVEL.com’s LIVE coverage of the 2022 World Cup Qualifiers: Paraguay vs Uruguay!