I would like to thank you here for your audience in this game. Stay tuned here for the repercussions of this game, and also for Saturday's live-stream World Cup weather. Have a good afternoon, and see you next time!
2:28 PM3 months ago

The grand final will be on Saturday (12), at 12:30 pm. Palmeiras is already there and awaits either Chelsea or Al-Hilal, who play tomorrow. The third place match, where Al Ahly will be, will be at 9am on the same Saturday.
2:26 PM3 months ago

With goals from Dudu and Veiga, Palmeiras is in the final of the FIFA Club World Cup!

Afshar received the ball on the right and hit it hard, but Weverton kept it out. The play continued and there was a strong header in the confusion, but it exploded off the crossbar!
2:20 PM3 months ago

Yellow for Afsha, for a hard tackle on Jailson in midfield.
2:19 PM3 months ago

And we will have six more minutes of extra time in the match.
2:17 PM3 months ago

Scarpa took the corner and the defense took it in two steps.
2:15 PM3 months ago

Rony received on the left and tried a cross, winning a corner.
2:13 PM3 months ago

Substitution in Palmeiras: Zé Rafael out, Atuesta in.
2:11 PM3 months ago

The play worked by Wesley on the left had a pass to the middle, where Marcos Rocha arrived kicking and sent it over the goal!
2:11 PM3 months ago

Scarpa lifted the ball into the box and the defense took it to the side. Possession of Palmeiras.
2:10 PM3 months ago

Ashraf came in with a cart from behind on Rony, on a violent entry on the right and fouled him, getting yellow. Then the VAR called, the referee reviewed the play and sent off the Al Ahly defender!
2:06 PM3 months ago

The ball was lifted by Afsha in the box and went straight out for a goal kick. And Palmeiras changes: Dudu and Veiga left for Wesley and Jailson.
2:05 PM3 months ago

Zé Rafael, in the midfield, knocked down Fathy and gave Al Ahly a free-kick to raise in the area.
2:02 PM3 months ago

Substitution in Al Ahly: Taher is out and Soliman is in.
2:01 PM3 months ago

Magdy hit the ball from outside the area and Weverton went to the ball and spread it very badly, leaving it for Sherif to hit the empty goal, but Sherif was offside and the goal was disallowed.
1:57 PM3 months ago

Ashraf lifted the ball into the box and had a deflection of Fathy's head, but the ball went over the goal.
1:51 PM3 months ago

Dudu hit a hard shot from the edge of the box and the ball went into Lofty's hands.
1:49 PM3 months ago

Maaloul took the open corner, outside the area, for a strong shot that deflected and went into Weverton's hands.
1:49 PM3 months ago

Fathy hit it hard from outside the area, with a deflection, for a corner.
1:45 PM3 months ago

In a lift in the area there was a header, but in the hands of Weverton.
1:43 PM3 months ago

Maaloul took the free-kick and sent it over the goal, without danger.
1:39 PM3 months ago

On the edge of the box Marcos Rocha brought down Taher, giving Al Ahly a dangerous free-kick.
1:38 PM3 months ago

Veiga left it to Dudu with his heel on the right, who took off on his own and filled his foot when he invaded the area, crossed, to beat Lofty and increase the score!

El Shahat hit from the left, from a distance, and sent it into Weverton's hands.
1:34 PM3 months ago

Rony gets the first touch on the ball and it rolls into the second half!
1:33 PM3 months ago

The teams return to the field to start the second half. Both teams come without changes.
1:18 PM3 months ago

El Soulia hit the ball from the edge of the box, but finished badly and sent it into Weverton's hands.
1:15 PM3 months ago

We will have two more minutes of extra time in the match.
1:13 PM3 months ago

El Shahat took a long shot and sent it over the goal.
1:10 PM3 months ago

Dudu took the ball again and found Raphael Veiga in the middle, who hit it into the right corner, opening the score!

The corner was taken quickly and the defense took it. In the rebound Piquerez shot hard and stamped the defense.
1:02 PM3 months ago

Scarpa took the corner and Maaloul took it away.
12:50 PM3 months ago

Piquerez crossed in the area and Brahim deflected it for a corner.
12:47 PM3 months ago

Maaloul took the corner and the defense took it away.
12:47 PM3 months ago

Dieng took off and hit a shot on goal, but sent it into the corner, after it had deflected off Gómez.
12:44 PM3 months ago

Scarpa crossed the ball into the box and Veiga headed the ball away, but into the hands of Lofty.
12:35 PM3 months ago

El Sahat took the ball into the box, there was a deflection and the ball went straight to the goal kick.
12:34 PM3 months ago

Taher received in the middle and was brought down by Luan. Weverton is in danger!
12:32 PM3 months ago

Dudu took a risk from a distance and sent it to the left side of the goal, without danger.
12:30 PM3 months ago

Taher makes the first touch on the ball and it rolls into the first half of this World Cup semifinal!
12:27 PM3 months ago

After all the protocols for entering the field, with the anthem of the competition, the players spread out on the field and start the game!
12:25 PM3 months ago

The teams take the field to start the match!
12:25 PM3 months ago

The players have already left the field and are finishing their preparation for the match in the locker rooms. 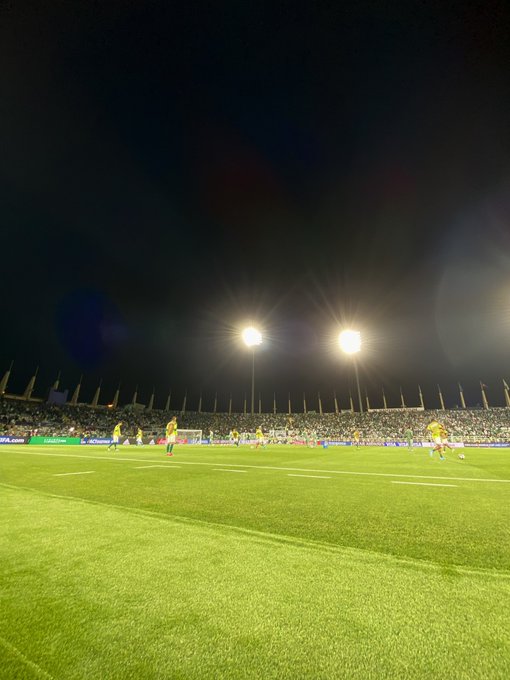 Al Ahly has already participated in several World Cups. Always ending up in the semis, the Egyptians have already fallen to Internacional in 2006, Corinthians in 2012 and Bayern Munich in 2020.
12:15 PM3 months ago

In the '99 World Cup, in another format, the alviverde faced Manchester United and was defeated 1-0, with a goal by Roy Keane. In another World Cup considered by many and contested by many, the "alviverde" (a Brazilian team) beat Juventus in the first round 1-0 and drew 2-2 in the second round, thus winning the controversial Rio Cup.
12:10 PM3 months ago

In this new format Palmeiras played the World Cup only once, last year, when they were eliminated in the semis by Tigres, who scored with Gignac and won 1-0. In the penalty shootout, the alviverde lost the third place game to Al Ahly.

In the other semi

The other semi-final match of the World Cup takes place tomorrow at 12:30PM, when Chelsea faces Al-Hilal. To reach this stage Al-Hilal faced Al-Jazira and won by 6-1 last Sunday (6), thus making the biggest score in the history of the competition. Al-Jazira opened the scoring with Diaby's goal, and then Al-Hilal turned it around with goals from Ighalo, Matheus Pereira, Kanno, Al-Dawsari, Marega and Carrillo.
12:00 PM3 months ago

Palmeiras' fans are already at the stadium and making a lot of noise in this pre-game!

#Palmeiras have been doing this for the past 30 minutes 😳 #ClubWC

Palmeiras has already faced Al Ahly once, precisely in the 2020 Club World Cup, when they lost on penalties after a 0-0 draw. Palmeiras has played 11 times against African teams, with seven wins, two draws, and two losses, scoring 24 goals and conceding 15.
11:50 AM3 months ago

The teams go up to start the warm-up for the match later on.
11:45 AM3 months ago

The news for the match on the part of Al Ahly are two players who were with the Egyptian national team at the weekend. In the defense enters Ayman Ashraf and in the attack enters Magdy, because in the middle stays El Solia.
11:40 AM3 months ago

Al Ahly are scheduled for the match later today and will take the field like this: 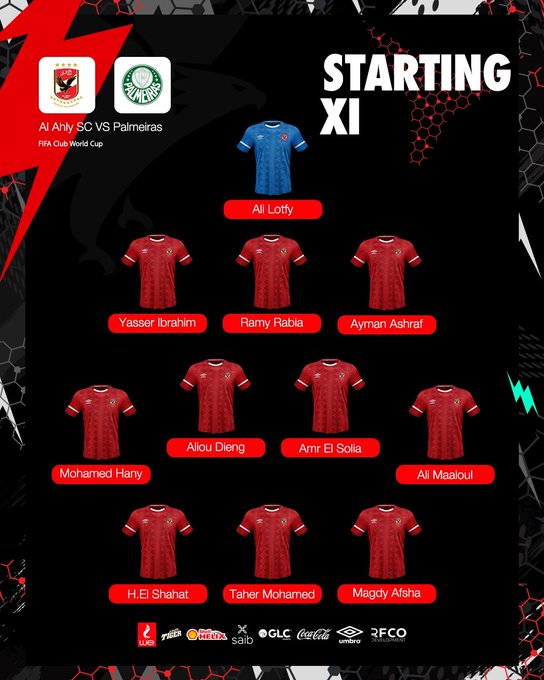 The novelty in Palmeiras is only one, with Piquerez entering in place of Murilo.
11:30 AM3 months ago

Palmeiras has been selected for tonight's match and will take the field like this: 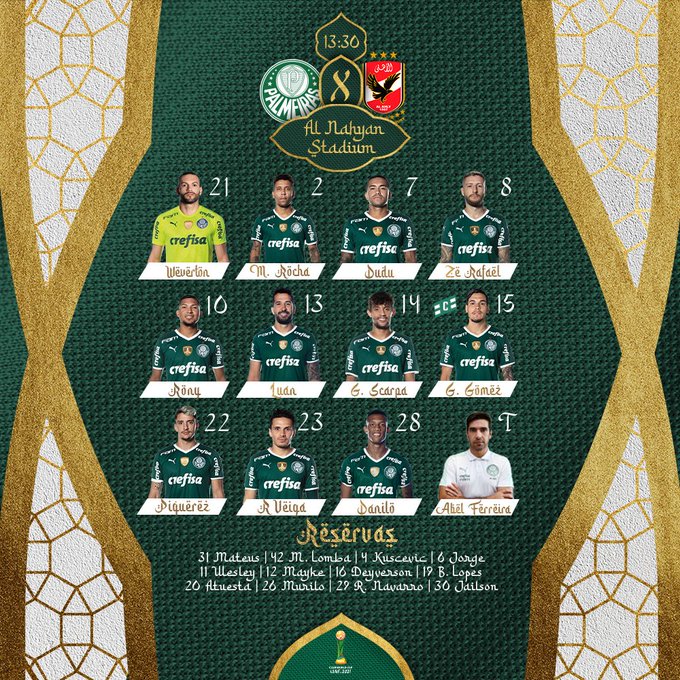 The broadcast of the match between Palmeiras and Al Ahly, valid for the semifinal of the FIFA Club World Cup 2021, begins in 1h!
11:20 AM3 months ago

Do not miss a detail of the match with the live updates and commentaries of VAVEL. Follow along with us all the details, commentaries, analysis and lineups for this Palmeiras vs Al Ahly match.
11:15 AM3 months ago

How to watch Palmeiras vs Al AhlyLive in TV and Stream

If you want to watch the game Palmeiras vs Al Ahly live on TV, your options is: Fox Sports 2.

What time is Palmeiras vs Al Ahly match for Club Word Cup?

This is the start time of the game Palmeiras vs Al Ahly of 8th February 2022 in several countries:

Coming straight from France, Clément Turpin will referee the match, with the assistants Nicolas Danos and Cyril Gringore, also French. Anton Shchetinn will be in charge of VAR.
11:00 AM3 months ago

With the doubts of the players who recently returned from the national team, the possible Al Ahly could be: Ali Loft, Rami Rabia, Yasser Ibrahim and Mihamed Maghrabi;Hany, Dieng, Magdy and Maaloul; Taher, El Shahat and Abdel Kader.
10:55 AM3 months ago

Without some boys from the base and with doubts in the defense because of the recent arrival of Piquerez, the possible Palmeiras is: Weverton, Luan, Gustavo Gómez and Murilo (Piquerez); Marcos Rocha (Mayke), Danilo, Zé Rafael and Gustavo Scarpa; Raphael Veiga, Dudu and Rony.
10:50 AM3 months ago

Pitso Mosimane will not have some players, which are Al-Shennawi, and Tawfik, both injured, while Ayman Ashraf, Muhammad Abdel Moneim, Amr Al-Sulayya, Hamdi Fathi and Muhammada Sharif are the players who were in the final of the Africa Cup of Nations, defending Egypt in the vice to Senegal, returned in time to play the World Cup, thus leaving doubts in the possible lineup of Al Ahly.
10:45 AM3 months ago

Abel Ferreira will be without Gabriel Veron and Vinicius, both with Covid-19, while Renan, Gabriel Menino and Patrick de Paula were the ones cut from the final World Cup roster. Piquerez has recovered from Covid-19 and is a 'reinforcement' for the team.

Last game (and who is) Al Ahly

Palmeiras traveled to the UAE with 10 points in the state championship, leading group C of Paulistão, while Mirassol is right behind with eight points, followed by Ituano with seven and Botafogo-SP, with five.
10:30 AM3 months ago

In the preparation for the Club World Cup, Palmeiras played four games in the Paulista Championship, with three wins and a draw in these matches. On January 23th, against Novorizontino, the first victory came, 2-0, with goals from Zé Rafael and Dudu. Against Ponte Preta, on the 26th, the victory was 3-0, with goals from Murilo, Luan, and Rony. On the 29th came the draw, against São Bernardo, 1-1. Silvinho opened the scoring and Wesley, on penalty, equalized. And finally, on Tuesday (1), the victory was 1-0, over Água Santa, with a goal from Dudu.
10:25 AM3 months ago