We hope you enjoyed the Tottenham vs Southampton matchday 24 of the Premier League. Continue to visit the VAVEL website to keep up to date with all the information that comes up throughout the day.
5:39 PM3 months ago

The match ends at the Tottenham Stadium, Southampton comes from behind to take the three points away from home.
5:24 PM3 months ago

Goal! Tottenham Hotspur 2, Southampton 3. Che Adams (Southampton) header from the centre of the box to the bottom left corner. Assisted by James Ward-Prowse with a cross.
5:22 PM3 months ago

Goal! Tottenham Hotspur 2, Southampton 2. Mohamed Elyounoussi (Southampton) header from the centre of the box to the top left corner. Assisted by James Ward-Prowse with a cross.
5:14 PM3 months ago

The second half begins, Tottenham and Southampton are tied by the minimum at the moment.
4:33 PM3 months ago

The first half is over from Tottenham HotSpur Stadium, both teams go in level.
4:13 PM3 months ago

Attempt missed. Stuart Armstrong (Southampton) right footed shot from outside the box is high and wide to the left following a corner.
4:10 PM3 months ago

The match kicks off from London, Tottenham welcomes Southampton in the 24th Premier League matchday of the season.
3:34 PM3 months ago

In a couple of minutes we begin with the broadcast of the match Tottenham vs Southampton; duel corresponding to the 24th round of the Premier League.
3:33 PM3 months ago

Southampton have dropped 20 points after winning this season in the Premier League, second only to Newcastle in that regard (21). The Saints have drawn five of their seven league games after taking leads (2V).
Antonio Conte has won 20 of his last 21 home league games as manager between Inter Milan and Spurs, drawing the remaining 2-2 vs Liverpool. He is unbeaten in his first five home games with Spurs; only Peter Shreeve (first six in 1984) and George Graham (first 11 in 1998-99) had better home starts as Spurs managers in the division.
Harry Kane has been involved in 17 goals in 12 Premier League starts against Southampton (11 goals, 6 assists), and has scored five times in his last three home games against the Saints. Kane has been involved in more goals against them than any other player in Premier League history.
Harry Kane (11) and Son Heung-Min (9) have scored 20 of Tottenham's last 29 Premier League goals against Southampton, combining for six of them. They are one of only three duos to combine for six goals against the same club, after Alan Smith/Mark Viduka vs Charlton (6) and Frank Lampard/Didier Drogba vs Bolton (7).
Southampton's Nathan Redmond has assisted five Premier League goals this season, his highest tally in a single campaign and the most for a Saints player this season. His last eight assists have come at home and he has not done so away since July 2020 vs Bournemouth.
3:28 PM3 months ago

Tottenham Hotspur have won their last five Premier League home matches against Southampton, since a 1-2 defeat at White Hart Lane in May 2016.
Southampton have lost 13 of their last 19 Premier League matches against Spurs (3V 3E), although they did draw 1-1 earlier this season. They have not avoided defeat in back-to-back matches against them in the same campaign since 2003-04 (2V).
Spurs have won seven of their 10 Premier League home games this season (1E 2D), only the second time in the last 10 campaigns that they have won at least seven of their first 10 home games of the season, having won eight in 2016-17 under Mauricio Pochettino.
Since the start of 2021, Southampton have conceded 57 away goals in the Premier League, 18 more than any other team. Under Ralph Hasenhüttl, Saints have conceded three goals or more in 19 of their 60 visits (32%), while only Dave Jones (35%) saw his sides concede at least three goals in a higher proportion of away games in Premier League history among those who have managed at least 50 away games.
This is Spurs' first Premier League home game since Boxing Day, a 3-0 win over Crystal Palace. This is their first home fixture in 2022, their first home game later in the year since 1985, when they lost 1-2 to Manchester United in March.
3:24 PM3 months ago

THIS IS HOW SOUTHAMPTON START

This is Southampton's starting eleven to get the three points away from home. 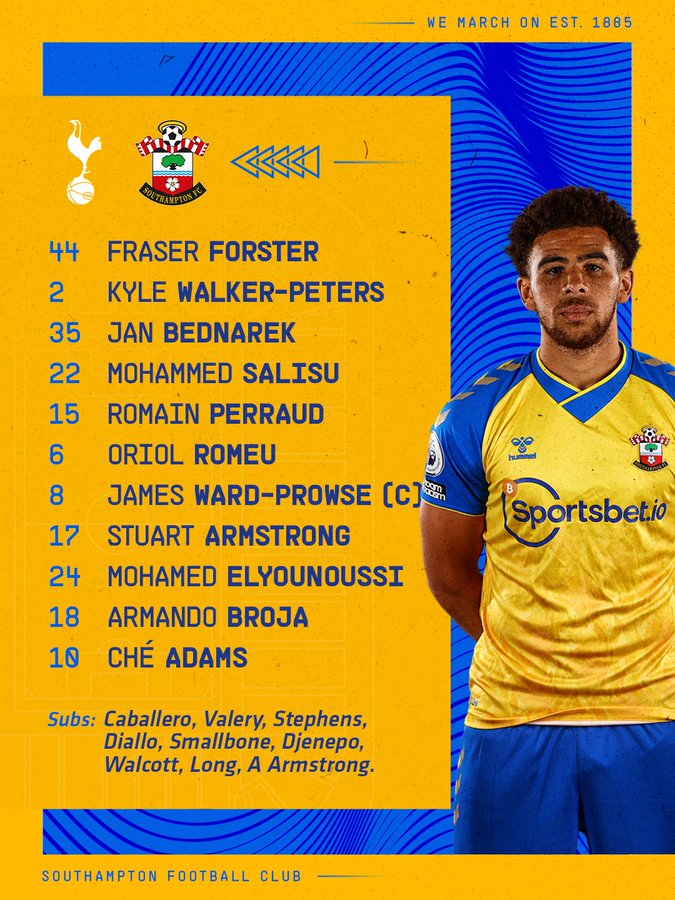 "Saints" show unstable soccer, however, feel good in the construction of offensive combinations. For example, in the extreme round, Southampton parted with the world with a formidable Man City: 1: 1, and the guys led the score until the 65th minute.Note that in February, Hasenhuttl Halls have already pleased the fans with the winning result: the Club beat in extra time Coventry City in 1/16 of the FA Cup final.
3:14 PM3 months ago

Spurs showed some great soccer with Brighton in 1/16 of the fa Cup final, 3-1. The hero of the clash was Harry Kane, who scored a brace. It should be noted that in the Championship, Conte's protégé is aiming to move up to the European Cup zone and has already drawn level on points with Arsenal. True, the coach was dissatisfied with the defeat against Chelsea (0-2) in the Last Matchday and noted that it is definitely necessary to improve the quality of positional play.
3:09 PM3 months ago

This is how Spurs will start today to face Southampton Saints. 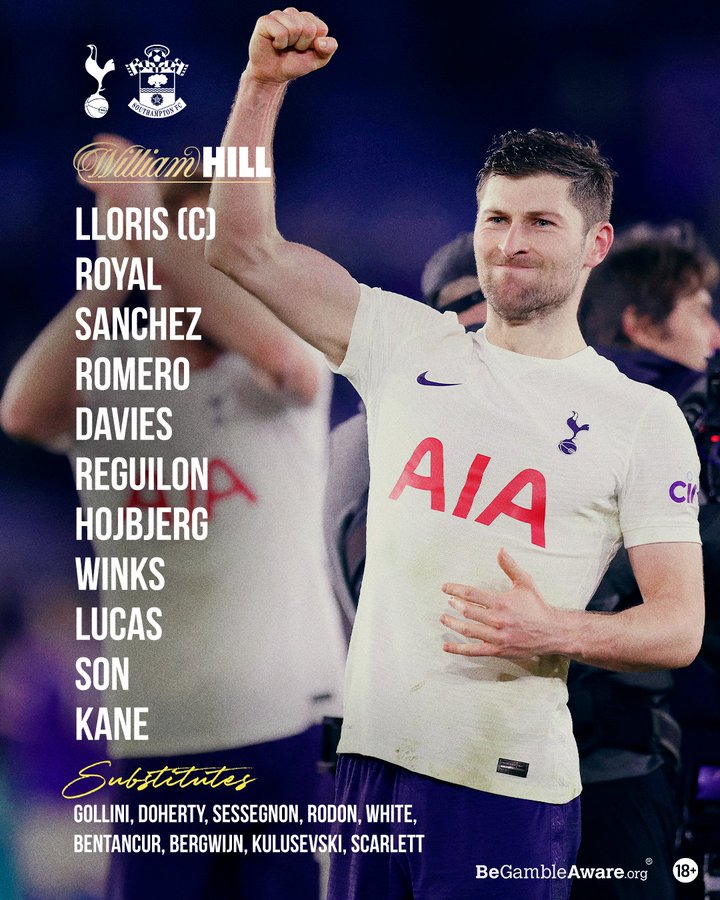 Last year, the teams played two matches. In the first clash, Tottenham won 2-1, while in the second the clubs lost 1-1.
2:49 PM3 months ago

Tottenham welcomes Southampton to the Tottenham HotSpur Stadium in what will be the continuation of the twenty-fourth round of the Premier League. Both clubs are in the mid-table zone and will be looking to continue climbing up the table in order to aspire to a qualification place for European competitions.
2:44 PM3 months ago

Do not miss a detail of the match with the live updates and commentaries of VAVEL. Follow along with us all the details, commentaries, analysis and lineups for this Tottenham vs Southampton match.
2:39 PM3 months ago

What time is Tottenham vs Southampton match for Premier League?

This is the start time of the game Tottenham vs Southampton of 8th February in several countries:

Armando Broja has become one of the fundamental pieces that Dyche has, the right back has gone from strength to strength since his arrival in the Premier League being an undisputed starter and increasing his value in the transfer market. At the moment he has 319 minutes played with Southampton, he has appeared 7 times in the starting lineup and has scored on 3 occasions, however, so far he still has not achieved his first assist with the celestial team. Likewise, he is in high spirits after collaborating in the scoreboard last week to help his team win the match, so Armando Broja will be the player to watch for this game. 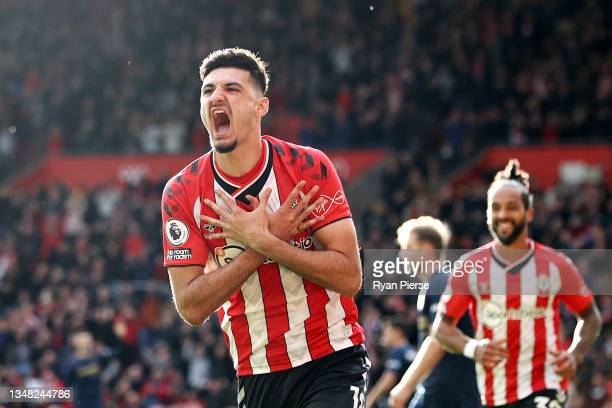 Watch out for this Tottenham player

One of the most beloved players of the fans and the Premier League, South Korean Heung-Min Son or Sonny; he is one of the key players Tottenham has had from 2015 to the present.  The left winger has played 197 games as a starter, has scored 70 times and assisted on 43 occasions since his arrival in the English top flight, also, with the departure of Harry Kane for this season, Conte's team has been forced to cover that drop in its lineup so Sonny has recently served as the new center forward of the squad so it could be reflected in the scoreboard in this duel against City. 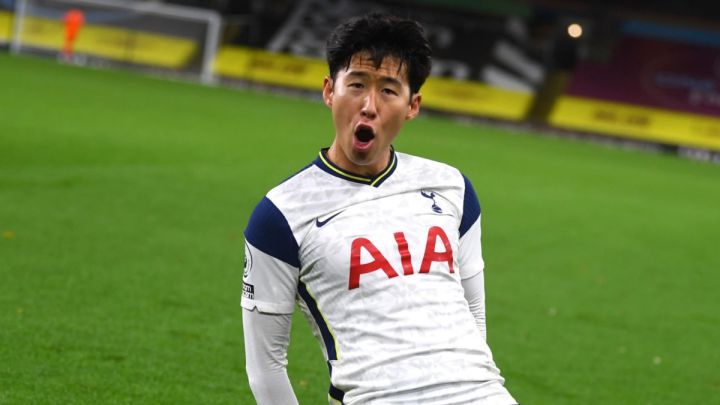 Tottenham and Southampton have met on a total of 130 occasions (59 wins for Spurs, 32 draws and 39 wins for the Saints) where the scales are slightly tipped in favor of the side led by Antonio Conte. In terms of goals, Tottenham are far better, with 232 goals scored while Southampton have scored 163 goals. Their last meeting dates back to matchday 20 of the current season where both clubs drew by the minimum.
2:09 PM3 months ago

Tottenham Hotspur Stadium is a sports venue located in the city of London, England, United Kingdom. It hosts home matches of Tottenham Hotspur Football Club of the English Premier League. It was inaugurated in April 2019.

Built on the same site as its predecessor, White Hart Lane, it has a capacity of 62 062 spectators, making it the seventh largest stadium in the United Kingdom and the third largest in the Premier League, behind only Old Trafford and the London Olympic Stadium.

They need to continue climbing positions

For their part, Southampton come into this match after having drawn against Manchester City in a thrilling duel where the Saints held on to take points against the overall leader of the competition. They are currently in 12th place in the overall table with 25 points earned which are the product of 5 wins, 10 draws and 7 defeats, likewise, in the statistics they average a total of 26 goals for and 34 goals against, a situation that leaves them with a negative goal difference of minus 8 goals.
1:59 PM3 months ago

Recovering from the setback

While it is true that since Antonio Conte's arrival at Spurs, the team has improved abysmally, Tottenham is still burdened with insecurities and mistakes that have cost them points along the way, which cost them the elimination from the Conference League and Carabao Cup, the latter at the hands of Chelsea, the rival they faced last matchday, who gave them another setback. With the leadership too far away, Tottenham is left to fight to get into the qualifying positions for European competitions, they are currently in 7th place in the table with 36 points obtained from 11 wins, 3 draws and 7 defeats, also, in the statistics they have 26 goals for and 24 against, having a balanced situation in the team and in the search of improving it.
1:54 PM3 months ago

The second half of the 2021-22 season has already started and with it began an exciting calendar for the teams as the end is slowly approaching, and this will be their last chance to climb positions, sneak into the places of direct qualification to European competitions or in the worst case, save themselves from relegation. On this occasion, both Tottenham and Southampton are in the mid-table zone, in 7th and 12th position respectively. Likewise, due to the regularity shown by the teams of the famous Big Six, it is complicated for both teams to sneak into the top of the table, however, anything can happen at the end of the season.
1:49 PM3 months ago

The Tottenham vs Southampton match will be played at the Tottenham HotSpur Stadium, in London, England. The kick-off is scheduled at 14:45 pm ET.
1:44 PM3 months ago

Welcome to VAVEL.com’s LIVE coverage of the 2021 Premier League: Tottenham vs Southampton!