Thank you for listening to this Premier League match. Have a good afternoon and see you next time!

Leeds are back on the field next Saturday (5), when they visit Leicester. Tottenham visit Middlesbrough next Tuesday (01), in the FA Cup.
10:21 AM3 months ago

With a resounding thrashing and booing at the end of the game, Tottenham beat Leeds away from home and sinks the opponent even further into crisis!
10:17 AM3 months ago

Raphinha got the ball on the edge of the area and was brought down by Davies, who was yellow-carded for the foul! Raphinha hit the ball into the left corner and it went in off Lloris' post!
10:14 AM3 months ago

Tottenham substitution: Son out, Scarlett in.
10:12 AM3 months ago

Son received another pass from Kane in the box, and now there was no way around it. He dominated, carried, and hit a hard shot to beat Meslier and extend the score!
10:11 AM3 months ago

Kane got a great pass to Emerson, who received inside the area and tried to dribble Meslier, but he came out well and took the ball off the defender's foot!
10:08 AM3 months ago

Daniel James received the ball inside the box and hit it hard, but it went to the right side of the goal!
10:05 AM3 months ago

Yellow for Rodrigo, for a foul on the attacking midfield. Sessegnon and Kulusevski were replaced by Emerson and Bergwijn. And in Leeds left Junior Firpo and entered Shackleton.
10:04 AM3 months ago

On a long throw-in Dallas was going off on his own in the middle. Then Lloris came out and went into the break, but he LOST and Dallas came out in front of the empty goal, with only one defender. Then he charged, invaded the area and hit, but blocked by the defense, missing the chance to open the scoring.
9:54 AM3 months ago

Kulusevski received the ball on the edge of the box, put it away and hit it hard, but Meslier picked it up in the left corner! Son took a corner kick at the far post, there was a deflection, and the ball went into Meslier's hands.
9:50 AM3 months ago

Sessegnon received the ball on the left, took it on his chest and hit it hard, but it hit the net from outside!
9:48 AM3 months ago

In the back of the defense Doherty received, charged and hit hard, but Meslier deflected to the middle of the area. On the rebound Son shot hard and the ball exploded off the defense!
9:43 AM3 months ago

Son took off from midfield, passed several defenders, and hit a weak shot into Meslier's hands.
9:40 AM3 months ago

Now in the midfield Dallas carted Sessegnon around and got yellow for his foul. And after that Daniel James hit Doherty hard and was yellow carded as well.
9:39 AM3 months ago

Yellow for Klich, for a touch on Hojbjerg in the attack field.
9:37 AM3 months ago

Dallas, with his left foot, hit it hard and over the goal.
9:34 AM3 months ago

James gets his first touch on the ball and it's off to the second half of the match!
9:33 AM3 months ago

The teams appear on the field to start the second half! And Leeds have had a double substitution: Struijk and Harrison are out, Rodrigo and Klich are in.

With another goalless start, Tottenham goes on to beat Leeds away from home!
9:14 AM3 months ago

Harrison crossed from the left and Ayling got the header, placed, in the right corner, but he put too much force and the ball went over the goal!
9:13 AM3 months ago

In the last minutes Leeds managed to apply some significant pressure and create some moves, but nothing effective to generate danger.
9:08 AM3 months ago

Harrison received on the left and crossed hard, but Lloris sprawled away!
9:02 AM3 months ago

Sessegnon received another pass in the back of the defense and hit hard, but this time Meslier saved the ball and saved Leeds from seeing the score become a rout!
8:58 AM3 months ago

Hojbjerg got a beautifully dug pass over the defense to Kane, in the small area, on the left, who hit a hard cross to extend the score!
8:47 AM3 months ago

Raphinha almost reduced the score with a shot from the edge of the area that stamped the left post of Lloris!
8:46 AM3 months ago

Kulusevski received the ball on the right, took out two defenders already inside the area and hit it hard, in the left corner, to extend the score!
8:41 AM3 months ago

Sessegnon received a beautiful pass on the left, invaded the area and crossed low for Doherty to arrive knocking and sending the ball into the net, opening the score!
8:35 AM3 months ago

Son hit a shot from outside the box and sent it into Meslier's hands.
8:33 AM3 months ago

From a free-kick on the left, Leeds got a lift and Struijk's head deflected it, sending it into the left side of the goal!
8:30 AM3 months ago

Before the ball starts to roll, the players kneel in protest against racism! And Kane takes the first touch on the ball and it rolls into the first half!
8:27 AM3 months ago

Also today, but at 12:30AM, Everton play Manchester City. Tomorrow we have only one game: West Ham vs. Wolverhampton. We would also have Chelsea-Leicester, but that game has been postponed because of the Carabao Cup final, where Chelsea faces Liverpool tomorrow.
8:05 AM3 months ago

Round 27 started yesterday, with Southampton's 2-0 win over Norwich. It continues today with many games on the same schedule.

The players appear on the field to begin their warm-up work.
8:00 AM3 months ago

Tottenham is lined-up and comes to the field with: 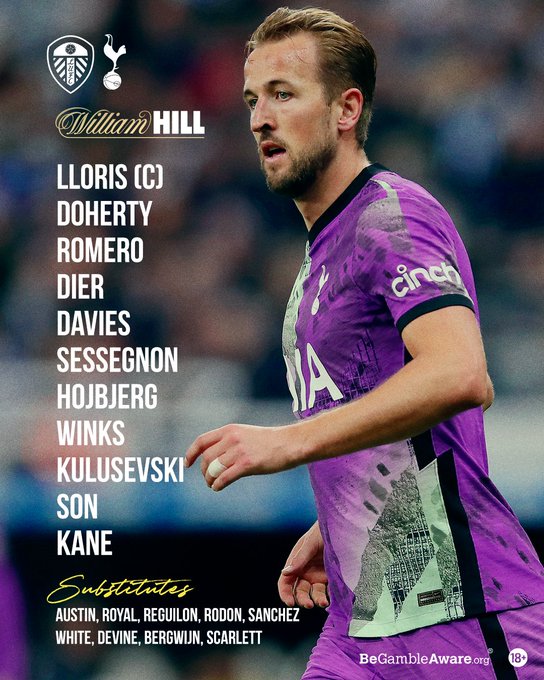 Leeds is lined-up and comes to the field with: 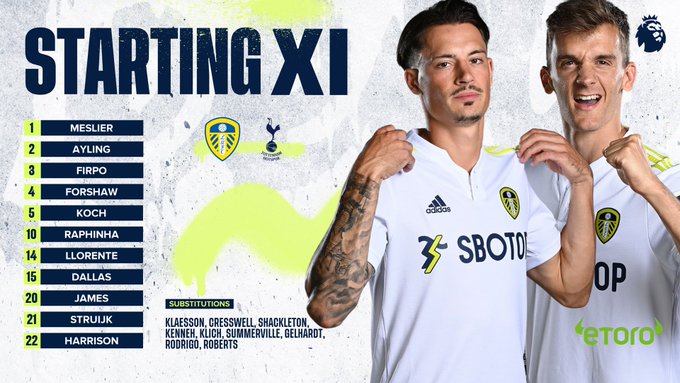 Now the broadcast of the Premier League match between Leeds and Tottenham begins!

How to watch Leeds vs Tottenham Live in TV and Stream

If you want to watch the game Leeds vs Tottenham live on TV, your options is: none.

What time is Leeds vs Tottenham match for Premier League?

This is the start time of the game Leeds vs Tottenham of 26th February in several countries:

Craig Pwason will referee the match with Ian Hussin and Richard West assisting. Jarred Gillett will be in charge of VAR.
7:30 AM3 months ago

The probable Tottenham team for the game is: Lloris, Romero, Dier and Davies; Kulusevski, Winks, Hojbjerg and Reguillon; Lucas, Kane and Son.
7:25 AM3 months ago

Marcelo Bielsa will be without Phillips, Cooper, Llorente and Bamford, while Conte does not know if he will be able to use Tanganga and Bentancur, both doubts for the confrontation.
7:15 AM3 months ago

Leeds have 23 points, bordering the Z-3, one point above Everton and Newcastle, three ahead of Burnley, the first team in the relegation zone, and one point behind Brentford. Tottenham, meanwhile, are on 39 points, one behind Wolves and three behind West Ham, and four points ahead of Southampton.
7:10 AM3 months ago

Tottenham comes from two defeats and one win in the last three games. The first defeat came on Sunday (13), by 2-0 to Wolverhampton, with goals from Raul Jimenez and Dendocker. Then came the victory over City, away from home, seeking recovery. Kulusevski opened the scoring, Gundogan equalized, Kane gave the lead on the scoreboard, and in the 47th minute Mahrez equalized. Then in the 50th minute Kane gave Tottenham the win 3-2. Then on Wednesday (23) came the painful defeat, to Burnley, 1-0, with a goal by Bem Mee.
7:05 AM3 months ago

Leeds comes into the match on a terrible run of form. The last three games combined have yielded an incredible 13 goals conceded and only two goals made. The first three were to Everton, on Saturday (12), away from home, coming from Coleman, Keane and Gordon. After that, on Sunday (20), another four, from Manchester United, who scored with Maguire, Bruno Fernandes, Fred and Elanga. Leeds this time even drew 2-2, with Rodrigo and Raphinha. Finally, on Wednesday (23), came another six, against Liverpool, with goals from Salah (2), Matip, Mané (2) and van Djik.
7:00 AM3 months ago