Thank you here for listening to another LaLiga match here on VAVEL. Have a good afternoon and see you next time!
1:17 PM3 months ago

Sevilla returns to the field on Friday (4), when they visit Alavés. Betis, on the other hand, play the Copa del Rey semifinal on Thursday (3), when they host Rayo Vallecano.
1:16 PM3 months ago

With a late goal Betis left a tension in the air, but the referee points to the center of the field and ends the Derbi with victory for Sevilla!
1:14 PM3 months ago

Munir is yellow carded for a foul on Ruibal on the edge of the area. And Canales hit the ball over the wall, sending it into the left corner of Bono, with no chance for the goalkeeper, reducing the score!
1:11 PM3 months ago

And we will have five more minutes of extra time in the match.
1:07 PM3 months ago

Yellow card to Augustinsson, for taking a long time to hit a foul in midfield.
1:01 PM3 months ago

Double substitution in Sevilla: Acuña and En-Nesyri left for Rafa Mir and Augustinsson.
1:00 PM3 months ago

Belerrín got the ball on the right, took it to the back line and dug in for Moreno to come in beating the left and he, well, he isolated it almost under the line.
12:57 PM3 months ago

Ruibal is yellow carded for a strong foul on Acuña in the attack field. Betis have a substitution: Guido Rodríguez is out, Paul is in.
12:56 PM3 months ago

Munir received the pass on the right, dominated, lined up and hit hard, but from the left side of the goal! And there was a yellow for Guido Rodríguez for an earlier foul that had an advantage. And there is a substitution in Sevilla: Jordán left and Óliver Torres came in.
12:50 PM3 months ago

Acuña felt and is currently being attended to. And before that Borja Iglesias left and Willian José came in.
12:46 PM3 months ago

Ruibal received from Bellerín on the edge of the box. He hit it hard and sent it over the goal!
12:42 PM3 months ago

Tello received on the left, took and hit high, cross, but Bono put for a corner, already beaten short!
12:37 PM3 months ago

Joaquín took a corner kick, closed and sent it into Bono's hands! And then Joaquín managed to play on the left and played to the middle, where Bartra arrived kicking and sent it to the left side of the goal!
12:27 PM3 months ago

Victor Ruiz played the ball into the box and Borja deflected it, but weakly and into the hands of Bono.
12:23 PM3 months ago

Borja Iglesias gets the first touch on the ball and it rolls into the second half of the derby!
12:22 PM3 months ago

The teams reappear on the field to start the second half. And in the Sevilla left Willian Carvalho and Fekir to Joaquín and Ruibal. In Sevilla left Diego Carlos and entered Gudelj.
12:08 PM3 months ago

With Sevilla's absurd pressure on Betis in these first 45 minutes, the hosts are winning 2-0!
12:05 PM3 months ago

Fekir lifted a free-kick into the box and Bartra managed to get his head on it, but from the left side of the goal.
12:04 PM3 months ago

And we will have four more minutes of extra time in the first half.
12:00 PM3 months ago

Munir was launched on the left with a great throw-in on Bono's goal kick, he dominated, invaded the area and hit a cross to beat Bravo, who still touched it, increasing the score!
11:48 AM3 months ago

Canales played the ball into the box, but there was an attacking foul.
11:47 AM3 months ago

Substitution in Sevilla: Papu Gómez left, injured, and Munir entered.
11:47 AM3 months ago

Yellow for Acuña, for a hard right hander on Fekir. The tension builds as he did this to stop the game as Betis would not put the ball out for Papu Gómez to be attended to after feeling his thigh.
11:42 AM3 months ago

Rakitic hit it into the right corner, with Bravo coming out to the left, with no chance of a save, opening the scoring for Sevilla!
11:41 AM3 months ago

Now there was no way. A long throw-in, En-Nesyri came out in the face of the goalkeeper, after a scramble with the defender, and was brought down by Bravo!
11:30 AM3 months ago

Guess what: confusion. Fekir went past markers in the backfield and earned a free-kick for Betis to breathe. Then a Sevilla player fell with his hand on his face and soon after a Betis player and then the confusion was formed! Canales and Jordán were yellow carded for the confusion and the derby was over!
11:24 AM3 months ago

In Acuña's cross from the left, En-Nesyri was able to throw himself on the ball and forced Bravo to save the ball away!
11:24 AM3 months ago

Navas received a beautiful pass from Corona, dominated in the area and hit a cross, but it went to the right side of the goal!
11:19 AM3 months ago

Jordán received the ball in the back line and was pulled, falling in the area, but the referee did not give the penalty and the fans are already on fire!
11:17 AM3 months ago

En-Nesyri makes the first touch on the ball and it rolls into the first half!
11:14 AM3 months ago

At the moment Villarreal are beating Espanyol 4-1 and today the games continue, with Real Sociedad vs Osasuna and Barcelona vs Athletic Bilbao. Tomorrow the round will be closed with the clash between Granada and Cadiz.
10:54 AM3 months ago

The round started last Friday (25), with Levante beating Elche 3-0. Yesterday she followed with Valencia beating Mallorca by 1-0.

The players appear on the field of the Ramón Sánchez Pizjuán to begin the warm-up work for the Derby later today!
10:45 AM3 months ago

Betis is scheduled for the match and comes to the field with: 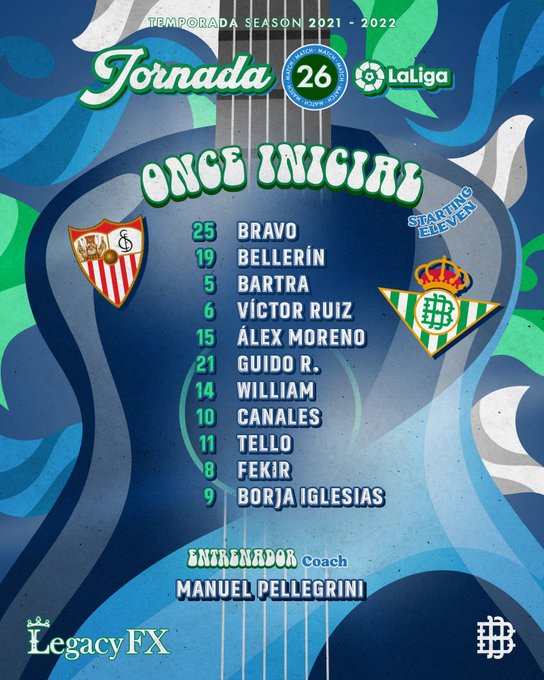 Sevilla is scheduled for the match and comes to the field with: 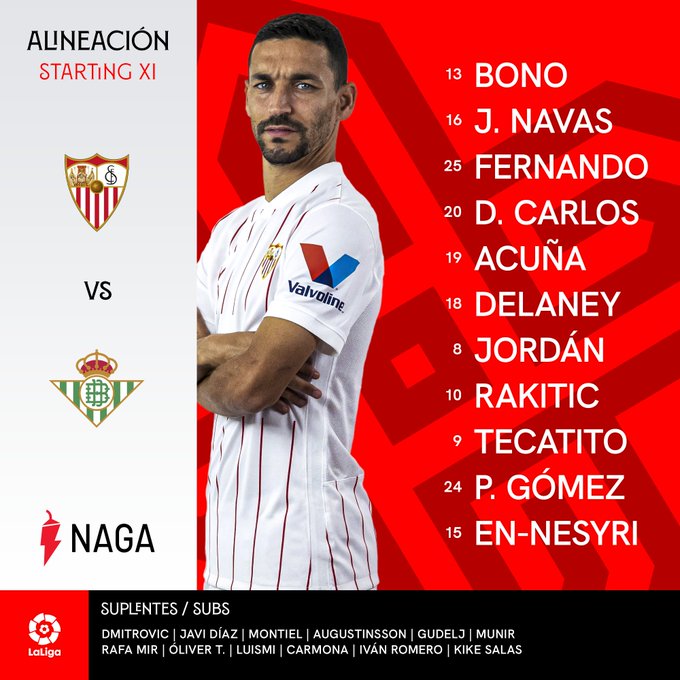 Now begins the broadcast of the LaLiga match between Sevilla and Betis, the Andalusian Derby!

Do not miss a detail of the match with the live updates and commentaries of VAVEL. Follow along with us all the details, commentaries, analysis and lineups for this Sevilla vs Betis match.
10:25 AM3 months ago

How to watch Sevilla vs Betis Live in TV and Stream

If you want to watch the game Sevilla vs Betis live on TV, your options is: none.

What time is Sevilla vs Betis match for LaLiga?

This is the start time of the game Sevilla x Real Betis of 27th February 2022 in several countries:

Carlos Del Cerro Grande will be the referee for the match, with assistants Juan Martínez Munuera and David Medié Jiménez.
10:10 AM3 months ago

The possible Betis for the match is: Rui Silva, Bellerin, Bartra, Gonzalez and Moreno; Rodriguez, William Carvalho, Juanmi, Canales and Fekir; Borja Iglesias.
10:05 AM3 months ago

The possible Sevilla team for the match is: Bounou, Montiel, Delaney, Gudelj and Acuña; Fernando, Jordan and Rakitic; Corona, Rafa Mir and Papu Gómez.
10:00 AM3 months ago

Sevilla will be without Lucas Ocampos and Kounde, both suspended, as well as Martial, Rekik, Diego Carlos Suso and Lamela, all injured. Betis will be without the injured Montoya and Miranda, as well as Camarasa and Rodri, who are doubts for the match.
9:55 AM3 months ago

Betis comes from two wins and a draw. Also on Thursday (17) and also in the Europa League, Betis beat Zenit away by 3-2, with Guido Rodríguez, Willian José and Guardado scoring, while Dzyuba and Malcom scored for the Russians. After that Betis played last Sunday and beat Mallorca 2-1, with Moreno opening the scoring, Muriqi equalizing and Willian José scoring the winner. And last Thursday, in the second leg at home in the Europa League, came the goalless draw that gave Betis the qualification.
9:45 AM3 months ago

Sevilla comes from three different results in the season. On Thursday (17), in the first leg of the Europa League, Sevilla beat Dynamo 3-1, with goals from Rakitic, Ocampos and Martial, while Orsic pulled a goal back. After that came the draw last Sunday (20), against Espanyol, 1-1, with Rafa Mir opening the scoring and Sergi Darder equalizing. And last Thursday (24) came the defeat, now for Dynamo, for the return match, with a goal from Orsic, but that Sevilla left with the classification on aggregate.
9:40 AM3 months ago

Welcome to VAVEL.com’s coverage of the 2021-22 LaLiga match: Sevilla vs Betis Live Score!