Thanks for following this game live!

Thank you for joining us in the broadcast of the LA Galaxy 1-0 New York City FC match, we are waiting for you at VAVEL for more broadcasts.
8:00 PM3 months ago

The game is over, the Galaxy get the victory at the last moment.
7:54 PM3 months ago

GGGGOOOOOAAALLLLL!!!! Chicharito Hernández cuts inside the area and opens the scoring in Los Angeles.
7:48 PM3 months ago

The game maintains the same trend and both teams have sparks on the offensive to look for the goal.
7:40 PM3 months ago

The pace slows down again on the pitch, both teams look tired and we'll see if it's enough for one of them to score or we'll end up with a draw.
7:35 PM3 months ago

The Galaxy is already knocking on the door, shots by Chicharito and Cabral that require the goalkeeper to keep zero on the scoreboard.
7:28 PM3 months ago

Greatest generation on the offensive of the Galaxy, Douglas Costa, Cabral and Chicharito begin to connect. The Cityzens look tired.
7:23 PM3 months ago

The Galaxy's offense begins to encourage more and puts pressure on the New York goal.
7:16 PM3 months ago

The game continues just as tight, there are not many spaces in the midfield.
7:07 PM3 months ago

The first half ends. Very even duel on the pitch.
6:49 PM3 months ago

The intensity on the field of play slows down a bit, there is no great offensive generation by any of them.
6:38 PM3 months ago

Very little danger in both goals, the Galaxy and the Cityzens who control the ball from one side to the other stand well behind.
6:31 PM3 months ago

Nothing for anyone, very even match. The Galaxy on the counterattack is more dangerous.
6:25 PM3 months ago

Very even game on both sides of the field, both teams begin to press the rival goal.
6:13 PM3 months ago

Even game, better control of the ball by the visitors. Difficult exit for the Galaxy.
6:04 PM3 months ago

Locals and visitors head to the dressing room to change into their respective outfits. The match is about to kick off at Galaxy FC.
5:48 PM3 months ago

Both teams are already on the field warming up for the match, which is just minutes away. 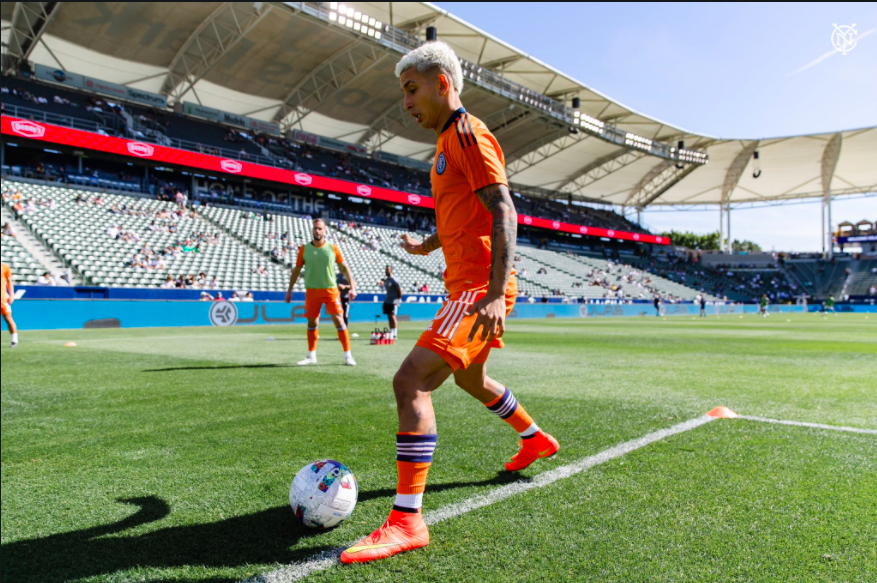 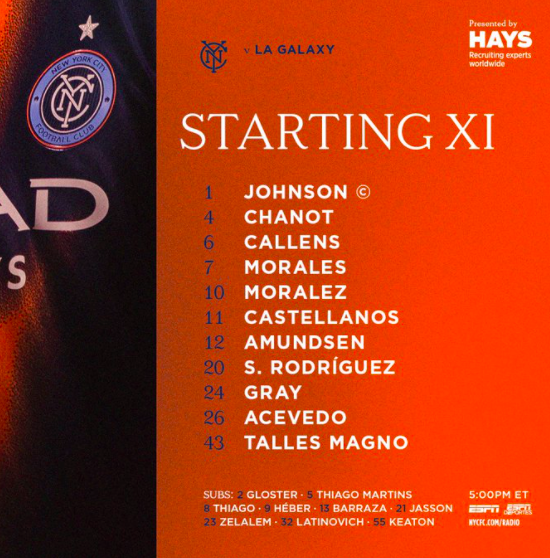 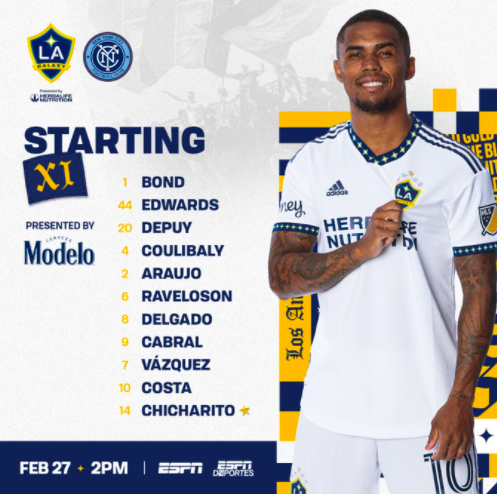 Unlike the Galaxy, the New York Galaxy have already been active this year as they are playing in the CONCACAF Champions League, where they reached the quarterfinals, which could be a factor in today's match.
5:34 PM3 months ago

The most winning club in MLS made some signings after the failure of the last tournament where they were left out of the playoffs. The incorporation of former Juventus and Bayern Munich winger Douglas Costa stands out.
5:29 PM3 months ago

The return of MLS this year is already a reality and both the Angelenos and the New Yorkers have already arrived at the Galaxy FC stadium for today's match. In the picture, Javier Hernandez. 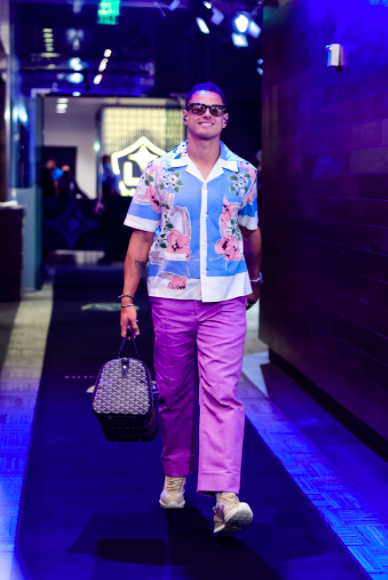 Dignity Health Sports Park will be the venue for this match between the Galaxy and New York. This sports venue is located in the city of Los Angeles, California, United States and usually hosts the Galaxy's home games. It has a capacity for 27 thousand spectators.
5:19 PM3 months ago

Everything is ready at the Dignity Health Sports Park for the return of the MLS, facing the New York champion against the Galaxy.
5:14 PM3 months ago

In the last 5 games, a dominance of the Cityzens predominates with 4 victories. The last time the Los Angeles team took the 3 points dates back to the 2015 season when they thrashed their rival 5-1, since then everything has been dominated by New York.
5:04 PM3 months ago

We're just under an hour before the LA Galaxy vs. NY City FC game kicks off at Dignity Health Sports Park. Both quintets will go out in search of victory. Who will make it tonight? Follow our coverage on VAVEL.
4:59 PM3 months ago

In a few moments we will share the starting lineups for the LA Galaxy vs. New York City FC, as well as the latest information from Dignity Health Sports Park. Do not miss any details of the match with minute by minute and live online from VAVEL.
4:54 PM3 months ago

We remind you that the game will be broadcast on television through ESPN, as well as streaming through the Star+ signal.
If you want to follow it online, VAVEL is your best option.
4:49 PM3 months ago

The last game between both teams was last season when New York defeated two goals to nil with goals from Maxi Moralez and Héber. On this occasion, the current champion jumps as the favorite but a possible victory for the Galaxy would not be a surprise.
4:44 PM3 months ago

Douglas Costa, a must see player!

The new Galaxy midfielder arrives as one of the great reinforcements of the MLS and hopes to add his great experience in the League. The Brazilian arrives to be one of the offensive generators and is expected to show his imbalance and great speed to be a benchmark for the team. Douglas Costa arrives on loan from the Brazilian Guild and it is expected that, along with Chicarito, they will be the new great duo of the MLS. The Brazilian midfielder is not a player with many goals, but he is a great assister and that is what is expected of him this season, that he be an important unbalancer and put half a goal on his teammates, without a doubt, it will be nice to see him in court.
4:39 PM3 months ago

How does the Galaxy get here?

The Los Angeles team will start a new season, after staying out of the MLS playoffs due to goal difference with Real Salte Lake. The Galaxy arrives at this new season with the goal of getting into the postseason, for this, the team was reinforced with Douglas Costa. The Brazilian arrives to team up with Chicharito Hernández up front and be the ones to guide the Angelenos offensively. Those led by Greg Vanney hope to have a season where injuries forgive them and allow them to have a full squad for as long as possible.
4:34 PM3 months ago

Valentín Castellanos, a must see player!

The Cytyzens striker is starting a new season where he will seek to once again be the team's top benchmark. Last season, the Argentine was a key player with 19 goals to put his team through to the MLS final. The combination that he can have with Max Moralez and Telles Magno will be fundamental for the aspirations of New York City FC. During the December market there was a lot of talk about the striker and his future, however, the board ratified him as part of Ronny Deila's squad. The forward has a new season to come and we will see if he becomes that fundamental pillar for the team.
4:29 PM3 months ago

How does the NY City FC arrive?

The current champion will start his way in the 2022 season in Californian territory, the New Yorkers arrive after finalizing the MLS championship last season. The Cityzens did not enter the playoffs as favorites last season, but managed to beat big teams like the Philadelphia Union, New England, Atlanta and Portland. Those led by Ronny Deila appear without many changes and without renowned reinforcements, but they have kept a large part of the champion squad and they are expected to be a tough team and to reach the postseason where they will fight to endorse the championship.
4:24 PM3 months ago

The Dignity Health Sports Park located in the city of Los Angeles will host this duel between two teams that seek to start the 2022 MLS season in the best way. This stadium has a capacity for 27,000 fans and was inaugurated in 2003.
4:19 PM3 months ago

Good day to all VAVEL readers! Welcome to the live broadcast of the LA Galaxy vs. New York City FC match, corresponding to Date 1 of the MLS 2022. The match will take place at the Dignity Health Sports Park, at 4:00 p.m.

Charlotte FC vs Vancouver Whitecaps preview: How to watch, team news, predicted lineups, kickoff time and ones to watch a day ago

Houston Dynamo vs Seattle Sounders preview: How to watch, team news, predicted lineups, kickoff time and ones to watch a day ago

Philadelphia Union vs Inter Miami CF preview: How to watch, team news, predicted lineups, kickoff time and ones to watch 5 days ago

New York Red Bulls vs Chicago Fire preview: How to watch, team news, predicted lineups, kickoff time and ones to watch 5 days ago

D.C. United vs NYCFC preview: How to watch, team news, predicted lineups, kickoff time and ones to watch 5 days ago