Thank you for following the Tijuana-León Liga MX game.
12:56 AM3 months ago

Montes leaves and Barreiro enters, León changes.
12:36 AM3 months ago

Fabián Castillo's shot from just outside the box into the goalkeeper's path.
12:31 AM3 months ago

Montes with the pass and Meneses with a two-timed low shot that passes very close to the base of the post.
12:26 AM3 months ago

Gómez had scored in the back of the net, but was penalized for offside.
12:21 AM3 months ago

Esquivel's shot crashes into the base of the post.
11:51 PM3 months ago

Martinez, who drove too long and at the end committed a handball, and then with a hand to hand shot that crashed into Gonzalez, missed two clear chances.
11:41 PM3 months ago

Elías Hernández's cut back and shot into the back of the net to open the scoring 1-0.

Rolán's service to the far post hits the crossbar and goes wide.
11:26 PM3 months ago

Strong collision between Esquivel and Rodriguez, where both were left lying on the field but both got out on their feet.
11:21 PM3 months ago

The second half begins between Juárez and León.
11:11 PM3 months ago

Martinez tried to cut inside the box, but the defense pressured him and disarmed him.
10:56 PM3 months ago

Rolán's shot from half distance goes high.
10:51 PM3 months ago

Federico Martinez's shot from a half turn just to Hugo Gonzalez's location.
10:41 PM3 months ago

Mosquera with the service from the right flank, but finds no recipient.
10:36 PM3 months ago

Lezcano with the service that is too long for Silvera's contact.
10:31 PM3 months ago

A corner kick was taken by Adrián Mora, but the ball was deflected wide.
10:26 PM3 months ago

Rodriguez is left lying on the field and medical assistance is called in.
10:21 PM3 months ago

Montes' mid-range shot was blocked by Gonzalez, who had trouble turning the ball away for a corner kick.
10:16 PM3 months ago

A lot of ball possession for the Emerald team, but still without generating danger.
10:11 PM3 months ago

The match between Juárez and León kicks off.
10:06 PM3 months ago

Juarez and Leon take the field in Liga MX protocol.
10:01 PM3 months ago

We are minutes away from kick-off between FC Juarez and Leon from the Estadio Olimpico Benito Juarez.
9:56 PM3 months ago

Necaxa is currently down 1-0 against Toluca in the start of the tenth matchday and, finishing, will start the game from the border.
9:51 PM3 months ago

Goes as a starter

With a tight schedule ahead for León, the Emerald squad will have some changes and tonight Luis Montes will return to the starting lineup in his homeland.

The Fiera has arrived

León arrived at the Estadio Olímpico Benito Juárez a few moments ago where, if they win, they could move up to fourth place in the overall standings.

This is the goalkeepers' hand in hand, who have been in the Mexican national team and could be in Qatar 2022: 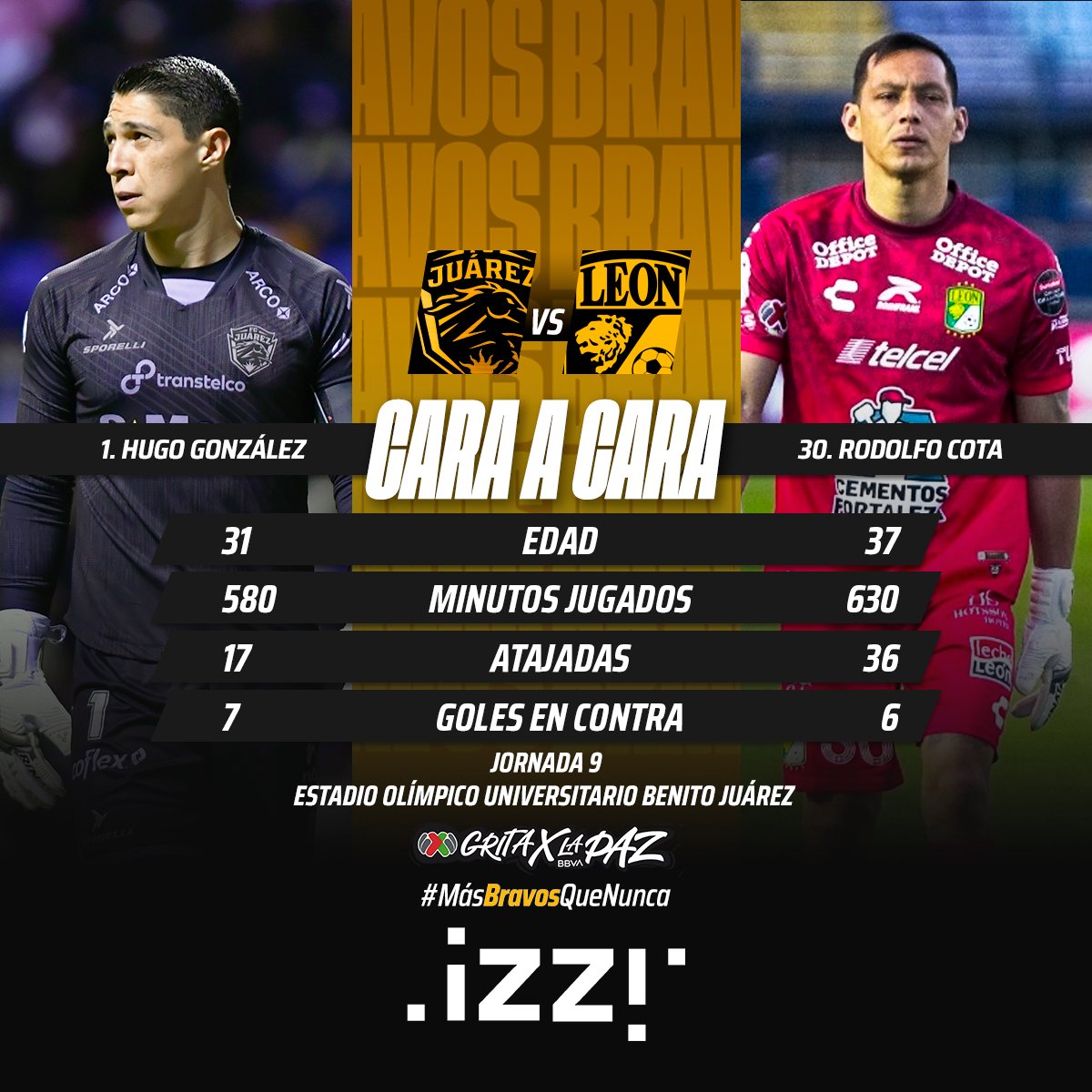 Meanwhile, Leon may be coming off their best game of the season and at home, but it wasn't enough and they settled for a 0-0 draw, including a penalty kick that Luis Romo missed.
9:11 PM3 months ago

Juárez is coming off an important 1-1 draw at the home of leaders Puebla, remembering that they need to win three points to avoid paying the non-relegation penalty.
9:06 PM3 months ago

The Bravos of Ciudad Juárez will be looking to return to winning ways against a León team that wants to continue climbing up the Liga MX standings. We begin with VAVEL's coverage of the game.
9:01 PM3 months ago

Do not miss a detail of the match with the live updates and commentaries of VAVEL. Follow along with us all the details, commentaries, analysis and lineups for this FC Juarez vs Leon match for the Liga MX 2022 on VAVEL US.
8:56 PM3 months ago

What time is FC Juarez vs Leon match for Liga MX 2022?

This is the start time of the game FC Juarez vs Leon of March 4th in several countries:

La Fiera has taken the measure of the border team with a record of three wins, one draw and one loss; although this setback occurred in the most recent clash that took place in 2021 in Guanajuato.

If there is one player who has been on fire at the start of the season, it has been Víctor Dávila, who is having a love affair with the goal with his ability to find space and always have clear chances during matches.
8:41 PM3 months ago

Fernando Arce has gradually earned the trust of "Tuca" to be in the starting lineup and, in addition, although he is not a center forward, he has scored goals in the last two matches with his great aerial play, which makes him a dangerous player in fixed tactical actions.
8:36 PM3 months ago

León has probably played the best soccer of the tournament against Monterrey, however, they were held to a scoreless draw at home and now they will have to get the full result to avoid being stuck in the middle of the general table; it is worth remembering that on Tuesday they will play in the Concachampions against the Seattle Sounders.
8:21 PM3 months ago

Although FC Juárez has accumulated four games without a win, on Tuesday's double-header, they were able to draw with authority against leaders Puebla, so they will now seek to finally make their home advantage count and start to get points, in order to avoid the non-relegation penalty.
8:16 PM3 months ago

The FC Juarez vs Leon match will be played at the Olimpico Benito Juarez Stadium, in Ciudad Juarez, Mexico. The kick-off is scheduled at 10:00 pm ET.
8:11 PM3 months ago

Welcome to VAVEL.com’s LIVE coverage of the Liga MX 2022: FC Juarez vs Leon!