FOR4
END15 hours ago

Thank you for following the Liga MX match between Monterrey and Mazatlan.
1:02 AM2 months ago

Between the crossbar, the post, the defense and the goalkeeper, Rayados' third goal after Gallardo's shot was stifled.
12:52 AM2 months ago

Alvarado and Hernández join the team

After reviewing the play, Nico Díaz is sent off.
12:42 AM2 months ago

Another yellow card and now it's for Sansores.
12:32 AM2 months ago

Palula has been cautioned, for Mazatlan.
12:22 AM2 months ago

Campbell's goal was not counted after the VAR review.

Goal disallowed to Joel Campbell when he had beaten the goalkeeper and defender.
12:12 AM2 months ago

Gallardo enters the area and takes a shot that Vikonis saves without major problems.
12:07 AM2 months ago

Maxi Meza receives the yellow card.
12:02 AM2 months ago

Solo header inside the box by Sansores to make it 2-1.

After reviewing the play, it indicates that there is no penalty on Benedetti.
11:32 PM2 months ago

The VAR reviews a possible sending-off.
11:27 PM2 months ago

The match is stopped so that the players can meet and hug each other in the center circle, sending a message of respect and friendship after what happened in Querétaro.
11:22 PM2 months ago

Maxi Meza is hit hard and Mazatlan's Diaz is cautioned.
11:17 PM2 months ago

Benedetti's cross and Andrada with his foot manages to cut the ball.
11:07 PM2 months ago

The second half begins between Monterrey and Mazatlan.
11:02 PM2 months ago

Campbell with the definition of the inside, despite the goalkeeper's deflection, the ball enters the net 2-0.

Janssen's pass into the box and Vikonis reflexively saves the ball.
10:37 PM2 months ago

Medina's service to the far post that nobody managed to close and once again Monterrey warned.
10:32 PM2 months ago

Campbell opens the ball and Aguirre shoots first time, but it hits the outside of the net. Monterrey close.
10:22 PM2 months ago

Vincent Janssen has been cautioned, for Monterrey.
10:17 PM2 months ago

John Medina anticipates and manages to deflect the cross from a free kick to send the ball into the net and make it 1-0.

A foul on the edge of the area will result in a free kick for Monterrey.
10:07 PM2 months ago

Maxi Meza was in an advanced position and is penalized.
10:02 PM2 months ago

Too long a service for Aguirre and Vikonis comes out to control the ball.
9:57 PM2 months ago

Corner kick to the near post that is blocked by the Mazatlán defense.
9:52 PM2 months ago

Nicolás Benedetti's shot that reaches the hands of Esteban Andrada.
9:47 PM2 months ago

Game starts between Monterrey and Mazatlan.
9:42 PM2 months ago

In a few minutes Monterrey and Mazatlan will be kicking off at the Steel Giant.
9:37 PM2 months ago

Mazatlan, as well as the rest of the Liga MX teams, sent a message to avoid violence after the events that took place last week in Queretaro.

Mazatlan informed that both Ivan Moreno and Ygor Nogueira will not be active this Friday due to injuries. 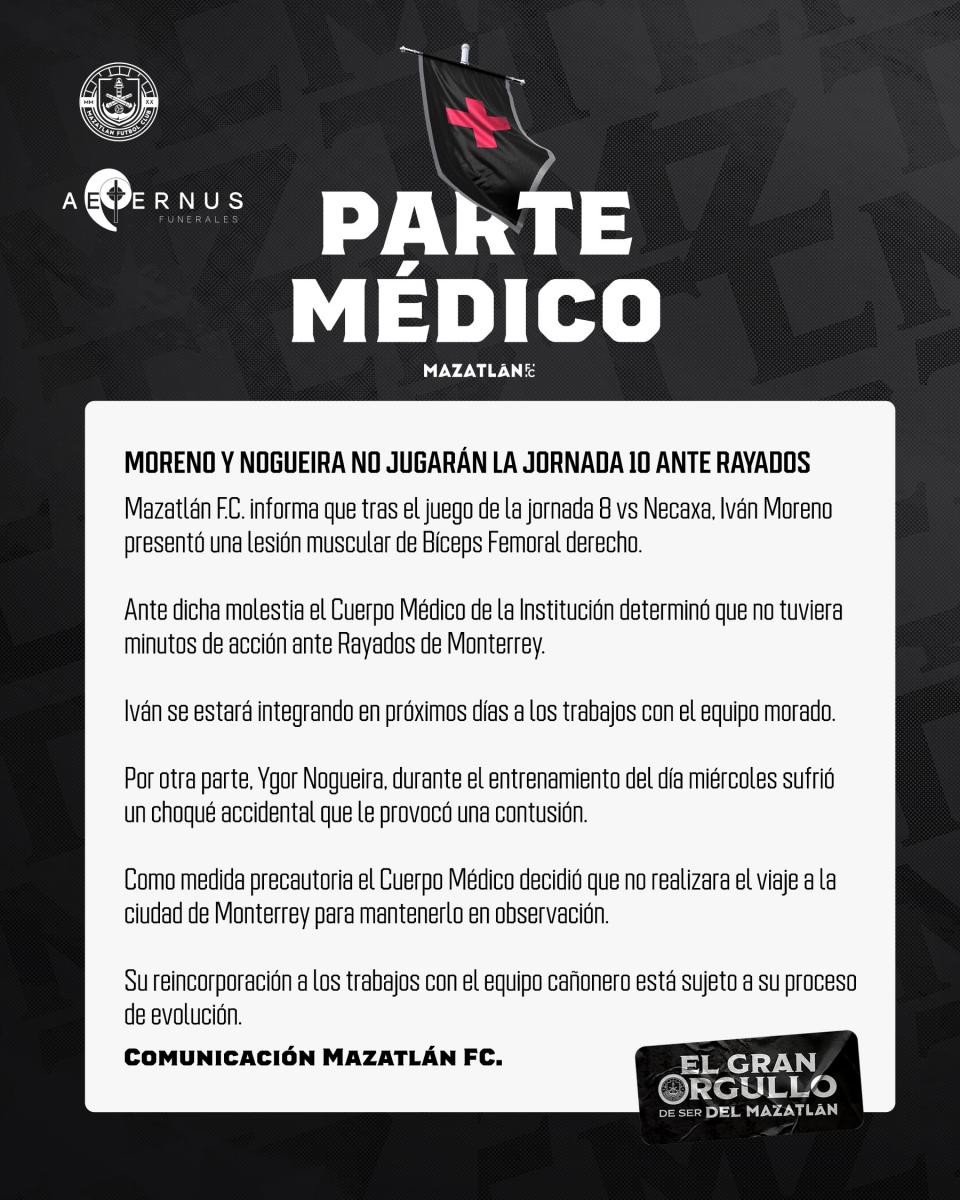 Led by King Midas, Monterrey arrived at the Steel Giant with the mission of winning for the first time at home.

How does Mazatlan arrive?

Mazatlán is in second to last place with only seven points, one more than last place América, although they still have a pending game against Pumas that was not played last week.

Furthermore, everything seems to indicate that Gabriel Caballero will be the new coach of the Cañoneros.

How does Monterrey arrive?

Monterrey is currently in 12th place with nine points and could move up to eighth place with a win and a combination of results. Monterrey is coming off a 2-1 win over América and still has two games pending due to its participation in the Club World Cup.
8:52 PM2 months ago

The Rayados de Monterrey will have their second consecutive home game and are looking to take advantage of it when they take on the Cañoneros de Mazatlán at home. We begin our coverage of the Liga MX game on VAVEL.
8:47 PM2 months ago

Do not miss a detail of the match with the live updates and commentaries of VAVEL. Follow along with us all the details, commentaries, analysis and lineups for this Rayados Monterrey vs Mazatlan match for the Liga MX 2022.
8:42 PM2 months ago

What time is Monterrey vs Mazatlan match for Liga MX 2022?

This is the start time of the game Monterrey vs Mazatlan of March 11th in several countries:

Only on three occasions have these two clubs met, with the Cañoneros, so far, unable to beat the Monterrey side:

Although the club has not been doing very well, Nicolas Benedetti seems to be having his second wind with the Cañoneros, where he has contributed with some goals and his good technique and unbalanced play has caused some headaches for rival defenses.
8:27 PM2 months ago

Costa Rican Joel Campbell did not have many minutes under "Vasco", but last Saturday he returned to the starting lineup with "Rey Midas" and changed the face of the offense, especially due to his speed on the flanks, which is where he generates a lot of damage.
8:22 PM2 months ago

Following the dismissal of Beñat San José, Christian Ramírez has taken over as interim coach and will seek to change the team's face, where their main ailment has been the defensive sector, as well as to rescue points away from home, since they have lost all of them away from the Kraken; their last game was a couple of weeks ago when they tied at home and without goals against the Rayos del Necaxa.
8:07 PM2 months ago

After Víctor Manuel Vucetich's debut was on the right foot with a 2-1 win over the Águilas del América, the Rayados de Monterrey team is now focused on getting good results to climb up the standings and get into the top eight, remembering that this will be their second home game in a row.
8:02 PM2 months ago

The Monterrey vs Mazatlan match will be played at the BBVA Stadium, in Nuevo Leon, Mexico. The kick-off is scheduled at 10:06 pm ET.
7:57 PM2 months ago

Welcome to VAVEL.com’s LIVE coverage of the Liga MX 2022: Monterrey vs Mazatlan!

Columbus vs LAFC, and weather; lose 0-2 at home 2 days ago