96' West Ham regains possession, Rice and Lanzini hold the ball on the left side, near the corner flag, and the referee closes the game
12:13 PM2 months ago

94' Yarmolenko tackles Buendia in the midfield and the referee calls a foul, but when it is time for the shot, the Villa player hits the wall

91' McGinn takes a corner kick on the left side of the box, hits it with his left foot and the ball goes out
12:05 PM2 months ago

90' JACOB RAMSEY! After a move down the right, Bailey moves in, Buendía touches back, and the Englishman takes a first-time shot to Fabianski's left corner
12:04 PM2 months ago

89' Bailey lifts the ball to Buendia in the box, he gets a first-time shot and Fabianski deflects with his left arm and gives away the corner
12:00 PM2 months ago

87' Buendia throws the ball to Bailey in the area, but Fabianski follows up and keeps the ball

82' PABLO FORNALS! Bailey loses the ball in the midfield, Rice plays a counterattack down the middle and opens for Benrahma on the left, he touches it to the middle of the box and then the Spaniard finishes it to Martinez's right corner
11:56 AM2 months ago

81' Coutinho plays to Bailey on the right, he cuts inside and sends it into the middle of the goal, then Fabianski saves calmly
11:52 AM2 months ago

80' Yarmolenko takes off from the right, searches for the goal line, loses the angle and shoots outside the net
11:52 AM2 months ago

78' Coutinho hits a direct shot into the right corner, but it hits the wall and is awarded a corner kick. After a lift from the left, Mings gets to the second post, but heads too high and the ball goes out the back line
11:47 AM2 months ago

77' Coutinho plays to Bailey on the edge of the box, Declan Rice comes along and brings down the Jamaican. Fabianski puts four in the box and Fornals lays back to prevent the low shot.
11:45 AM2 months ago

75' Douglas Luiz takes a fierce corner from the left, Fabianski punches it away and then Aston Villa fails in their attempt to grab the rebound
11:43 AM2 months ago

73' Bailey opens for Cash on the right near the side, but he is disarmed while trying to dribble
11:40 AM2 months ago

70' YARMOLENKO! Benrahma's throw-in on the left sees the Ukrainian in the middle of the box and lifts the ball into the box. The No.7 controls the ball with his right hand and hits it with a left-footed volley into the left corner of Martinez!
11:37 AM2 months ago

67' Lanzini tables with Benrahma on the left, the Argentine flicks the ball to Fornals, who misjudges and the defense takes it away
11:34 AM2 months ago

64' Benrahma takes a chance from outside the area, but is stopped while shooting
11:32 AM2 months ago

60' Fornals takes a corner from the left in the middle of the box, Zouma heads it away, but Martinez slaps it away with his left hand. The rebound goes to Dawson, who was free in the small area in front of goal, but he heads over the crossbar.
11:28 AM2 months ago

57' Ryan Fredericks in place of Aaron Cresswell
11:27 AM2 months ago

55' Following a corner kick from down the left, Ings hits the right corner, the ball touches the post and goes back into Fabianski's hands
11:27 AM2 months ago

54' Creswell receives assistance after suffering pain in his right leg
11:27 AM2 months ago

53' Johnson gets forward on the right and crosses, the ball goes past Lanzini and Chambers kicks it away
11:26 AM2 months ago

50' Antonio collapses on the pitch and asks for a substitution
11:20 AM2 months ago

49'Villa arrives with Coutinho, who first suffers a foul in the attack field and then tries a shot from outside the area with his right foot but misses the target
11:14 AM2 months ago

51' Game stays truncated and Martinez tries to launch to the attack field, but as soon as the ball touches the grass the referee ends the first half
10:54 AM2 months ago

47' Antonio tries a move with Benrahma and Lanzini on the left and wins a corner. Fornals goes for the shot and hits it close, then Martinez makes the save in two strokes
10:51 AM2 months ago

45' Douglas Luiz arrives in the area, Lanzini lifts his foot too much in the division and hits the face of the Brazilian, who falls and requests medical attention. The player from West Ham is booked.
10:49 AM2 months ago

43' McGinn takes a free-kick from the left into the box, the ball touches Zouma and goes towards goal, but Fabianski was attentive and kept it
10:46 AM2 months ago

41' Young receives the ball on the left and waits in the box for Watkins, who splits with goalkeeper Fabianski and wins a corner. After the ball is taken from the right, Zouma heads it away
10:42 AM2 months ago

37' Villa comes out playing foot to foot, Coutinho receives in the middle and releases Cash on the left, he crosses but stamps the West Ham player, who regains possession
10:39 AM2 months ago

34' Johnson tries to throw the ball into the attack field, but the ball goes straight to the side
10:38 AM2 months ago

25' Chambers sends the ball to a corner and West Ham continues to attack
10:25 AM2 months ago

19' Ramsey receives on the left, clears the marking and crosses to the middle of the area, where Coutinho was closing in to share with Fabianski. The Brazilian tries the heel touch, but does not reach the ball and the goalkeeper gives the corner.
10:23 AM2 months ago

17' Antonio starts with the ball from the defense field and opens to Fornals on the right, he misses the pass when returning, in the sequence Soucek and Lanzini arrive at the right end, but no one can finish in goal
10:20 AM2 months ago

14' West Ham remain more present in the attacking field, looking for the best moment to shoot, and Aston Villa closes in
10:15 AM2 months ago

8' Lucas Digne puts his hand on the back of his left thigh. Young goes to the warm-up.
10:14 AM2 months ago

7' Antonio receives the ball on the left midfield, sews to the middle and plays to Pablo Fornals, who shoots from mid-range, the shot is low and to the right of Martinez
10:13 AM2 months ago

5' Algerian player tests the goalkeeper with a long shot that goes to the left of the goal
10:09 AM2 months ago

4' Cresswell comes down the left, goes to the back line and rolls back, Benrahma finishes and Martinez falls well to avoid the first goal
10:08 AM2 months ago

2' Aston Villa take the initiative, after a move down the right, the ball falls to Danny Ings in the middle of the box, but the player lets it slip and then Fabianski holds calmly.
10:04 AM2 months ago

THE FIRST HALF BEGINS

00' Ball rolling in London. Aston Villa move the ball around to start the first half!
10:03 AM2 months ago

Applause from the fans and tribute to the Irishman who made over 300 appearances for West Ham and passed away last Sunday (6).
9:58 AM2 months ago

Players come up from the locker rooms and wait for the referee's whistle to start the match
9:45 AM2 months ago

Bringing the fun to your Sunday 😎#PL pic.twitter.com/Sq0ekRJFXn 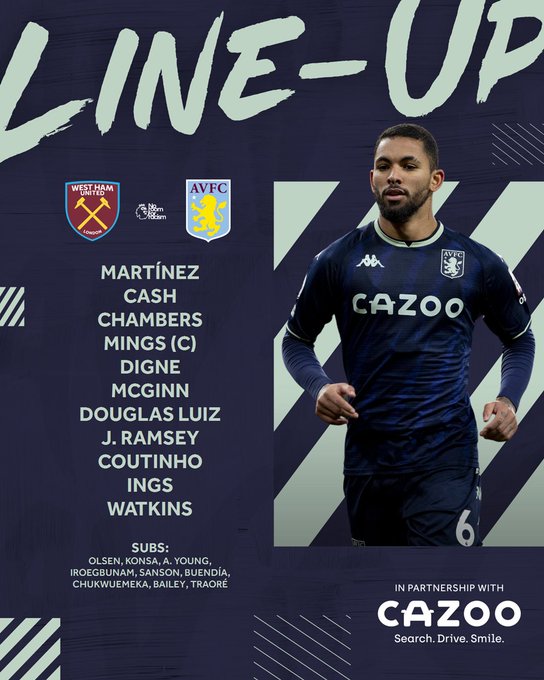 Hey! We are back with the latest news, behind the scenes information, lineups and much more about the match between West Ham and Aston Villa. There is less than 1 hour until kick-off in London, so come with us!
9:15 AM2 months ago

Do not miss a detail of the game with the live updates and commentaries of VAVEL. Follow along with us all the details, commentaries, analysis and lineups for this
West Ham vs Aston Villa match.
9:10 AM2 months ago

How to watch West Ham vs Aston Villa Live Stream on TV and online?

If you want to follow this match between this West Ham and Aston Villa, just tune in to SKY Mexico (Mexico) or NBC Sports (USA). You can also check all the plays in real time here on VAVEL live text, with a pre-match preview 1 hour before the game starts.
9:00 AM2 months ago

The team has already changed managers - Steven Gerrard took over in November. Overall they have played 30 games - 12 wins, four draws, and 14 losses. Despite this, the current momentum is opposite to that of the rival - they have won the last three games, including a 4-0 thrashing, and have not conceded a goal in this period.
8:15 AM2 months ago

The London side has played 41 games in the 2021-22 season, winning 20, drawing eight and losing 13. The current phase is complicated: three defeats in a row, and they have not scored for two matches (Sevilla and Liverpool).
8:10 AM2 months ago

History records 115 games between the teams, with West Ham winning 43, Aston Villa 38 and Aston Villa 34. In the last game, in October at Vilal Park, Ben Johnson, Declan Rice, Pablo Fornals and Jarrod Bowen built the 4-1 win for David Moyes' side and Ollie Watkins' side eased off.
8:05 AM2 months ago

Hi everyone! My name is Bia Palumbo and I will be your host for this game between West Ham and Aston Villa. We will provide you with pre-game analysis, roster updates, and news as it happens live here on VAVEL.