Thank you for listening to this Europa League match. Have a good night and see you next time!
5:55 PM2 months ago

Lyon now joins Leipzig, Barcelona, Atalanta, Rangers and Braga as qualified for the next round. Eintracht Frankfurt-Betis and West Ham-Sevilla are in extra time!
5:53 PM2 months ago

Lyon draw at home against Porto and qualify by virtue of their first leg win!
5:52 PM2 months ago

Ekambi was launched in the middle, he shot hard and Diogo Costa saved the ball. On the rebound Paquetá isolated the ball!
5:51 PM2 months ago

In a survey in the area Pepe gave back to the middle, where Vitinha, in the small area, alone, put his foot on the ball and did not dominate, finished or passed to the one who was free, with the ball being left to Lopes!
5:49 PM2 months ago

Paquetá, in the middle of the field, shot from outside the area and sent it into the hands of Diogo Costa. And we will have four more minutes of extra time.
5:36 PM2 months ago

Substitution in Porto: Grujic left and Taremi came in.
5:35 PM2 months ago

Pepe hit the ball from outside the area and sent it through the right side of the goal!
5:33 PM2 months ago

Double substitution in Porto: left Martínez and Galeno to the entry of Taremi and Evanilson.
5:32 PM2 months ago

Paquetá, on Porto's exit error, managed to keep the ball, dominated spinning in the marking and found Aouar in the middle, who hit hard from outside the area and forced Diogo Costa to save and keep the rebound!
5:23 PM2 months ago

Double substitution in Lyon: Faivre and Dembélé left to enter Aouar and Kadewere.
5:22 PM2 months ago

Paquetá got a great pass to Dembélé, who received in the middle and hit hard, but Diogo Costa deflected away!
5:15 PM2 months ago

Martinez makes the first touch on the ball and it rolls into the second half of the match!
5:01 PM2 months ago

The teams take to the field to start the second half of the match!

END OF FISRT HALF

In an intense first half, Lyon and Porto draw, and with this result the French team is the one that goes through!
4:28 PM2 months ago

The ball arrived on the right for Fábio Vieira, who had received Pepê's pass and crossed for Pepê himself to hit a first-time shot, high into Lopes's right corner, equalizing the match!
4:21 PM2 months ago

Dubois received the pass on the right and crossed to the head of Dembélé, who sent it over the goal!
4:16 PM2 months ago

The answer came in a great table, but Fábio Vieira hit it weakly and Lopes got it.
4:13 PM2 months ago

As Dembélé escaped through the middle, he received a pass from Dubois between the defenders, got in front of Diogo Costa, and hit a low shot to open the scoring for Lyon. The first chance of the match is Lyon's goal!
4:00 PM2 months ago

Dembélé makes the first touch on the ball and it rolls into the first half of the decisive match!
3:58 PM2 months ago

We will have only two matches at the same time as this one. Eintracht Frankfurt face Betis, with a 2-1 first leg advantage, while West Ham host Sevilla, with a 1-0 first leg win for Sevilla
3:44 PM2 months ago

The round of 16 round began earlier today with Atalanta's 1-0 win over Leverkusen, which qualified Atalanta by a 3-2 first leg score. At the same time Monaco drew 1-1 with Braga and Braga qualified by winning 2-0 first leg. Red Star won 2-1 against Rangers and the Scottish team went through by winning 3-0 first leg. Finally, Barcelona won 2-1 and qualified after a goalless draw.
3:24 PM2 months ago

The players take to the field to begin their warm-up exercises.
3:19 PM2 months ago

Porto is lined-up and comes to the field with: 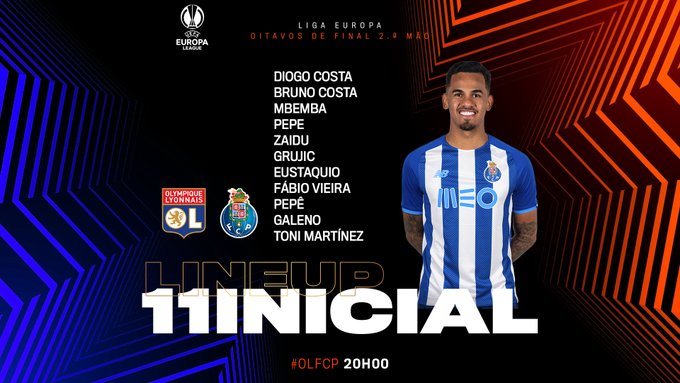 Lyon is lined-up and comes to the field with:

Now the broadcast of the Europa League match between Lyon and Porto begins!

Do not miss a detail of the match with the live updates and commentaries of VAVEL. Follow along with us all the details, commentaries, analysis and lineups for this Lyon vs Porto match.
2:59 PM2 months ago

How to watch Lyon vs Porto Live in TV and Stream

If you want to watch the game Lyon vs Porto live on TV, your options is: none.

What time is Lyon vs Porto match for Europa League?

This is the start time of the game Lyon vs Porto of 17th March 2022 in several countries:

Ovidiu Hategan will referee the match with the assistants Mircea Mihail Grigoriu and Sebastian Gheorghe. Marco Di Bello will be in charge of VAR.
2:44 PM2 months ago

In the first leg in Portugal on Wednesday (9), Lyon took the lead and won by the minimum score, with a goal from Lucas Paquetá.
2:24 PM2 months ago

Porto, meanwhile, also comes with two goals, but both were scored by Porto themselves. The first, before the first leg, was by 4-2, over Paços de Ferreira, on Sunday (6), with goals from Pepê, Evanilson (2) and Taremi, while Delgado and Gaitán scored. And last Sunday (13) the victory was over Tondela, 4-0, with goals from Taremi, Galeano, Fábio Vieira and Francisco Conceição.
2:19 PM2 months ago

Lyon, in between games in the Europa League, managed to suffer and score. The goal was before the first leg, by 4-1, over Lorient, on Friday (4), with goals from Faivre (2), Dembélé and Ekambi, while Moffi scored. And last Sunday (13) the defeat was suffered to Rennes, at home, by 4-2, with goals from Bourigeaud, Santamaria, Majer and Terrier for the visitors, while Traoré (against) and Dembélé deducted.
2:14 PM2 months ago