Thank you for listening to this match of the Primeira Liga. A good night and see you next time!

Boavista returns to the field on Sunday (3), when they visit Famalicão. Porto plays on the same day, when it receives Santa Clara.

With a single goal from Fábio Vieira, Porto wins away to Boavista!

In another good pass in the area came a cross from Gorré in the area and Musa headed it, but it hit the crossbar!
6:33 PM2 months ago

Evanilson got the shot already inside the area with a pass from João Mário and hit the right post of Bracali!
6:26 PM2 months ago

A corner kick from the right was deflected and Gorré missed the chance to tie the game!
6:22 PM2 months ago

Substitution in Porto: out Vitinha and in Grujic.
6:15 PM2 months ago

Evanilson hit it into the right corner and Bracali flew to catch it. On the rebound there was another shot coming from the right and the goalkeeper deflected it away!
6:13 PM2 months ago

Fábio Vieira invaded the area and was brought down by Abascal, earning Porto a penalty!
6:11 PM2 months ago

The referee went to the VAR to review the throw where Yusupha felt the injury, as a stomp by Mbemba happened, but he kept only the yellow card.
6:09 PM2 months ago

Substitution in Boavista: Yusupha and Gorré came in.
5:57 PM2 months ago

Musa makes the first touch on the ball and it rolls into the second half of the match!
5:57 PM2 months ago

The teams reappear on the pitch to start the second half of the match!

With a goal from Fábio Vieira the match goes to the interval with a partial victory for Porto over Boavista!
5:36 PM2 months ago

Musa took a chance from a distance and sent it over the goal, in a dangerous shot!
5:21 PM2 months ago

When Evanilson went down the left, the striker crossed to Fábio Vieira, who arrived kicking and sent it to the bottom of the goal, opening the score!
5:13 PM2 months ago

In a clash of heads Pepê took the worst in the division with Porozo and left the field on a stretcher to the entry of Galeno. And confirming that by injury at Boavista left Garcia to the entry of Nathan.
5:06 PM2 months ago

Porozo is yellow carded for a hard tackle on Fabio Vieira in midfield.
5:03 PM2 months ago

In a cross coming from the right Vitinha managed to get a header to the ground and sent it over the goal.
4:53 PM2 months ago

Vitinha managed to get a strong shot already inside the area and Bracali deflected it away!
4:49 PM2 months ago

Taremi makes the first touch on the ball and it rolls into the first half of the match
4:47 PM2 months ago

Earlier today Gil Vicente drew 1-1 with Marítimo, while Paços de Ferreira beat Moreirense and Benfica beat Estoril, both 2-1. At the moment Portimonense and Braga are facing each other and the game is 2-0 to Braga.
4:25 PM2 months ago

The round started on Friday (18), with a 1-1 draw between Vizela and Famalicão. Where the round followed with a 2-2 draw between Tondela and Arouca, a goalless draw between Santa Clara and Belenenses, and Sporting's 3-1 win against Vitória.

The players appear on the field to begin their warm-up work.
4:00 PM2 months ago

Boavista is scheduled for the match later today: 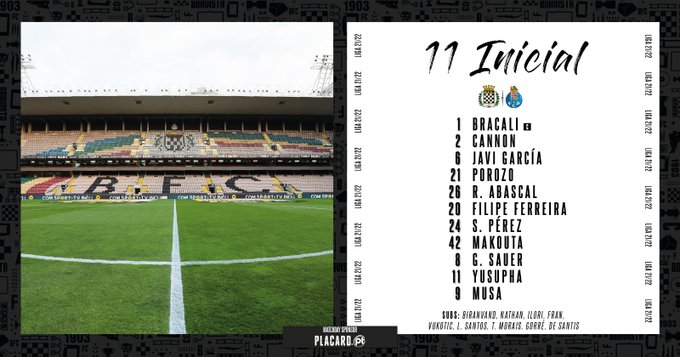 Porto is scheduled for the match later today: 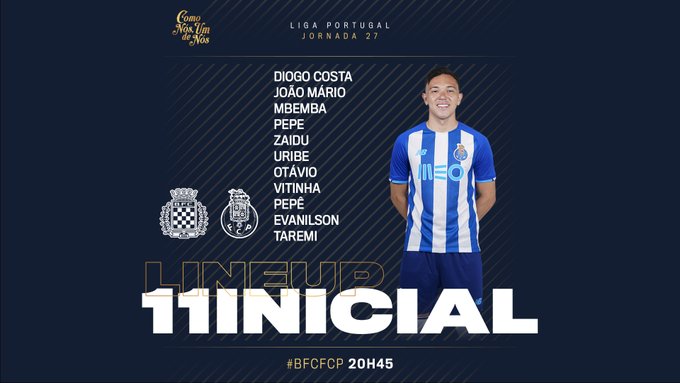 Now the broadcast of the Primeira Liga match between Boavista and Porto begins!

Do not miss a detail of the match with the live updates and commentaries of VAVEL. Follow along with us all the details, commentaries, analysis and lineups for this Boavista vs Porto match
3:40 PM2 months ago

How to watch Boavista vs PortoLive in TV and Stream

If you want to watch the game Boavista vs Porto live on TV, your options is: none.

If you want to directly stream it: Streaming services and GOLTV, RTPi, GolTV Español app.

What time is Boavista vs Porto match for Primeira Liga?

This is the start time of the game Boavista vs Porto of 20th March 2022 in several countries:

Artur Soares Dias will referee the match with Rui Licínio and Paulo Soares as assistants. João Pinheiro will be in charge of VAR.
3:25 PM2 months ago

The probable Porto for the match is: Diogo Costa, João Mário, Pepe, Mbemba, and Wendell; Vitinha, Uribe, and Otávio; Pepê, Evanilson, and Taremi.
3:20 PM2 months ago

The possible Boavista for the match is: Bracalli, Ferreira, Cannon, Porozo, Abascal and Santos; Makouta, Gorre, Sauer and Perez; Musa.
3:15 PM2 months ago

Boavista will not have Hamache and Reisinho, both injured for the match, while Porto will not be able to use Manafa, injured, in addition to the doubt of Bruno Costa, who left with pain in the last game.
3:10 PM2 months ago

Porto leads the Primeira Liga with 70 points, three ahead of second-placed Sporting and 12 ahead of third-placed Benfica. Boavista has 27 points, one behind Famalicão and one ahead of Vizela, in 13th place.
3:05 PM2 months ago

Already the Porto comes from a draw and a victory by goal. This victory was last Sunday (13), against Tondela, by 4-0, with goals from Taremi, Galeano, Fábio Vieira and Fancisco Conceição. The tie was for the Europa League, 1-1, against Lyon, which led to the elimination of the competition for Porto, after losing the first leg 1-0. In this game the goals were scored by Dembélé and Pepê.
3:00 PM2 months ago

Boavista arrives for this match after two draws in the last two games. Against Braga the draw was at home, on Saturday (5), 1-1, with goals from Riardo Horta and Yuysupha. Already against Belenenses the draw was goalless on Saturday (12).
2:55 PM2 months ago