Thank you here for your audience on another Qualifying match. Stay tuned here for the repercussions of this game. Have a good night, and see you next time!

The next round will be on Tuesday (29th), at 1:45 pm, when Portugal faces North Macedonia. Whoever wins will be in the World Cup!
5:40 PM2 months ago

And that was it! Portugal is in the next round of the playoffs and will face North Macedonia for a spot in the World Cup!
5:40 PM2 months ago

Cristiano Ronaldo received in front and hit it hard, but it hit the crossbar!

Rafael Leão got a great pass to Matheus Nunes, who came face to face with the goalkeeper and hit hard to extend the score!
5:36 PM2 months ago

In the other game

João Félix hit hard from the right, the ball deflected and fell to Cristiano Ronaldo, who shot blocked and the ball was left to Çakir
5:33 PM2 months ago

Substitution in Turkey: Kutlu goes out and Dursun comes in.
5:32 PM2 months ago

Yilmaz went for the ball and sent it VERY over the goal, missing the chance to tie the match!
5:27 PM2 months ago

Unal, in a bid in the box, ended up being kicked by José Fonte. On the field the referee did not mark anything, but after reviewing the VAR the penalty is marked!
5:24 PM2 months ago

Double substitution in Turkey: left Çelik and Kokçu to enter Yazici and Tokoz. And in Portugal left Bruno Fernandes and entered Willian Carvalho.
5:19 PM2 months ago

Demiral is yellow carded for pulling Otávio on the counter-attack.
5:18 PM2 months ago

Guerreiro lifted the ball into the box and Otávio headed the ball hard, but it went to the right side of the goal!
5:14 PM2 months ago

Substitution in Portugal: Diogo Jota is out and João Félix is in.
5:13 PM2 months ago

Yellow card to Çalhanoglu, for a midfield foul on Portugal's counter-attack.
5:11 PM2 months ago

Substitution in Turkey: Akturoglu is out and Unal is in.
5:09 PM2 months ago

In a great exchange of passes Akturoglu got the pass to Yilmaz, who came out in the face of Diogo Costa and hit a low shot to the bottom of the goal!
5:01 PM2 months ago

Dalot managed to get a grip on the right, raised in the area and Diogo Jota managed to shoot, but sent it over the goal.
4:59 PM2 months ago

Diogo Jota was launched and, on the wrong exit of Çakir outside the area, he hit over the empty goal!
4:51 PM2 months ago

Diogo Jota hit a hard shot from outside the area and Çakir deflected it into the right corner!
4:49 PM2 months ago

Cristiano Ronaldo makes his first touch on the ball and it's off to the start of the second half!
4:49 PM2 months ago

With no changes, Portugal and Turkey return to the field to start the second half of the match!

With goals from Otávio and Diogo Jota, Portugal goes through the phase with victory and goes to the playoff final!
4:29 PM2 months ago

Otávio received on the edge of the area and crossed high for Diogo Jota, at the second post, to head and send it into the back of the goal, with no chance for Çakir
4:21 PM2 months ago

Yellow card to Çelik and Diogo Jota, for a little confusion in the Portugal defense field.
4:17 PM2 months ago

Bruno Fernandes, in a free-kick in the intermediate area, raised in the area and Cristiano headed the ball to the left side of the goal!
4:13 PM2 months ago

Kokçu's strong shot, from the right, that invaded the area passing through the defenders, Diogo Costa was forced to pick up the corner!
4:11 PM2 months ago

Yilmaz hit a hard shot from outside the area and sent it through the right side of the goal!
4:08 PM2 months ago

Akturoglu got the ball on the right from a great pass, he lifted it into the box and Kutlu headed it down to the ground and sent it through the right side of the goal!
4:06 PM2 months ago

When Portugal Under made a mistake, he shot, but Diogo Costa got his hands on it.
4:02 PM2 months ago

Bernardo Silva's strong shot from outside the area exploded off the right post. In the rebound Otávio was there to fill his foot and it deflected off the goalkeeper, but still going to the bottom of the goal!
3:58 PM2 months ago

Cristiano hit it hard, but in the middle of the goal and in the hands of Çakir.
3:57 PM2 months ago

Bruno Fernandes raised the ball in the area and Diogo Jota threw himself on it, but, in the small area, he sent it over the goal!
3:55 PM2 months ago

As expected, it is a tense start to the game, with no chances and Portugal trying to launch itself into attack.
3:46 PM2 months ago

Yilmaz makes the first touch on the ball and it rolls into the first leg of the playoff! Remember that if there is a tie we will go to extra time and if the tie stays the penalty shootout!
3:42 PM2 months ago

Now the national anthems are played before the ball starts to roll!

With only one game, the qualifying playoffs start today and qualify for the next - and final - stage all teams today. Poland is already in the final for a place in the World Cup because of Russia's exclusion from FIFA competitions. The match between Scotland and Ukraine was postponed also because of the War and has no confirmed date yet.

The players take to the field of the Estádio do Dragão to start their warm-up exercises.
3:01 PM2 months ago

Turkey is lined up and will play with: 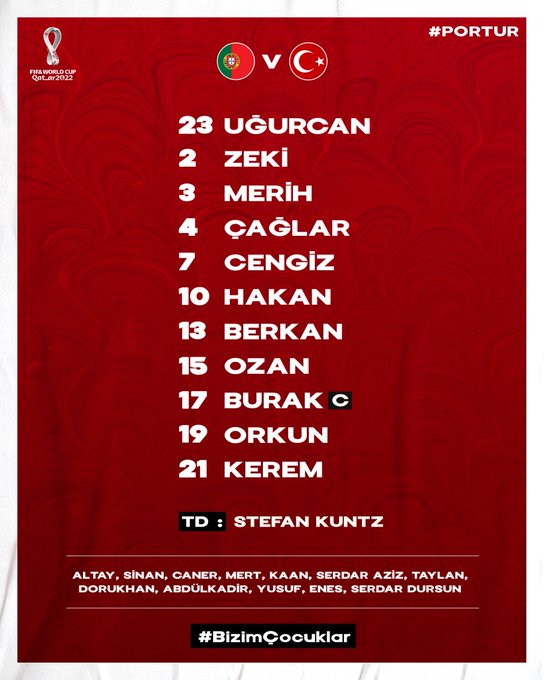 Portugal is lined up and will play with: 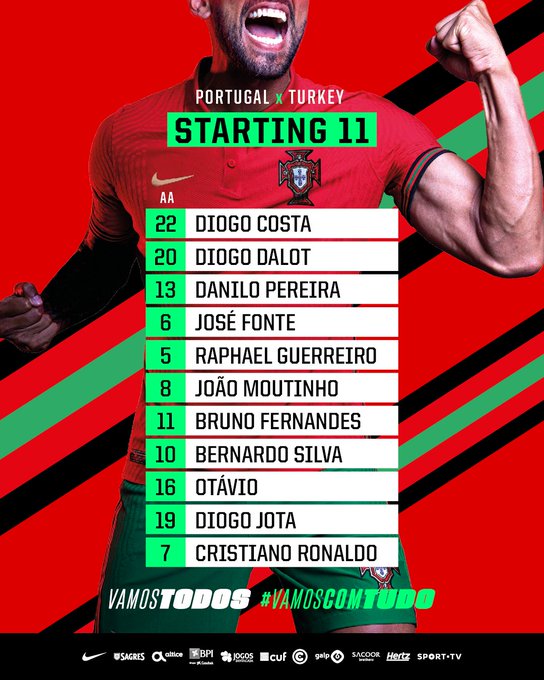 Now begins the broadcast of the World Cup Qualifying playoff match between Portugal and Turkey!

Do not miss a detail of the match with the live updates and commentaries of VAVEL. Follow along with us all the details, commentaries, analysis and lineups for this Portugal vs Turkey match.
2:41 PM2 months ago

How to watch Portugal vs Turkey Live in TV and Stream

If you want to watch the game Portugal vs Turkey live on TV, your options is: ESPN2.

What time is Portugal vs Turkey match for FIFA World Cup Qualifiers?

This is the start time of the game Portugal vs Turkey of 24th March 2022 in several countries:

Daniel Siebert will referee the match, with assistant referees Jan Seidel and Rafael Foltyn. Marco Fritz will be in charge of VAR, with the entire team coming from Germany.
2:26 PM2 months ago

The probable Turkey team to take the field is: Çakir, Celik, Soyuncu, Demiral and Erkin; Under, Çalhanoglu, Antalyali and Akturoglu; Yilmaz and Yazici.
2:21 PM2 months ago 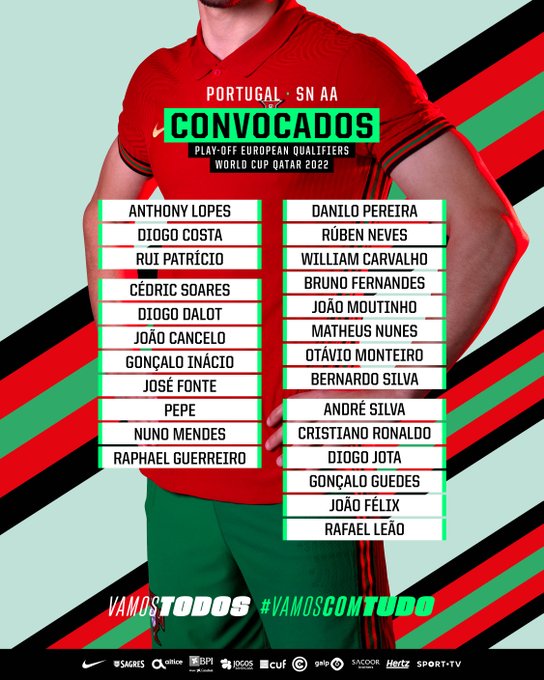 Fernando Santos will not be able to use only two players: Rúben Neves and Pepe. The midfielder is injured and the defender has tested positive for Covid-19. Stefan Kuntz, on the other hand, has no absences for the match.
2:11 PM2 months ago

Portugal went through group A, where Serbia led with 20 points. Portugal was second with 17, along with Ireland and Luxembourg with nine and Azerbaijan with one. Turkey was also second in group G, with 21 points, while the Netherlands came first with 23. Norway closed the qualifying round with 18 points, followed by Montenegro with 12, Latvia with nine, and Gibraltar with no points earned.
2:06 PM2 months ago

Turkey, on the other hand, went for the spot. On November 13, Turkey thrashed Gibraltar 6-0, with goals from Akturoglu, Dervisoglu (2), Demiral, Dursun, and Muldur. Three days later, Turkey visited Montenegro and won 2-1, with Beciraj opening the scoring, Akturoglu equalizing and Kokçu coming back to score.
2:01 PM2 months ago

Portugal comes into this playoff on the back of a scoreless draw with Ireland, which took place on November 11 last year, and a 2-1 loss to Serbia, which took place on the 14th. The goals in this second match were Renato Sanches, opening the scoring for Portugal, Tadic equalizing and Mitrovic coming back in the last minute of the match.
1:56 PM2 months ago