Thank you all for joining us in this intense duel with an exciting ending, it has been a pleasure to be with all of you. See you all again!
9:38 PM2 months ago

END OF THE GAME: URUGUAY WILL BE IN THE 2022 WORLD CUP

Change in the Peruvian attack; Lapadula, who had several chances, leaves, Valera enters to look for the equalizer, and Calcaterra enters for Cueva.

Defensive change by the local team, Luis Suárez leaves and Lucas Torreira  enters in his place;

Tapia's shot, from outside the area, but the ball hits a rival defender and will be kicked to the Peru national team.
9:10 PM2 months ago

Facundo Pellestri receives the first card of the match after cutting off a counter-attack.
9:05 PM2 months ago

Another change in Peru

Clear opportunity for Peruvians; after Fede Valverde's foul, they will have a shot from very close to the goal;
9:00 PM2 months ago

Gonzales enters the field to replace Yotun
8:49 PM2 months ago

The 22 players returned to the field of play
8:38 PM2 months ago

This was the first goal of the game

Gimenez's cross was headed by Gimenez, but the ball went over the crossbar, but the rebound fell to De Arrascaeta, who sent the ball into the back of the net to put Uruguay ahead.
8:21 PM2 months ago

Fede Valverde's shot that the Peruvian goalkeeper sends to córner the ballón
8:16 PM2 months ago

Advincula shot from far away, but the shot went over the goal;
8:11 PM2 months ago

Luis Suárez's cross, which did not find a finisher by little
8:06 PM2 months ago

Good long pass from Tapia to Lapadula, but Godin protected the ball and it ended up going out.
8:01 PM2 months ago

Uruguay's mistake at the start ended with Lapadula's shot, but Rochet made a save to send the ball into the corner.
7:56 PM2 months ago

Carillo's cross to Lapadula that was headed by Uruguay's goalkeeper, but the Uruguay goalkeeper made a save
7:51 PM2 months ago

After observing a minute's silence for those killed by COVID-19, the referee called the start of the game.
7:46 PM2 months ago

In five minutes the match kicks off, the 22 players are already ready to take the field in the tunnel.
7:41 PM2 months ago

The Atlético de Madrid striker has scored seven goals in the qualifiers for Qatar 2022, being the second highest scorer of this phase, tied with Lautaro and Neymar.
7:36 PM2 months ago

Peru is not good at Monteveido, however.

They have won only once in their last 17 visits to the Uruguayan capital, with a record of eleven defeats, five draws and one win.
7:31 PM2 months ago

Peru, the third best away performance

The Peruvian national team, with 10 points, is the third best visitor, only behind Argentina and Brazil, which are the top two teams in the ranking.
7:26 PM2 months ago

This is Peru's starting eleven

Rochet and Nuñez the main novelties in Uruguay's eleven

In 1 hour, the duel between Uruguay and Peruvian national team will start, both the preview and the minute-by-minute coverage can be followed here on VAVEL

In 1 hour the duel between South Korea and Iran will begin, both the match and the previous one can be followed here on VAVEL
7:06 PM2 months ago

Where and how to watch Uruguay vs Peru ?

The match of the Tennis between Uruguay vs Peru will start 19:30 . E.T. and couldá be followed on TENNIS TV

However,  a good option is to follow it through ;VAVEL

What time is the Uruguay vs Peru game ?

This is the kickoff time for they match on Marzh 25 in several countries:

Source: Uruguay. The players of Uruaguay in the last training session before the match. 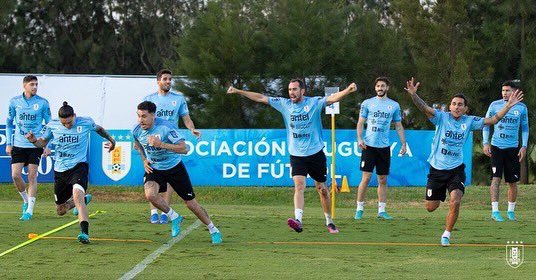 This is the summary of the last meeting between Uruguay and Peru.

How does Peru arrive ?

Peru in this beginning of 2022 defeated Colombia thanks to a goal by Flores five minutes from the end and  they added a draw against Ecuador. They have not lost an official match since October 15, 2021 where they lost against the Argentina national team thanks to a goal by Lautaro Martinez. Peru is fifth in the standings with 21 points and right now they would play a Play-Off to dispute the World Cup, but they depend on themselves to qualify directly. However, they also have to be careful at the back, as Chile is only two points behind;
6:41 PM2 months ago

How does Uruguay arrive ?

Venue: The match will be played at the Centenario Stadium, located in Montevideo. It was inaugurated in 1930 and has a capacity for . 60,235 spectators.

Uruguay and Peru will meet in the seventeenth match for South American qualification for the Qatar 2022 World Cup.
6:21 PM2 months ago

Welcome to VAVEL.COM's LIVE coverage of the match between Uruguay and Peru in the qualifiers for Qatar 2022.

My name is Manuel Carmona Hidalgo and I will be your antifriacute; n for this match. We will offer you the pre-match analysis and news here&iacute; live from VAVEL.