Thank you here for your audience on another Qualifying match. Have a nice day and see you next time!

With goals from Azmoun and Jahanbakhsh, Iran wins and closes the World Cup qualification with a victory! Now only United Arab Emirates and Iraq fight for the playoff spot to face Australia!

Substitution in both teams. In Lebanon left Haidar and entered Ataya. And in Iran left Moharrami and entered Esmaeilifar.
9:17 AM2 months ago

Iran substitution: Jahanbakhsh is out and Hossein is in.
9:09 AM2 months ago

Replacement in Iran: Gholizadeh left and Torabi came in.
9:03 AM2 months ago

On the long pass Jahanbakhsh received in front, dominated taking out the defender and hit, with a cover, in the left corner, to extend the score!
9:02 AM2 months ago

Double substitution in Lebanon: El Helwe and Kdouh left to enter Al Zain and Darwich.
8:59 AM2 months ago

The game remains sluggish in the second half, with neither team getting forward to score goals.
8:46 AM2 months ago

Azmoun got a good pass in the middle to Jahanbakhsh, but he finished over Matar!
8:39 AM2 months ago

El Helwe risked his shot from outside the area and sent it through the right side of the goal!
8:37 AM2 months ago

Azmoun makes the first touch and the ball is already rolling for the second half of the match!
8:37 AM2 months ago

The teams reappear on the field to start the second half of the match. And Iran have had a double substitution: Ezatolahi and Sayyadmanesh are out for Sarlak and Mehdipour.

With a goal by Azmoun, Iran is beating Lebanon and taking away the visitors' chance to dream of a playoff spot!
8:17 AM2 months ago

Kdouh got Lebanon's first shot of the game, but it fell into the hands of Beiranvand.
8:14 AM2 months ago

Yellow card to Haidar, for a tackle on Nourollahi that made even the number eight shout.
8:09 AM2 months ago

And the move and the goal came! On a pass through the middle from Noorafkan, who tore through the Lebanese defense, Azmoun managed to finish low, in the left corner, with no chance for Matar, opening the score!
8:06 AM2 months ago

Iran is in control of the game, as expected. The home team goes forward and doesn't let Lebanon breathe, which barely gets past midfield, but manages to prevent Iranian playmaking.
7:52 AM2 months ago

Jahanbakash hit it hard from outside the area and Matar put it for a corner save in the right corner! The corner was taken and there was an attacking foul.
7:47 AM2 months ago

Mansour, a little earlier, felt an injury on his own and was replaced, with Chaitou coming on in his place. And at that moment Ezatolahi was yellow-carded for going up with his arm open and hitting his opponent, this in the middle of the field.
7:39 AM2 months ago

Azmoun had the first shot of the game, but he sent it over the goal and without danger to Mostafa Matar.
7:32 AM2 months ago

Kdouh makes the first touch on the ball and it rolls into the first half of the match!
7:29 AM2 months ago

Before the ball starts to roll, the national anthems of Iran and Lebanon are played.

The players take the field to start the match!

MMore of the lineups! 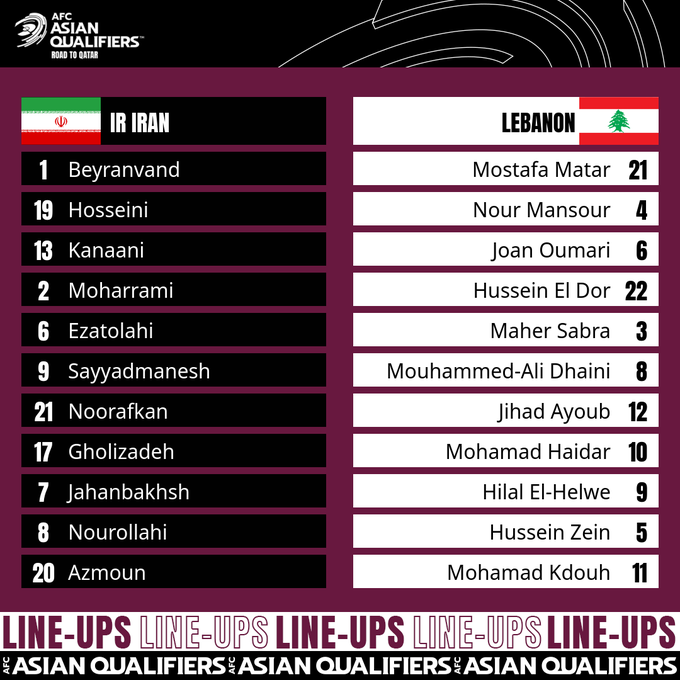 There are six qualifying matches today. In Group A, with all of them being decisive for the playoffs, besides this one, we have United Arab Emirates-South Korea and Syria-Iraq. In Group B, just rounding off the schedule, Japan faces Vietnam, Oman plays China, and Saudi Arabia faces Australia.
6:59 AM2 months ago

The players take to the field to begin their warm-up exercises.

And Lebanon is also lined up and will field: Matar, El Dor, Nour, Oumari and Sabra; Ali Dhaini, Ayoub, El Helwe, Haidar and El Zein; Kdouh.
6:42 AM2 months ago

Now begins the broadcast of the World Cup Qualifying match between Iran and Lebanon!

Do not miss a detail of the match with the live updates and commentaries of VAVEL. Follow along with us all the details, commentaries, analysis and lineups for this Iran vs Lebanon match.
6:27 AM2 months ago

How to watch Iran vs Lebanon Live in TV and Stream

If you want to watch the game Iran vs Lebanon live on TV, your options is: none.

What time is Iran vs Lebanon match for FIFA World Cup Qualifiers?

This is the start time of the game Iran vs Lebanon of 29th March 2022 in several countries:

Meanwhile the possible Lebanon team for the match is: Matar, Sabra, Al Zein, Oumari and El Zein; Ayoub, Dhaini and Haydar; Matar, Assi and Kdouh.
6:12 AM2 months ago

The possible Iran team for the match is: Abezadeh, Gholami, Kannani, Hosseini and Mohammadi; Gholizadeh, Hajsafi, Noorafkan, Nourollahi and Amiri; Azmoun.
6:07 AM2 months ago

Iran will not be able to use Jahanbakhsh, Ghoddos, and Taremi, all of whom tested positive for Covid-19, while Khalilzadeh is a doubt. Lebanon, on the other hand, has only Assi, who went out injured in the last game, but may end up playing, as expected.
6:02 AM2 months ago

In Group B we already have all the situations defined. Japan leads the group with 21 points, followed by Saudi Arabia, with 20. Australia is in the playoffs with 15 points. Already eliminated are Oman, China, and Vietnam, with 11, six, and three points.
5:57 AM2 months ago

South Korea leads group A of the Asian Qualifiers with 23 points earned, compared to 22 for Iran, which is just below them. In the race for the play-off spot we have the United Arab Emirates with nine points, third and qualifying at the moment, against Iraq with eight points and Lebanon with six points, all still having chances to qualify. Syria, on the other hand, has five points and is out of the competition.
5:52 AM2 months ago

Lebanon, on the other hand, has two losses and a draw in its last matches. On January 27 the defeat was 1-0 to South Korea. After that Lebanon played on February 1st and drew 1-1 with Iraq. And last Thursday (24th) Lebanon was beaten by Syria 2-0.
5:47 AM2 months ago

Iran comes into the match after two wins and one loss in their last matches. Against Iraq the victory was 1-0 on January 27. After that on February 1, Iran beat UAE 1-0, and finally, against South Korea last Thursday (24th), they lost 2-0.
5:42 AM2 months ago