Reactions in Argentina on facing Mexico

Thank you for following the World Cup draw broadcast on VAVEL. See you next time.
1:19 PM2 months ago

Mexico will open the World Cup against Robert Lewandowski's Poland, then will face Messi's Argentina and will close against Saudi Arabia.
1:14 PM2 months ago 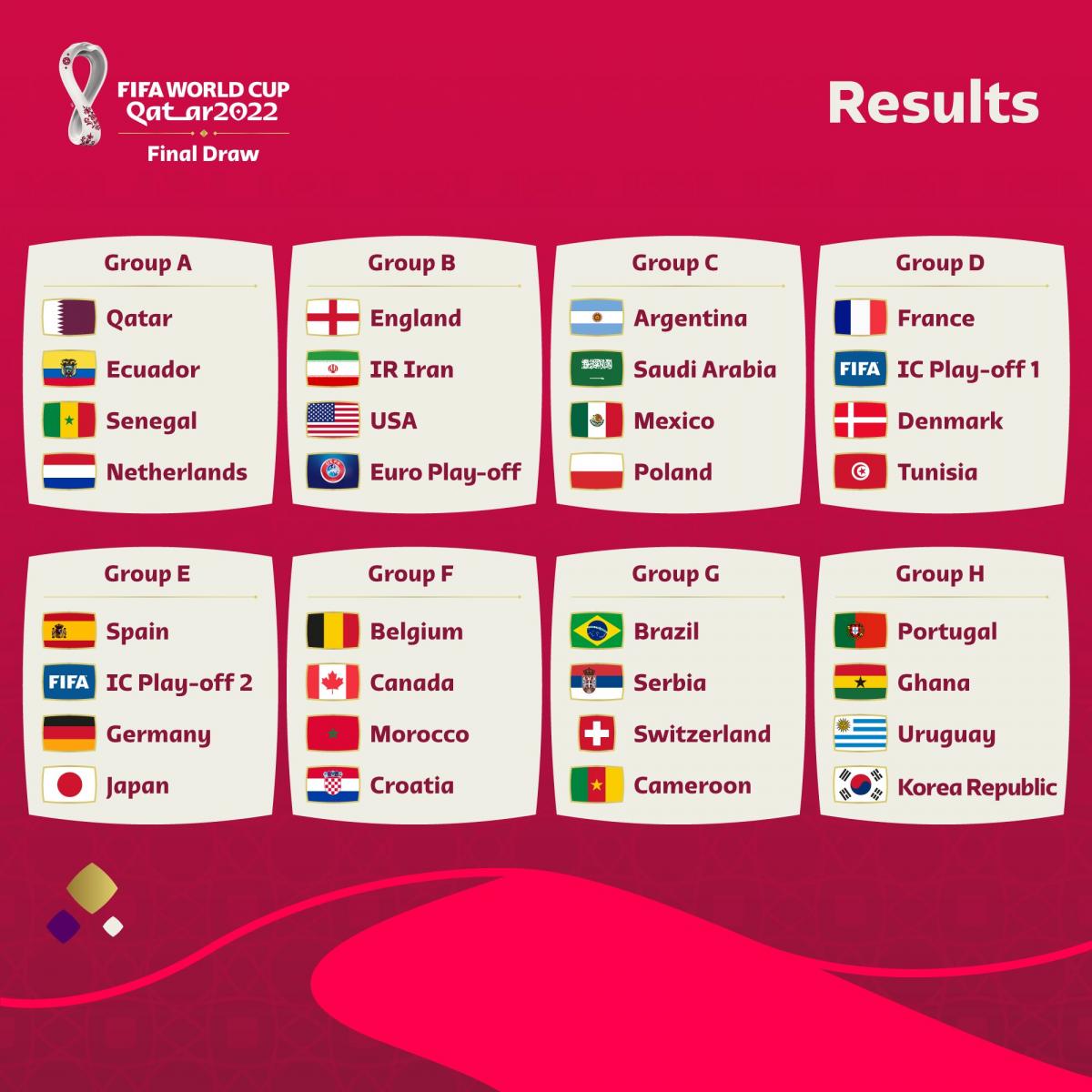 Canada is the last to leave and will be playing Belgium, Morocco and Croatia.
1:04 PM2 months ago

Ghana goes to the last sector with Portugal, Uruguay and South Korea.
12:59 PM2 months ago

Cameroon to Group G with Brazil, Serbia and Switzerland.
12:54 PM2 months ago

Ukraine/Wales/Scotland will be in Group B with the United States, Iran and England.
12:49 PM2 months ago

Costa Rica or New Zealand go to Group E along with Spain, Germany and Japan.
12:44 PM2 months ago

Qatar vs Ecuador will be the opening match of the World Cup.
12:34 PM2 months ago

Peru, UAE or Australia will be in Group D in the second place.
12:29 PM2 months ago

South Korea to Group H with Portugal and Uruguay in fourth place.
12:24 PM2 months ago

Morocco goes against Belgium and Croatia in place three.
12:19 PM2 months ago

Japan to Group E with Spain and Germany in fourth place.
12:14 PM2 months ago

Tunisia will go to the France and Denmark sector in position four.
12:09 PM2 months ago

Serbia goes to Group G with Brazil and Switzerland and will be in second place.
12:04 PM2 months ago

Poland goes to Group C with Argentina and Mexico, in place 4.
11:59 AM2 months ago

Senegal goes to Group A in third place.
11:54 AM2 months ago

Switzerland goes to group G along with Brazil and will be in third place.
11:44 AM2 months ago

Uruguay goes to Group H, because it cannot be in Group G, and will be in third place.
11:39 AM2 months ago

Croatia goes into Group F in fourth place.
11:34 AM2 months ago

Germany goes to Group E in third place.
11:29 AM2 months ago

Denmark goes to Group D in the third place position.
11:24 AM2 months ago

The United States goes to Group B in third place.
11:14 AM2 months ago

The Netherlands goes to Group A in fourth place.
11:09 AM2 months ago

Portugal is the last to leave and goes to Group H as first place.
11:04 AM2 months ago

Argentina to Group C in first place.
10:39 AM2 months ago

England goes to Group B in first place.
10:34 AM2 months ago

At this moment, the World Cup draw begins after the explanation given: Qatar is placed in Group A in the first place.
10:29 AM2 months ago

At this moment, the presentation of the guests, who were former soccer players, among them: Cafú, Bombocha, Mala, Bora Milutinovic.
10:24 AM2 months ago

Jermaine Jenas, Samantha Johnson and Carli Lloyd are on stage and will conduct the World Cup draw, where the drums have already been installed.
10:19 AM2 months ago

On stage is France's champion coach Didier Deschamps, who also won the World Cup as a player.
10:14 AM2 months ago

This will be the official mascot of the World Cup, called LA'EEB. 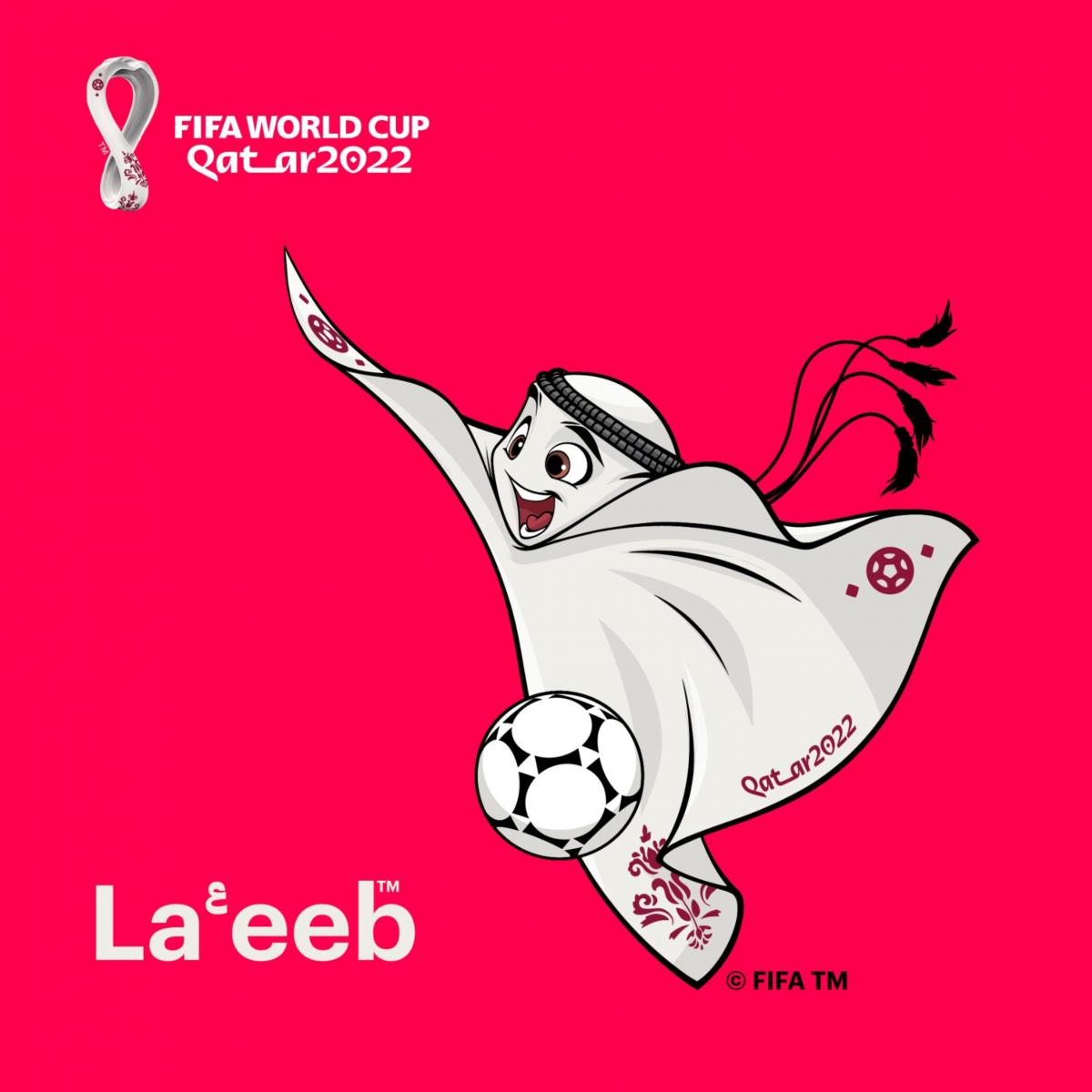 Infantino called on the world to stop the war and for the world to seek peace, specifically because of what is happening between Ukraine and Russia.
10:04 AM2 months ago

Gianni Infantino, the FIFA president, has taken the stage to say a few words and express his excitement for Qatar to host the World Cup for the first time.
9:59 AM2 months ago

The official song of the Qatar 2022 World Cup called Hayya Hayya (Better Together) is unveiled.
9:54 AM2 months ago

Idris Elba and Chowdhury make their presentation at the convention center to usher in the start of the World Cup Draw.
9:49 AM2 months ago

They do not want to face it

Roberto Martínez, Belgium's technical director, pointed out that Mexico is a very tough country and a classic in World Cups, which is why he hoped they would not meet them in the group stage.
9:44 AM2 months ago

The World Cup draw ceremony has just begun with a lively presentation on the history of some of the World Cups.
9:39 AM2 months ago

Seven of the eight world champion teams qualified for this edition, remembering that Italy was the only country that did not make it:

Minutes away from the World Cup draw, we remind you of the draw for Qatar 2022:

These have been the last group stage opponents for Mexico's national team:

On June 13, two of the three playoffs will be played on World Cup grounds:

After missing the Russia 2018 World Cup, the United States' golden generation will be at Qatar 2022, although they qualified as third place in CONCACAF behind only leaders Canada and Mexico.
9:14 AM2 months ago

The arrival of the Mexican delegation

Yon de Luisa and Gerardo Torrado are some of the members of the Mexican team that are already in Qatar for the World Cup draw, remembering that coach Gerardo Martino was unable to make the trip due to medical issues:

It will also be the second time that an Asian country will host the World Cup. The first time was in 2002, when South Korea and Japan hosted the World Cup, where Brazil won its last championship after defeating Germany in the final.
9:04 AM2 months ago

The best according to FIFA

This Thursday FIFA announced the last ranking before the draw for the World Cup, highlighting that Italy is in the top 10 and could not achieve its qualification; in addition, Mexico finished ninth but, as host Qatar, it was not enough to top the group:

France and Croatia, with victory for the gal team, was the last final disputed in the World Cup in Russia 2018, can both teams repeat for the 2022 edition?

It should be noted that only three players in history have been able to play in five World Cups, including two Mexicans, Rafa Márquez and Antonio Carvajal.
8:49 AM2 months ago

Stars Lionel Messi and Cristiano Ronaldo will be playing in the fifth World Cup of their careers, which could very likely be their last, with the goal of transcending and reaching the World Cup.
8:44 AM2 months ago

The stars are arriving

The various world stars are beginning to make their appearance in Qatar, among them Brazil's Kaka and Italy's Andrea Pirlo. 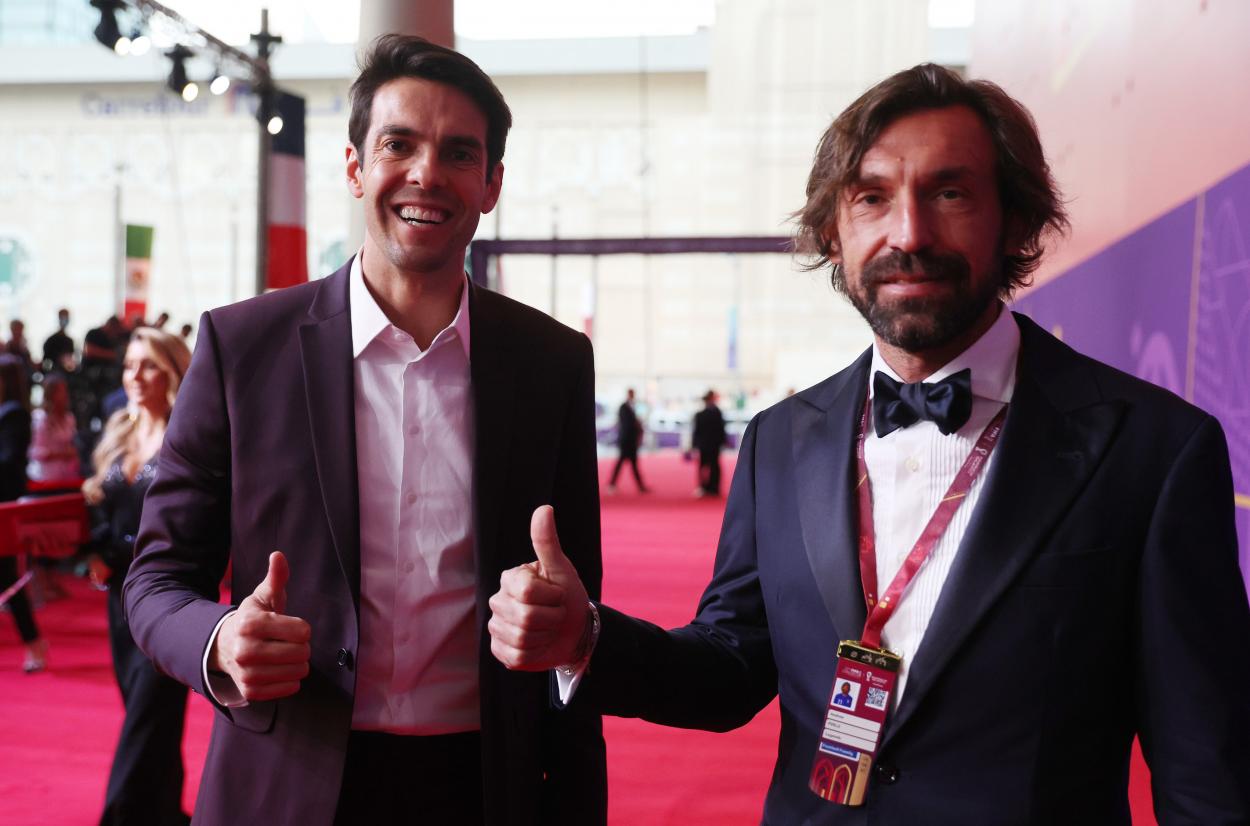 Gianni Infantino, FIFA president, stated that they never proposed a World Cup every two years and this proposal was made based on some suggestions made to them:

"It will be clear: FIFA did not propose the biennial World Cup. The Congress asked to study the feasibility. But FIFA has not proposed anything. And the conclusion was reached that it is feasible and that it would have certain consequences and certain impacts. Now," he continued, "the next phase begins, the phase of consultations, of debate, of finding agreements and compromises. With the federations, the leagues, the players," he commented at the 72nd FIFA Congress.

For the first time

With just over an hour to go before the draw for the Qatar 2022 World Cup to determine the future of the different national teams in the group stage, we begin our VAVEL coverage of the big event.
8:24 AM2 months ago

Top seeds will be number one

All the countries placed in Pot 1 will be seeded, while the other pots will be drawn to determine their place in the group, so a team from Pot 4 could be placed second in the group, all this to define the schedule for Qatar 2022.
8:19 AM2 months ago

Before the last update, there was doubt as to whether Tunisia or Canada would be placed in Pot 3 as they were higher in the FIFA rankings, with the Africans finishing with more points and the Canadians being placed in the last pot.
8:14 AM2 months ago

A few days ago, the new Qatar 2022 ball was presented, which will be called Al-Rihla and has 20 leather panels and, in recognition of the other World Cups, has the balls that have been part of the World Cups on its skin. It costs approximately US$165 in Latin America.
8:09 AM2 months ago

Do not miss a detail of the match with the live updates and commentaries of VAVEL. Follow along with us all the details, commentaries, analysis and lineups for this FIFA World Cup Draw match for the Qatar 2022.
8:04 AM2 months ago

What time is FIFA World Cup Draw match for Qatar 2022?

This is the start time of the game FIFA World Cup Draw of April 1st in several countries:

Since the 1994 World Cup in the United States, Mexico and Brazil are the only teams that have always reached the round of 16. Unfortunately, the Aztecs have not been able to advance from this stage.
7:54 AM2 months ago

For the first time, the World Cup will be held at the end of the year in order to avoid the high temperatures in Qatar during the summer. The World Cup will begin on November 21 with the 32 nations divided into eight groups of four teams, where the two best teams will advance to the round of 16.

First, the teams in group 1 will be drawn as seeded teams and only the group in which they will be placed will be defined, followed by groups 2, 3 and finally 4.

Countries of the same confederation may not face each other, with the exception of Europe, where there may be two nations per sector; furthermore, teams from the same pool may not share a group.

Likewise, the possible qualifiers from the playoffs to the group stage will be considered, so the winner of Costa Rica/New Zealand, for example, will not be able to share a group with Canada, Mexico or the United States.

The other pots will be ordered according to the latest FIFA ranking, with teams from the same pot not being allowed to play each other in the group stage.

"Countries from 8th to 15th position will be in Pot 2, while those classified in positions 16 to 23 will occupy Pot 3. Finally, Pot 4 will have the teams classified from 24th to 28th, plus two places for the winners of the intercontinental qualifiers and one place for the winner of the UEFA qualifiers," FIFA informed on its official website, so it will be marked as follows.

It is foreseen that on June 14 and 14 the remaining matches will be played in a single game from Qatar to define the last teams.

For Europe, first Scotland will play against Ukraine and the winner of that series will face Wales to define the last European guest to the World Cup (days and times to be confirmed).

Meanwhile, on June 7, the United Arab Emirates will face Australia in the last Asian game and the winner, a week later, will play against Peru, the fifth-placed team in Conmebol.

Finally, Costa Rica, the fourth-placed team in CONCACAF, will look for a place against the best team in Oceania, New Zealand.

Up to this moment, 29 teams have qualified for the World Cup, where there are still three more places left to find out the last invited teams:

This Friday, the destiny of the 32 qualified nations for the Qatar 2022 World Cup will be known due to the World Cup draw, which will last approximately two hours and will take place from the World Cup grounds.
7:19 AM2 months ago

The FIFA World Cup Draw will be played at the Exhibition and Congress Center, in Doha, Qatar. The kick-off is scheduled at 12:00 pm ET.
7:14 AM2 months ago