I thank you here once again for your audience in yet another Premier League match. Stay tuned here on VAVEL for the repercussions and analysis of this game. Have a nice day and see you soon!
9:26 AMa month ago

Liverpool are back on the field on Tuesday (5), when they visit Benfica in the quarterfinals of the Champions League. And at the weekend, on Sunday, we have MANCHESTER CITY vs LIVERPOOL! Watford are only back on the field on Saturday, when they host Leeds. The visitors are not out of the relegation zone this round, while Liverpool now have 72 points against City's 70.
9:23 AMa month ago

With goals from Diogo Jota and Fabinho, Liverpool beat Watford and stay on top of the table until at least later today, when City take the field!
9:19 AMa month ago

Liverpool substitution: Thiago out, Milner in.
9:19 AMa month ago

Fabinho hit it high and hard into the right corner, with no chance for Foster, increasing the score and making the goal of tranquility in the match!
9:16 AMa month ago

And after going to the VAR, the judge reviewed the throw and saw a pull of Kucka on Diogo Jota in the area, making the penalty!
9:14 AMa month ago

Liverpool launches itself into the attack to try the goal of tranquility after being given a few scares.
9:06 AMa month ago

Liverpool substitution: Salah out, Mané in.
8:50 AMa month ago

Liverpool substitution: Jones out, Fabinho in.
8:48 AMa month ago

Yellow for Cucho Hernández, for pulling Joe Gómez in the play on the right. Henderson takes the free-kick and Diogo Jota heads it over the goal!
8:45 AMa month ago

Sarr received the release on the left, dominated in the area and found João Pedro in the middle, but he shot hard and to the left side of the goal!
8:40 AMa month ago

Jota took a chance from outside the area and sent it over the goal.
8:34 AMa month ago

Firmino makes the first touch and the ball starts to roll for the second half!
8:34 AMa month ago

The teams return to the field, unchanged, to start the second half.

Follow the leader! With Diogo Jota's goal Liverpool beat Watford and become the new leader of the Premier League!
8:16 AMa month ago

And we have the first yellow card of the game. Joe Gomez pulled Joao Pedro in midfield and stopped a counterattack, fouling him and getting the card.
8:09 AMa month ago

Robertson tried to shoot, the ball was deflected by Matip in the middle and left to Jota, who beat the goalkeeper!
8:07 AMa month ago

After the goal Liverpool kept pressing, but created little and only controlled the match.
7:54 AMa month ago

On the right side, Joe Goméz crossed after Henderson's pass and Diogo Jota anticipated the goalkeeper to head and send the ball into the back of the net. The Premier League (for the moment) has a new leader!
7:54 AMa month ago

João Pedro got a beautiful pass on the counter-attack to Kucka, who invaded the area on the left and hit hard, but over Alisson!

Cucho Hernández took a corner kick from the first post, but it was a close-range shot that was deflected into the hands of Alisson.
7:36 AMa month ago

Samir got a kick that turned into a throw-in and Sarr got the shot, but sent it dangerously over the goal!
7:30 AMa month ago

Before the ball starts to roll we have all 22 players and the referee kneeling in protest against racism. And after that João Pedro touches the ball and it rolls into the first half of the match!
7:26 AMa month ago

Tomorrow the round continues with the match between West Ham and Everton and also the meeting between Tottenham and Newcastle. On Monday (4) Crystal Palace face Arsenal, in the game that closes the round.
7:20 AMa month ago

The players appear on the field to start warming up for the match later on!
7:10 AMa month ago

Watford is scheduled and will field with: 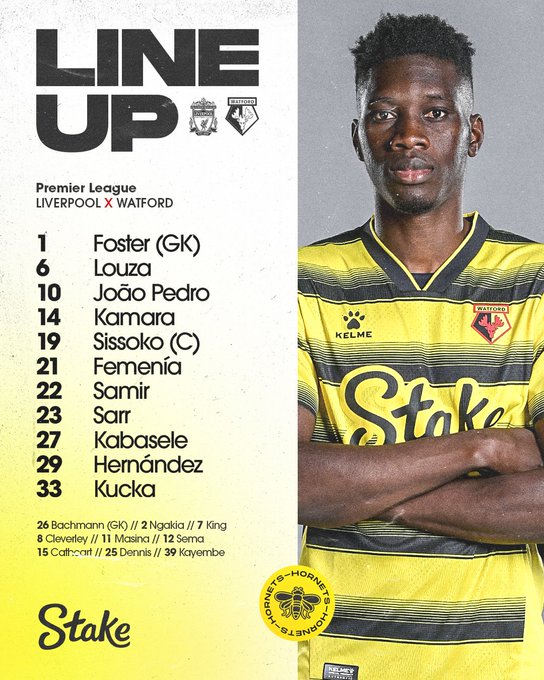 Liverpool is scheduled and will field with:

And now we go with the broadcast of the Premier League match between Liverpool and Watford!

Do not miss a detail of the match with the live updates and commentaries of VAVEL. Follow along with us all the details, commentaries, analysis and lineups for this Liverpool vs Watford match.
6:50 AMa month ago

How to watch Liverpool vs Watford Live in TV and Stream

If you want to watch the game Liverpool vs Watford live on TV, your options is: none.

What time is Liverpool vs Watford match for Premier League?

This is the start time of the game Liverpool vs Watford of 2nd April 2022 in several countries:

Stuart Atwell will be the referee at Anfield, with assistants Marc Perry and Timothy Wood.
6:35 AMa month ago

Jurgen Klopp does not know yet if he will be able to use Keita and Alexander-Arnold, with both still doubts. Roy Hodgson will be without the injured Sarr, while Nkoulou and Ngakia are doubts and could be left out.
6:20 AMa month ago

Liverpool's dream of becoming English champions this season is becoming more and more real. Manchester City leads the competition with 70 points, while Liverpool is only one point behind. Chelsea and Arsenal close the top four with 59 and 54 points, respectively. Watford, on the other hand, has 22 points and is the first team in the relegation zone, in 18th position, one point above Burnley and five above Norwich, the bottom of the competition, and three points behind Everton, the first team out of the relegation zone.
6:15 AMa month ago