Thank you for listening to this Champions League match. Good night and see you next time!

With goals from Mané, Konaté and Luis Díaz, Liverpool beat Benfica, who got a goal back with Darwin Núñez, and have the advantage of two goals for the return leg, which takes place on Wednesday (13)!

On Otamendi's mistake, Diogo Jota was released in the middle and hit hard, but Odysseas saved with his foot!
4:48 PM2 months ago

Liverpool change: Keita and Alexander-Arnold leave for Gómez and Milner.
4:46 PM2 months ago

In the pass between the defenders Luis Diaz received, took Odysseas on the goalkeeper's exit and hit the empty goal to give Liverpool back the tranquility!
4:45 PM2 months ago

Substitution in Benfica: Gonçalo Ramos out, João Mário in.
4:40 PM2 months ago

At the cross in the area Luis Díaz tried to shoot, but sent the ball to the right side of the goal. And there is a substitution in Benfica: Cebolinha left and entered Yaremchuk.
4:28 PM2 months ago

Substitution in Benfica: Taarabt left and Meité came in.
4:21 PM2 months ago

Taarabt is yellow-carded for bringing down Keita on a counterattack.
4:19 PM2 months ago

Gonçalo Ramos pulled the counterattack, found Everton in the middle and he hit hard, on the right corner, but Alisson searched and Fabinho pulled away! And now in Liverpool left: Thiago, Salah and Mané for Henderson, Diogo Jota and Firmino.
4:17 PM2 months ago

Yellow for Thiago, for bringing down Rafa Silva in the middle of the field during a counterattack.
4:09 PM2 months ago

In the right cross coming from Gilberto, Konaté broke away from the ball, let it pass and Darwin Núñez got the shot and sent it to the left corner, decreasing the score!
4:06 PM2 months ago

Darwin Núñez makes the first touch on the ball and it rolls into the second half of the match!
4:06 PM2 months ago

Without changes Benfica and Liverpool's players appear on the pitch to start the second half.

With goals from Mané and Konaté, Liverpool beat Benfica in the first half of the game and is already qualified!
3:51 PM2 months ago

Salah was released in the box and came face to face with the goalkeeper, but he beat Odysseas, who saved Liverpool!

Luis Díaz shot from outside the area and sent it through the right side of the goal, with danger for Odysseas!
3:37 PM2 months ago

Alexander-Arnold's long throw into the box Luis Díaz managed to head the ball into the middle, where Mané was, who arrived alone in the middle of the box to finish and increase the score!
3:26 PM2 months ago

Luis Díaz received in front the pass from Keita and shot over Odysseas!
3:25 PM2 months ago

Everton Cebolinha hit a shot from the left and hit the net from the outside.
3:20 PM2 months ago

In the move down the left Luis Díaz won a corner. He was lifted into the box by Robertson, who put it on the head of Konaté. He headed down into the left corner, opening the game's scoring!
3:17 PM2 months ago

Thiago hit hard from outside the area, but sent it over the goal.
3:14 PM2 months ago

Keita received in the middle, hit it hard and Odysseas deflected it to the right, where Salah returned it to the middle and the goalkeeper got it in two times.
3:12 PM2 months ago

Salah found Mané through the middle, who returned with his heel to the area, where Salah was to be stopped and win a corner kick. The corner was taken in the box and the defense took it away.
3:06 PM2 months ago

Robertson lifted the ball into the box and Keita headed it over the goal. Liverpool start pressing!
3:02 PM2 months ago

Before the ball starts to roll, the players kneel in protest against racism. And Mané makes the first touch on the ball and it rolls into the first half of the final!
2:59 PM2 months ago

And now the most beautiful anthem in the world, the Champions League anthem, is played before the ball starts to roll!

The teams appear on the field to start the first half of the match!

The first round of matches starts today and ends tomorrow, with all games at the same time. Today we have Manchester City and Atlético de Madrid. Tomorrow Villarreal face Bayern Munich and Chelsea host Real Madrid. The return matches will be next week, at the same time, on Tuesday (12) and Wednesday (13).
2:28 PM2 months ago

The players appear on the Estádio da Luz grass field to begin their warm-up work.
2:16 PM2 months ago

Liverpool is lined up and will field with:

How we line up to face @SLBenfica tonight! 👊#SLBLIV | #UCL

Benfica is lined up and will field with: 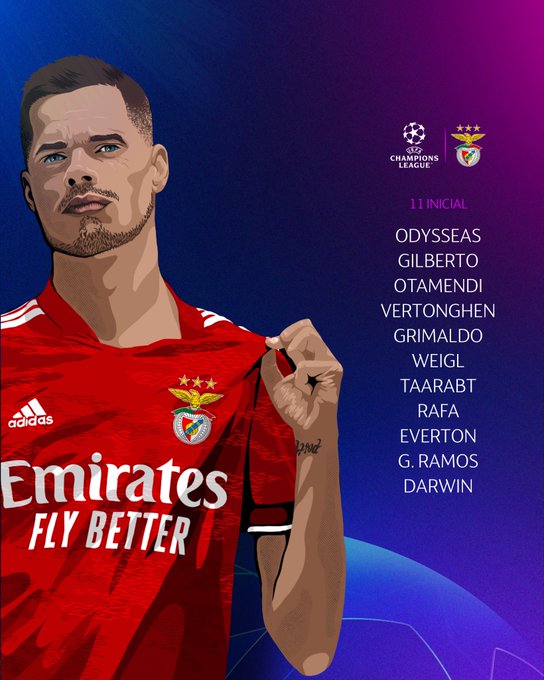 Now begins the broadcast of the match between Benfica and Liverpool, the first leg of the quarterfinals of the Champions League 2021-22!

Do not miss a detail of the match with the live updates and commentaries of VAVEL. Follow along with us all the details, commentaries, analysis and lineups for this Benfica vs Liverpool match.
1:56 PM2 months ago

How to watch Benfica vs LiverpoolLive in TV and Stream

If you want to watch the game Benfica vs Liverpool live on TV, your options is: none.

What time is Benfica vs Liverpool match for Champions League?

This is the start time of the game Benfica vs Liverpool of 4th April 2022 in several countries:

Jesús Gil Manzano will be the referee for the match, with assistants Diego Barbero and Ángel Nevado. Alejandro Hernández will be in charge of VAR, with the entire refereeing team coming from Spain.
1:41 PM2 months ago

Nelson Veríssimo will not be able to use two players: Lucas Veríssimo and Rodrigo Pinho. Both are injured and out of action, while Jurgen Klopp will be at full strength and has no absentees.
1:26 PM2 months ago

In the round of 16 Benfica beat Ajax, drawing 2-2 in Portugal and winning 1-0 in the Netherlands to qualify. Liverpool, on the other hand, beat Inter in Italy with a 2-0 victory. In the return leg Internazionale won 1-0 in England, but could not get a draw on aggregate and the Reds went through.
1:21 PM2 months ago

Liverpool, meanwhile, are coming off two wins in their last two games. In the FA Cup, before the FIFA date, the Reds beat Nottingham Forest 1-0, with a goal by Diogo Jota. And in the Premier League, last Saturday (2), Liverpool beat Watford 2-0, with goals from Diogo Jota and Fabinho.
1:16 PM2 months ago

Benfica comes into the match on the back of a win and a loss in their last few matches. Against Estoril, on March 20, before the stop for the FIFA date, Benfica won 2-1, with goals from Rafa Silva and Gonçalo Ramos, while André Franco deducted. After the stop for the FIFA date, last Friday (01), Benfica visited Braga and left the field defeated by 3-2, with Iuri Medeiros and André Horta opening the scoring and expanding, while Darwin Núñez decreased and João Mário tied, but Vitinha scored in the end and gave victory to Braga.
1:11 PM2 months ago