Thank you very much for joining us for the Copa Libertadores Alianza vs River match. Follow the sports information on VAVEL.com.
9:54 PMa month ago

Another day at the office for River Plate. The team coached by Marcelo Gallardo won by the minimum difference against a worn out Alianza Lima, which suffered the consequences of the time lost since March 12.
9:52 PMa month ago

The game is over at the Nacional de Lima.
9:51 PMa month ago

Quintero (River) header from the right side of the goal is close, but misses to the right.
9:50 PMa month ago

The judge adds four minutes of reinstatement.
9:48 PMa month ago

Red card for Marco Rodríguez (Alianza) after a fight for a foul on Robert Rojas (River).
9:44 PMa month ago

Corner for Alianza.
9:43 PMa month ago

They come out: Enzo Fernández and Nicolás de la Cruz.

Corner for Alianza.
9:41 PMa month ago

GOOOOOOOOOOOOOOL FOR RIVER, the Argentine team wins in Peru with a goal by the recently entered Matías Suárez.
9:22 PMa month ago

Quintero (River) gets in close. He shoots with his left foot from outside the box but the ball goes wide of the left post.
9:19 PMa month ago

Juanfer Quintero (River) shoots from outside the box but it ends up in the goalkeeper's hands.
9:18 PMa month ago

Foul by Valenzuela (Alianza) on Quintero (River).
9:16 PMa month ago

Ezequiel Barco (River) has a shot blocked from outside the box.
9:07 PMa month ago

First chance of the second half. Yordi Vilchez (Alianza) strikes from the center of the box.
9:05 PMa month ago

The second half begins at the Nacional de Lima.
8:54 PMa month ago

River has taken almost all the chances of the match. Perhaps in the next 45 minutes the Argentines' first will come.
8:53 PMa month ago

Jonatan Maidana (River) wins a free kick in the defensive half for a foul on Hernan Barcos (Alianza).
8:49 PMa month ago

Julián Álvarez (River) misses what could be the first for his team.
8:36 PMa month ago

Nicolás de la Cruz (River) misses a shot from the center of the box.
8:28 PMa month ago

Enzo Fernández (River) sees his shot end up in the goalkeeper's hands.
8:21 PMa month ago

Santiago Simón (River) is denied by a shot.
2:08 AMa month ago

In a few moments we will share with you the starting lineups for the Alianza Lima vs River Plate live match, as well as the latest information from the Estadio Nacional de Lima. Don't miss a single detail of the live match updates and commentary from VAVEL coverage.
2:03 AMa month ago

How to watch Alianza Lima vs River Plate Live Stream on TV and Online?

If you want to watch Alianza Lima vs River Plate live on TV, your options are: FOX and Star+.

If you want to watch it directly on streamig: Star+.

What time is Alianza Lima vs River Plate match for Copa Libertadores?

This is the start time of the game Alianza Lima vs River Plate of April 6th 2022 in several countries:

Enzo Fernández has become a key player for Marcelo Gallardo's team. The 21-year-old midfielder has an 84% passing accuracy rate and an unmatched class that makes him an outstanding player in the squad.
1:43 AMa month ago

Hernán Barcos is the goal scorer of the team. The 37-year-old Argentine scored the winning goal in the final of last year's championship and has become a leader in the Peruvian team.
1:38 AMa month ago

The two teams have met six times, all in the Copa Libertadores group stage, and the Argentine team has never lost. They have won four games and drawn two others, so today they will be looking to maintain this streak against the locals.
1:33 AMa month ago

The Argentine team is in second place in Group A of the Argentine League with 16 points. They won their last game against Defensa y Justicia with a score of 1-2. Paulo Díaz and José Paradela, will be absent due to Covid-19, and Braian Romero due to a traumatism in his left ankle.
1:28 AMa month ago

They are in 15th place in their league with only five points in six games. They lost their last game by the minimum difference, and have not played for one game due to the transport workers' strike in Peru. They are on the worst streak in the history of the Cup: 23 consecutive games without a win.
1:23 AMa month ago 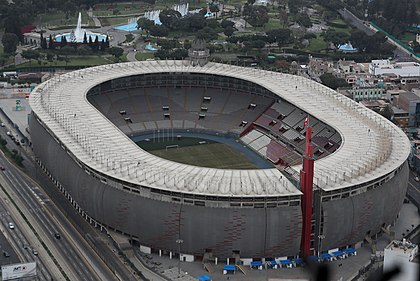 After much hesitation as to whether or not the match would be played at this venue, it has been decided that it will definitely be held at this stadium, the Estadio Nacional de Lima.

My name is Sofia Arevalo and I will be your host for this match. We will bring you pre-match analysis, score updates and live news here on VAVEL.