Thank you for following the match Inter Milan 2-0 Hellas Verona, we invite you to know everything we can offer you, until next time.
1:54 PMa month ago

The match ends with a 2-0 victory for Inter Milan who remain in the fight for the league title, Hellas Verona will remain in the mid-table of Serie A.
1:51 PMa month ago

The first yellow card of the match is shown to Denzel Dumfries.
1:42 PMa month ago

Last 10 minutes of the match and it looks like the home team will take the 3 points.
1:37 PMa month ago

The visitors made only two changes with Lasagna and Depaoli replacing Bessa and Faraoni.
1:34 PMa month ago

Inter continues to have the most clear-cut plays and goalkeeper Montipo is already the star player.
1:27 PMa month ago

Inter begins to regain control of the game to continue with the lead
1:13 PMa month ago

The game continues with the visitors looking for a goal to score the discount.
1:08 PMa month ago

Second half begins, Inter leads by 2 goals
12:49 PMa month ago

The first half ends in Inter's favor, the visitors had the discount with Simeone.
12:48 PMa month ago

Last 5 minutes of a first half that was totally controlled by Inter.
12:38 PMa month ago

Tremendous save by Handanovic to stop a Simeone one-on-one
12:33 PMa month ago

Dzeko scores to extend the lead

Inter gains confidence thanks to goal and controls the match
12:25 PMa month ago

Barella scores after a cross from Perisic's right flank.

Inter's clear shot by Perisic is well saved by the visiting goalkeeper.
12:19 PMa month ago

The match is evenly matched after a lively start by the home team.
12:14 PMa month ago

Hellas Verona manages to calm Inter's attack with possession of the ball
12:08 PMa month ago

First minutes in Inter's favor as they look to get the first early goal
12:03 PMa month ago

Hellas Verona starts with these players

Inter Milan presents its XI for the game

The leading scorers so far in Italian Calcio are Ciro Immobile and Dusan Vlahovic with 21 goals, followed by Giovanni Simeone with 16 goals.
11:25 AMa month ago

Matches of the day

Inter vs Hellas Verona, Cagliari vs Juventus, Genoa vs Lazio, Napoli vs Fiorentina, Sassuolo vs Atalanta, Venezia vs Udinese, Roma vs Salernitana, Torino vs Milan, Bologna vs Sampdoria.
11:19 AMa month ago

The mythical Giuseppe Meazza will be the venue that will host the Serie A match.
It was opened in 1926, having undergone two renovations and two extensions to have the capacity of 80,018 spectators and to host Inter, although it is the same stadium where Milan plays.
11:15 AMa month ago

After being out of continental competitions for a long time, Inter wants to return to the Champions League and have a better result than the one obtained in the last edition where they were eliminated in the round of 16 by Liverpool.
Hellas Verona is in 9th position in the championship and wants to move up positions even if they are far away from a European place.
11:10 AMa month ago

For Inter the best in assists is Nicolo Barella with 9 in the championship, but very close behind is the Turkish Hakan Calhanoglu with 8 and Edin Dzeko with 5.
For Hellas Verona it is Gianluca Caprari with 7 assists, followed by Davide Faraoni with 5 and Antonin Barak with 4.
11:05 AMa month ago

Top scorers of each squad

The best scorer of the home team is Lautaro Martinez with 14 goals and closely followed by the Bosnian Edin Dzeko who has 12 goals so far. Hellas Verona has Giovanni Simeone with 16 goals, followed by Gianluca Caprari with 10 and Antonin Barak with the same amount.
11:00 AMa month ago

In a few moments we will share with you the starting lineups for Inter Milan vs Hellas Verona live, as well as the latest information from the San Siro Stadium. Keep an eye on the action as it happens, live online at VAVEL Mexico.
10:50 AMa month ago

The match will be broadcast on ESPN and the Star+ App.
If you want to watch the match online, VAVEL Mexico is your best option.
10:45 AMa month ago

Watch out for this Hellas Verona player

Argentinian forward of 26 years, in Serie A has a record of 29 games played, 16 goals scored and 4 assists, already debuted in the same way with the selection of Argentina although he has few games, has 5 games played and 1 goal scored, will seek to give the 3 points to Hellas Verona and give the surprise of the Day 31 in Serie A.

24 year old Argentine striker, he is one of the top scorers for Inter and Argentina, in the current Serie A tournament, he has 28 games played, 14 goals scored and 2 assists and with the Argentina national team he has 37 games played and 19 goals scored, he will go to his first world cup in Qatar 2022. 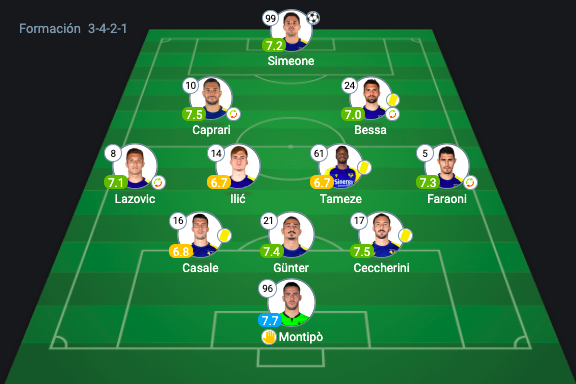 This is the latest Inter Milan lineup 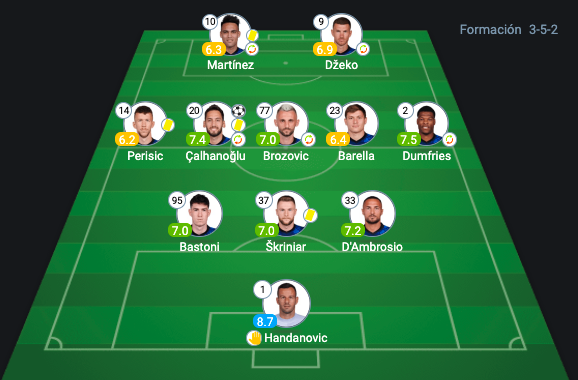 Hellas Verona: To stay in the middle of the table

For its part Hellas Verona is in 9th place with 45 points and a record of 12 wins, 9 draws and 10 defeats, if they win they would stay in 9th place, 8th place has 50 points, the main objective for Hellas will be to stay in the middle of the overall Serie A table.
10:20 AMa month ago

Inter Milan is currently in third place with 63 points, 3 points behind second place and 4 points behind first place, that's why it is so important to get 3 points at home against Hellas Verona, they have a record of 18 wins, 9 draws and 3 defeats, a very complete team with players of great quality to fight in any European tournament.
10:15 AMa month ago

Welcome to the live broadcast of the match Inter Milan vs Hellas Verona, match day 31 of the Serie A. The match will take place at the San Siro Stadium at 11:00 am.