Thank you so much for accompanying Napoli and Fiorentina at VAVEL USA. Have a great Sunday and until next time.
11:01 AMa month ago

Almost a goal! Callejon dominated inside the area and unleashed a rocket. The ball passed, taking paint off the left post of Ospina.
10:56 AMa month ago

Osimhen received inside the area, dominated in the chest and released a rocket to score a goal.
10:47 AMa month ago

Fiorentina exchange passes in the defensive field.
10:45 AMa month ago

Lozano hit a great cross and Mertens free from the mark inside the small area, headed wide. What a chance.
10:38 AMa month ago

Arthur Cabral received on the right, won the body marking, took it inside the area and finished placed in the left corner of goalkeeper Ospina. It's Viola's third.
10:34 AMa month ago

Lozano received a free-kick, passed the goalkeeper and scored the goal, but the flag had already marked the Napoli striker offside.
10:33 AMa month ago

Ikone, who had just entered, received inside the area from the left side and released a cross rocket and the ball died in the left corner of Ospina. Fiorentina in front again.
10:30 AMa month ago

Osimhen was launched by the left, which dominated and found Mertens at the entrance of the area. The Belgian dropped a bomb in the right corner of Fiorentina and tied the confrontation.
10:19 AMa month ago

Insigne won from the right wing and tried to pass to Lozano inside the area, but Biraghi took it badly and sent it to a corner.
10:14 AMa month ago

Napoli put pressure on Fiorentina, who defended from the start of the second half.
10:11 AMa month ago

Insigne took a free-kick, but the ball went out without danger.
10:11 AMa month ago

After Fiorentina's goal, Napoli can't find themselves on the pitch.
9:46 AMa month ago

Too ugly! Duncan found Nico González in the middle, who dominated, fixed and kicked away.
9:42 AMa month ago

Osimhen was launched from the right on the counterattack, but Milenkovic won on the iron foot and went out playing.
9:39 AMa month ago

Mário Rui was launched by the left, won the mark, came out in front of the goalkeeper and kicked completely wrong. What a chance Napoli missed.
9:36 AMa month ago

Possible fault with Koulibaly being analyzed.
9:34 AMa month ago

After a cross in the area, the ball fell to Ducan at the second post, who crossed again to the middle, Arthur Cabral fixed it and Nico Gonazález released the bomb with his left foot, with no chance for goalkeeper Ospina.
9:31 AMa month ago

Milenkovic was fouled hard and received the first card of the game.
9:17 AMa month ago

WRONG! Mario Rui found Fabian Ruiz inside the area with freedom to finish, but the Napoli midfielder tried the pass and the Fiorentina defense arrived first.
9:16 AMa month ago

WRONG! Mario Rui found Fabian Ruiz inside the area with freedom to finish, but the Napoli midfielder tried the pass and the Fiorentina defense arrived first.
9:08 AMa month ago

Insigne tried to pass to Osimhen inside the area, but the Fiorentina defense kept the ball.
9:02 AMa month ago 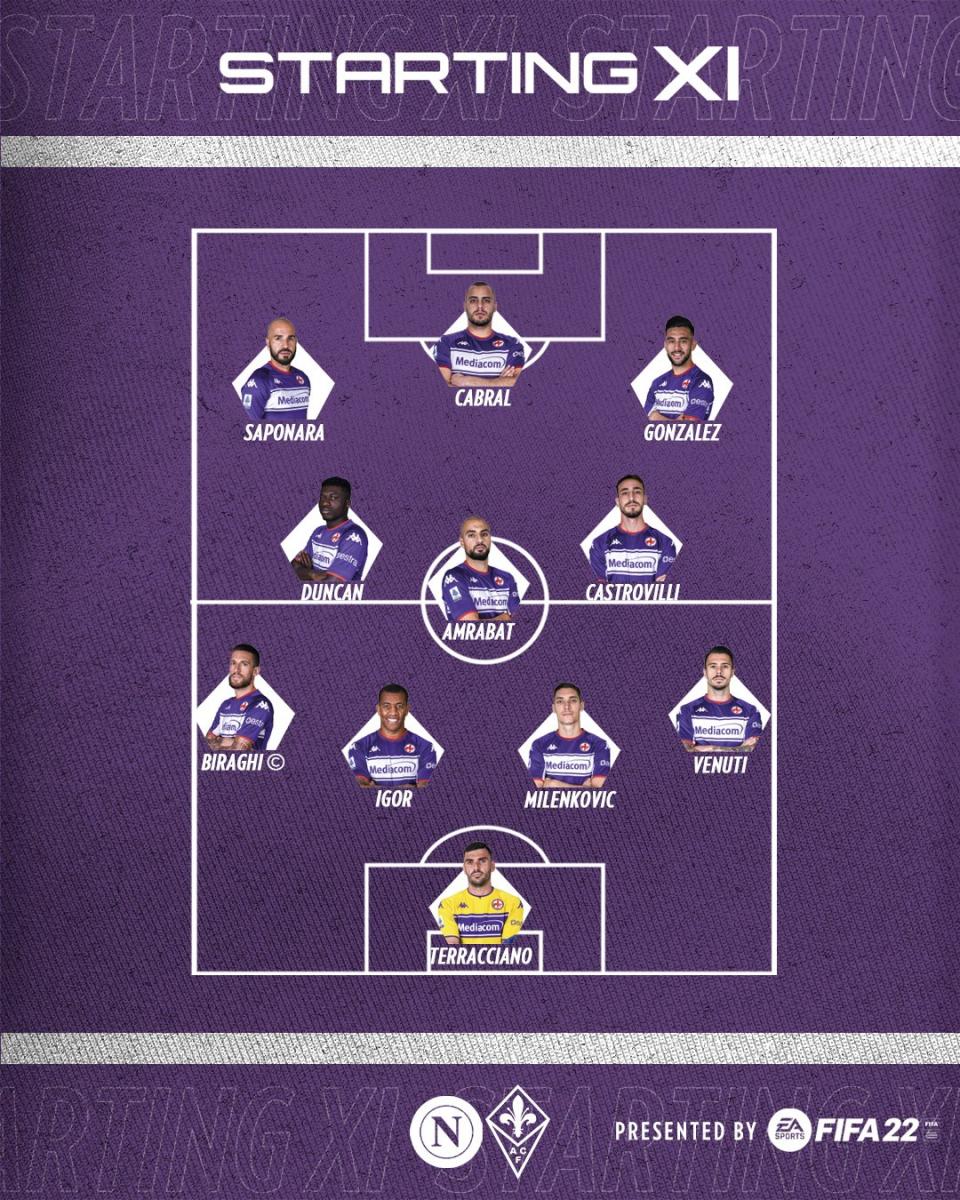 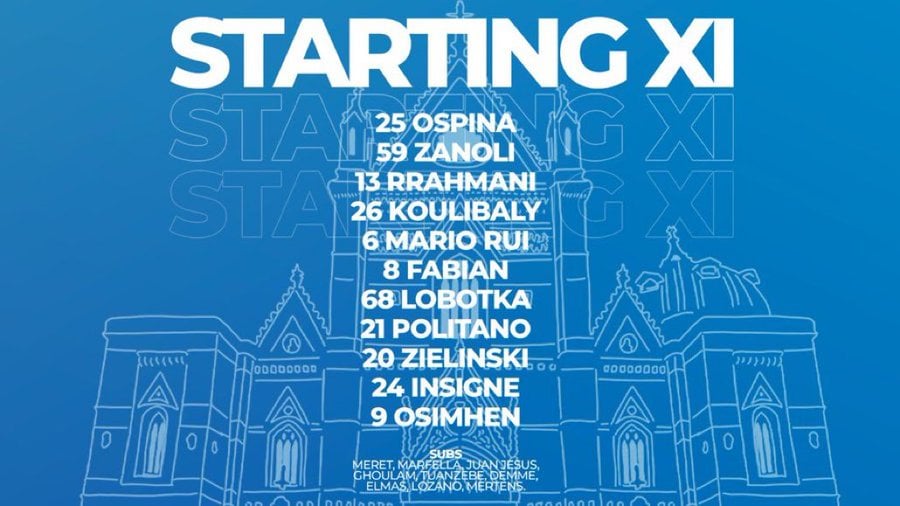 When is the Napoli vs Fiorentina game and how to follow LIVE?

Where to watch: Star+

When is the Napoli vs Fiorentina game and how to watch it LIVE and in real time?

The ball will roll this Sunday (10) at 9h am (Washington), being played at Diego Armando Maradona Stadium, in Nápolis. The arrival will be broadcast live from Star+. In addition, real-time, bid-by-bid coverage will be on VAVEL USA.
6:47 PMa month ago

The Napoli coach asked for attention with the extra team: "Fiorentina have already beaten us and are strong, but I have a group of extraordinary guys who want to fight until the end for the Scudetto."

''We have to think about the possibilities of doing our duty without looking at others. On this high ground I seriously laugh if we don't admit we're fighting championship skins and scudetto skins. We played this opportunity going our own way”, said the coach.

“A genuine group, because the professionals that are here have emergency levels, we are that means we are dealing with physical and mental guys. These guys always trained at their best and it's no accident they're getting these results,'' he said.

The coach said that from Naples it is important to compare the maize logo to the maize, because a group of professionals are genuine, because they have professional level in terms of emergency, we are here and that means that with physical and mental guys. These guys always train at their best and it's no accident that they're getting these results. I think that all those who compete are worthy of deserving. However, who deserve the most, no, are those who are the fans of Naples who are gratifying our attitude. We enter the heart of the blue people. Our stadium surrounds us. come back super- heroes.''

How does Napoli arrive?

Luciano Spalletti's team recovered well after the defeat to Milan playing at home. That's three straight wins against Hellas Verona, Udinese and Atalanta. In addition to having the third best attack in the competition with 56 goals scored, Napoli also has the best defense with just 23 goals conceded, with an average of less than one per game.

In the last 10 games, the Nápolis team has been very irregular. In that period there were five wins, three draws and two defeats, three of which were drawn in a row, which made them lose the leadership of Serie A and generated an elimination in the Europa League for Barcelona.

''We came from a good period with four consecutive useful results. The team is doing well and playing good football. It will be an exam for another stage of growth'', said the coach about the moment that Fiorentina is going through.

The coach also spoke about Amrabat's injury:  ''He is a lion, but he also has the right character to make himself available and understand the moments of the race. Ramadan? He knows how to handle it very well. He is in excellent condition.''

''The home crowd will be very large and warm, but we will also have three hundred fans who follow us from Florence, we will give everything on the field for them too. The exultation under the Fiesole curve? We wanted to beat Empoli and it was good to celebrate with the fans. From time to time I take that normality too'', completed Italiano.

How to get to Fiorentina

Viola occupies the eighth position of the Italian Championship with 50 points and a victory could make Fiorentina reach 53 points and climb to sixth position, touching once and for all the teams fighting for European competitions. The team led by Vicenzo Italiano has a good streak, as they won Bologna and Empoli, in addition to drawing with Internazionale away from home. In the last 10 games, they have won five, lost three and drawn two.
6:17 PMa month ago

Napoli fight for the 2021-22 Serie A title. It currently occupies the third position in the league with 66 points, just one behind Milan, who also plays this Sunday (10). The fierce fight is gaining strength at the end of the championship, since we are in the 32nd round. Fiorentina fights for a spot in the Europa League and Conference League.
6:12 PMa month ago

From now on, we will tell you all the emotions of Napoli x Fiorentina for the 32nd round of Serie A 2021-22. The ball will roll this Sunday (10), at 9h am, at Diego Armando Maradona Stadium, in Nápolis. Enjoy all the emotions of the Brasileirão with VAVEL USA.